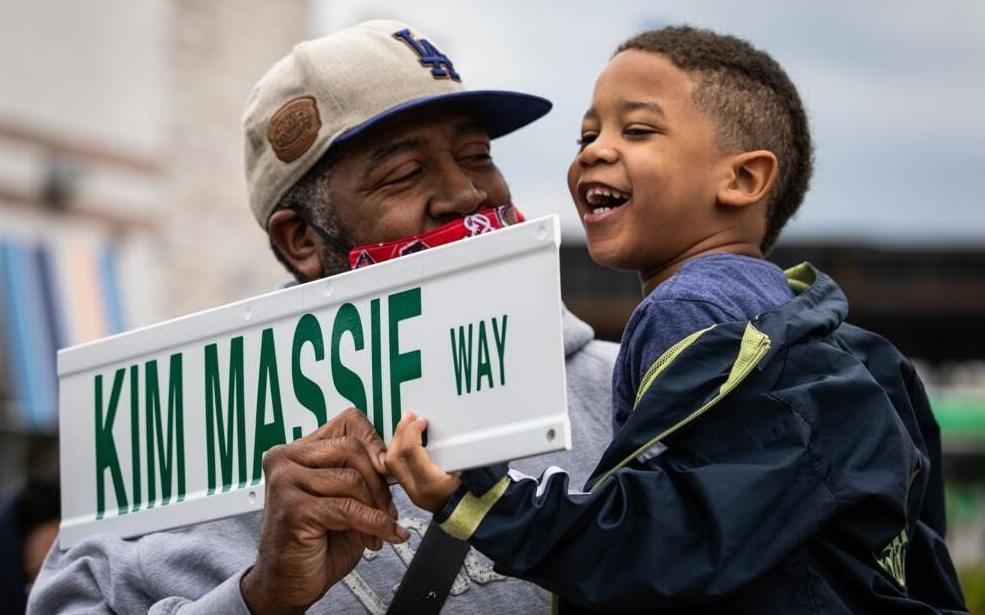 Adam Massie and Adam Massie Jr., son and grandson of Kim Massie, were all smiles at her recent street renaming and Proclamation Day ceremony at the intersection of South Broadway and Gratiot Street 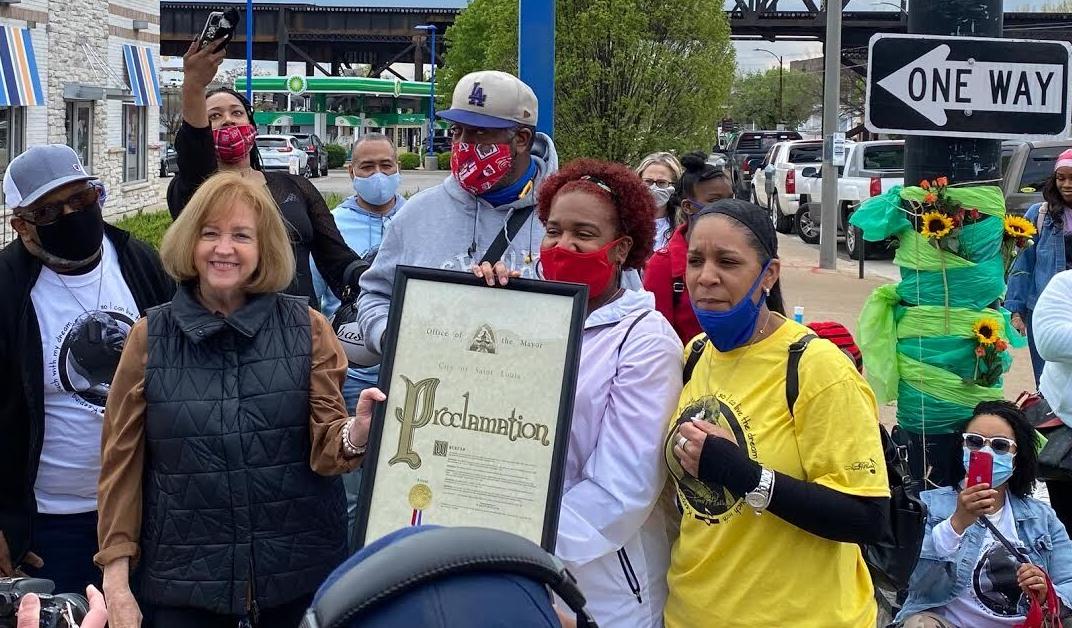 Until her death last year, Kim Massie’s award-winning powerhouse vocals were a signature staple on the St. Louis “blues triangle” of clubs along South Broadway, including the Broadway Oyster Bar, BB’s Jazz, Blues & Soups and the now-shuttered Beale on Broadway.

It only seemed right to honor her with a street named in the area she helped make famous.

And that’s what Todd Alan set out to do shortly after her death last year. The pair became longtime friends after Alan invited her to sing at several of his birthday parties over the last 12 years.

He met with Alderman Jack Coatar and former Mayor Lyda Krewson to discuss a street renaming and official proclamation day.

As a result, Kim Massie Way was recently unveiled at the intersection of South Broadway and Gratiot Street. The newly-named thoroughfare starts at Cerre Street and expands to part of South Broadway, where she regularly performed at Beale, B.O.B. and BB’s. Kim Massie Day was recognized on her birthday, April 19.

“Her passing was super tragic,” Alan said. “I wanted to do something to memorialize her, and what better way to do that then to name a street after her near the ‘blues triangle,’ since she played there regularly.”

The celebratory day included live performances by the Funky Butt Brass Brand as well as Massie’s band, Solid Senders, tributes from local artists and a ceremony led by Krewson, including memories shared by admirers.

Her daughter, Autumn Massie, was overwhelmed by the outpouring of affection.

“I really want to thank Lyda Krewson, the City of St. Louis, Jodie Gilbert, Alonzo Townsend, Funky Butt Brass Brand, and everyone who worked behind the scenes to make this possible.” Autumn said.

Brock Walker first met Massie after attending one of her shows. He ended up booking a show with her that happened to fall on the same day as his wedding, so he married in the afternoon and performed with her in the evening. After that day, they remained lifelong friends, and he became her musical director and  keyboardist for about 17 years.

“A lot of what we learned from her was camaraderie and generosity,” Walker said. “Kim showed up at everybody’s performances and gigs. If their tip jar was empty, she was the first to add something to it. She would come on stage and ask the audience to leave a tip.”

Autumn and Walker both agree that Massie’s musical influence not only had a major impact on St. Louis but also traveled worldwide. Walker recalled a time when local artist Montez Coleman had a show in Istanbul and saw a picture of Massie on the wall of a club Coleman played. That’s how far her reputation had spread.

“I knew my mother was amazing and touched lives, but the magnitude of it is overwhelming,” Autumn said. “I’m very blessed to call Kim Massie my mother, and I’ve always prided myself on that because of who she was and how she treated me. She’s irreplaceable.”

Autumn said her mother, who always made time for those who needed support, was everything to her.

“My mother was everything to my girls and me,” Autumn said. “She made my life easy, because she was just that good of a parent and an even better grandmother.”

Walker, who said Massie mentored him for many years, taught him discipline and how to read an audience. “I learned from her, and she got into the business long after I did, Walker said.

When people are driving down Massie’s street, Alan hopes people remember how special she was.

“I encourage people, when they’re driving down South Broadway, to look up at the sign, smile and remember a time when they heard Kim play over the years,” Alan said. “I want them to remember what a special person she was.”