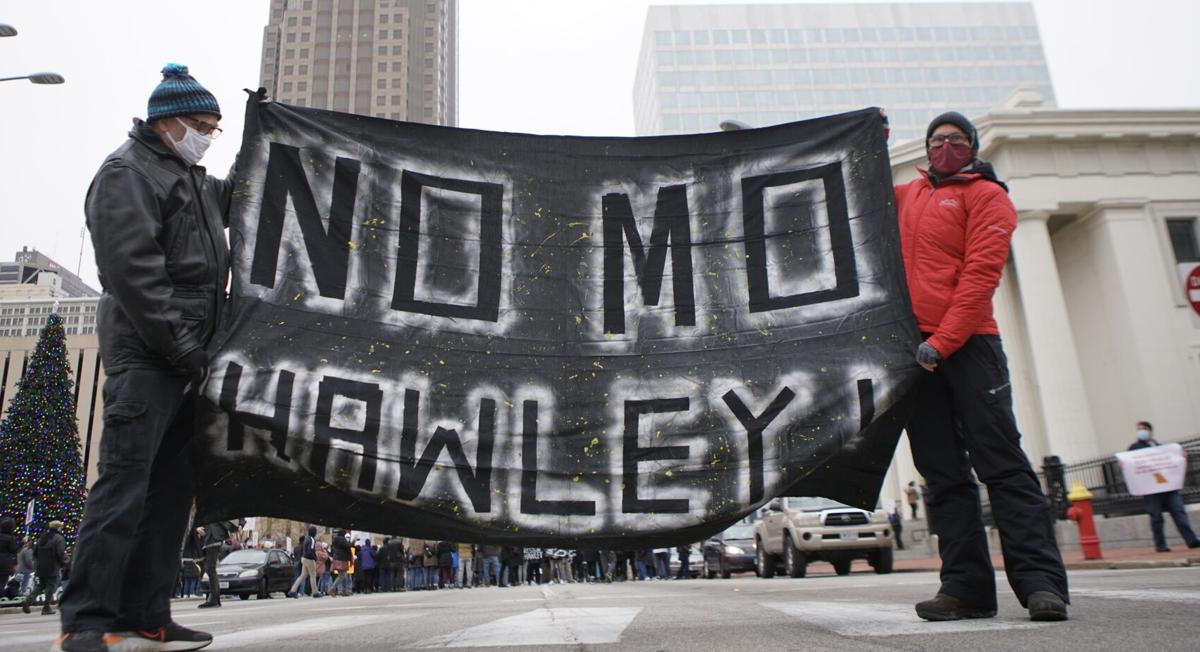 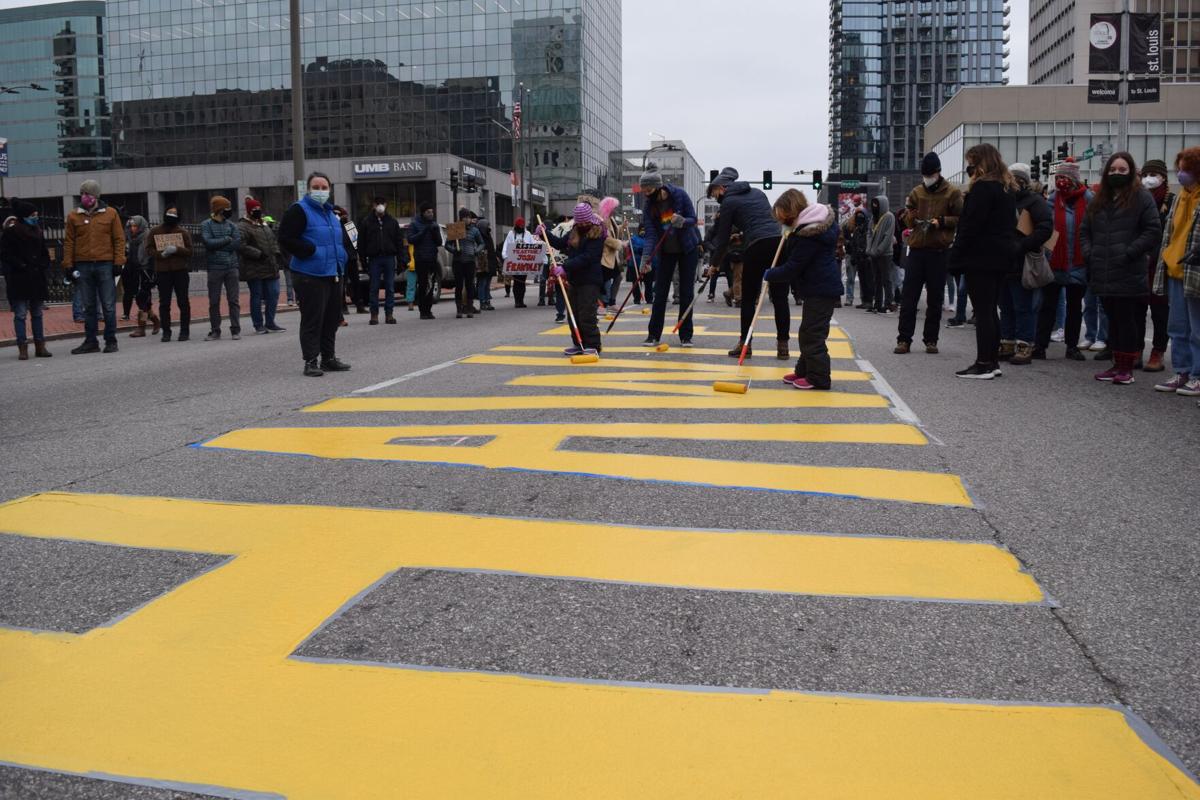 Protesters work together Saturday afternoon to paint "RESIGN HAWLEY" in the street in front of the Old Courthouse in downtown St. Louis. 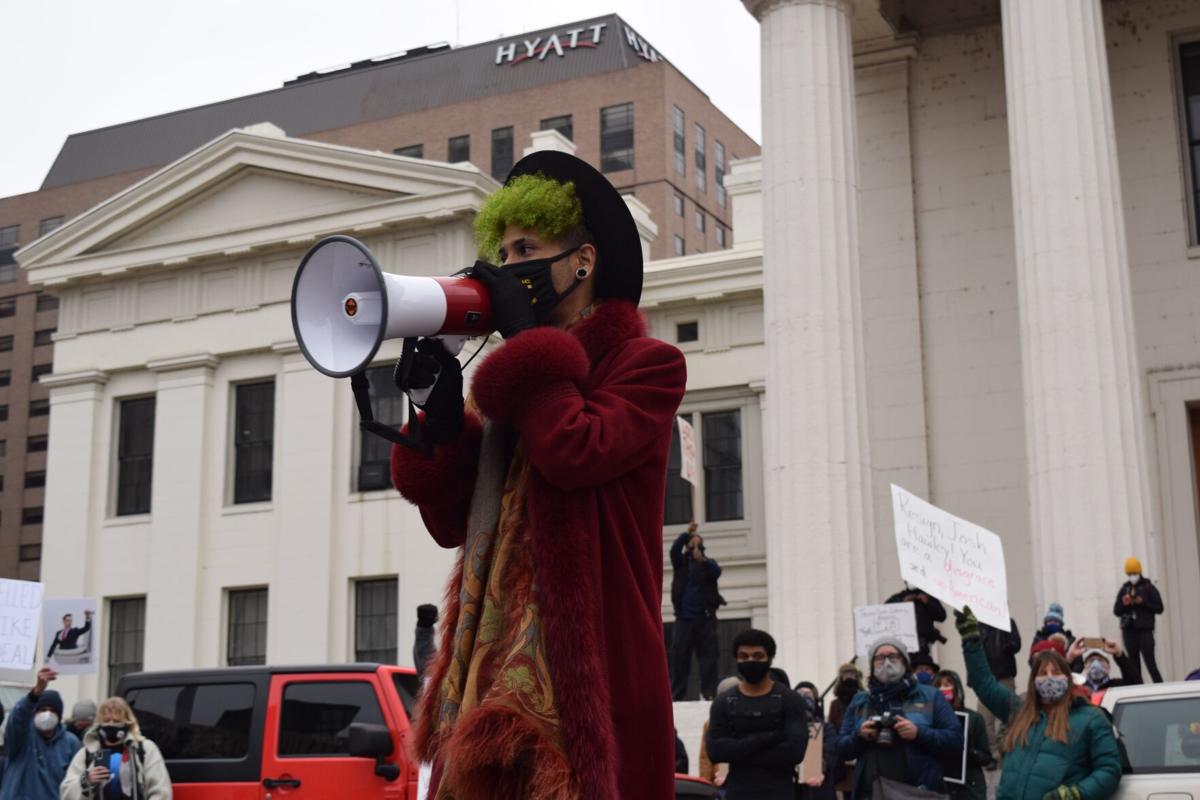 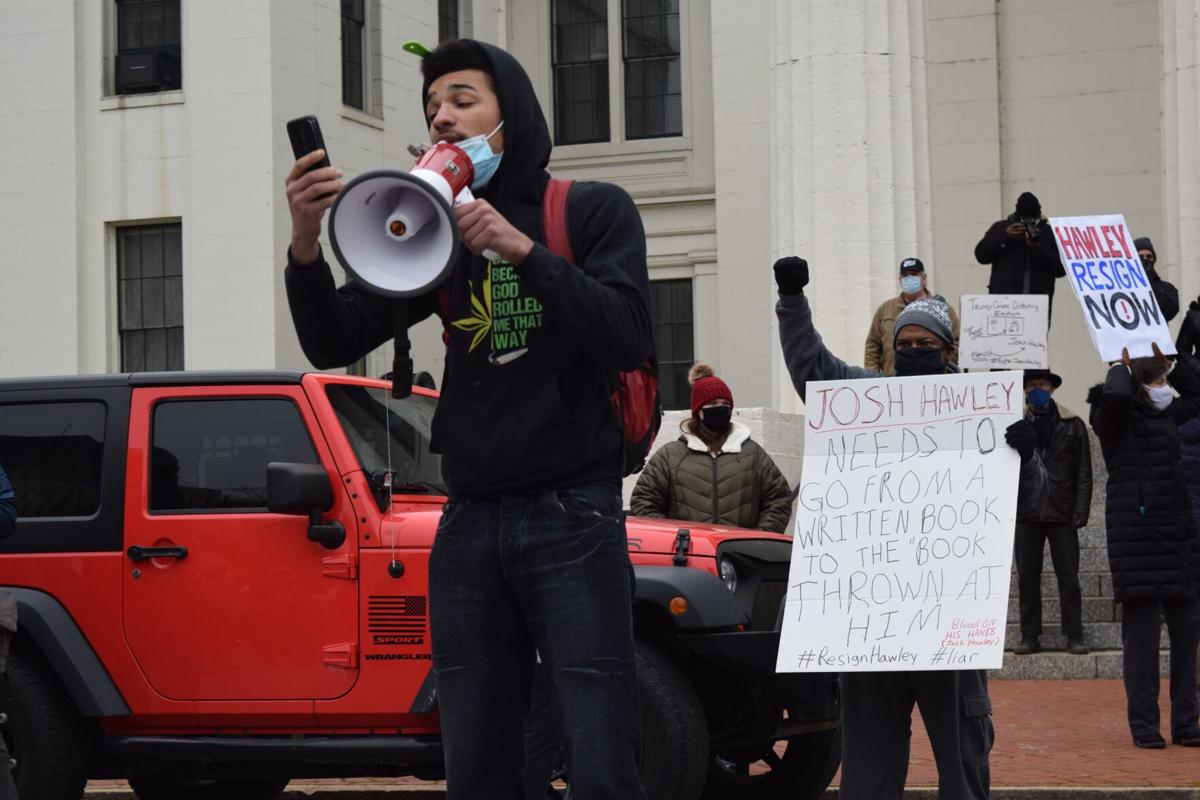 Elijah Foggy addresses the crowd with the megaphone, reading something he wrote during the Capitol riots on Wednesday, noting the stark difference in police interaction with the Capitol rioters compared to other movements put on by Black Lives Matter protesters. 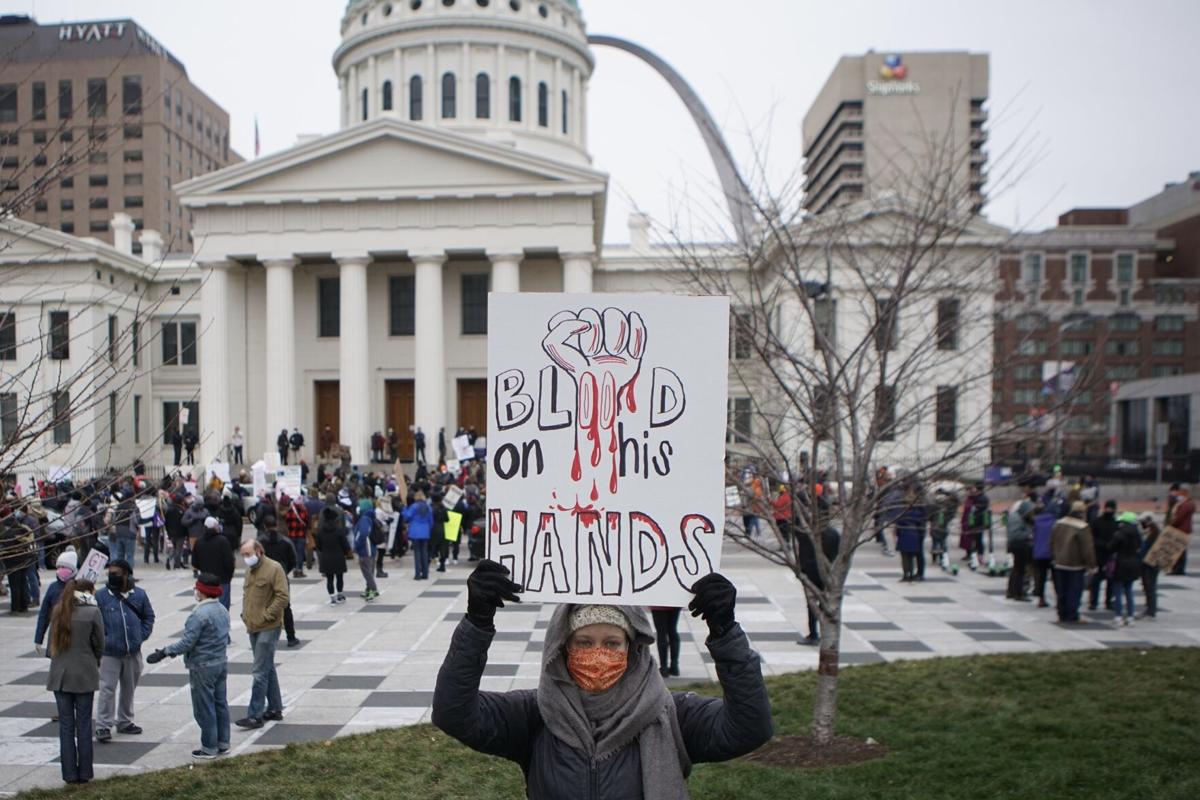 Sarah Oberle at Resign Hawley protest at the Old Courthouse. (A published photo shows Sen. Josh Hawley giving a raised fist salute to Trump supporters before the attack on the Capitol.)

Hawley has faced considerable backlash since he backed the rioters and objected to certifying Electoral College results in favor of President-Elect Joe Biden.

On Saturday, peaceful protesters painted “Resign Hawley” in yellow paint, while people took a megaphone to air their grievances against Hawley and the government. Chants filled the air intermittently, including “Resign Hawley, you don’t even live here,” and “Who’s flag? Our flag.”

Political activist and local drag star Maxi Glamour opened up the protest with a speech.

“Here in Missouri we are stuck with a senator who wishes to defy democracy, being one of the biggest enablers of Trump’s coup,” Glamour said. “Sen. Josh Hawley is a wart on the body of America and needs to be removed.”

Theon Jones, who also addressed the crowd, told The St. Louis American this was her first protest — but definitely not her last.

“I’m here to support getting Sen. Josh Hawley fired for what he brought about on the Capitol on Jan. 6,” she said at the beginning of the protest. “… I actually expected more people but I’m glad we all came out to show our support in getting him out of the Senate.”

“Whatever comes up, I plan on being a part of it,” Jones said of future activism.

Victoria Neno, said she’s been attending events like this one since last summer. Neno is also part of the group Speak Truth to Power, who organizes events mainly in St. Louis County.

Elijah Foggy addressed the crowd with the megaphone, reading something he wrote during the Capitol riots on Wednesday, noting the stark difference in police interaction with the Capitol rioters compared to previous activities by Black Lives Matter protesters.

“If that were any of us, BLM protesters, risking our lives to protest for a cause that matters, we would most likely be arrested violently or worse ...,” he said. “Hmm, I see where the government’s priorities are. The fight is not over.”

The protest was scheduled to last from 2 to 4 p.m. Saturday, and by 4 p.m. the crowd had thinned considerably.

Hawley posted on Twitter Jan.7 that he lost a book deal with publishers Simon and Schuster due to his vote, calling the publisher’s move “Orwellian.” In that same tweet, he blamed the left for censoring his right to free speech.

In addition to the book deal, one of Hawley’s major financial backers, Joplin businessman David Humphreys, denounced him on Thursday, according to a Missouri Independent report.

Humphreys called Hawley a “political opportunist” who used “irresponsible, inflammatory, and dangerous tactics” to incite the rioting and called for the U.S. Senate to censure him.

“Let me be clear, this is not just a contract dispute,” Hawley wrote in the tweet about his book deal cancellation. “It’s a direct assault on the First Amendment. Only approved speech can now be published. This is the Left looking to cancel everyone they don’t approve of. I will fight this cancel culture with everything I have. We’ll see you in court.”

Former Sen. John C. Danforth, R-Mo., told Tony Messenger of the St. Louis Post-Dispatch that he regrets supporting Hawley and working hard to get him elected. Danforth went on to say it was “the worst mistake he ever made” in his life.

“At a time of extreme polarization the populist strategy is to drive America even farther apart by promoting conspiracy theories and stoking grievances. We must reject this strategy and reclaim America's historic purpose of holding our diverse nation together as one people.”

Danforth represented Missouri in the Senate from 1976 to 1995.

“The elections in November of 2020 saw record turnout amongst African Americans, and the unprecedented spread of disinformation and undermining of public confidence in the election, culminating in a baseless vote against its certification, is nothing short of an attempt at undermining the will of voters of color. It is disgraceful,” Jones’ statement wrote in part.

Sen. Roy Blunt, R-Mo., also released a statement on Twitter regarding the riot at the Capitol, although he did not mention Hawley.

“My view is that there is not sufficient evidence to sustain objections,” he wrote. “The states and the voters of each state elect the president. As such, Congress has a constitutional obligation to accept the election results.”

Blunt was first elected to the Senate in 2010.