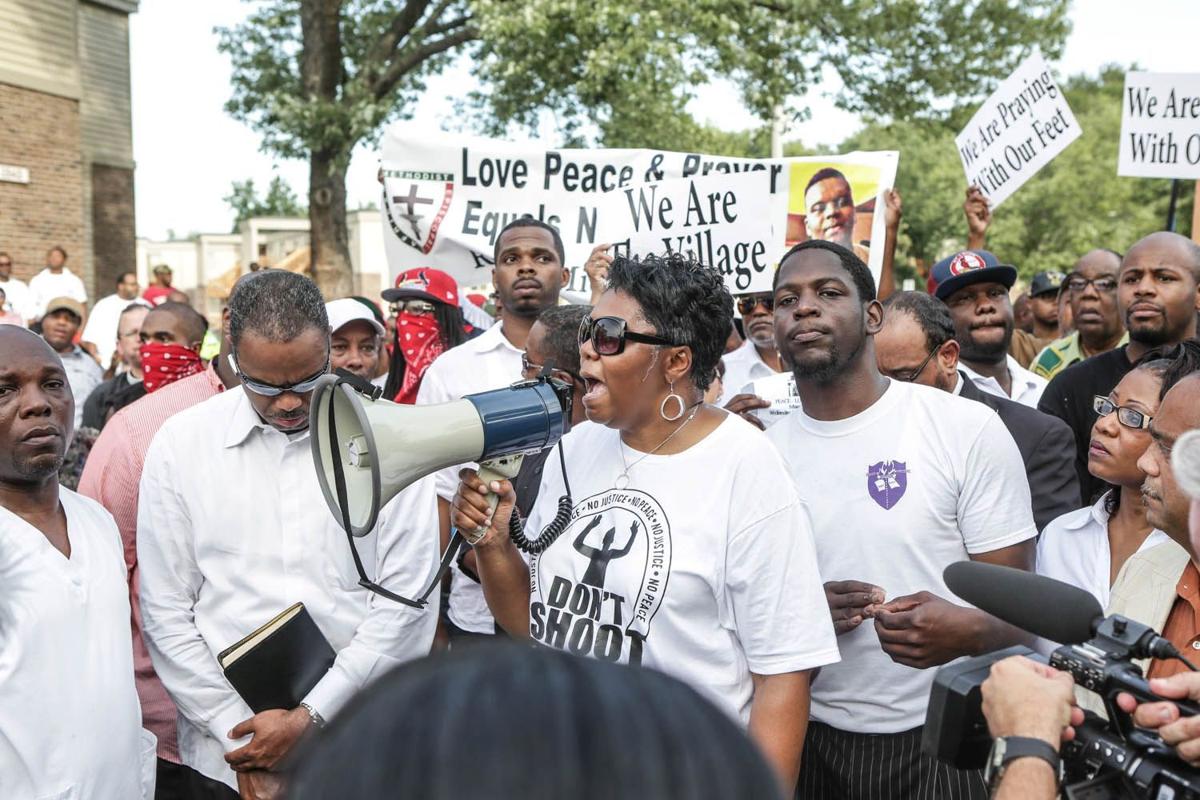 Rev. Traci Blackmon, pastor at Christ the King United Church of Christ in Florissant, has been a front line leader in the Ferguson protest movement. 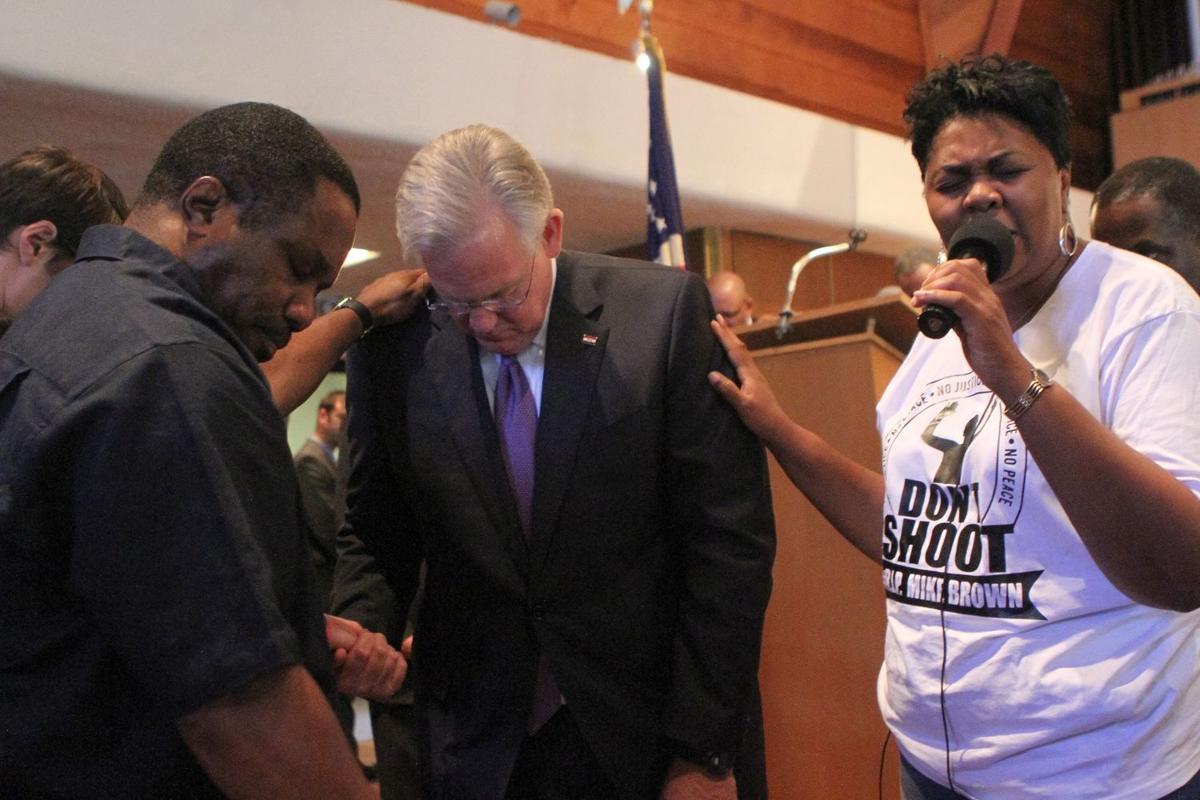 Rev. Traci Blackmon, pastor at Christ the King United Church of Christ in Florissant, prayed with Gov. Jay Nixon when he met with clergy and community leaders on the day he declared a State of Emergency in Ferguson. He lifted the State of Emergency on Wednesday.

Rev. Traci Blackmon, pastor at Christ the King United Church of Christ in Florissant, has been a front line leader in the Ferguson protest movement.

Rev. Traci Blackmon, pastor at Christ the King United Church of Christ in Florissant, prayed with Gov. Jay Nixon when he met with clergy and community leaders on the day he declared a State of Emergency in Ferguson. He lifted the State of Emergency on Wednesday.

Before the praise and worship service began Sunday, August 24 at Christ the King United Church of Christ in Florissant, a young woman decorated its sacred spaces with colorful origami cranes connected by strings. She had a plastic container full of them.

Now, a different type of ground zero is here in Ferguson.

Rogers said the cranes are a visual token of prayers. “Your tears are our tears,” she said.

The Rev. Traci Blackmon, pastor at Christ the King, is a nurturer, organizer, purposeful collaborator and mother of three, including two young African-American men. She is a minister of the Gospel who gets her marching orders from on high through constant prayer, reflection and consideration. She took vacation time from her job as a nurse to devote her attention to demonstrations and activities sparked from the fatal police shooting of Michael Brown.

One day before the teenager’s family said their final goodbyes at his funeral, Blackmon had a message for her church family derived from 1 Kings 19:1-10. It talks about when Jezebel threatened Elijah’s life and he ran and hid in a cave.

The analogy, she said, is with people of color, who have been in a cave far too long, working on jobs where they are evaluated by a different set of rules and living in neighborhoods structured for containment, rather than community.

“Cave-dwelling victims and cave-dwelling Christians – I’m talking about those of us who live quiet lives with low expectations – we lose our collective potential because we have been hurt so long and so much that we are scared to try anything else,” Blackmon said.

She reminded those in attendance that it won’t be easy. However, it is only in the struggle that we learn who we really are, she said.

“The Lord found Elijah in the cave,” she said. “Aren’t you glad that every now and then, the Lord will come and find you?”

Blackmon said the community needs to reach the voice of its youth lost on the caves of the streets.

Blackmon has made some remarkable connections in her organizing work. She went to the source of the movement, the Canfield Green Apartments. That’s where Michael Brown was shot and killed and where he was mourned first, when Ferguson police left his lifeless body lying in the street for more than four hours.

In her visits to Canfield, Blackmon found working professionals; two-parent families who want the same thing for their children as people in Ladue; veterans who can’t get the services they need after serving our country; and elderly people whose neighbors were looking after them because police had barricaded Canfield in.

One late-night call-out to area clergy to strategize a coordinated response to the crisis drew Gov. Jay Nixon, U.S. Sen. Claire McCaskill, other elected officials and news media. Blackmon sat Nixon down in a pew and made him listen to a Canfield resident, Sierra Smith, who made a direct appeal about dire conditions in Canfield that Nixon seemed to ignore.

Blackmon has attracted leaders from many faiths wanting to work with her, but she grieves that different groups working on this movement are not working together

“A mass of angry people without an organized collective strategy, even if there is a shared goal, is a mob, not a movement,” she posted on Facebook.

Blackmon is organizing her efforts via the web site PrayingWithOurFeet.org and the social media hashtag #PrayingWithOurFeet. The title came from a quote by abolitionist and former slave Frederick Douglass: “Praying for freedom never did me any good till I started praying with my feet.”

“It’s time for us to stop waiting on the Lord to do everything and understand that we are the embodiment of Christ on this earth, and we have to, not just pray with our mouths, but pray with our actions,” Blackmon said.

And we need to do these things together, she said, if the Ferguson movement is to have any impact.

“Everybody that is trying to move this, we need to all be working together,” Blackmon said. “I think we are all working in the same direction, but we are not working together in terms of being wise about our utilization of resources, both human and physical resources, so that we can endure for the long-term.”

To post events or for more information, visit www.prayingwithourfeet.org.

rev. traci, you're right. this one is for the young people. i hope you and the st. louis american will keep us posted on your endeavors. we're praying for you and for peace everywhere.

Returning to church during the pandemic

The virus is still out there waiting to attack us

Our black bodies are not for consumption