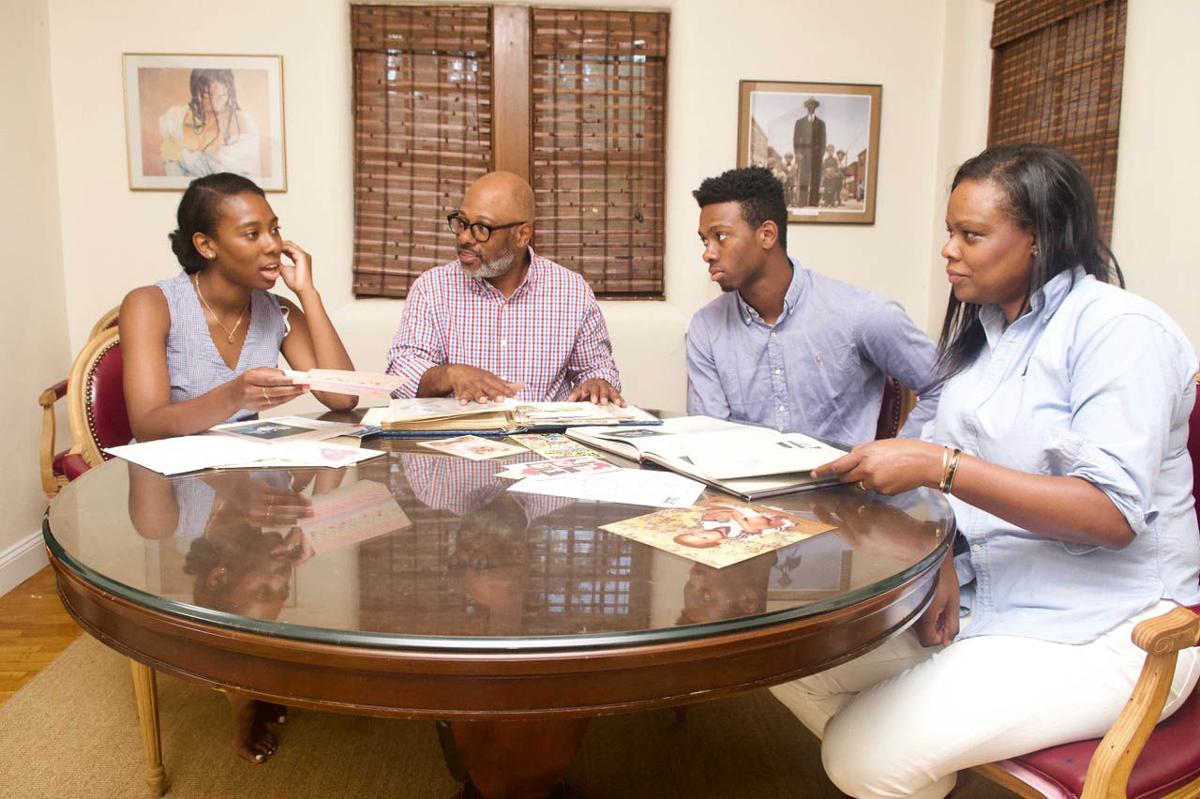 Caroline Washington with her father, Theo, brother Teddy, and mother, Denise as they go through family albums. The family members have been outspoken advocates for education and social justice over many generations. 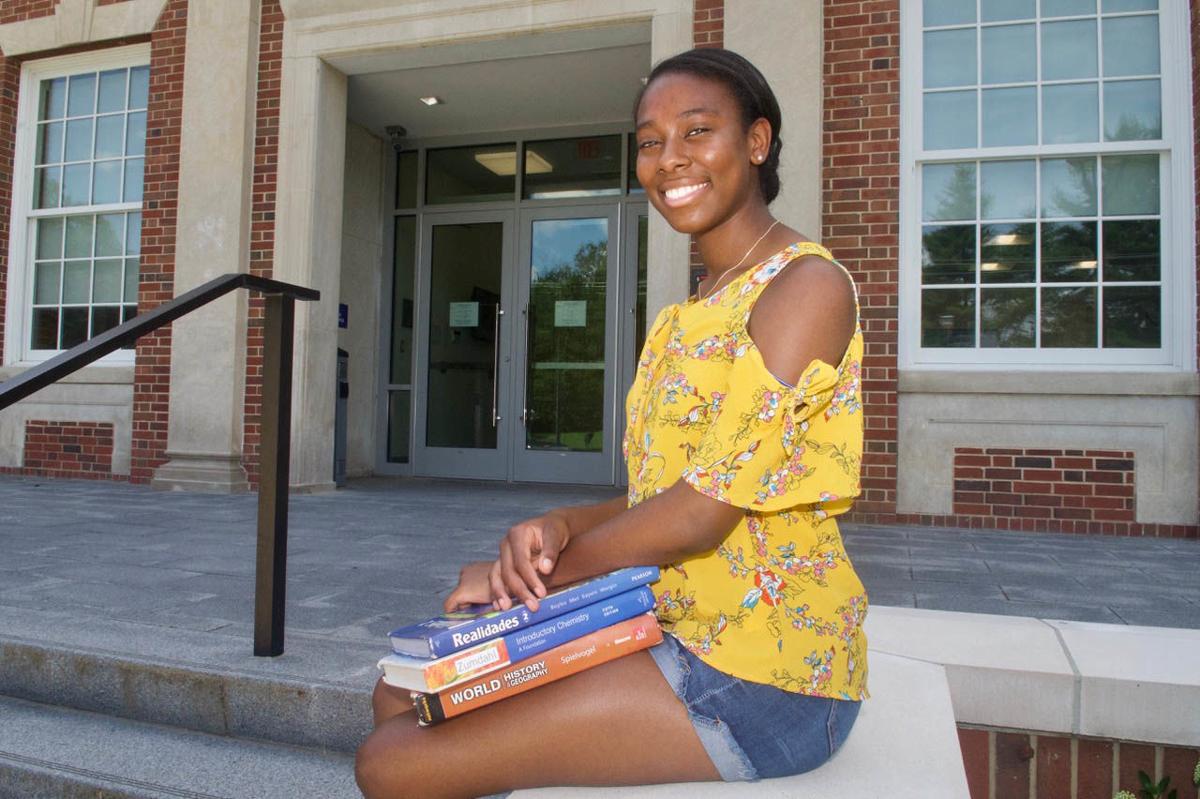 Though she attended parochial schools for most of her life, Caroline Washington transferred to Ladue's Horton Watkins High School for her junior and senior years. Throughout, she has thrived in diverse classrooms.

This story was produced in partnership with the Pulitzer Center.

Education is an obsession for the Washington family of Pasadena Hills. Parents Theo and Denise will tell you that their studies were the means by which they got their purchase on the American Dream. Though both sides of their family come from humble origins, Denise and Theo’s son, Teddy, is a third-generation college student. And as a rising senior at Ladue’s Horton Watkins High School, Caroline soon will join him.

So no one who knows the family would be surprised that Caroline, 17, has visited scores of campuses as the family considers her college choice. Or that Teddy, 18, has finished a successful freshman year at Washington University.

Or that the Washington family focuses on lessons learned from a painful incident a year ago this month – when, on July 7, 2018, Teddy and nine other rising black Wash U freshman were stopped late at night by Clayton police in an act the students considered racial profiling.

Education is a big part of why the Washingtons felt it important to step up and protest the incident, which started at an IHOP restaurant at Clayton’s edge. In the days following, Teddy Washington made his mark, fielding interviews by The St. Louis American and other local media, as well as TV stations and national networks as he explained the pain and anger he felt from the incident.

That’s the first of two threads that run through generations on both sides of this family: to speak up in the face of discrimination, bigotry and ignorance, whatever might get in the way of equal opportunity. Not just for themselves, but for others in their community.

The second thread is hard work and a commitment to fully participate in whatever educational opportunities would be made available to them. Advanced placement courses, but extracurriculars too.

What is the payoff of such an education? Good jobs that allowed Theo and Denise to build a nest egg, invest in a home in a beautiful and diverse neighborhood in Pasadena Hills, and afford tuition at excellent schools. That set their kids up to win scholarships and to someday get internships, which will then qualify them for high-paying jobs. Teddy is looking toward Wall Street. Caroline is looking toward joining a law firm or maybe going to Hollywood, as either an actor or an agent. Neither Caroline nor Teddy see obstacles in their paths.

Caroline understands that this is rather remarkable, given the nation’s history, the region’s history, and her family’s history. “I think we have led a privileged life,” she said. “When kids talk about what they have been through, I don’t relate to that. Sometimes it feels like survivor’s guilt.”

Of course that sense of privilege goes only so far. It’s safe to say most well-off white youths aren’t burdened with survivor’s guilt.

And it’s safe to say that Caroline knows of racial inequities and the extra hurdles her family has faced across generations. As is the case with so many African-American families in our region, the Washingtons on both sides of the family started with few resources and with odds stacked against them in pursuing a quality education.

But in recent years, Caroline and Teddy’s path to success has been so much smoother and the problems only something they read about in newspapers, saw on television and studied in school.

Then Caroline suddenly saw it up close as her brother dealt with the fallout from that IHOP incident.

Teddy was just getting started at Washington University when the encounter with Clayton police unfolded. The controversy and the protest it sparked arguably resulted in progress and reform. The City of Clayton, while asserting that its gendarmes followed policy to the letter in the IHOP incident, hired an outside firm to re-examine those policies and the police department’s approach to community policing. The city is due soon to issue a report based on months of study and discussions with residents and others who visit Clayton to shop or do business.

Now it is Caroline’s turn to soon embark on her own college experience. Though she just finished her high school junior year, Caroline’s search for just the right university has been going on for years. Theo and Denise have made it part of nearly every road trip they have taken with Caroline. Since she was 8, Caroline has been to 78 college campuses. Over spring break this year, they visited – not a typo – 19 universities.

Even before her brother’s encounter with the Clayton police, Caroline had been well versed in the arts of advocacy and protest.

She helped try to form an LGBTQ support group at Nerinx Hall, where she spent her freshman and sophomore years. She also played a role in the school’s Diversity Club; she protested when school officials would not allow members to sell a jersey with a closed fist in rainbow colors that suggested empowerment for marginalized groups. That is one of the reasons she transferred to Ladue.

With that said, the Washingtons have a profound respect for a Catholic education. Caroline’s great-grandmother, Eloise, sent her seven children to archdiocesan schools beginning in the 1950s.

Not long ago, Caroline’s grandmother, Carol Henderson-Powell, shared that history with Caroline. The occasion came up when Caroline and her classmates in an African-American studies class were assigned to delve into their families’ backgrounds and tell a story. It explains to a great degree why Caroline feels privileged.

Carol, now 67, remembers getting a quality education, but an integrated one as well in archdiocesan schools, which she deemed just as important. It gave her the means and understanding as a teacher and a principal to navigate in St. Louis’ rocky racial terrain. It also helped her to raise Caroline’s mother, Denise, to help her feel comfortable where whites predominate and to self-advocate in whatever way is most effective. This has come to be called code switching, speaking differently to people based on their race and your sense of how they grew up.

Carol went on to become an educator in both Catholic and city schools and to become quite comfortable in any classroom environment. “I always felt like I could fit with anybody,” she said.

Her supervisors picked up on this, and when St. Louis Public Schools finally got around to living up to the U.S. Supreme Court’s desegregation mandate, Carol was the first black teacher sent to the all-white Windsor Elementary School in South City. She remembers being interviewed several times for the assignment, as if she was some kind of Jackie Robinson. Would she be able to handle the stress that would come with breaking the color barrier?

Caroline and her fellow students were conducting their interview of Carol using FaceTime from a classroom at Horton Watkins High School. A few years ago the school underwent an $82 million renovation, supported not only with tax dollars, but with an additional $2 million from a foundation funded by businesses and well-to-do donors. Carol was sitting at her dining room table in the city’s O’Fallon neighborhood. Her home is in the Vashon High School attendance area, which has one of the lowest high school graduation rates in the region.

Caroline has always loved visiting her grandma’s home. Growing up, she remembers the walls filled with art, the shelves lined with books, and her grandma’s tolerance for letting her ride her trike up and down the hallways. But she also remembers hearing gunfire in the neighborhood, and knowing it was not always so safe to play outside.

‘Our parents always pushed us’

Like her grandma, Caroline started at a Catholic school, St. Roch, in the Skinker-DeBaliviere neighborhood.

Monsignor Salvatore E. Polizzi, longtime St. Roch's pastor, has worked with developers and city officials since 1981 to keep the neighborhood both stable and diverse. The school is also diverse with a 60-percent white, 40-percent non-white split among its 200 students.

Students post outstanding scores on standardized tests and when moving on to high school, typically win admission to the most competitive schools in the region – schools like St. Louis University High, where Teddy would go, and Nerinx Hall.

At St. Roch, Caroline said she never felt defined by her race, more by her talent and her passion for sports and drama. “It was like utopia,” she recalled, “but I remember my mom telling me it’s not always going to be like that.”

Caroline moved from St. Roch to Nerinx Hall, which works hard on diversity recruitment. It addresses such issues as white privilege and Black Lives Matter in class and at assemblies. But Caroline discerned that the administration was progressive only to a point.

She remembers an administrator putting the kibosh on the Diversity Club’s effort to create the jersey with the rainbow colored fist.

“We were told it was a loaded symbol,” Caroline said. And when a fellow student raised the issue with an assistant principal, Caroline heard him say: “If you don’t like it, you can go somewhere else.” (Caroline said the administrator later apologized.)

So it was on to Ladue, which would not be available to Caroline as a Pasadena Hills resident except that her dad teaches in the district.

Caroline plunged into her studies but remained busy before and after school. She made many friends, both black and white, and has found it relatively easy to navigate among groups.

She took it in stride when, in a case of color-blind casting, she was given the role of Vi, the wife of the ultra-conservative white preacher in Footloose. (Dianne Wiest played her in the movie.)

As she looks this summer at even more colleges, Caroline will look for a campus where she can do theater, get prepared for law school, but most of all play herself in the unfolding Washington-family saga.

“Our parents have always pushed us to see how far we can go,” she said. “Let’s see what I can do. Let’s see how far I can go.”

This account is taken from a longer narrative. Readers are invited to learn more and join the project’s e-mail list at beforefergusonbeyondferguson.com.