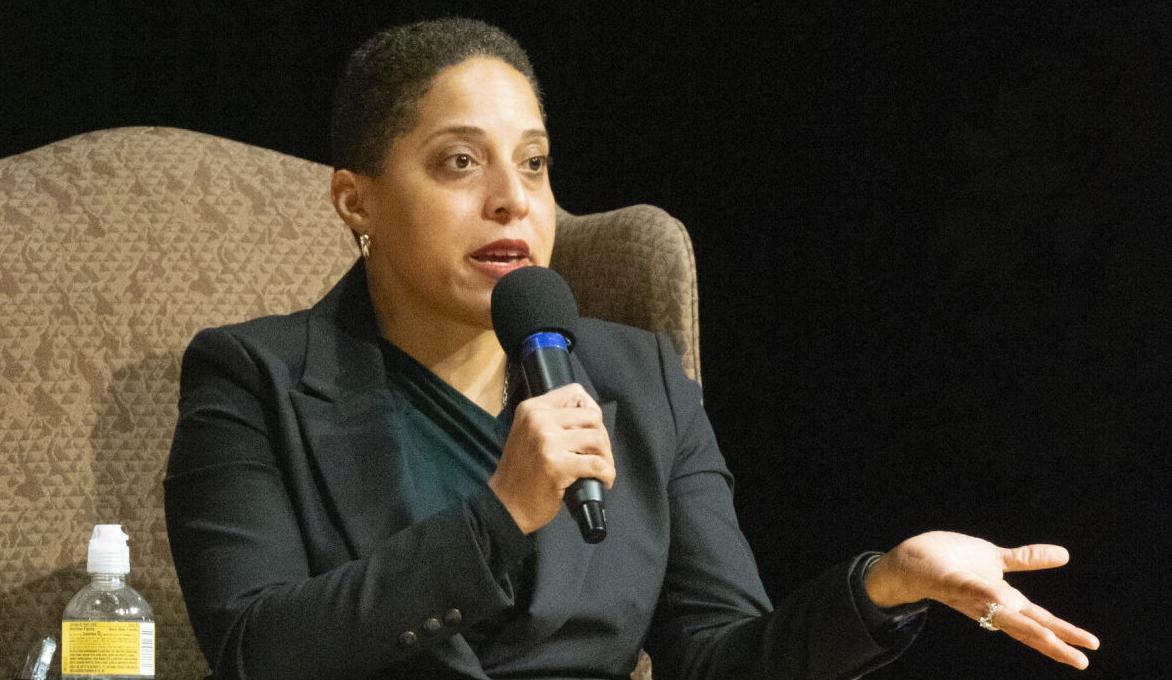 Circuit Attorney Kimberly M. Gardner speaks candidly with Bonita Cornute about her historic role as the city's first Black circuit attorney and the pushback she receives as a progressive prosecutor on Wednesday, Nov. 17, 2021 at Harris-Stowe State University. 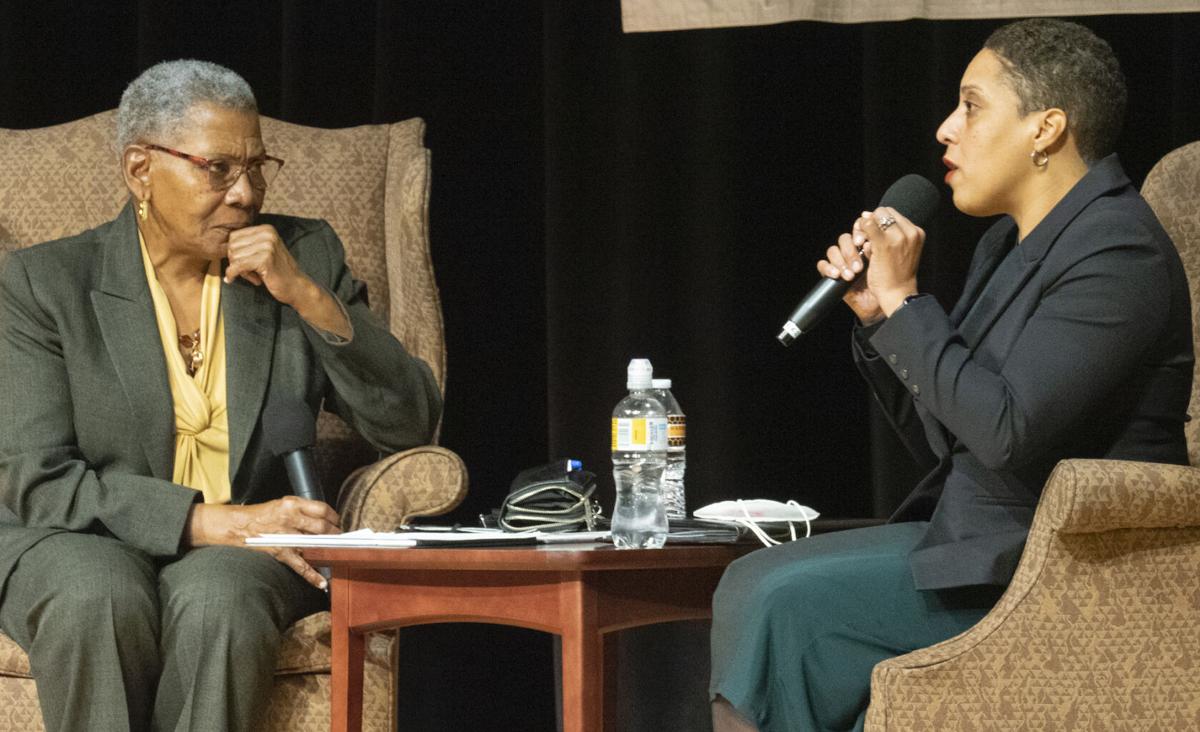 “My predecessors never had to deal with the most aggressive and vindictive police force in this country.” –- St. Louis Circuit Attorney Kimberly M. Gardner

In the first 20 minutes, the city prosecutor meticulously outlined the “action and reaction” parts of her vocation. This was in response to Cornute’s question about the possible misconceptions advocated by her adversaries in the media.

Gardner quickly noted how the local press, in particular the region’s daily newspaper, the St. Louis Post-Dispatch, constantly criticizes and judges her by the actions or inactions of her predecessors.

“First of all, none of my predecessors were the first African American prosecutor elected to office since 1821. Let that sit with you for a moment,” Gardner responded before adding: “It’s like comparing 1821 to 2021…there’s no comparison.”

Gardner then unleashed a litany of unique situations she’s dealt with that her forerunners never experienced.

“My predecessors never had to deal with the power of the prosecutor’s office post-Mike Brown. They didn’t operate under the public lens of intense accountability.”

Gardner ran as a “reform candidate” two years after a Ferguson police officer shot and killed the unarmed black teen. The shooting set off protests and reinvigorated calls for police reform across the nation.  As a “progressive prosecutor,” Gardner vowed to tackle racial injustice issues, investigate police shootings, and enact policies to address racial disparities within the criminal justice system. Expectedly perhaps, her agenda was met with hostile resistance from power brokers within the St. Louis Police Department.

“My predecessors never had to deal with the most aggressive and vindictive police force in this country,” Gardner continued. “Before I even stepped into office, Jeff Roorda (head of the St. Louis Police Officers Association) told me if I held any police officer accountable, they would make my job difficult.”

It seems the association has made good on the alleged threat. The union successfully blocked Gardner’s attempt to seek city funding for an independent team of investigators to investigate officer-involved shootings. Roorda, a former police officer with a tainted record has been the media’s go-to-critic of Gardner’s performance in office. Roorda is among police officials who have lambasted Gardner for adding more than 75 police officers to an exclusionary list for alleged lying, abuse, or corruption. Instead of exploring the actions that led to more than 5% of the city’s approximate 1,100 commissioned officers being on such a contentious list, local media outlets have allowed Roorda and other police protectionists to project Gardner as weak on crime.

“My predecessors never had to deal with a police department that put out antisemitic, homophobic, anti-Islamic and racial epithets on social media sites,” Gardner stated.

“No previous prosecutor has ever received the scrutiny of holding a powerful officeholder “accountable.” –- Gardner on her decision to file charges against former Missouri Gov. Eric Greitens.

The “never had to deal with…” theme continued as Gardner highlighted her fight against the powerful backers of ex-Governor Eric Greitens. After her decision to pursue a case against Greitens in 2018, Gardner, as Riverfront Times founder, Ray Hartman, noted, “became the target of a personal vendetta waged by power players held in the highest esteem by the very judicial system that holds her fate in its hands.”

Greitens was charged with felony invasion of privacy charges, following accusations that he sexually assaulted a hairdresser by taking a picture of her naked body, and allegedly threatening to release it publicly.

As part of the investigation against Gardner, police executed a search warrant of her office, seizing a server, Gardner said, containing all of her employees’ emails and files in 40 investigations into police misconduct.

“No previous prosecutor has ever received the scrutiny of holding a powerful officeholder “accountable”,” she stressed.

To further illustrate the unique challenges she faced, Gardner talked about pushback from two relatively recent cases. The first revolved around her decision to file felony weapons charges against the McCloskey’s, a Central West End couple who brandished guns toward protesters in their neighborhood last year. That decision, she said, not only fueled death threats from right-wing extremist groups, it garnered public denouncement from former President Donald Trump, former vice President Mike Pence, Missouri’s Governor, Mike Parson, and other powerful political figures.

A group of more than 60 current and former state and federal prosecutors signed a joint statement last year defending Gardner’s decision to prosecute the McCloskey’s who Gardner noted were “catapulted to fame” by St. Louis media.

Gardner’s attempt to get a retrial for convicted murderer Lamar Johnson in a case that has attracted attention from elected prosecutors nationwide was the second example she cited. As the Washington Post noted in 2019, there was a “staggering amount of misconduct on the part of homicide detectives and prosecutors that convicted Johnson and sent him to prison for life with no possibility of parole.”

“My predecessors didn’t have to deal with the scrutiny of my prosecutorial discretion to free a man when there’s overwhelming evidence of his innocence,” Gardner said. “They never faced the stark reality that a prosecutor doesn’t have the ability to correct wrongful convictions or set up some semblance of justice in such cases.”

Gardner did however win some acknowledgement for her work on the case. In 2019 the Midwest Innocence Project publicly praised her for her attempt “to correct an injustice.”

Cornute, who was visually stunned by Gardner’s outline of obstacles she faces, asked how she manages to show up for work and do her job?

“It’s not about Kim Gardner,” the city prosecutor answered promptly.

“It’s about the people who elected me to stand up against the status quo and change a system that we all know is doing what it’s meant to do.”

To win a murder conviction, police and prosecutors made up evidence and secretly paid a witness, St. Louis DA finds / Washington Post / July 26, 2019