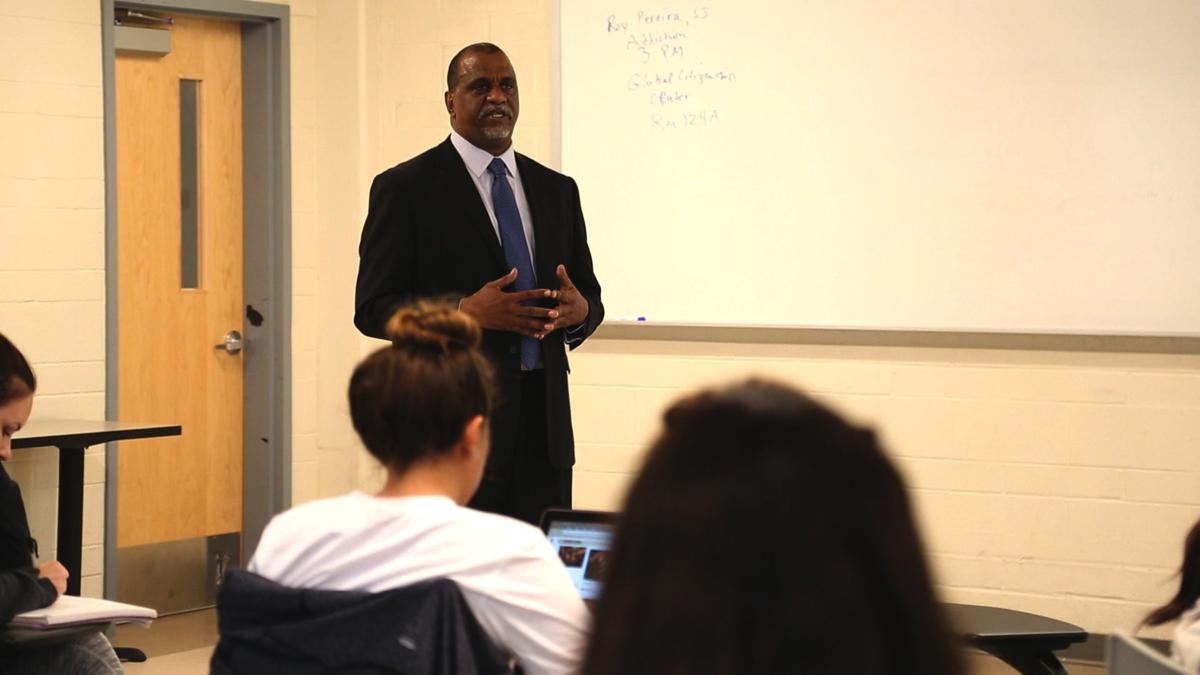 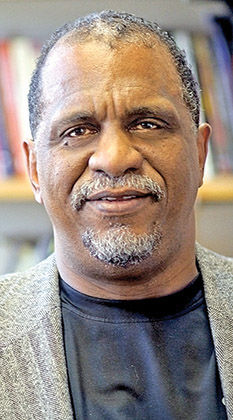 He and his wife Elizabeth “Liz” were getting ready to leave their Belleville home for an evening rehearsal of a Christmas play they were performing in when he had the attack and died soon afterwards.

Norm, a New York native, called himself a “developmental criminologist,” and he spent his life working to change the way people viewed and treated children who are “immersed in risk,” as he phrased it.

Norm had been doing extensive work within the St. Louis Public School District to decrease school suspensions and implement trauma-informed teaching initiatives within classrooms. He was honored for this important work at the St. Louis American Foundation’s 2017 Salute to Excellence in Health Care this past spring. Norm was also supposed to attend a ceremony the morning after he died, where he would have received a leadership award from the Incarnate Word Foundation.

“He was a quiet giant in our community for change,” said Jimmie Edwards, formerly a juvenile court judge and now the director of public safety for the City of St. Louis.

“He especially wanted to change the juvenile justice system. He was concerned about acknowledging implicit bias and fixing it. He was an effective advocate for equality and effective critic of the school-to-prison pipeline. Professionally, we heard him, and because of his advocacy, changes were made within the St. Louis Public Schools and within the juvenile court system.”

Norm started at SLU in July 2004 and was an associate professor in the Department of Criminology and Criminal Justice. He also had served as associate dean for community engagement and partnership for the College of Public Health and Social Justice.

“He was known for combining his scholarship and teaching with community engagement,” wrote Eddie M. Clark, SLU psychology professor, in an email to black faculty members announcing Norm’s death. “He was active in helping the Ferguson community recover. Norm was always the intense but calm voice for social justice in campus and community issues.”

Many SLU students and colleagues are mourning his loss. Jonathan Smith, vice president for diversity and community engagement, was a groomsman in Norm’s recent wedding.

“It's not often that you have friends who are also your heroes,” Smith said. “Norm was both of those to me. As a colleague, he always raised the bar and made everyone want to be better. You wanted to satisfy him because you knew he wasn't asking any less of himself. I can't begin to articulate the levels on which I already miss him.”

Norm earned his master’s degree and doctorate in criminal justice from the State University of New York at Albany in 1997 and 2001, respectively. He earned his bachelor’s in history from Marist College in 1981.

Born on Feb. 20, 1953, Norm grew up in the projects in upper Manhattan. Attorney Nina McDonnell, his mentee and close friend, said it was important to Norm that people knew that.

“He hated being called ‘Dr. White,’” McDonnell said. “He would start his speeches saying, ‘I’m Dr. White, but really, I’m Norm from the projects.’ He didn’t want people to view his title as a barrier to him. I think that captures the essence of Norm.”

Norm served as an expert witness in two juvenile criminal cases to prevent the youth from being tried as adults. One was a death penalty case. McDonnell served as his research partner in the cases, and they had planned to work on other cases.

In his sworn testimony, he spoke about his unique theory of risk immersion.

“When we talk about children, we talk about how they are at risk,” McDonnell said. “Norm argues that children who grow up in extreme poverty and neglect and violence – they are not at risk, they are immersed in risk. That’s the only world they know. They don’t know the world of not being at risk of violence and trauma.”

Norm’s goal as an expert witness was to help the individuals on trial and also set precedents that other courts could rely on, she said.

“There’s nobody like him,” McDonnell said. “It’s a huge loss.”

Norm and Liz just got married on July 8 at the Piper Palm House in Tower Grove Park. Liz said they met 10 years ago, singing in the Community Gospel Choir in Kirkwood. They were among the founding members of the group, whose mission is racial harmony.

“Music was truly an important part of his life,” Liz said. “When he would do his talks, he would begin with a song. He proposed to me by singing.”

Liz has been performing in the “Christmas Carol” with the Lookingglass Theatre Group for more than 20 years, and this was going to be Norm’s first year performing in the show as well. He was cast as one of the gentlemen and would also have been singing with Liz. They were preparing to leave for a rehearsal when Norm had his heart attack.

Liz said he was someone who loved nature, and that’s why he moved to Belleville.

“Nature centered him and brought him peace,” Liz said.

In his Belleville home, he liked to watch birds in his backyard and would post videos of hawks. His sister, Marvina White, said his little brother enjoyed nature from boyhood. They were raised in the projects, but – unusually for urban public housing – they were surrounded by parkland between the Hudson and Harlem rivers.

He was a "diehard" Yankees and Billikens fan. He had basketball season tickets and was at every game for both the men and women teams.

In the fall of 2014, White received a grant to help train teachers and principals at seven elementary St. Louis Public Schools on how race impacts the kind of trauma that their students experience. Through that work, the schools have been able to decrease the number of suspensions and implement more “restorative practices” in place of sending students home.

“It’s the light of Michael Brown,” Norm told The American in March, before his Salute award. “It’s something that his death exposed, and we have to pay attention to. In that light, really good things can come.”

In February 2015, the University of California, Los Angeles (UCLA) released a study that found Missouri leads the nation in suspensions of African-American elementary students. It also found that Missouri ranked first for having the largest gap in how its elementary schools suspend black students compared to white students – and it was fourth in the nation at the high-school level.

Following the UCLA report in 2015, more foundations made donations to further Norm’s work in the schools. And in 2016, the Missouri Foundation for Health gave his team funding to extend the work for three more years.

The work of Norm and his team touched about 2,500 students.

“There are children who don’t get the right to grow up,” Norm said. “Their lives are made difficult by decisions of adults who don’t even live in their communities, who make their communities so distressed and contribute to stress and trauma.”

These children live through challenges that “no adult should have to experience,” he said. If we understand this, then we are better equipped to meet the children where they are, “instead of assuming solutions that are not based in any reality,” he said.

Jason Purnell, one of Norm’s close friends and director of the For the Sake of All public health project, said Norm had a heart for this community, though he was not originally from here. He called Norm’s initiatives at SLPS “ground-breaking, before-its-time work.”

“Norm always put people first, and the research was a vehicle to doing that,” Purnell said. “He established deep relationships with the principals and teachers in those schools. He was great because he was good. It hurts a lot.”

Norm was also the principal investigator for the Shut it Down: Closing the School to Prison Pipeline project, funded by a consortium of St. Louis philanthropic foundations. Shut it Down represents a partnership with the family court, public schools and other stakeholders to assist school personnel in altering school culture to support improvements in overall student performance.

In his March interview, The American asked Norm what he would like people to understand about his work. During his response, he became so impassioned that he began to cry (and this American reporter cried with him). One of “his kids” had been killed that week, he said, and he had been mourning the child’s death for days. Norm said that people need to stop blaming schools for failure.

“We need to recognize that we have to take this on as a community, and that we all are failing the children in this community,” White said. “We have to make them the center of our work each and every day. For me, the thing I’m most proud of is that every day when I wake up, that’s what I do.”

Norm is survived by his mother Elizabeth “Betty” White; his wife Liz; his sons, Patrick and Michael; his sister, Marvina White, and brother-in-law Arnold Rampersad; and his brother, William Riley, and sister-in-law, Pauline Riley.

A memorial service will be held at 10 a.m. Tuesday, Dec. 12, 2017, at Valhalla Gaerdner Holten Funeral Home, 3412 Frank Scott Parkway West, Belleville, Ill. A reception will follow.
Donations in lieu of flowers may be sent to the Norman White "For the Children" Fund @ St. Louis University, 1 North Grand Blvd., Room 319, St. Louis, Mo., 63103
You must be logged in to react.
Click any reaction to login.
Salute to Excellence: Healthcare Luncheon

Norm was an amazing individual who went about his work with passion and strength. This is such a loss for our community. His legacy must be that we continue his work and work with our schools to address trauma and toxic stress for all of our students but especially our young folks of color. Norm will live on in the hearts of all who knew and loved him.