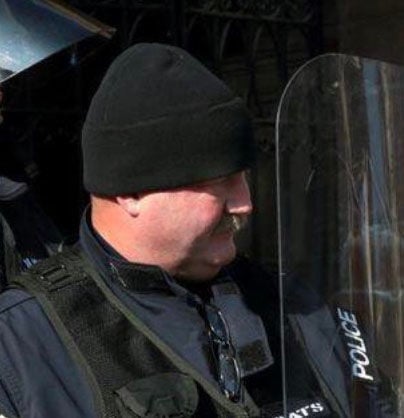 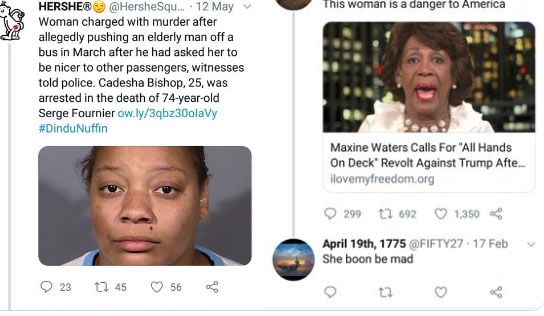 “Before he was trolling people with racist posts, he posted some of his personal pics,” according to Cop Watch STL’s thread. “That’s how we figured out he was Officer Bartney Coats. He uses his badge #5127 as his Twitter handle (@FIFTY27).”

When asked to comment on Coats' posts, a police spokeswoman told the American, "We are aware of the posts and an internal investigation is being conducted."

Thread: Bartney Coats, an officer with SLMPD has been posting racist stuff on Twitter for years. He recently reactivated his Twitter account. Here are two more recent posts where he refers to black women as "sheboons". @ESOP_STL 1/ pic.twitter.com/4hydql4X4r

Coats posted photos of himself wearing the name badge of Wilson — the then-Ferguson police officer who shot and killed Michael Brown in August 2014 — at a protest in front of St. Louis City Hall, stating, “Taking a stand is not easy.”

On October 8, 2014, Vonderrit Myers was shot and killed by then-officer Jason Flanery in South St. Louis. That night, Elon James White asked on Twitter, “How does a cop shoot someone 16 times when literally thousands of folks are coming to your city to protest cops shooting another kid? HOW?”

“But, the most disgusting posts from the officer are pics of black men shot and killed by police,” stated Cop Watch STL, attaching the graphic pictures. “The tweets he was replying to have been deleted, so I have no context for these tweets.”

By his posts, he appears to be a conservative Republican and a staunch supporter of President Trump.

Several of Coats’ Facebook posts were documented in the Plainview Project, a database released in June of biased social media posts from police throughout the country released. However, his tweets and replies were not included in the database.

In June, city aldermen held a hearing to discuss SLMPD officers’ posts documented in the Plainview database. There, Ferguson activist and citizen journalist Heather DeMian told the aldermen that Coats threatened to harm protestors and journalists in his tweets in 2015. She later provided the American with a screenshot of a Twitter exchange, where @AnonCopWatch wrote Coats, “You just sent me a link showing that you can legally shoot and kill anyone just by saying you fear for your life.”

Coats replied, “Be on your best behavior.”

Coats is documented in the Plain View Project as saying things like, “Ha!Ha! There’s a novel idea bring your own medical services to the riot!” in response to an article about police firing on protestors when they tried to bring a woman to them for medical aid. Coats just posted on Twitter on May 19, “Never turn your back on the feral,” referring to African Americans. DeMian told the aldermen that Coats was defying the police department’s social media policy established September 2018.