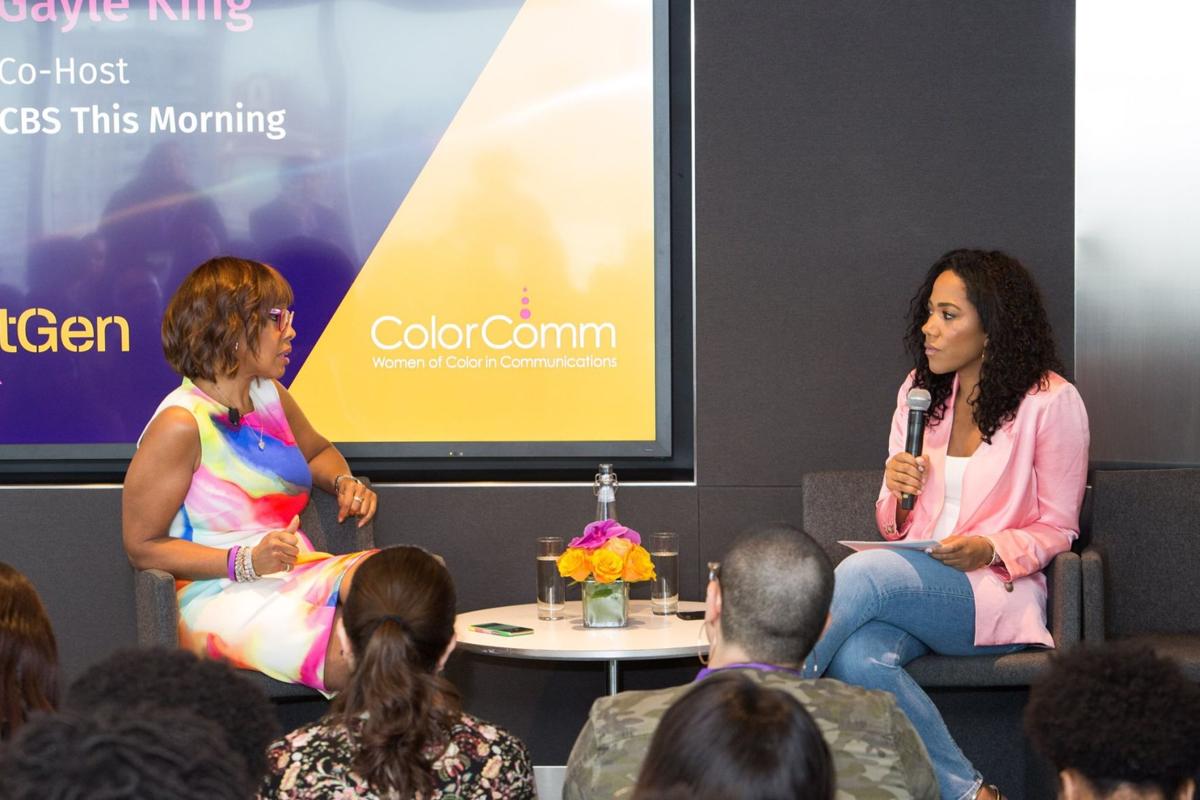 Lauren Wesley Wilson, founder of ColorComm, speaks with Gayle King. ColorComm focuses on advancing women to leadership positions, as well as on diversity and inclusion. 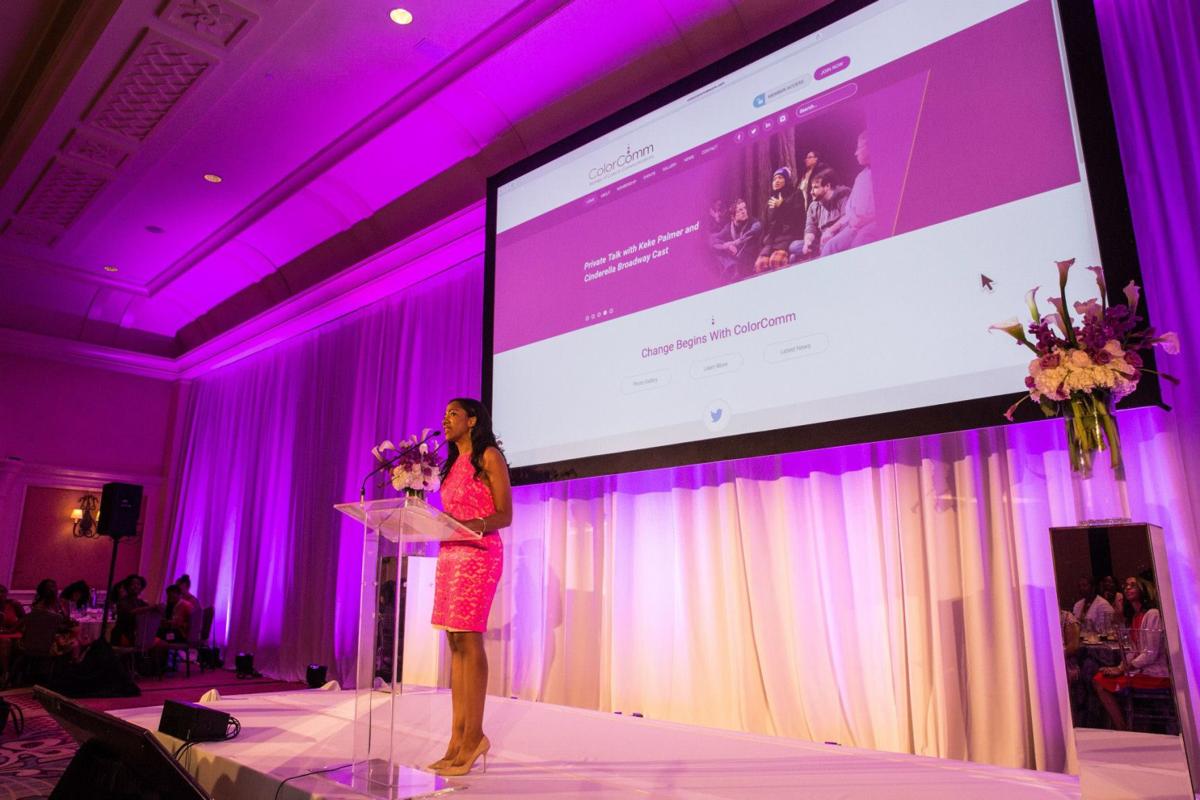 Lauren Wesley Wilson, founder of ColorComm, speaks with Gayle King. ColorComm focuses on advancing women to leadership positions, as well as on diversity and inclusion.

You work for a major corporate communications firm with global reach that has no top-level executives who look like you. Nor do many other organizations in marketing, communications, media and advertising industries. What do you do?

As a woman of color, St. Louisan Lauren Wesley Wilson asked herself that question as a 25-year-old. In response, Wilson created a unique, invitation-only luncheon series for women like her in communications that in eight years has become multimillion-dollar corporation.

ColorComm (www.colorcommnetwork.com) focuses on advancing women to leadership positions, as well as on diversity and inclusion, in the workplace through mentorship, programming, new business development and job opportunities.

“ColorComm has placed women in hundreds of jobs, created a community for inclusion, and has given women the resources to advance in work and in their personal lives,” Wilson said. “This is not only rewarding, but over time it has proven a necessary community for women of color working in communications.”

ColorComm has a community of more than 40,000 people, and includes 10 chapters in the United States and one in London, UK. ColorComm hosts three national conferences that attract Fortune 500 companies as financial partners. ColorComm events have attracted speakers such as Arianna Huffington, Gloria Steinem, Gayle King and Whoopi Goldberg.

“What has surprised me the most is how much we are fulfilling a need and how many women share that they are the ColorComm community,” Wilson said. “They are building and shaping their own community, which is inclusive of their culture, needs and resources.”

Wilson, who grew up in Chesterfield and attended Whitfield School, admits she had very friends of color growing up and even fewer African-American friends.

“My world was small, isolated, privileged and lacked diversity,” she recalled. “I got conditioned and used to being the only one and token black woman among a sea of white friends. I thought that this was the norm.”

After enrolling at Spelman College, Wilson experienced the diversity of her own race, and gained a better understanding of who she was. She earned a bachelor’s degree in political science, but had no plans for life after college.

“The summer after graduating from Spelman College, I was home researching communications/public relations internships and master’s degree programs. I saw that Georgetown was still fulfilling its first class for a master’s in communications and applications were ending soon,” Wilson said.

“I flew out of St. Louis to Washington, D.C., the day after I discovered the program, to meet the administration at Georgetown. I applied within the timeframe and got in. It was the best decision at the time, expanded my world and led me to my very first job in this business.”

Wilson remained in Washington, D.C., for a while before moving to New York more recently. She quickly learned some very important lessons that would serve her well when she ultimately decided to start her own business.

“Working for someone else at major companies and brands taught and shaped important lessons before heading to run my business full time,” she said. “I learned how to bring revenue into the business, how to create campaigns, develop strategies, build teams and build relationships – key skills that are necessary when thinking about leaving your full-time job and launching your career as your own boss and building your own company.”

When taking that leap of faith to go out on her own, Wilson did have role models to follow. Business owners dot her family lineage, including her mother, Valarie, who was founder and CEO of Wilson Sculley Associates, an advertising agency that had offices in Creve Coeur and Chicago.

“She truly understands what I go through day in and day out,” Wilson said. “She is a huge advocate, supporter, mentor and friend.”

“They sponsor ColorComm to reach industry talent, to invest in their rising star employees, to highlight their own diversity initiatives, and to learn,” she said.

And that’s why she recently expanded her business to include a male component. The first Men of Color in Communications Luncheon was a sellout in January 2018.

“I had many conversations with men in the industry who would approach me and say, ‘I wish we had something like what you’re creating for men,’” Wilson said. “We started out slowly to test this need. Our very first Men of Color in Communications Luncheon sold out and we knew we were onto something.”

“We brought together over 200 men of color to discuss business development, media training and branding, how to get into the C-Suite, build wealth and more,” Wilson said. “It was a huge success in its first year and shows there is a need for men to come together in a more formal away outside of fraternity organizations and sports outings.”

Wilson’s story has been featured in the Washington Post, Black Enterprise, Essence, Forbes and more. She has been recognized by PR Week as one of the 50 Most Powerful in PR. Her star continues to rise, as Wilson recently was named to Advertising Age’s Class of 2019 Women to Watch.

“I don’t just see this as an honor for me, but for the many teams who work to build ColorComm” she said. “This is truly an honor for our work and what we’ve built.”

“Entering the EMEA (Europe, Middle East and Africa) will be key growth areas to come, and we look forward to building communities in those markets,” she said.

What part of death don’t you understand?