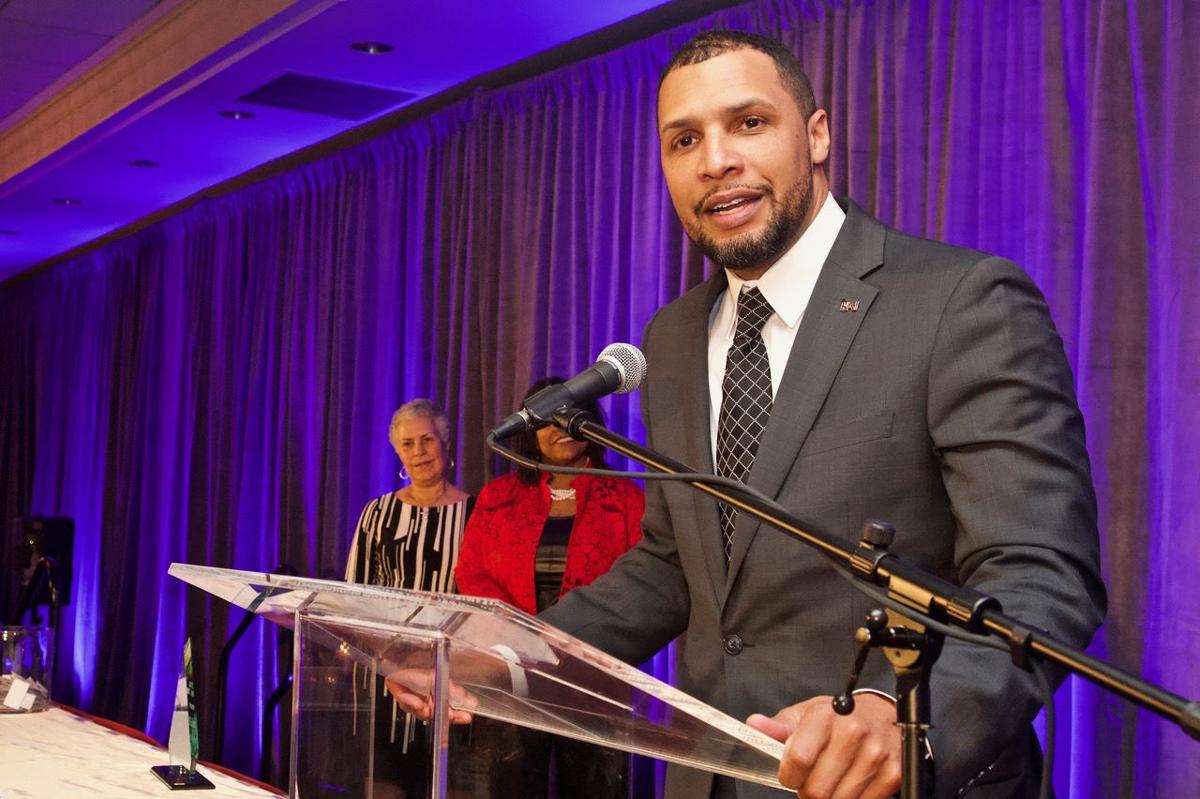 2019 Entrepreneur of the Year Michael B. Kennedy of KAI and Up Companies accepting his award Thursday at the St. Louis American Foundation's 20th Annual Salute to Excellence in Business Luncheon Thursday at The Frontenac Hilton. 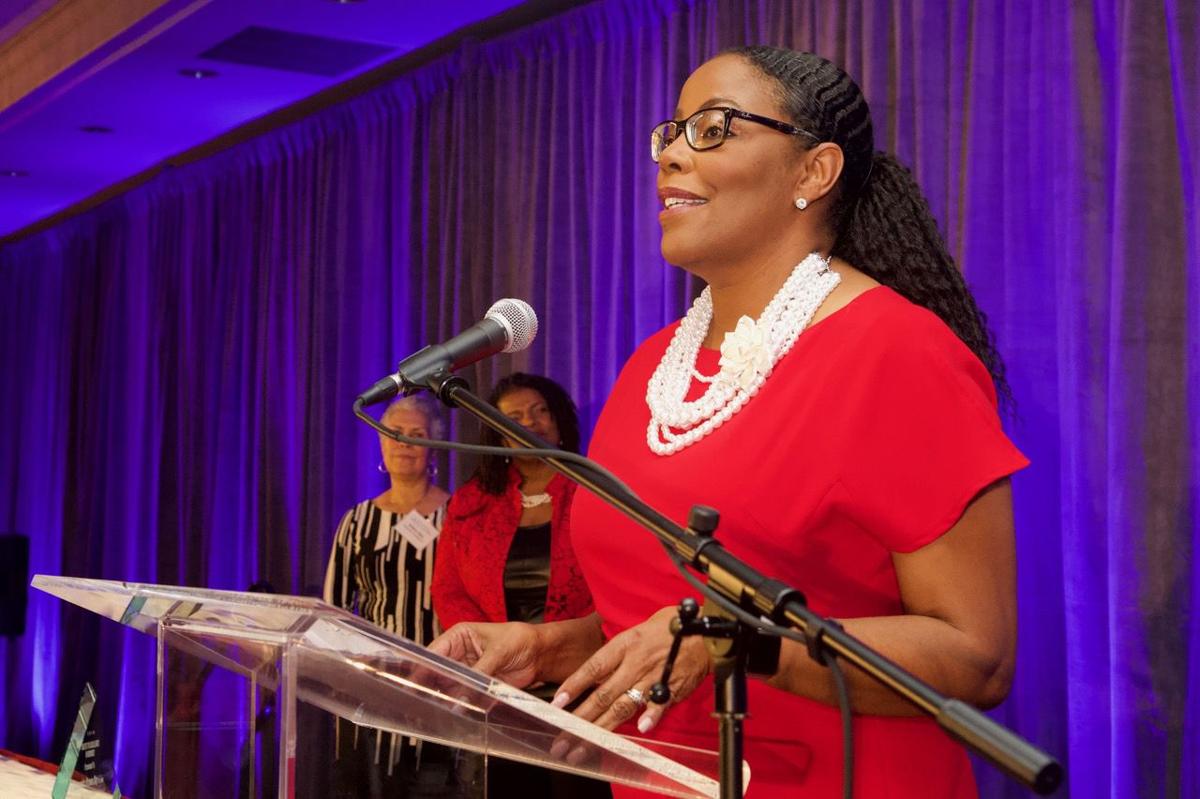 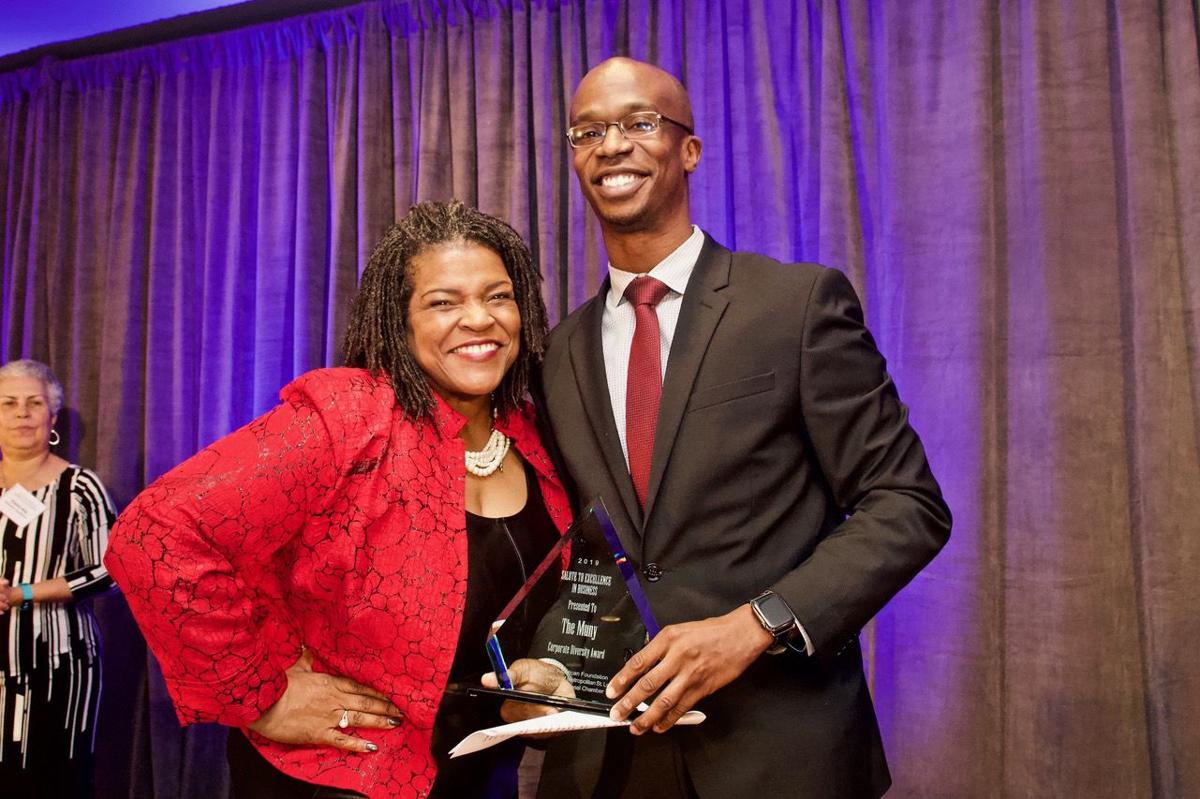 Mistress of ceremonies Carol Daniel with Kwofe Coleman, Managing Director of the Muny. He accepted the 2019 Corporate Diversity Award on behalf of the organization Thursday at the St. Louis American Foundation's 20th Annual Salute to Excellence in Business.

2019 Entrepreneur of the Year Michael B. Kennedy of KAI and Up Companies accepting his award Thursday at the St. Louis American Foundation's 20th Annual Salute to Excellence in Business Luncheon Thursday at The Frontenac Hilton.

Mistress of ceremonies Carol Daniel with Kwofe Coleman, Managing Director of the Muny. He accepted the 2019 Corporate Diversity Award on behalf of the organization Thursday at the St. Louis American Foundation's 20th Annual Salute to Excellence in Business.

By the time 2019 Entrepreneur of the Year Michael B. Kennedy stood at the podium quietly weeping with pride to receive the same honor his father had received nine years ago, the St. Louis American Foundation’s 20th Annual Salute to Excellence to Business was thoroughly a family affair.

Kennedy’s two predecessors at the awards podium — 2019 Non-Profit Executive of the Year Cassandra Brown Ray and 2019 Corporate Executive of the Year Bill Bradley — both gave such moving tributes to their families, especially their spouses, that emcee Carol Daniel followed up both of their speeches by sending an imaginary love text to her husband.

Bradley, who is vice president of Community Affairs for Anheuser-Busch, even blew a kiss to his wife Tiffany in mid-speech. “He is putting the other men to shame!” Daniel said.

Daniel also made a family connection to the 2019 Corporate Diversity Award recipient, The Muny. The award was accepted by Managing Director Kwofe Coleman, a young black man. Daniel mentioned that her son is interested in theater. “It means so much for him to see himself in you in his hometown,” Daniel said to Coleman.

Along with family, the other theme that connected the event was God. That keynote was struck in the blessing of the meal by Pastor Larry Lee, leader of Agape Christian Center and a past Salute to Business award recipient (2016 Entrepreneur of the Year as CEO of Andy’s Seasoning). Lee prayed for blessings from the “God of excellence,” a powerful spiritual reference to the Salute to Excellence program.

Ray, who is chief financial officer at the Saint Louis Zoo, made a biblical reference to her employer as the “Noah’s ark of the 20th century” trying to save animal species from extinction. Then she quoted from Ephesians 3:20. The banquet room at the Hilton St. Louis Frontenac was transformed spontaneously into a church sanctuary as, from all corners of the audience, people recited along from memory: “Now unto him that is able to do exceeding abundantly above all that we ask or think, according to the power that worketh in us.”

Kennedy also quoted from scripture (Mathew 17:20, a testimony to faith moving mountains). But even more spiritually powerful was his testament to the faith of his father, Michael Kennedy Sr., who founded KAI Enterprises and then handed the reins to his son (who since founded and also leads the UP Companies as well).

“I watched my father every day get on his knees and pray before he went to work,” Kennedy said.

He then spoke directly to his father watching him from the audience. “I miss you, Dad,” Kennedy said. “I wish you were in the office more. I need those prayers.”

World Wide Technology doubled as lead sponsor, along with the Steward Family Foundation. For all of the family love and spiritual depth of the event, a little business did get done. Ann Marr, vice president of Human Resources for World Wide Technology (and 2009 Entrepreneur of the Year), put the Salute to Excellence in Business in the context of the St. Louis American Foundation’s entire Salute program, including the Salute to Excellence in Education, through which millions of university scholarships have been facilitated.

“These are people we want to hire,” Marr said of Salute scholarship recipients. “Bring them over to us.”

CDC reports that Hispanic, Black workers most impacted by COVID-19 at meat plants

Kennard school should not be named after a Confederate lieutenant

St. Louis' 'Close The Workhouse' Campaign gears up to close the deal

Kevin Hart still feels 'lucky to be alive' after crash