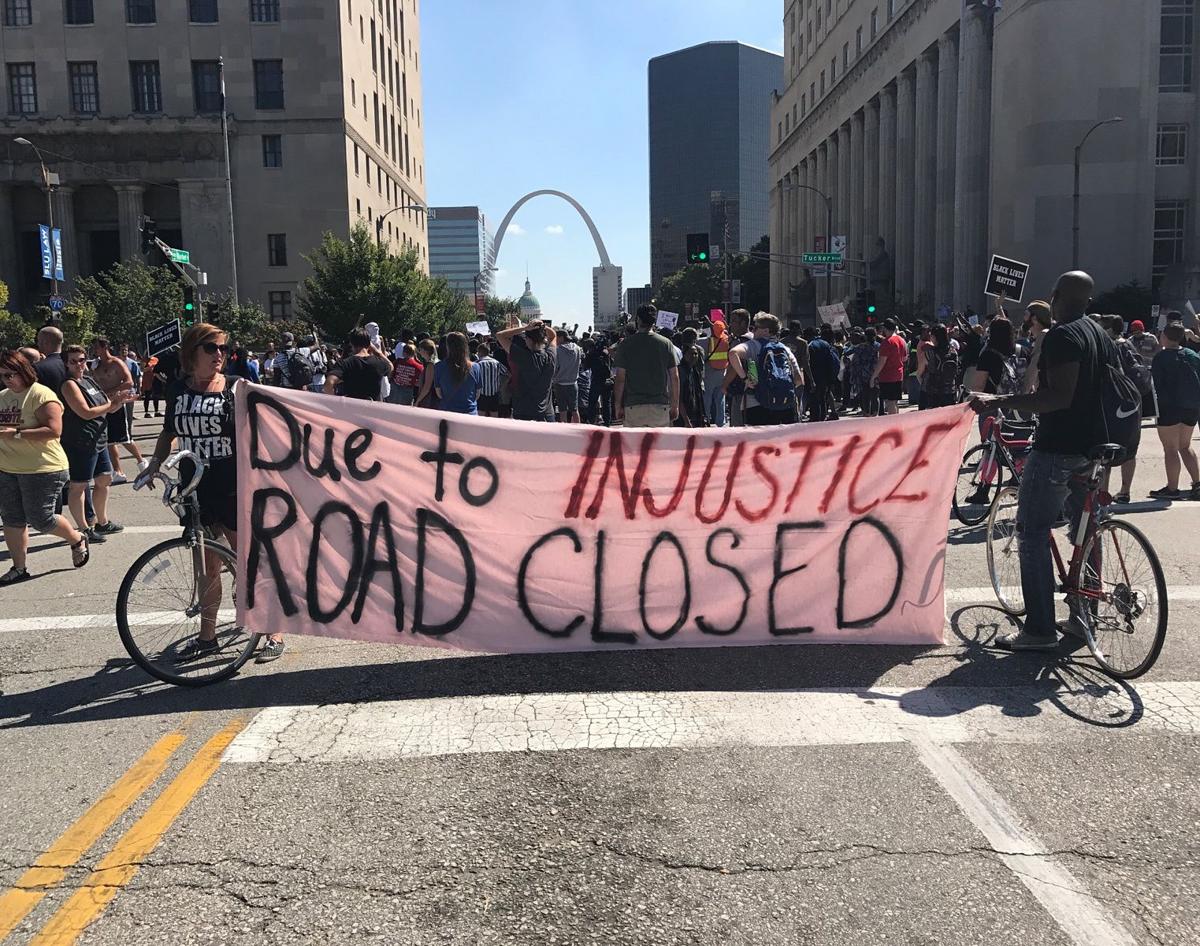 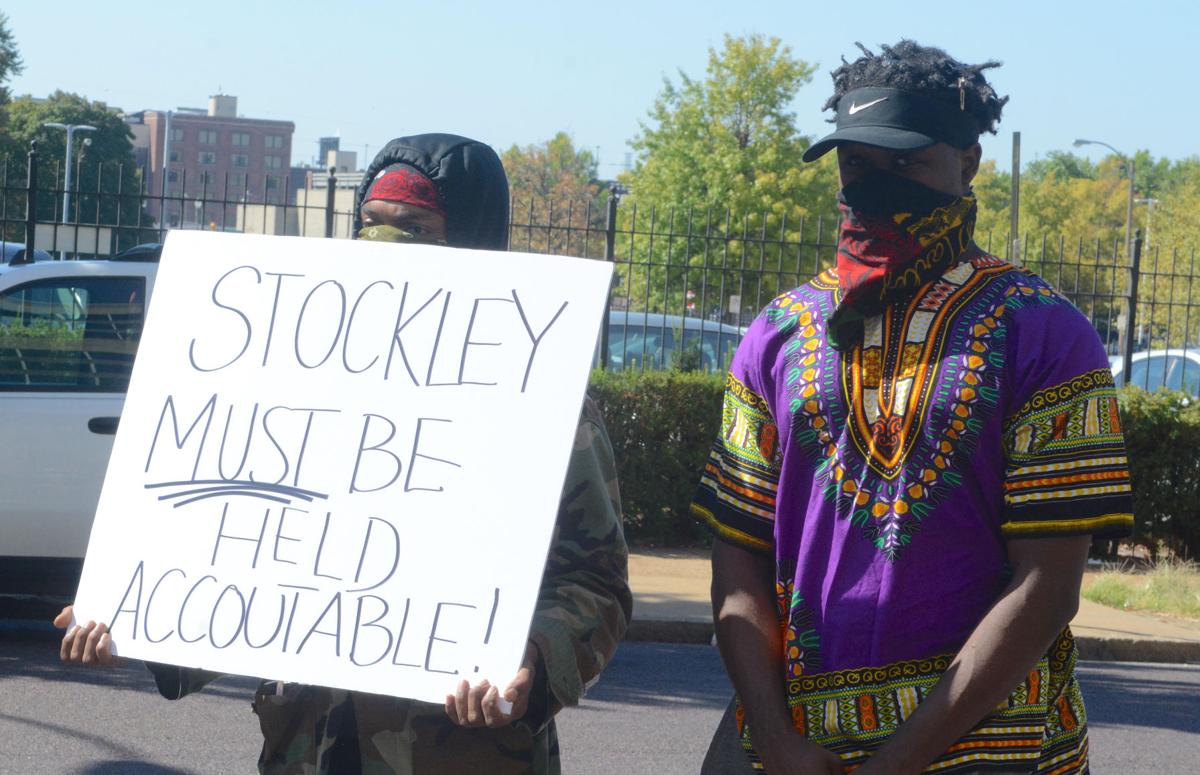 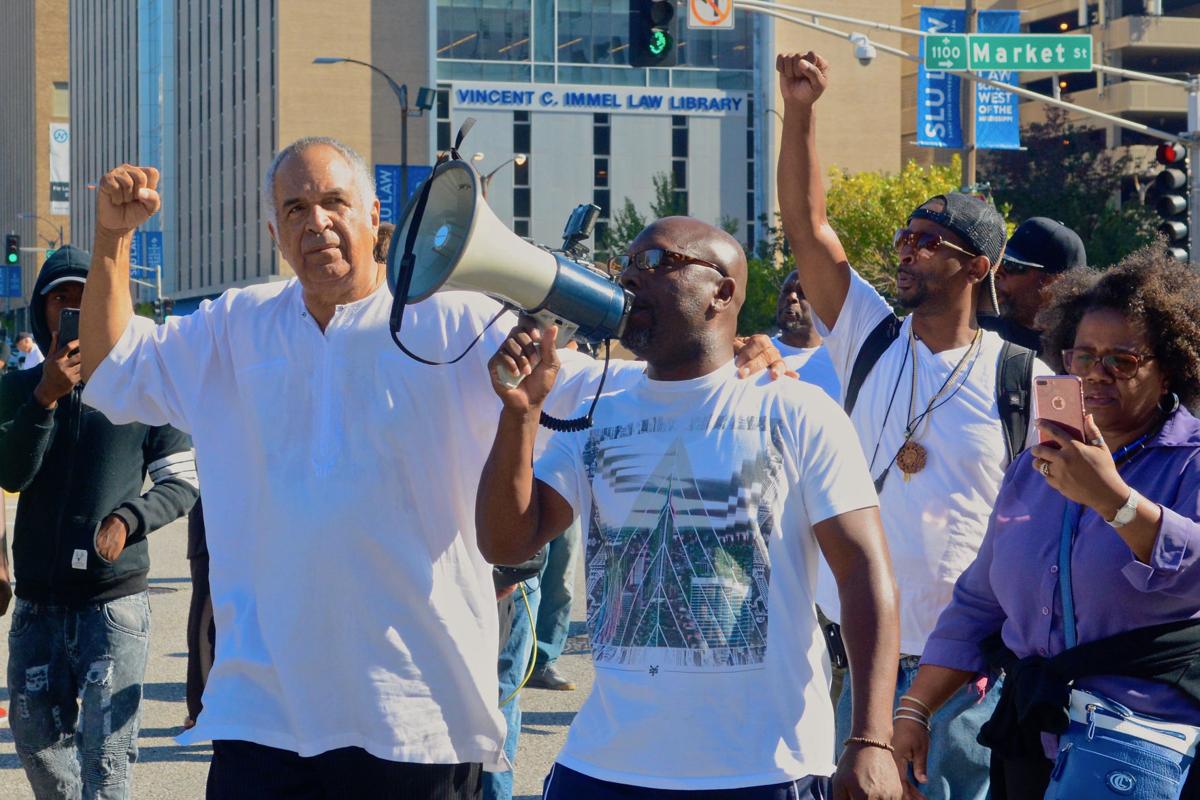 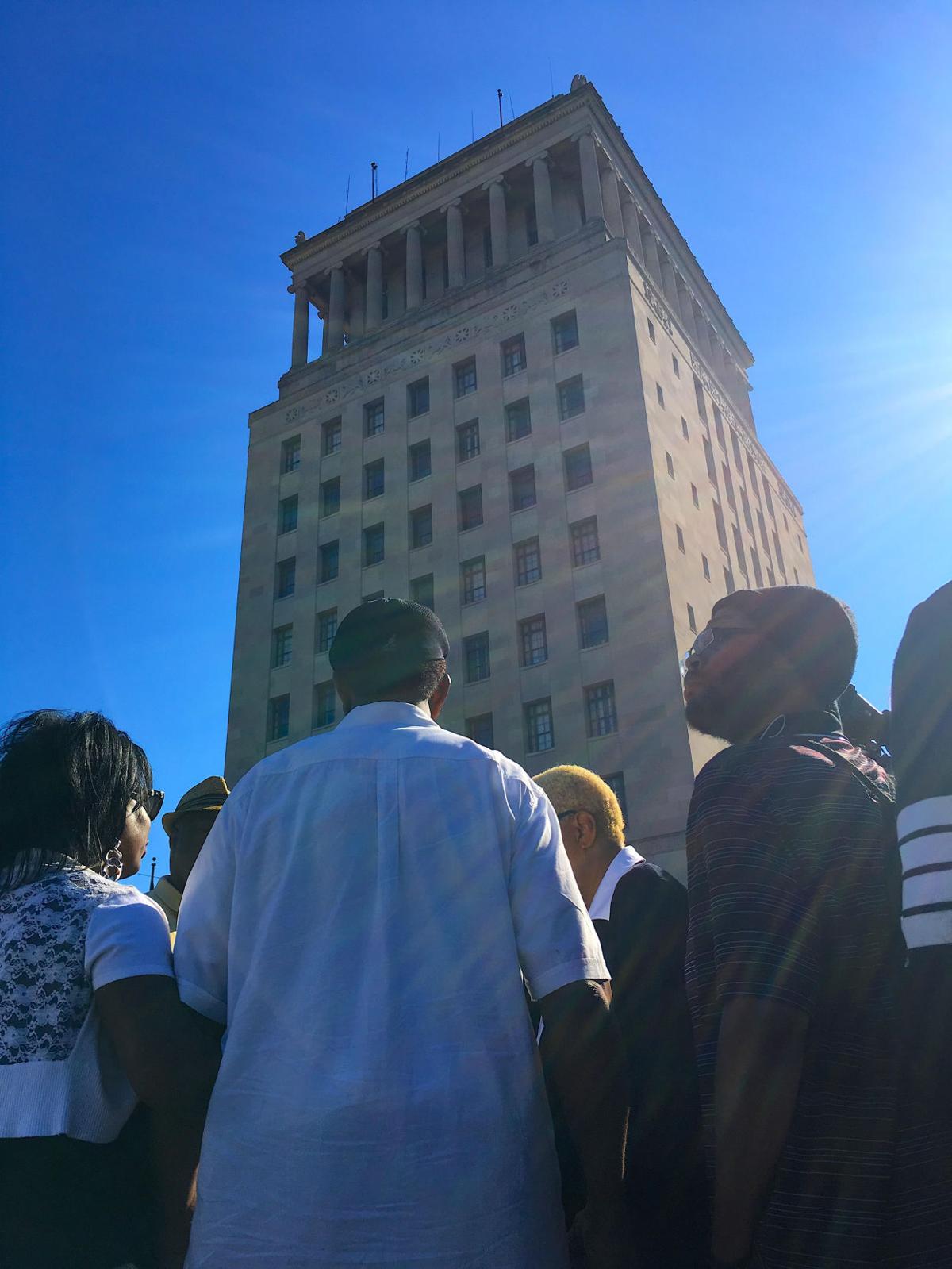 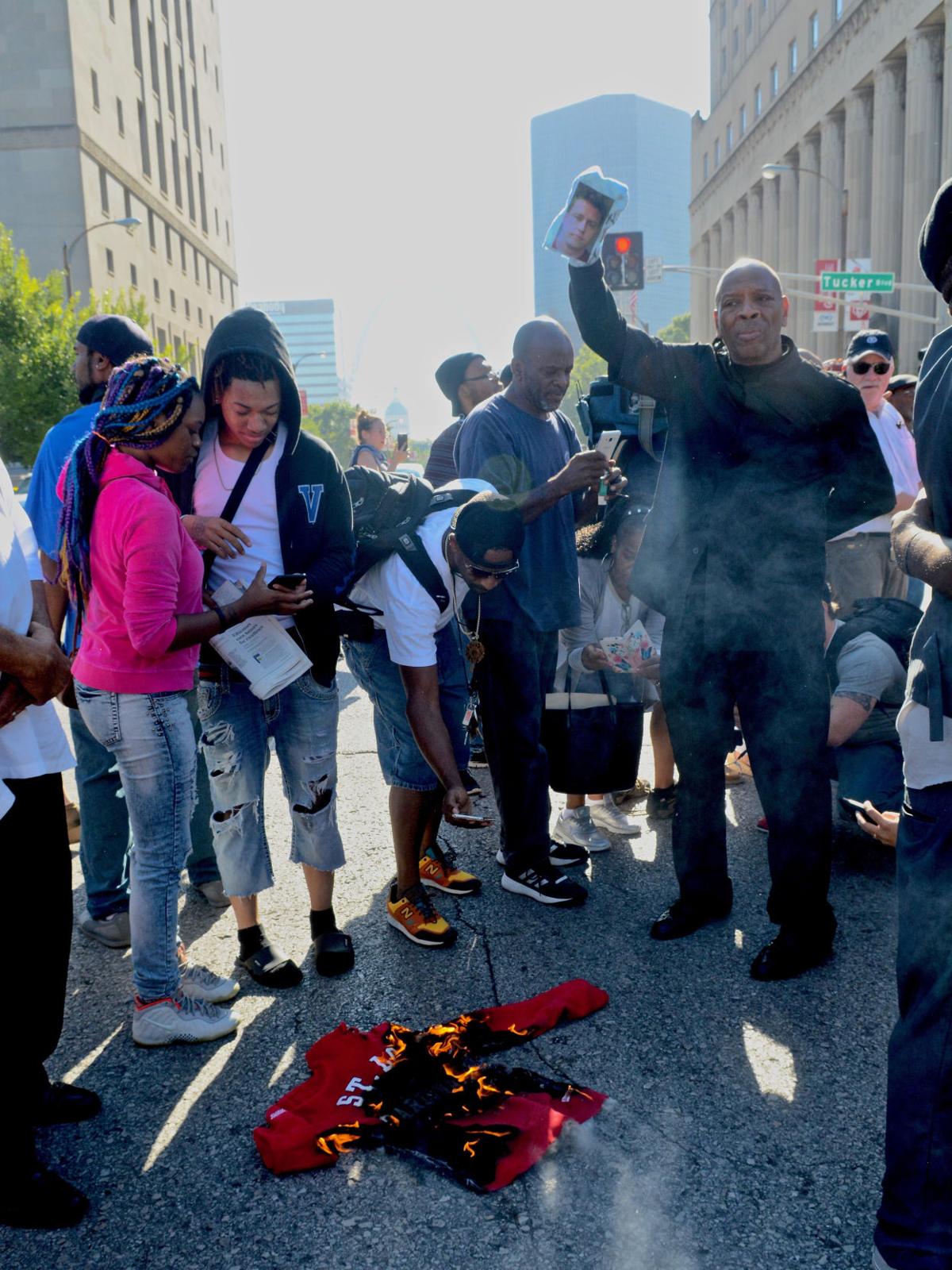 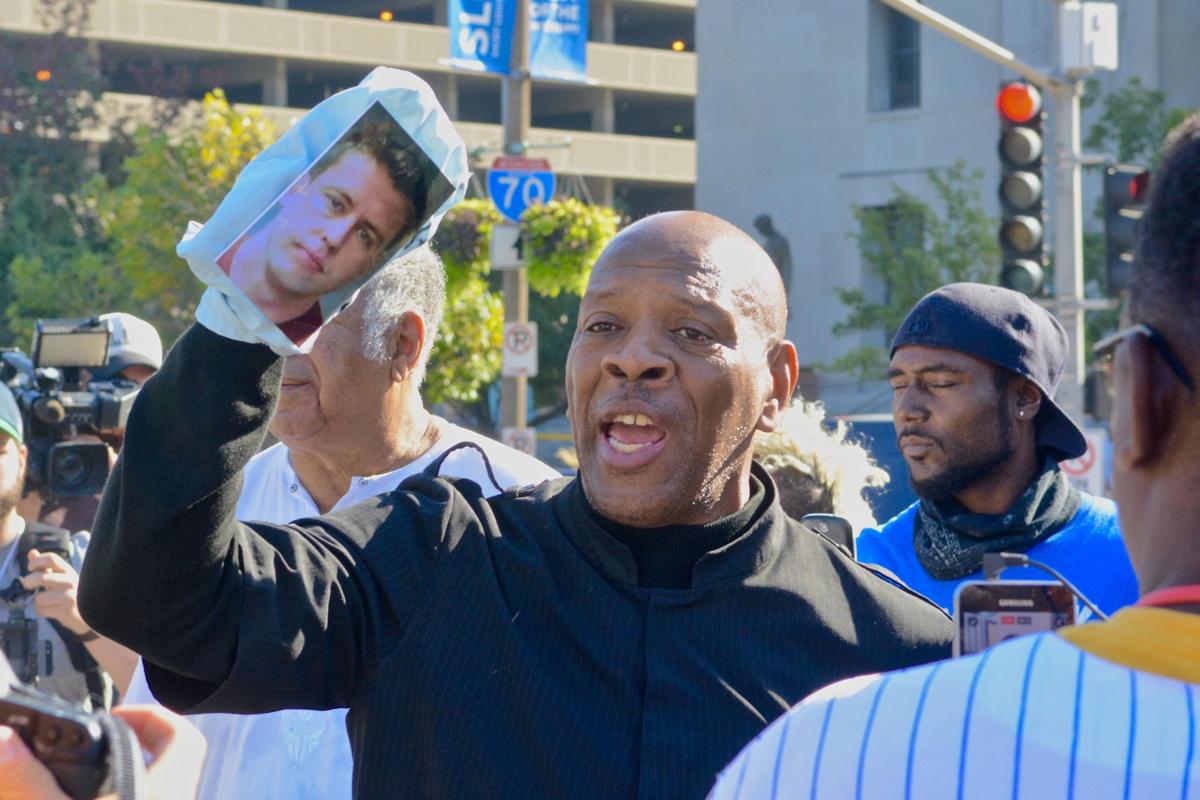 Activist Anthony Shaheed wears a puppet of Jason Stockley while protesting at the intersections of Market 7 Tucker Blvds. Friday morning. Protesters took to the streets after Jason Stockley's verdict came back as not guilty. Photo by Wiley Price / St. Louis American

Activist Anthony Shaheed wears a puppet of Jason Stockley while protesting at the intersections of Market 7 Tucker Blvds. Friday morning. Protesters took to the streets after Jason Stockley's verdict came back as not guilty. Photo by Wiley Price / St. Louis American

"No justice! No peace! No racist police!”

This was the most dominant chant at the protests responding to the not-guilty verdict for former St. Louis police officer Jason Stockley, which began on Friday, September 15 outside of St. Louis City Hall. Another frequent refrain was “the whole damn system is guilty as hell.”

Protestors reacted with anger and sadness to St. Louis Circuit Judge Timothy Wilson’s acquittal of Stockley, who was charged with first degree murder in the 2011 shooting of 24-year-old Anthony Lamar Smith. Many called for an economic boycott in response to the verdict.

“This was an open and shut case to me,” protestor Gwendolyn Cogshell said. “It was like Rodney King. Everybody saw what happened on TV and heard was what said.”

On a dashcam video, Stockley is heard saying to his patrol partner that he was going to kill Smith, who was fleeing police, and then 45 seconds later, after Stockley told his rookie partner to stop Smith’s car by crashing into it, Stockley shot Smith five times and killed him.

Cogshell said that the verdict was symptomatic of both patterns of racial injustice through the country, and a failure of the government and justice system in St. Louis specifically to treat black citizens as equal. She said the right way to fight back was with boycotts.

“Stop spending money,” Cogshell said. “Get groups and clergy to tell people not to come to St. Louis. We’re not going to be respected. It’s like taxation without representation.”

Several streets around the area of Market and Turner streets in downtown St. Louis were blocked by protestors and police vehicles. Other streets, many businesses and some schools in the area voluntarily shut down. A temporary flight restriction was also issued over the protest.

The group at one point attempted to enter an interstate ramp, but was blocked by police. The protest then marched to St. Louis Metropolitan Police Department (SLMPD) headquarters and then back to City Hall, where they were met with police officers in riot gear.

At least one protestor has been arrested; the SLMPD announced that a male suspect was taken into custody at Washington Avenue and 14th Street after allegedly damaging a police vehicle. He was charged with Destruction of Property and Failure to Obey.

The protestor was riding a bicycle and did not appear to be resisting arrest.

“He tried to slow down the police car, and it almost hit him,” an ACLU legal observer present at the protest said.

Another protestor passed out face masks and bandages to those in the crowd.

Many St. Louis and Missouri-based advocacy groups have issued statements condemning the verdict, including ArchCity Defenders, a nonprofit legal firm that represents victims of police violence.

“This devastating verdict reinforces the message that law enforcement can use fatal, excessive force against communities of color and turn to the courts for protection,” the statement read in part. “The egregious facts of this case underscore the failures of the criminal legal system even in clear-cut cases of police violence.”

There were scenes of conflict at the morning protest. At Market Street, one white protester took the megaphone to urge those gathered to work for police reform and transparency, telling them, “You must not give up. You must keep going, regardless of failures.”

Several black protestors objected. One said, “Don’t tell us not to be mad.”

Protestor Eddie Littleton, who said he has been involved in activism in St. Louis since the fatal police shooting of Michael Brown in Ferguson, hoped the St. Louis community would come together to speak out against the verdict.

“I’m basically out to let the people know to come out, to vote, and let’s face the system,” Littleton said. “It’s not right. Let’s let it be known by all.”

Littleton was also supportive of using economic means to get the protestors’ point across, saying he hoped the money lost by businesses and events over the weekend would make an impact.

“Let’s let this system feel what we feel. It hurts us, we want to hurt them. We want to keep it peaceful, though. I’m not for violence. We want to hurt it where it hurts the most – in their pockets.”