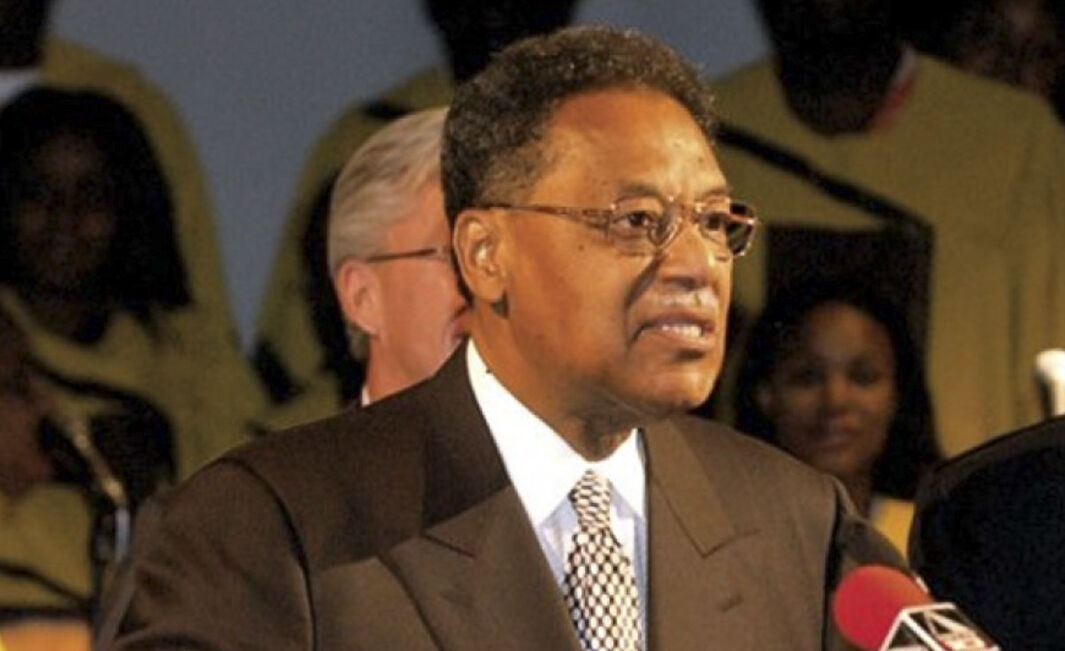 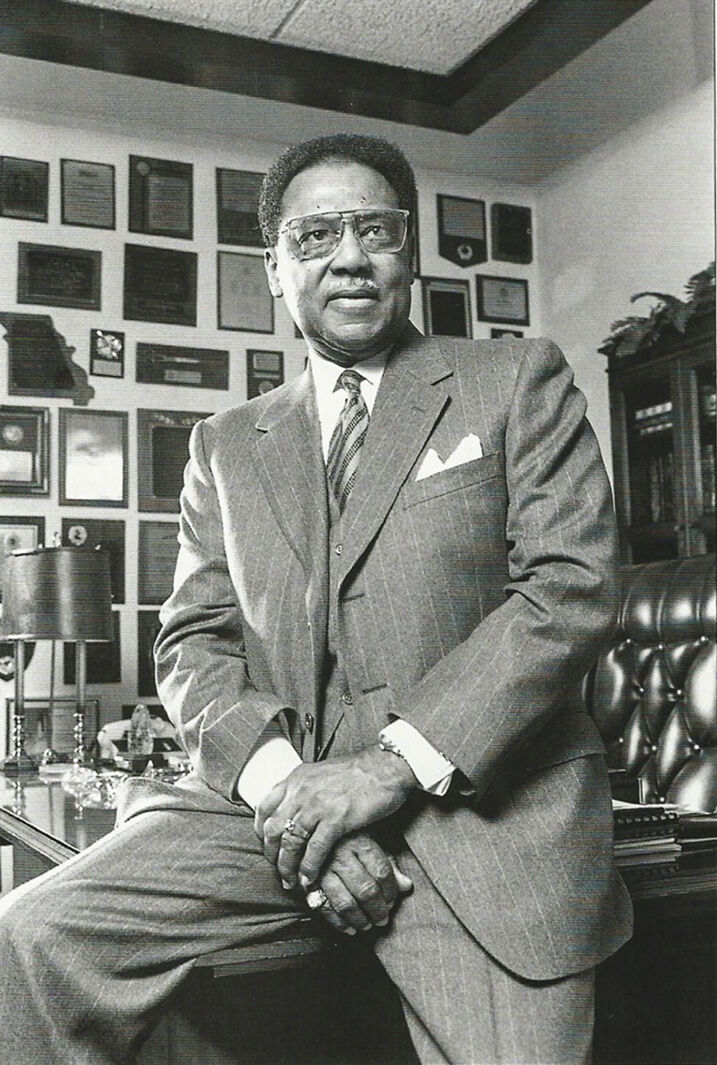 Henry Givens is credited with saving Harris-Stowe University from closure.

Henry Givens Jr., the university president whose name became synonymous with Harris-Stowe, the college he rescued, transformed, nurtured and led for more than three decades, has died. He was 90.

In a 1993 profile, Givens said it was “a pleasure to work in my own town, among the friends that I grew up with.”

He grew up in St. Louis’ storied Ville neighborhood, 10 minutes from the small teaching college that he would lead for 32 years. When he arrived in 1979, many thought the school was on the brink of extinction. Givens had other ideas.

During his tenure, Harris-Stowe’s student enrollment tripled, one building morphed into seven, and the single elementary education degree it offered grew to 14 baccalaureate programs.

Givens, who once said he never dreamed he could be a university president, died Tuesday, July 20, 2021 at his home in St. Louis of unknown causes.

He was always keenly aware of why and for whom he worked.

“If this place closed down, 98 percent of our students wouldn’t be able to go to college,” he said in his profile in "Lift Every Voice and Sing: St. Louis African Americans in the Twentieth Century."

Givens wasn’t about to let that happen on his watch.

Givens grew up at 4349 N. Market St. in the Ville, once the city’s Black cultural center. Acclaimed Black historian Julia Davis, for whom a library is named, lived on his street.

She taught Givens at Simmons Elementary School, which he described as “the best elementary school in the city of St. Louis.” He felt similarly about Sumner High School, from which he graduated in 1950.

In 1954, Givens graduated from Lincoln University in Jefferson City, the Supreme Court struck down school segregation — and Stowe Teachers College for Black students was folded into white Harris Teachers College. The Stowe name disappeared and did not reclaim its rightful place alongside Harris until 1976.

Former U.S. Rep. William Lacy Clay Sr. had known Givens since they were in high school — even though the two did not attend the same school.

“He was energetic and industrious and was part of this community,” Clay said. “… He was very supportive in organizing ward organization and was the most dominant political factor in force in St. Louis for 50 years.”

Clay said Givens was involved in a variety of community activities throughout his life.

“He was a fantastic individual in the community,” he said.

Right out of Lincoln, Givens began teaching fifth and sixth grade and physical education at the old Douglass School in Webster Groves. He was the school’s only male teacher.

“I loved it,” he said, but he was about to become a full-time administrator.

To integrate Douglass, administrators wanted a program “unlike anything in the nation” to attract white students.

Givens designed such a program. He had walls torn down and floors carpeted. He introduced team teaching and multiage grouping of students. Then he sold the new concept to the community.

White teachers and students flocked to the school, which became the model for today’s magnet schools. Within two years, Douglass was fully integrated with a two-year waiting list and top national achievement levels.

In 1973, Givens became the first African American assistant commissioner of Missouri’s Department of Education, where he orchestrated the merger of the Berkeley and Kinloch school districts with the Ferguson-Florissant School District.

He left the commission to accept the job of president of Harris-Stowe State College in 1979, just as control of the financially ailing school was being transferred from St. Louis Public Schools to the state. State Sen. J.B. "Jet" Banks, once Missouri’s highest-ranking Black official, led the legislative effort.

Most observers thought Givens would be overseeing Harris-Stowe’s demise. Instead, he built the college into a midtown landmark and community meeting place.

There was only one building, which formerly housed Vashon High School, and the school offered only an elementary education degree.

When he retired in 2011, the original building bore his name because he had changed the landscape of the school’s midtown location and created a full-fledged campus.

His vision and shrewd negotiating added six buildings, including two residence halls and a student center to accommodate approximately 2,000 students.

He paid the city $10 for the land under the decaying Laclede Town federal housing and $10 for the old Vashon Community Center and its three surrounding acres. Later, he persuaded the state to give the school a great deal on a building to house a satellite business school in south city.

It took 12 years to persuade the legislature to permit Harris-Stowe to offer more degree programs. He succeeded in 1993, with the help of U.S. Rep. William Lacy Clay, then a state senator, who wrote the legislation.

“We talked regularly, whether I was in D.C. or St. Louis, we called each other and spoke on a regular basis — probably once a week just to check in,” Clay Jr., said.

“He was very intellectual, precise and caring of others. He cared about his community, cared about the people in it, he cared about the young people who came through those doors at his university and he always had time for others.”

In 2005, with its expanded curriculum, the school replaced “College” with “University.”

“We were very close and had a phenomenal relationship,” said former Harris-Stowe President Dwaun J. Warmack.

Warmack, who now serves as president of Claflin University in Orangeburg, South Carolina, credits Givens with landing him his first seat on a corporate board.

“He was more than just a mentor. He was a father figure. We talked every Friday, including last Friday.”

“He was an innovative educator and administrator, a visionary whose legendary determination and hard work helped lead to his remarkable successes that included global projects. But it was his undeterred dedication to Harris-Stowe and its mission to provide greater opportunity to thousands of the underserved that places him high in the pantheon of extraordinary St. Louisans.

“I hold him in high esteem for his passion and commitment to service, but I also cherish the long personal friendship I enjoyed with him and his beloved wife, Belma. Although I am deeply saddened by his passing, I will never forget him nor all the great work he did for others.”

“He worked tirelessly to expand the reach and reputation of Historically Black Colleges and Universities. I announced my first run for the Senate at Harris-Stowe State University and was on the campus with Dr. Givens many times during his presidency.

“I will miss seeing him at the annual Martin Luther King, Jr. Celebration in St. Louis and benefitting from his advice. He was a good friend and an exceptional role model.”

Two campuses at once

In 1987, Givens succeeded in getting Harris-Stowe the federal designation as a historically Black institution. It’s one of two in the state, the other being Lincoln University, Givens’ alma mater.

The move was not made to erase half of the school’s heritage; it was another effort to keep the school afloat. The status made Harris-Stowe eligible for as much as $2 million annually.

That same year, Gov. John Ashcroft (whose nomination for U.S. attorney general he would later oppose) asked Givens to take over his financially strapped alma mater. For months, he split his time between the two campuses, working six days a week.

“I didn’t even know where I was,” Givens said in "Lift Every Voice." But he reduced Lincoln’s projected deficit from $1 million to $50,000.

Helped by the business relationships he cultivated, he became a prolific fundraiser. The year prior to his retirement, Givens led a $45 million fundraising campaign, the most successful in the school’s history.

But sometimes, the business relationships were fraught.

For 30 years, prominent Black leaders and members of Civic Progress, executives from the region's largest companies, met monthly to discuss racial issues. The meetings ended in 1998, when Givens and other group members said they were not treated as equal partners in the dialogue.

St. Louis’ racial divide was his only disappointment, he said in his profile.

“We’re doing a lot of good,” he said, “but St. Louis is not going to be a great city until racism is wiped out.”

No matter the obstacle, Givens persevered and willingly shared his optimism and expertise.

From its inception in 1986 and for the next 25 years, Givens chaired the Dr. Martin Luther King Jr. Statewide Celebration Commission. It became the second-largest celebration in the nation paying tribute to King.

He served as a consultant for the State Department’s American School in Lima, Peru, and was recognized by more than 100 national, state and local organizations for his service.

His mother was a homemaker whose activities included volunteering with the Pine Street YMCA. The “Y” ran Camp Rivercliff near Bourbon, the first camp in Missouri operated by and for African Americans. It’s where Givens spent his childhood summers.

His father worked multiple jobs to support the family — driving for a printing company, repairing radios and TVs, even deejaying local dances, sometimes assisted by his sons.

The dapper Givens had a singular work path. He said choosing education was his “proudest achievement,” second only to marrying Belma Evans in 1955 and raising their children.

Survivors include his wife; a son, Keith Givens of Phoenix; a daughter, Stacy Givens of St. Louis; and three grandchildren.

Gloria S. Ross is the head of Okara Communications and AfterWords, an obituary-writing and design service.