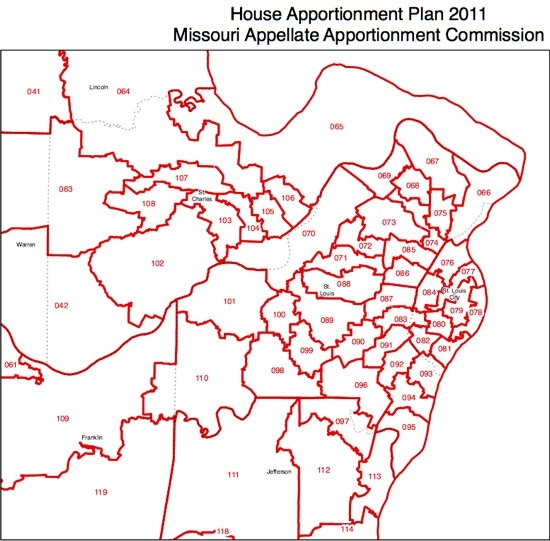 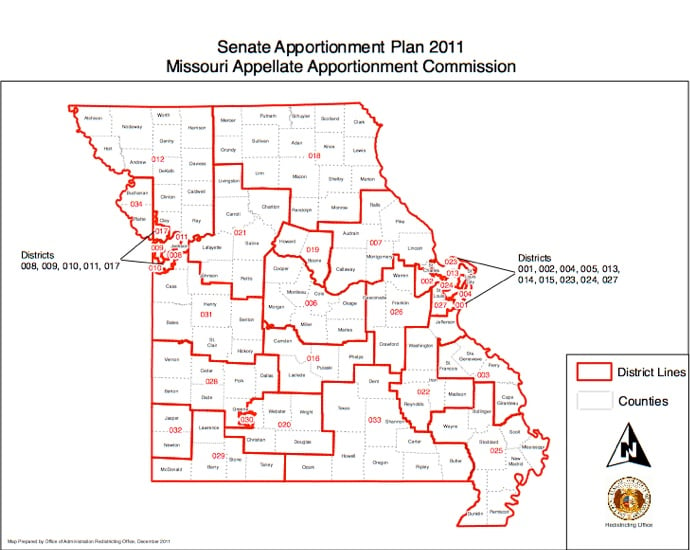 “Down here it’s just winners and losers, and don’t get caught on the wrong side of that line.” That was Bruce Springsteen singing about Atlantic City in 1982, but the same could be said in 2011 – and, especially, 2012 – of individuals who want to serve in the Missouri Legislature. And the “line” in this case is quite literal – the redistricting line drawn by the Missouri Appellate Apportionment Commission and announced last week.

Two solid African-American state representatives in North County – state Rep. Steve Webb and state Rep. Sylvester Taylor – now find themselves in the same district, with no open seat surrounding them. The EYE understands they have not stuck a deal, and neither is looking at new real estate on the other side of that line – though in general the redistricting map will be good for the real estate business, as a number of incumbents and wannabes are now looking for a new address in a different district.

Also in North County, two other incumbent African-American state representatives – state Rep. Clem Smith and state Rep. Sharon Pace – now find themselves in the same district. In this case, an adjacent district now has a majority of minority voters, and Pace is expected to get on the real estate market and run against Churie Spreng, who is not black.

The bad news in state rep districts in the city of St. Louis could be some good news in disguise.

Recall when Missouri Democrats had a hand on the redistricting pen, state Rep. Jamilah Nasheed and state Rep. Penny Hubbard were drawn into the same district, as apparent punishment for working across the aisle with Republicans. The judges instead have Nasheed jumbled in with state Rep. Chris Carter and state Rep. Karla May.

They have, however, sorted out their problems, with Carter running in the district, May getting into the real estate market and – the juicy part – Nasheed running for state senator against Robin Wright-Jones. Nasheed is full of fire following a legislative session where she showed real, if controversial, leadership and deal-making savvy, and Wright-Jones has been licking her wounds over laughably bad campaign finance reporting, with her fundraising prospects at next to nil. Partisan political junkies can thank the judges for this one. Of course, so can any lurking non-black senatorial hopeful who envisions a split black vote.

Penny Hubbard, by the way, is not in the clear. She is now in the same district as state Rep. Jeanette Mott Oxford, who is termed out, but there are any number of smart progressives just like her on the near South Side. Some of those 6th Ward dreamers who wish Alderman Kacie Starr Triplett were not so totally electable can now set their sights on the state House.

There is also good news in state House districts for the black caucus, which again will be good news for area realtors.

State Rep. Eileen McGeoghegan now finds herself in a majority minority district and can expect an African-American challenger. So does state Rep. Rory Ellinger, but Ellinger’s proven and outspoken commitment to the broad interests of his district would make him tough to beat. That doesn’t mean no one will be lining up to try.

In the Senate, it was mostly good news for incumbent African Americans, except for Wright-Jones, who kept a safe district but picked up a scrappy challenger because of changes to Nasheed’s House district.

Wright-Jones, State Senator Kiki Curls and state Sen. Maria Chappelle-Nadal all retain districts that are 66 percent minority constituents or better. They were better served by the judges, who drew better majority minority proportions than the Democrats did. Due diligence was rewarded, as the senators who testified before the judicial commission all got at least a little of what they wanted, with the exception of state Sen. David Pearce, who was redistricted out of a job. He now represents the 31st District, but unless he moves his house will soon be in the new 21st District.

One of Chappelle-Nadal’s requests was to keep school districts together and undivided. She mostly got that, though she lost the Ritenour School District which has a large Hispanic population.

More good news: two Republican state senators who have been effective advocates for the St. Louis region’s economic development interests – state Sen. Eric Schmitt and state Sen. John Lamping – will run in districts that look like the districts where they ran and won. Lamping now has state Sen. Jane Cunningham for company, as her current district was drawn out-state.

And the 13th District where state Sen. Tim Green is term-limited is now a 59 percent majority minority district, which could bode well for Redditt Hudson, provided the Steve Webb/Sylvester Taylor logjam doesn’t throw another electable African American in that race. Hudson already will have his hands full with Gina Walsh.

According to the judicial commission's announcement, as reported by The Beacon:

“The Senate redistricting plan has an overall difference in population of 7.46 percent between its largest and smallest districts. The new plan has four African-American majority districts.”