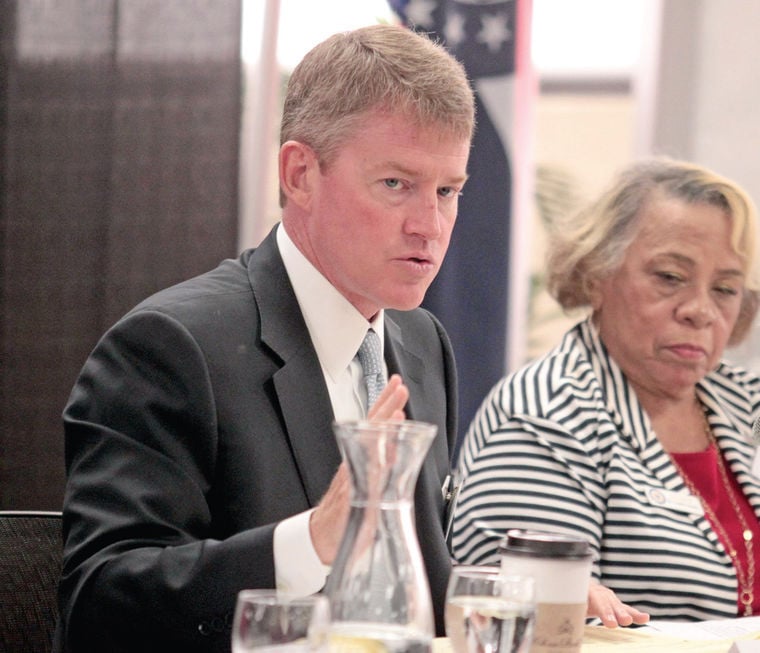 Chris Koster and Esther Haywood, president of the St. Louis County NAACP, in a file photo from October 2014. Photo by Maurice Meredith

Chris Koster and Esther Haywood, president of the St. Louis County NAACP, in a file photo from October 2014. Photo by Maurice Meredith

Chris Koster, the current Missouri attorney general and former state senator and Cass County prosecutor, is the Democratic nominee for Missouri governor on the November 8 ballot. A former Republican – he switched parties just before he ran for attorney general as a Democrat – Koster faces Eric Greitens, an untested politician who has never held public office, but prevailed in a lively four-way Republican primary election. Koster sat down with The American on October 7 for a long, on-the-record interview, which has been lightly edited for space and continuity.

The St. Louis American: Do you support Hillary Clinton for president?

The American:What are some of your reservations about Hillary Clinton as president?

Chris Koster: I'm to the right of her on the Second Amendment. I wish she were a warmer candidate, or something – whatever the word is that everybody knows, but nobody can put their finger on.

The American: You supported the bill that extended the concealed carry provision to people without firearms training and that passed the Stand Your Ground provision. How do you defend that?

Chris Koster: The reality is Missouri is one of the most gun-friendly states in the nation, and a governor – particularly a Democratic governor – only has four years to try and make Missouri a better place. And so I will choose to spend my time on things that can have an effect and can pass this Legislature. And so my time will be spent on things like health care, moving a Ferguson agenda forward, fully funding education and not investing valuable time in other matters.

The American: Your position on body -worn cameras for police departments?

Chris Koster: Strongly favorable toward it. I think that it has to be a local decision, but I want to do everything that I can in Jefferson City to make that decision as logical and easy for a local department to make as we can, including the possibility of creating financing for the cameras. One of the objections that police officers have had is that they don't want to be seen as stringers for the evening news, and they're very vehement about this. That means not releasing the videos immediately to the media, but rather to the family, and then it's for the family to decide what to do with it.

The American: Your position on who investigates police-involved shootings. Local prosecutors or someone else?

Chris Koster: I have decided that local prosecutors should. Localized decision-making has been the history of the state, in all periods of time.

The American: What did Jay Nixon do wrong in Ferguson? What would you have done differently?

And then we need to move the Ferguson agenda. I still think that there's a lot that can be accomplished and is not far beyond our reach. I will ask that the Highway Patrol be put in with body cameras. We have 14,500 peace officers in the state of Missouri, and we have no idea how many of them are from minority communities. So, if I manage the Department of Public Safety, we'll keep that statistic right from the get-go. If we've got 14,000 officers, then we're going to need 3,000 that are from the African-American community, and we don't have that now. That's how we end up with a situation where a 96 percent white police force is policing a community that's 70 percent African-American. And then with the governmental overlay driving revenues out of that police department through the municipal court system – that was a tinderbox that was waiting to be lit.

The American: What did Bob McCulloch do wrong in Ferguson?

Chris Koster: The back and forth of not getting along with the governor. We were in a national – if not international – crisis, and the antipathy (or whatever word you want to apply to the relationship) was not an excuse to fail to cooperate and coordinate.

The American: What about announcing the lack of an indictment after rush hour at night when all of the protests had gone wrong at night? Would you have done that differently?

The American:The new criminal code, which is taking effect soon, will add another 2,000 inmates to our already overcrowded prison system, if present prosecutorial judicial practices remain as is. That means building another prison, and adding another hundred million or two to the Department of Corrections budget. What exactly, given all this, should criminal justice reform look like in Missouri?

Chris Koster: I am against building another prison in this state. We have just a hair over 30,000 beds, and if anything we need to re-prioritize how we use those beds. The Department of Corrections is at $680 million, something like that; I think it's 10 percent of the state budget. But I am not in favor of building another prison. We don't have the money to continue to dedicate to that. Every dollar that goes over there, doesn't go to filling the foundation formula. So, I would look to opportunities to work with legislators to administer the criminal code that prioritizes dangerous offenders, and de-prioritizes non-violent offenders. But I do not want to go over the 30,000 number; that’s a lot of people we have behind bars in this state.

The American:You're pro-choice. As a governor, what would you do to actually improve a woman's chances of actually obtaining a safe and legal abortion in Missouri?

Chris Koster: I was against and, like Nixon, would have vetoed the three-day waiting period. There is nothing comparative that says a man can't make up his mind on an important matter in less than three days. The notion that we do this to women and get away with it is shocking. I would use the veto pen to protect a woman's right to make her own health-care decisions.

I also will look for opportunities with the Republican party to try and find synergies where we both have a goal that is worthwhile. For example, there's 5,200 teenage pregnancies in the state every year. Both parties want to see that number lowered. There have been states that have had pilot projects around long-acting, reversible contraceptives that have been very, very successful. And having an honest conversation about teenage sexuality seems like a mature, responsible place to go.

The American:You would inherit a state Legislature with a Republican veto-proof majority. What would you do differently than Jay Nixon has done to actually get your vetoes upheld?

Chris Koster: Nixon has allowed the formality of the office to grow too high. Maybe too many security guards. He's very formal with people. I’ll be more casual and more interactive. You know, less than a decade ago I was leader of the Republicans in the Missouri Senate. They know me, they elected me. And so, because I do see myself as a conservative Democrat, I think that culturally they recognize a small-government, Second Amendment protector sitting across the table. I think that that and the agricultural stuff – the Missouri Farm Bureau endorsement – will give me a better chance to say, “Look, we've got to work on a Ferguson agenda here. It's the right thing to do for you and me, together. You can take credit, I don't have to take credit, but let's get something done.”

The American: Give me a few reasons why you're better than Eric Greitens.

Chris Koster: The primary reason is I can name the cabinet departments, and I know where they are, and I know what they do. In today's day and age, after term limits, the average state legislator has about three years of experience, and you just can't learn the workings of a $27 billion corporation in that period of time. You can’t put an inexperienced governor – a guy who's really only been around here watching the state for six months or so – on top of an inexperienced Legislature and think that this is the solution to our problems.

I know state government as well as anybody in the state of Missouri who's not named Jay Nixon. I've been general counsel to the company for eight years, I was on the Board of Directors – which is the state Senate – for four years, and before that I was 10 years in local government. I lived 16 years in western Missouri in Harrisonville, in the Kansas City metro, I've been one-third of my life in central Missouri, and I grew up here in St. Louis. I know this state – Republican, Democrat, east, west, rural, urban – in a way that has prepared me for the job.

The American:Is there anything you want to add?

Chris Koster: Fully funding the foundation formula is critically important. It's probably my number one agenda item. On the health-care issue, every day I'm talking about expanding healthcare and accepting the $2 billion into the state's system. That's our money that has gone to Washington. The federal government is trying to give it back to us. That's not to say that there aren't aspects of the Affordable Care Act that need to be fixed, and there are, but that's a federal problem. That's not my deal. We've got $2 billion that needs to be invested in health care here in St. Louis and in rural Missouri and Kansas City. And so I am eager to work cooperatively with the Legislature to find some solution where they would feel comfortable taking our own money and investing it back here in the state.