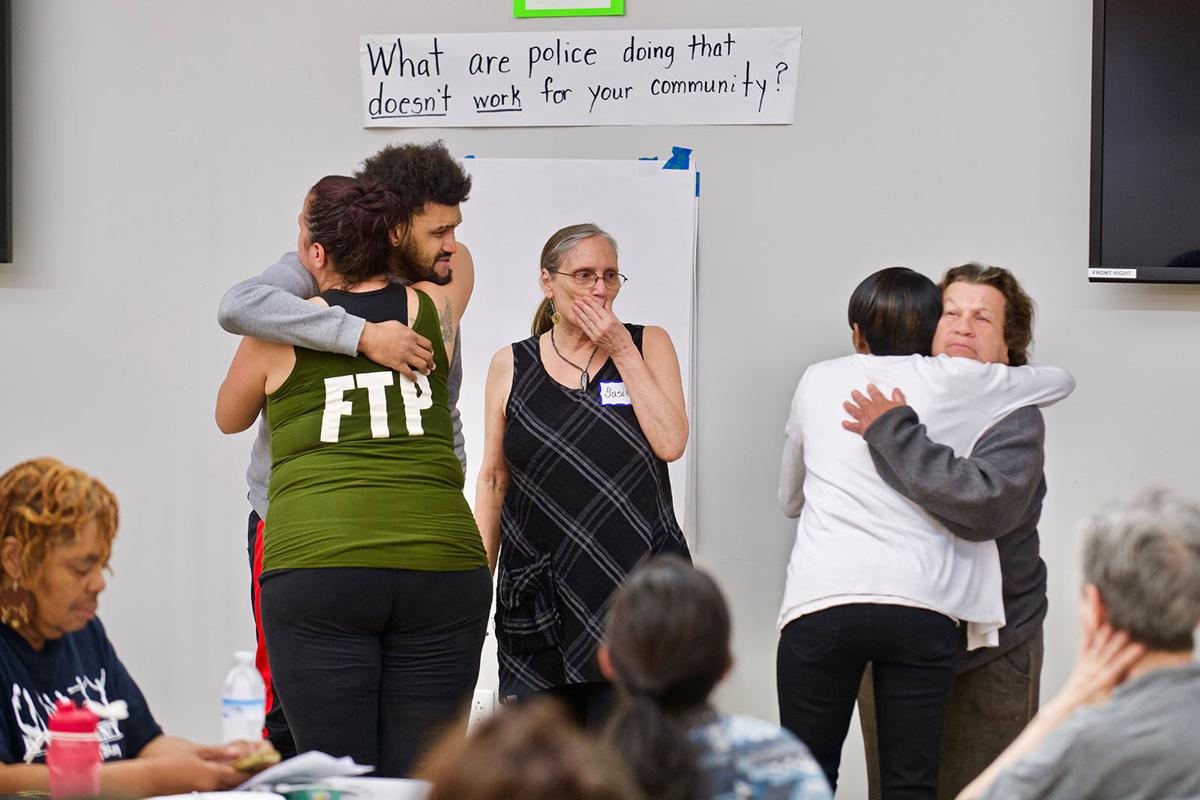 Nikko Fiertag and his grandmother Romona Williams were consoled by the community after sharing allegations of police misconduct during a public meeting on police-community issues in memory of Cary Terrell Ball Jr. hosted at the Deaconess Center for Child Well-Being on Tuesday, April 23. 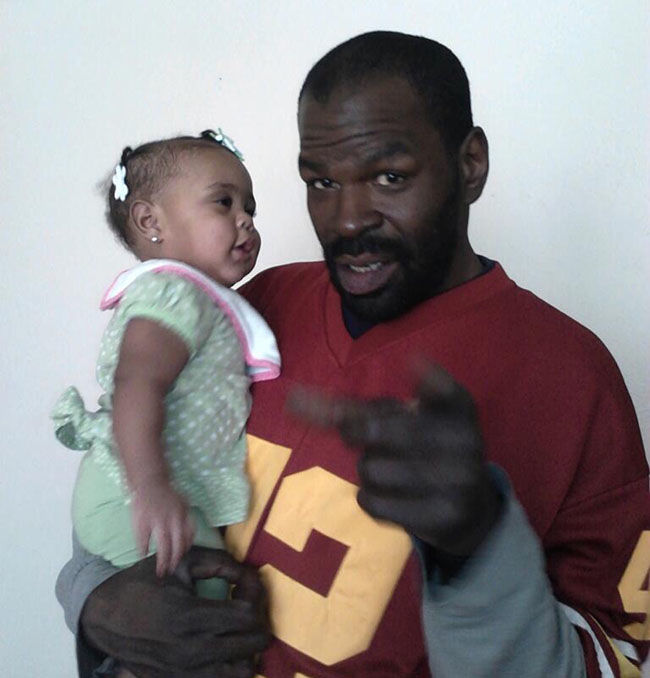 Witnesses said Cary surrendered before police shot him, and elected officials, including state Rep. Bruce Franks Jr. (D-St. Louis), have demanded that the case be reopened.

In Cary’s honor, his mother, Toni Taylor, and younger brother, Carlos Ball, held a discussion about policing in the community at the Deaconess Center for Child Well-Being on April 23.

John Chasnoff, a founder of the Coalition Against Police Crimes and Repression (CAPCR), started off the discussion talking about the meaning of community policing. At one point, the New York Police Department’s stop-and-frisk tactics fell under the department’s umbrella of community policing programs, he said. That was before a federal judge ruled in 2013 that these tactics violated the constitutional rights of minorities in the city.

“What we mean by community policing is something very different,” Chasnoff said. CAPCR supports the idea of “problem-solving policing” that is more focused on getting the right resources in the community to prevent crimes.

Cary’s family have established the Cary on the Ball Foundation, and they travel around the country to support other families who have lost loved ones at the hands of police.

“Even though our loved ones were killed by police, we grieve too,” Toni said. “Stop condemning our children. Stop the judgment. You didn’t know them.”

Romona Williams, a North County resident, stood up at the event and said she wanted the police to stop condemning her grandson, Nikko Fiertag. Since he was 17, she said, police have hounded him anytime they see him walking down the street. He is now 27.

On August 11, 2014, Fiertag was beaten and arrested during the Ferguson unrest, Williams said. Since then her grandson’s posttraumatic stress disorder is “worse than a Vietnam vet,” she said, and he will no longer walk anywhere by himself.

Two days after Michael Brown was shot and killed by a then-Ferguson police officer, Fiertag was at his godmother’s house. When it started to get dark, he heard that people weren’t just breaking into stores, they were breaking into people’s homes as well. Because he ran track, he decided to sprint home to be with his grandmother and sister, he said.

When he got to the intersection where the QuikTrip used to be (and is now the Ferguson Community Empowerment Center), police officers had formed a line on the bridge at West Florissant Avenue. People were being shot with rubber bullets, and he started dodging them like everyone else.

At some point, he said, he saw a steel-toe boot coming for his face. He was allegedly tased four times. One of the officers allegedly allowed a dog to bite his leg, and he showed the scars on his calves. He allegedly was taken behind Schnucks where they could “finish me off,” he said.

“They called me a black monkey and (n-word),” Fiertag said. “One of them said that if I got any blood on his car, he’d hit me. I coughed up blood because I was tased. He hit me in the rib, which was already fractured.”

According to an Aug.12, 2014 St. Louis Post-Dispatch article, Fiertag was “holding a pair of sneakers in his hand when he was arrested.” His booking photo shows cuts all over his face. Fiertag was charged with trespassing and stealing a value of less than $500. Williams said that they pinned him with breaking into Foot Locker, but he didn’t do it. Fiertag was not in a good mental state and pled guilty because he was scared and didn’t understand, she said.

The American reached out to Fiertag’s public defender, who is now the district defender, Stephen Reynolds about the case. He was away at a training.

After Fiertag shared his story, Toni and other mothers came up and hugged him and his grandmother. After the event, Fiertag went home and slept peacefully, Williams told The American the next day.

“He wasn’t pacing the floor all night long,” Williams said. “He found some peace.”

At the event, Toni said her thoughts were with the family of Julius Graves.

Graves passed on Thursday, April 18 from injuries sustained when he was tased and sedated by St. Louis police and fire department personnel on Saturday, April 13.

His services will be held Saturday, April 27 at Williams Temple Church of God in Christ, 1500 Union Blvd., with visitation at 10 a.m. and the homegoing ceremony at 11 a.m.

His father, Larry Graves, said his son was mentally ill and likely having a psychotic episode when police were called to the scene. He said the family welcomes the public to his services and hopes his son’s death calls attention to the need for first responders to be better trained in handling the mentally ill.

According to the St. Louis Metropolitan Police Department, Julius Graves was “acting irrationally and in a threatening manner” at a bus stop at Hampton and Clayton when they were called to the scene.

“Upon arrival, the officers located the suspect who exhibited signs of intoxication as well as expressing suicidal and homicidal tendencies. Officers attempted to engage the suspect in conversation in an effort to deescalate the incident to no avail. Due to the suspect's behavior, officers requested EMS,” a police spokesperson summarized the incident.

“Shortly after EMS arrived the suspect suddenly ran into heavy traffic across Clayton toward Hampton, and resisted officers attempts to stop him. Officers attempted to utilize their department issued tasers, however they were ineffective. EMS sedated the suspect and transported him to a hospital where he was listed in critical/unstable condition.”

The police also said that hospital staff “located suspected narcotics on the suspect and notified officers who issued him a summons” before he died.

Larry Graves said his son, who was diagnosed with paranoid schizophrenia about 20 years ago, had been tased by law enforcement twice before during psychotic episodes.

The American asked St. Louis police about any training and preparation to deal with the mentally ill on the part of the police who responded to the scene. A spokesperson said the department is restricted from providing “individually identifiable personnel records,” but that over 700 officers in the department have completed a 40-hour Crisis Intervention Training, which discusses the handling of suspected mentally ill persons.

A spokesperson for the St. Louis Fire Department also was asked for an incident report and about any training and preparation to deal with the mentally ill on the part of the EMS personnel who responded, but has not responded.

These responses will be included in this report when and if received.