It is bone-chilling to read how undercover cop Luther Hall was beaten and arrested on September 17, 2017.

In federal record, Hays has admitted that he and his colleagues saw Hall standing on the street — doing nothing criminal or suspicious — thought he was a protestor, threw him to the ground and beat him. Hall is permanently injured, according to Hays’ guilty plea.

And according to Hays’ text message included in the agreement, he told Boone the next day, “if it was a protester it wouldn't be a problem at all.”

Hays’ plea mentioned two unnamed officers, labeled Officer A and B. Federal prosecutors plan on going to a grand jury sometime before Thanksgiving or early December to seek an indictment of others related to the beating, according to the Post-Dispatch. 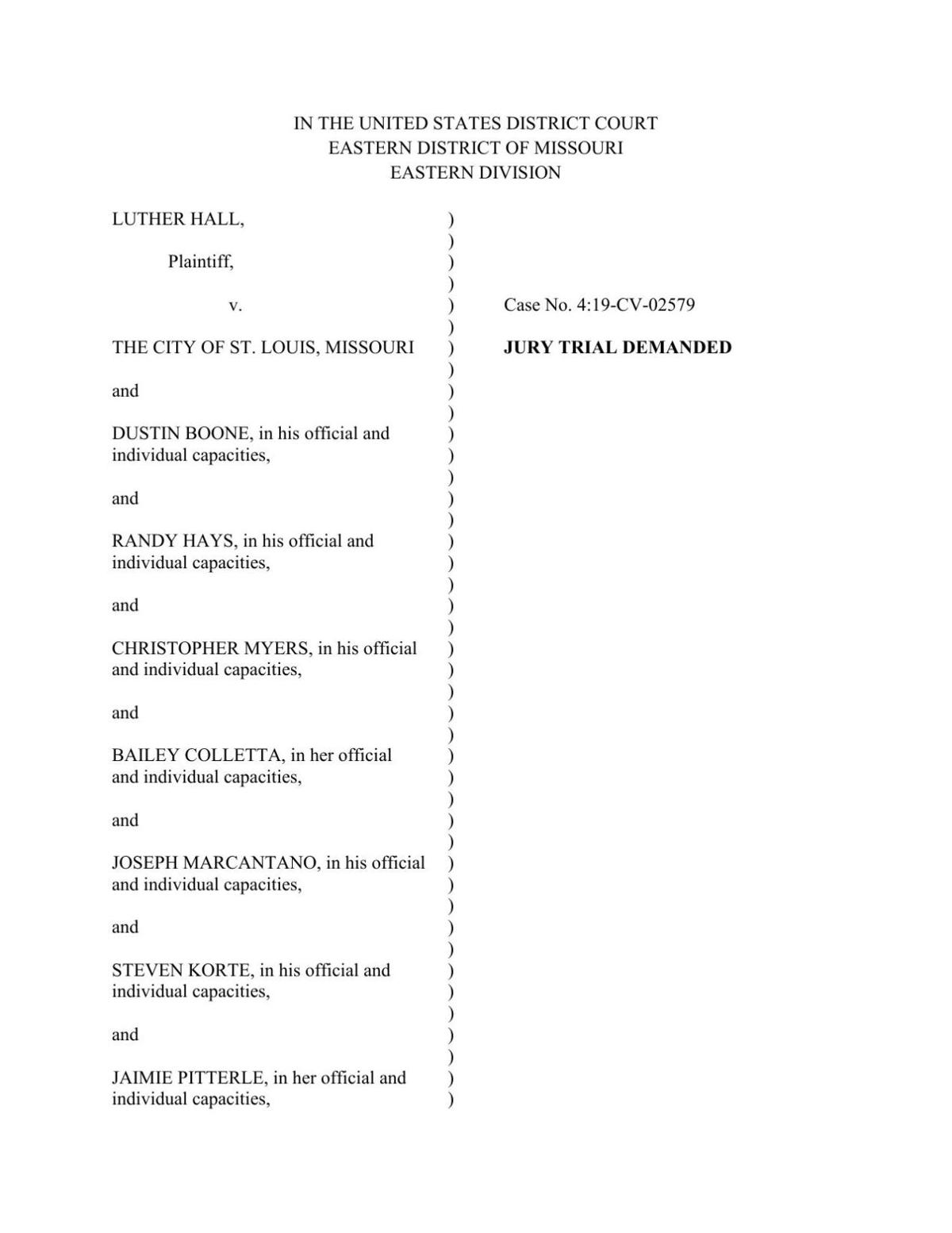 Assistant U.S. Attorney Jennifer Winfield told the judge about the plans to indict others during a recent hearing in the case against Boone and Myers, the Post-Dispatch reported. Both have pleaded not guilty and were scheduled to go to trial Dec. 2.

It should be noted that Hall’s lawsuit names two officers that haven’t yet been indicted, Joseph Marcantano and Steven Korte, as well as then-interim chief Lawrence O’Toole and other unnamed officers. Insiders believe the upcoming indictment will include Marcantano, whom O’Toole promoted in December 2017, and Korte. And we can’t forget that the Hall’s lawsuit names Mayor Lyda Krewson who allegedly told Hall, “Oh, they messed up your cute face,” after Krewson’s driver transported Hall to a triage center to have his injuries treated and then back to the police headquarters.

Hays’ plea is powerful validation for those who have been protesting police officers’ use of excessive force on the community. Heather Taylor, president of the Ethical Society of Police, said every officer and commander who knew about Hall’s beating should receive the maximum sentence for the crimes they committed and/or tried to cover up. O’Toole and other commanders allowed the behavior, and they have escaped consequences, she said.

“This is a small glimpse of what they did,” Taylor said. “There’s no telling how many protestors they beat and haven’t been charged for.”

Here are the facts that Hays agreed with and admitted to in his plea agreement, edited minimally:

Protests had been going on since September 15, 2017, when former St. Louis Metropolitan Police Department Officer Jason Stockley was acquitted of a murder charge in an officer-involved shooting. The police department and city officials had advance notice of the impending verdict, planned their protest response, and organized police officers into response teams. 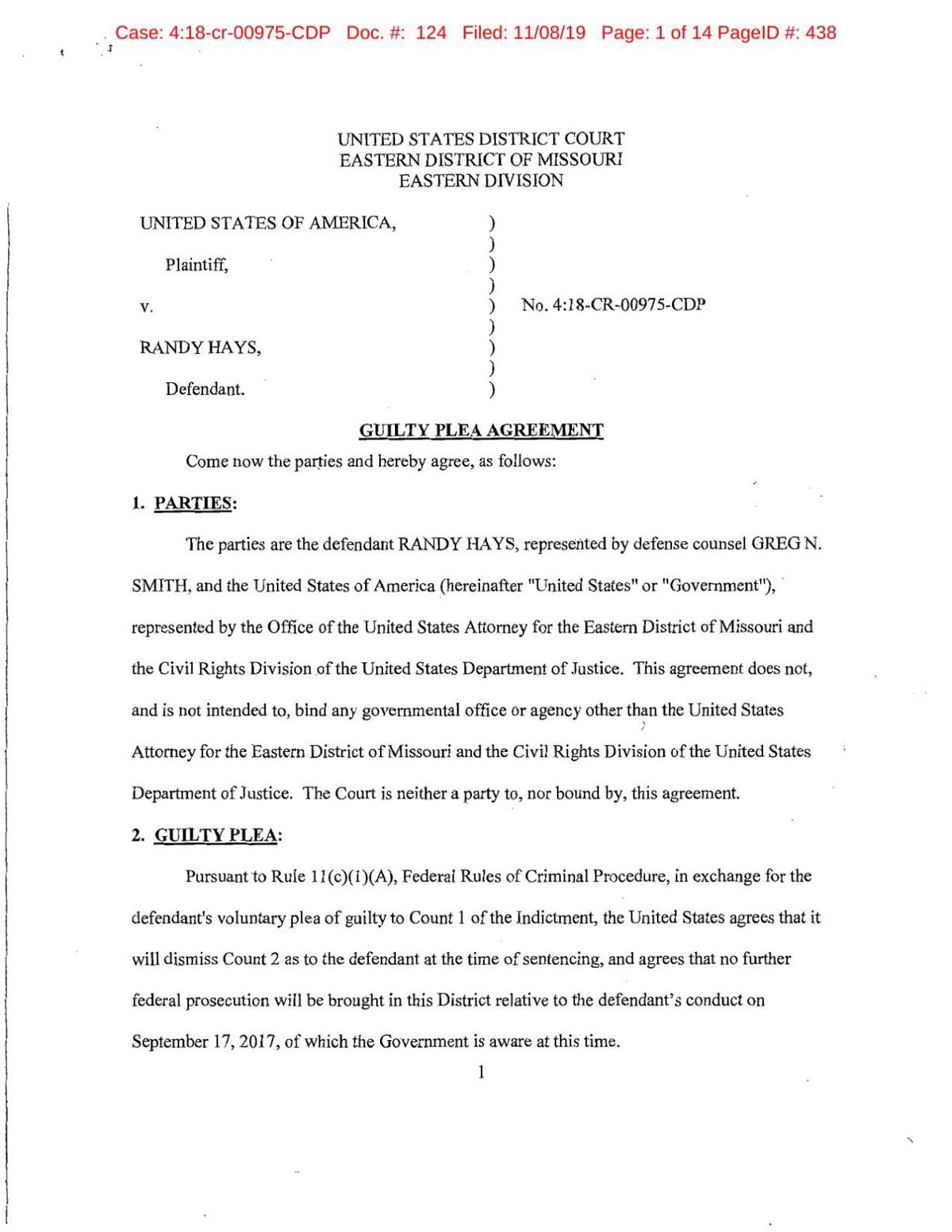 During the evening of September 17, 2017, two days after the protests began, Hall was working undercover and ended up around the St. Louis Public Library at the corner of 14th and Olive streets. At around the same time, Hays and other CDT officers were walking north on 14th Street toward Washington Avenue. The officers were walking in a line, in pairs of two, ultimately to get to a location where they would stand in formation, side-by-side, to engage in crowd control. While the team was walking on 14th Street, and as shown on pole camera video, there was very little protest activity at the intersection of 14th and Olive streets. Hays was situated close to the front of the line. Boone was next to him. Myers and another officer (“Officer A”) were walking in front of Hays and Boone.

Hall had been standing on the corner of 14th and Olive streets, between a portable generator and the curb. At no time did Hall appear to be committing a crime, and Hays did not witness anything that gave the officers probable cause to arrest Hall. Nonetheless, believing that Hall was a protester, the aforementioned four officers, as well as other officers, took Hall into custody, and in so doing, assaulted him, using physical force that was both unnecessary and unreasonable.

Hays saw “Officer A” kick Hall squarely in the face, without reason or provocation, which was inconsistent with when it is appropriate for an officer to use such physical force. When “Officer A” kicked Hall, the undercover cop was prone on the ground, compliant, not posing a physical threat, and not saying a word.

In addition, a cell phone recording captured Hays and “Officer A” giving orders to Hall to put his hands out. At that time, Hall was wedged in a small area between the portable generator and the curb. Several officers were pinning Hall down in that small area, such that Hall could not move. Boone had his knee on Hall’s shoulder and was continually pushing down Hall’s head, while telling Hall not to look at him — thus making it difficult for Hall to comply with the order to put his hands out.

Hays delivered three to five strikes to Hall’s body with his riot baton, and Hays forcefully shoved Hall to the ground. Throughout the encounter, Hall did not do anything to warrant arrest or the use of any physical force, and remained silent. Nonetheless, Hays, Boone, “Officer A” and other officers used unreasonable force against Hall, which resulted in bodily injury.

The following day, after roll call at the Electrician's Hall, a member of the SLMPD command staff requested that all officers involved with Hall’s arrest meet him outside. Hays, Boone and Myers, as well as “Officer B” and a few others, went outside. “Officer A” did not go outside. While meeting with the member of the command staff, the CDT officers learned that the arrestee was Hall. Myers admitted that he intentionally destroyed Hall's cell phone. Similarly, “Officer B” admitted intentionally destroying Hall’s camera.

The plea also documents the following text exchange between Hays and Boone the day after.

Boone: “Everyone seems to think that we r ok. Still don't like it hanging over me tho!”

Hays: “Yeah, me either, just told [another officer] the ass whooping can be explained. The camera thing can't and we weren't apart of that.”

Boone: “Yes, trust me, I am WAY more alright with what u and I did than what the others did! I don't like that we put our hands on another cop, but the situation was a little [expletive] too, wasn't JUST us.”

Hays: “Wasn't just us, I don't like the beating the hell outta a cop, but the department put him in that spot, he could’ve announced himself any time. And he wasn't complying. The camera thing is just ignorant, nothing we all haven't done and if it was a protester it wouldn't be a problem at all.”

(According to Hall’s lawsuit, Hall did not identify himself because he didn’t want to blow his cover to “other demonstrators.”)

(Note: Jaimie Pitterle has been removed from Luther Hall’s lawsuit.)