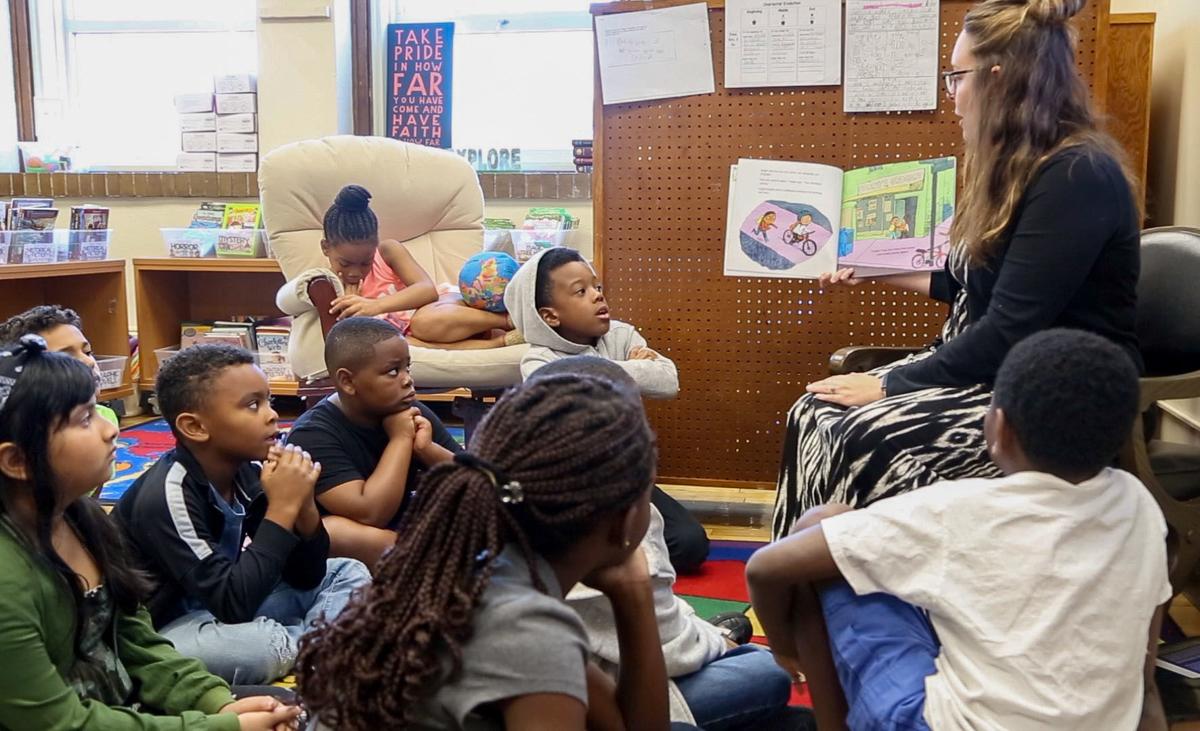 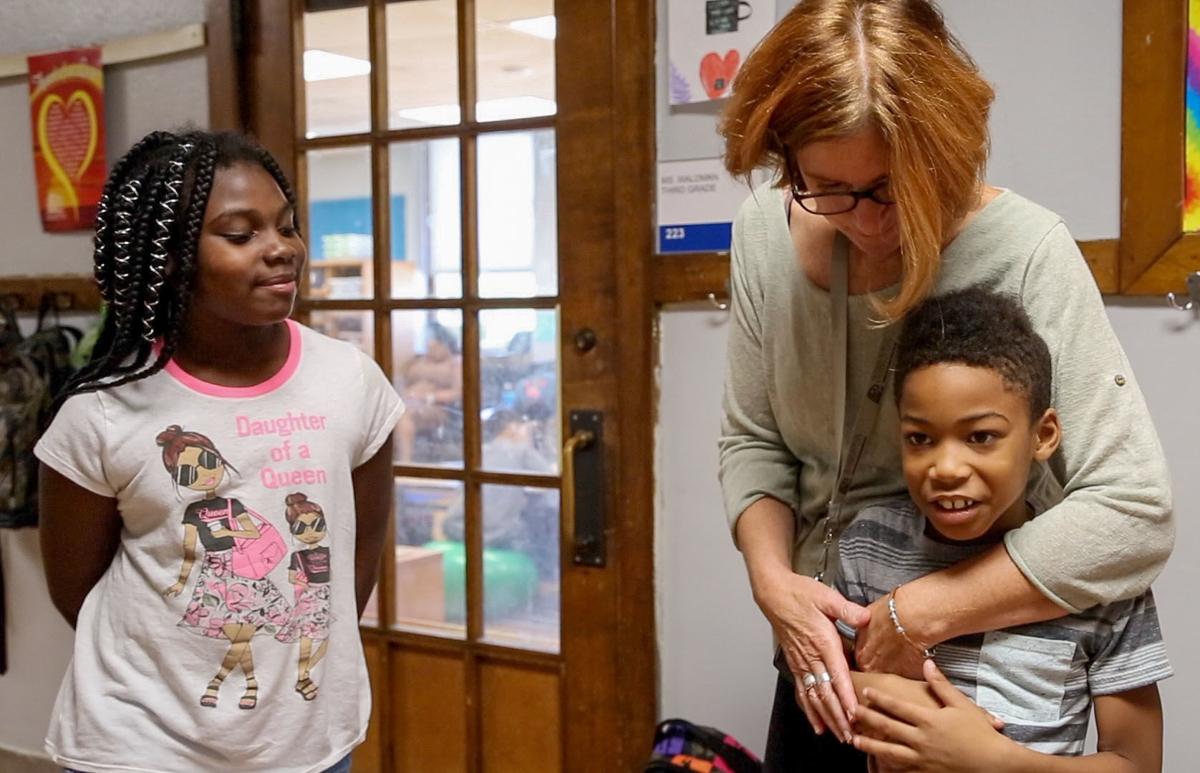 Flynn Park Elementary School in University City has been on a journey these past three years, said Principal Nicalee Wilson. And it’s one that’s best illustrated through a story.

“I think of a student we received as a kindergartener, who had screaming tantrums all the time,” Wilson said.

The student would tell her teachers that she couldn’t read because she wasn’t a reader. By second grade, she was using the calming area in the classroom, along with the calming practices she learned. And she experienced growth as a reader. Now the student can articulate her feelings and explain if she needs space.

“As she was able to better articulate her needs, she was better able to focus on her academic needs,” Wilson said. “For that particular student, we needed to deal with the social emotional needs that she showed up here with. She is on the path to growth, and I am fully confident that as she remains here with us, she is going to be a student that we continue to celebrate.”

Wilson could tell many more stories of students who have faced trauma in their lives and struggle to focus in the classroom. It’s why the University City School District decided to make a “human-centered” transformation three years ago — one that involves a lengthy list of initiatives and partners. At the heart of it all is the commitment to give everyone a voice.

Flynn Park has consistently made academic gains over the years, Wilson said, but what the school community — teachers, administrators and families alike — is really celebrating are the gains in their “social-emotional connections.”

“It’s the relationships we are building with our students,” Wilson said. “It’s the safety we are creating. It’s the positive learning environment we’re creating. That is almost immeasurable, what we’re seeing. The students have learned how to express their needs, and we are learning how to meet those needs.”

For their important work, Flynn Park Elementary will be named the 2019 Bayer School of Excellence on Saturday, September 21, at the St. Louis American Foundation’s Salute to Excellence in Education Gala, held at America’s Center.

“The honor represents the fantastic work of a dedicated and committed team at Flynn Park,” said Sharonica Hardin-Bartley, superintendent of University City Schools, “a team that puts both the head and the heart at the center of the student learning experience.”

After Hardin-Bartley became superintendent in 2016, she led the district in drafting a strategic plan that aims to “humanize, personalize and problematize” the learning experience for their students. When she served on the Ferguson Commission's Youth at the Center workgroup, Hardin-Bartley helped to write the commission’s recommendations for schools, specifically for addressing trauma. She is also a board member for Alive and Well Communities, a nonprofit that educates the region about trauma-informed practices.

Hardin-Bartley brought all that expertise to the table when collectively and collaboratively writing the district’s new plan.

So now when you have a conversation with educators at Flynn Park, it’s a whirlwind of acronyms and out-of-the-box sounding programs. There’s T.L.I. — Transformational Leadership Institute — which trains teachers on how to build an environment where a “growth mindset” reigns.

“We validate how they feel but we also re-teach, and that’s how we build the bridge,” said Rosalind Hollins-Lewis, a teacher instructional leader who coached the school in C.L.R. “With C.L.R. there is lots of time for movement to get up. Lots of times for students to celebrate each other, so it’s not just coming from their teacher. It helps build a sense of community.”

There’s also mindfulness training, where the school’s counselor Jona Ross comes in and leads the classes in 10-minute meditations. She also uses these practices with students one on one.

“It gives them time to separate the story in their head from the sensations in their body,” Ross said. “I ask them to put the story on pause and breathe and just pay attention to what they are feeling.”

Once they can get rid of the sensation, most of the time they are able to see things from a wider perspective, move past the issue and go back to class, Ross said.

There are also restorative circles.

“If a child feels like, ‘Something has happened to me,’ and it needs to be addressed in our classroom, then they have the ability to call that restorative circle,” Hollins-Lewis said. “The class meets and they problematize through that, ‘How can we solve this real-world problem?’”

Restorative circles have also helped to keep their suspensions down, Hollins-Lewis said, though the district has not completely stopped suspending students.

While many of these initiatives were district-wide, Wilson said that Flynn Park “sprinted” in adapting them at the school. Melissa Moussalli, a teacher instructional leader at Flynn Park, said that after the first year, the change was obvious — specifically in the teachers’ responses.

“We think of ourselves as the lead learners in this work,” Moussalli said. “We are learning alongside everyone else.”

Accepting that vulnerability in being learners, she said, is what helped them do what really needed to be done — let go.

“We relinquished what we thought was our role of running staff meetings,” Moussalli said. “We realized that wasn’t the way to shift culture, and we allowed more teacher voice in what this is going to look like in our building. Because ultimately they are the ones who fulfill this mission. That’s when the shifting started happening.”

Not everyone jumped in with both feet. Amanda Jones, an advanced placement teacher, remembers hearing the word “mindfulness” and cringing.

It was a little too “kumbaya” for her taste, she said. But now three years later, she uses mindfulness and breathing techniques in her own personal life. And she’s seen how it’s helped her students to be more open to making mistakes and learning more freely, just as it has for her.

Laughing, Jones said about the mindfulness addition, “I’m not ashamed to admit that I was wrong.”

The 2019 Salute to Excellence in Education Gala will be held at 6 p.m. Saturday, September 21, 2019 at the America's Center Ballroom, following a reception at 5 p.m. Tickets are on sale now. Individual tickets are $100 each/$1,000 table and VIP/Corporate tickets are $1,500 table. For more information or to purchase tickets, visit www.stlamerican.com and click on Salute to Excellence, or call 314-533-8000.