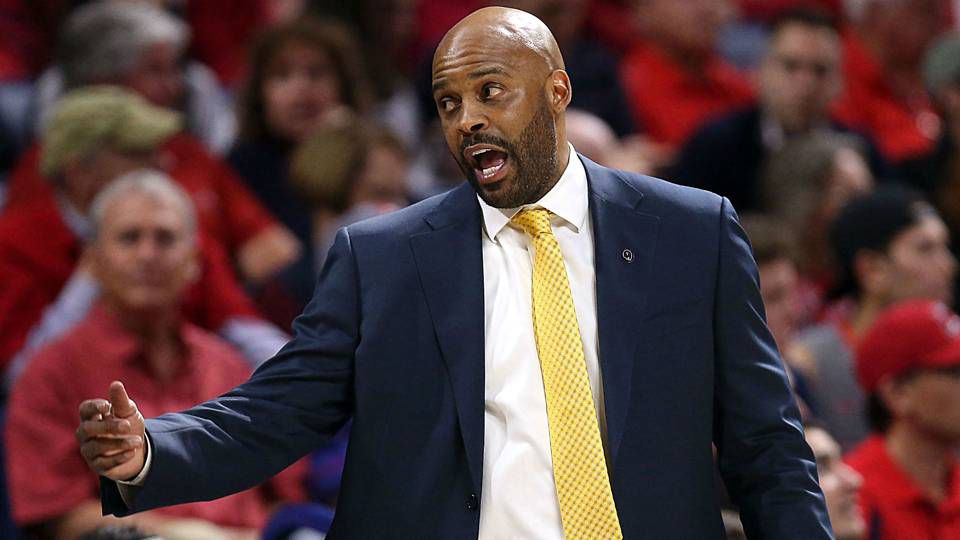 East St. Louis’ own Cuonzo Martin was introduced as the head basketball coach at the University of Missouri last week with plenty of fanfare and hype.

Martin fills the shoes vacated by former coach Kim Anderson with impressive credentials. He had a 61-41 record at Missouri State with a Missouri Valley Conference title. Martin was 63-41 and a Sweet 16 appearance while at Tennessee. And he recorded a 61-41 mark under some of the toughest academic standards in the country while at the University of California – Berkley.

The former Purdue University and East St. Louis Lincoln standout has hit the ground running, by getting a verbal commitment from the National Player of the year Michael Porter Jr. He is also  recruiting McDonalds All-American Kevin Knox Jr.,  who is the son of former Florida State Seminole wide receiver Kevin Knox. Knox is a 6’8 combo forward who has unlimited potential and would fit in real nice in a Cuonzo Martin-run system. Mizzou is in the running, as Florida State, Kentucky, Duke, and North Carolina are in heavy pursuit also.

Another player that Martin and his staff is heavily recruiting is Edwardsville High guard Mark Smith, who was recently named Illinois Mr. Basketball and Illinois Gatorade Player of the Year. The smooth 6’5 combo guard is considered one of the toughest guards in the country who hasn’t given a commitment yet. Martin had offered the former University of Missouri baseball commit a scholarship at his previous stop at Cal, so Smith and his family are quite familiar with coach.

Landing Smith would shut-up some other coaches from around the country who are attempting to gain a recruiting advantage by telling local recruits that Martin didn’t recruit St. Louis players at his previous stops. It’s something that’s totally not true.

At Tennessee he had a roster without much leverage based on what he inherited. And as far as his tenure at California, the academic standards were such that not many local players who would fit into his program would qualify academically.

Martin met with Mark Smith and his family on Tuesday night. The St. Louis American will be the first to know, according to the Smith family, when he makes his official announcement.

So the heat is on, so to speak, as Director of Athletics Jim Sterk aggressively hired Martin to restore the roar during basketball season in Columbia.

And make no mistake, the alumni and fans at Saint Louis University and the University of Illinois will feel the effect of Martin’s coaching, integrity and winning ways that are coming to Columbia. Martin and his staff will do things the right way at the University of Missouri.

What you saw last week during the Martin tour with the media wasn’t a sales pitch. What you saw and heard is what you are going to get from the new Missouri head coach. And for Missouri fans, alumni, and basketball fans who don’t know him like I do, just wait and see what takes place in the near future with Mizzou basketball.

But something real stinky happened right down the street regarding Travis Ford and his band in the SLU basketball program.

Former Riverview Gardens standout Zeke Moore was forced out and asked for his release of his scholarship from SLU without much fanfare from the local media.

But it didn’t go unnoticed from the East Side. Moore, who averaged 5.3 points and 20 minutes per game, was quite impressive during the 2016-17 Billiken season as a true freshman.

Moore’s ability off the bench helped spark numerous Billikens runs that turned into the few wins the Billikens had this season. But head coach Travis Ford never seemed to give Zeke Moore the opportunity to blossom and often pulled him out of games just when he was doing well.

Listen to Maurice Scott Jr. on the Charlie “Tuna” Edwards show at 9:30p.m. every Wednesday night on 590am ‘The Fan” KFNS.

You have no evidence that Zeke Moore was "forced out" at SLU. The kid's own twitter page was very complementary of Ford when he announced he was leaving https://twitter.com/Zeke_moore24/status/844324876513165313/photo/1. Sometimes players don't fit or want more playing time than they think they'll get and go to another school. Nothing wrong with that at all. Zeke is an excellent shooter and will make a good addition at another school.

I think Martin is an excellent hire for Mizzou and look forward to area college basketball being on the upswing. That being said extolling Martin's "integrity" doesn't sound right. He's essentially buying the #1 recruit for 2017 by paying his dad to be an assistant coach which seems pretty shady to me. He also ditched Cal after signing a contract extension in order to get a bigger payday from Mizzou. He's no different than any other coach looking to get ahead and make as much money as possible.

Thanks for your comment loyal Billiken Fan. However, I have MORE THAN ENOUGH EVIDENCE to back up anything I write sir. The difference from me and what your use to reading in this town is I'm not afraid to write THE TRUE and speak to power....As for coach Martin, I've known him since he was a kid in high school. He's not buying anything, check your facts regarding Porter's return before you come on here questioning his integrity! If you want to have a conversation, call the radio station tonight and I'll give you some facts. I NEVER write anything that I can't back up. In addition, most things that I write about I know the people personally! I've been in the media around here for 25-years, so you might not like what I say or write, but I can back it up and SOME.......

can you please list your evidence sir? I myself believe you have zero evidence. in fact none of this about zeke moore is true at all. zeke is a great kid who was NOT forced to leave but left at his own will because sometimes its just not the right fit. I also believe you be careful what you write because you may never know what happens to someone who writes false things and post them. again. FALSE. stop hating on the kid.

Thank you for reading Billiken Fan. However, I have more than enough evidence to back-up anything I write. If you want to have a conversation, call the radio show tonight and I'll give you some evidence that I couldn't print. As for as coach Martin is concerned, check your facts regarding Micheal Porter Jr. return to Columbia. And believe me, you are the first person I have ever heard question his integrity..Seems like he's making a impact already with the SLU Faithful.