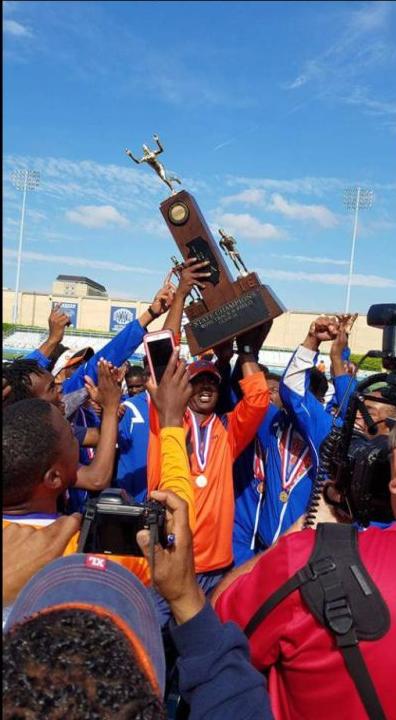 East St. Louis track coach Barry Malloyd came back to coach this past school year with a promise to his student athletes to bring a state title back home in to the “City of Champions.”

The Flyers didn’t disappoint him as they won the Illinois High School Association 4A State Championship. A former All-American from East St. Louis Lincoln, Malloyd retired in Charleston, Illinois after his team captured the team title.

It was the 11th State Championship for East St. Louis’ storied track and field program, and first since 2008.

On a warm and sunny May afternoon, the Flyers put on a performance that thrilled a large crowd at O’Brien Stadium on the campus of Eastern Illinois University.

The Flyers were impressive early in the day by winning the 4x100-meter relay with a sizzling time of 41.64 seconds. In addition, East St. Louis got outstanding performances from Deonte Anderson and Marlowe Mosley in the 400 meter dash, placing third and fourth, respectively. In addition, the Flyers’ 4x800-meter relay team placed ninth.

‘We put in a lot of work during the indoor season, and ran in some outstanding meets during the spring to get us ready,” Malloyd said. “Meets like the Holt Invitational, New Orleans, Kansas Relays, and of course the Southwestern Conference meet and the St. Clair County meets have some of the top teams and individuals right here in our own back yard in the state. The young men were on a mission when it was snow on the ground during conditioning, and they proved they were not going to be denied.”

The Flyers were a bit worried heading into the last couple of events with Southwestern Conference rival Edwardsville in striking distance. But with the 4x400-meter relay team lining up for the final event of the day, coach Malloyd had confidence his boys would put on a show in front of the overflow crowd.

The sensational team of Marlowe Mosley, Kevin Johnson, Roosevelt Davis and Sanchez Rhodes gave the fans their money’s worth with an outstanding performance and a winning time of 3 minutes 15.35 seconds to give the Flyers the team title for 2016.

“I owe it all to the alumni, the community, the staff, and the coaches who were thirsty for a winner at East St. Louis. The administration made sure those young men didn’t need anything so we could compete at a high level. But more importantly, it was the hard work and dedication of those young men. They deserve to be champions and I love each and every one of them,” said Malloyd.

“It was a great way to hang up the whistle and the stop-watch and call it a career.”

Defending state champion Edwardsville finished second with 42 points. A.J. Epenesa, a three-sport star and one of the top football recruits in the country, set an IHSA record in the discus with a toss of 205 11inches. Epenesa, the No. 1 football recruit in the state, has given a verbal commitment to Iowa.

Sessions is the son of a former East St. Louis Flyer football and track & field standout, the late Rodney Sessions. Sessions came back to win the 300-meter intermediate hurdles.