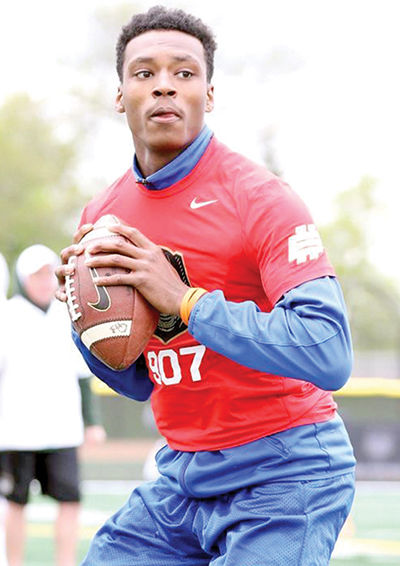 The inaugural Border War Gateway Scholarship Football Classic should provide plenty of bragging rights to talk about after it’s over. The three-game event will be held at Clyde C. Jordan Stadium in East St. Louis on Saturday, September 3.

It will open with Cahokia against Public High League team Sumner at 1 p.m. Cahokia is coming off an exciting 25-24 victory over Mississippi Valley Conference power Highland. It was the coming out party for head coach John Clay and the Cahokia fans in front of a huge crowd at O’Brien Stadium in Cahokia last Friday night.

Game No. 2 will be Belleville Althoff vs. Jefferson City Helias. Althoff opened the season with an impressive victory over Collinsville. The Crusaders defeated Helias 54-38 last season. Kickoff is at 4 p.m.

But the marque match-up that everyone’s talking about will be CBC vs. East St. Louis in a battle of traditional powerhouse programs, which will begin at 7 p.m.

Playing in their first game since September 26, 2015 due to a teachers strike last seasons, the Flyers embarrassed Chicago power Providence Catholic 34-3 to open the season. East St. Louis dominated from start to finish against the Celtics, coasting to a 28-0 halftime lead.

Meanwhile,  CBC put a whipping on Christian Brothers (Memphis) 52-17 to move to 2-0. CBC has outscored its first two opponents 100-17. According to the fans who bleed purple and gold, the Cadets are looking forward to the match-up against the Flyers.

The Flyers seem unfazed, as they are playing with swagger and confidence these days. In the victory over Providence, East Side’s dynamic duo of Mizzou recruit Reyondous Estes and All-American candidate Jeff Thomas quickly silenced the home crowd on their opening drive with a 45-yard touchdown connection.

Estes finished completed 12 of 25 passes for 263 yards with a pair of touchdowns as threw the ball with flair and confidence. Thomas had five-receptions for 171 yards and two touchdowns and proved to everyone in attendance why he is considered one of the elite wide receivers in the country despite tweaking an ankle in the first quarter.

The Flyers defense dominated as well.  James “Bone Crusher” Knight, LaMontre’ “State Street” Harvey, Terrenz Lagrone, and the rest of the defensive unit limited the Celtics to three first downs in the first half, with two of them coming via penalty. They held highly touted Providence Catholic running-back Richie Warfield to 17 yards on 12 carries.

While East St. Louis is playing and talking with swagger, CBC will bring plenty of athletes to the House of Pain for the flyers to deal with on Saturday night. The Cadets, who are the six-time Metro Catholic Conference champions, sport a 29-1 record to date in their last 30 games. CBC is the Cadillac program in the state of Missouri in class 6.

The Cadets feature sophomore quarterback Brett Gabbert, who is the younger brother of San Francisco 49ers quarterback Blaine Gabbert. He is 22-33 for 372 yards and three touchdowns on the young season. The Cadets quarterback has an arsenal of receivers that East St. Louis might not see all season long.

Leading the way is the talented duo of juniors Kamryn Babb (6’2 190) and Cameron Brown (6’ 175). Babb has offers from Ohio St., Michigan St. Wisconsin, Nebraska among others.  Brown has offers from Iowa, Iowa St. Mizzou, Illinois. In addition, Gabbert has some other receivers who will test the Flyers’ secondary in Damon Jones (6’3 185) and Josh Wallace (6’5 205).

Running back Justin Williams has been Coach Scott Pingel work horse in the running game early on this season rushing for 308 yards on 22-carries.

The previous City of Champions Classic hosted by former East St. Louis flyer players and University of Illinois stars Dana Howard and Julyon Brown brought the likes of Illinois prep powers Lombard Montini, Chicago St. Rita, and Missouri prep power Kansas City Rockhurst, among others the past few years are wondering why they weren’t invited to host this year’s event.

When asked the same question, former star East Side athlete Juan Brown, a member of the first  State championship team in 1979 and the brother of Julyon Brown, stated, “I know why. If people didn’t have their hands out wanting total control of the entire event, the City of Champions Classic would still be in existence this weekend.”

Juan Brown went even a step further. “Even more money would have been distributed to the athletic program,” Brown said, “had people in the East St. Louis community not hand their hands out.”

In a recent interview, this year’s classic organizers stated they will have a new twist in the football classic that will feature a college fair at East St. Louis Senior High the morning of the game.