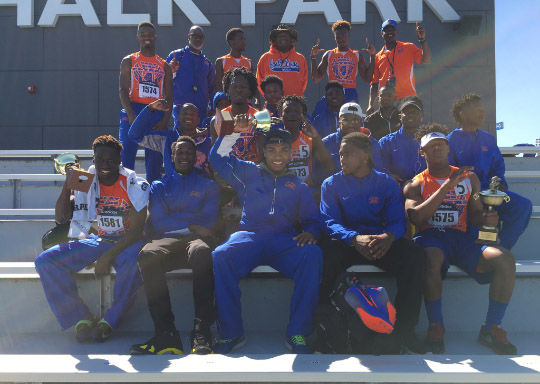 The boys’ athletic teams at East St. Louis Senior High have been somewhat of a disappointment in 2015-16.

The football team’s season was cut short during the teachers strike. The basketball team suffered an unexpected loss of superstar Jerimiah Tillman, who transferred to an Indiana prep school.  And first-year head coach Phillip Gilbert losing in the opening round to conference rival Belleville East at home in the Regionals wasn’t what most expected either.

As the flowers are blooming in late April and early May in East St. Louis, head track and field coach Barry Malloyd has his thin-clads returning to glory.

The former All-American at East St. Louis Lincoln has his team poised to make a run for the Illinois High School Association championship May 26-28 on the campus of Eastern Illinois University.

The Flyers have been quite impressive since the indoor season started. And once the outdoor season was in high gear, East St. Louis has been downright nasty.

Both are currently the fastest times in the state in both events.

After impressive displays on the national stage at the Sugar Bowl Classic and the Kansas Relays, the Flyers went to work this past Saturday competing in the Rockford East Relays.

With weather conditions not good in Rockford last weekend, East St. Louis continued its mission toward a state title.

Other standouts on last Saturday’s cold, rainy, windy afternoon were the brother duo of Delan and Deonte Anderson, huge parts of the winning 4x100m relay, sprint medley and the 4x400m relay teams.

“This team keeps improving week after week,” said Malloyd. ‘We don’t feel we have put together our best effort yet.”

The Flyers will compete this Saturday in the Collinsville Invitational, and then tune up in the annual Southwestern Conference meet on May 11, which is prior to the sectional qualifying meet on May 20. Next up will be the state championships at O’Brien Stadium on the campus of Eastern Illinois University.

The boys track team has put some pride and hope back into the athletic department at East St. Louis that is a pillar of the community we call the City of Champions.

And it couldn’t be a more deserving coach in the area than Malloyd to put his team on his shoulders and guide them to success with dignity and with the respect that has been a staple of East St. Louis athletics for decades.

Continued success coach Malloyd to you and your boys!