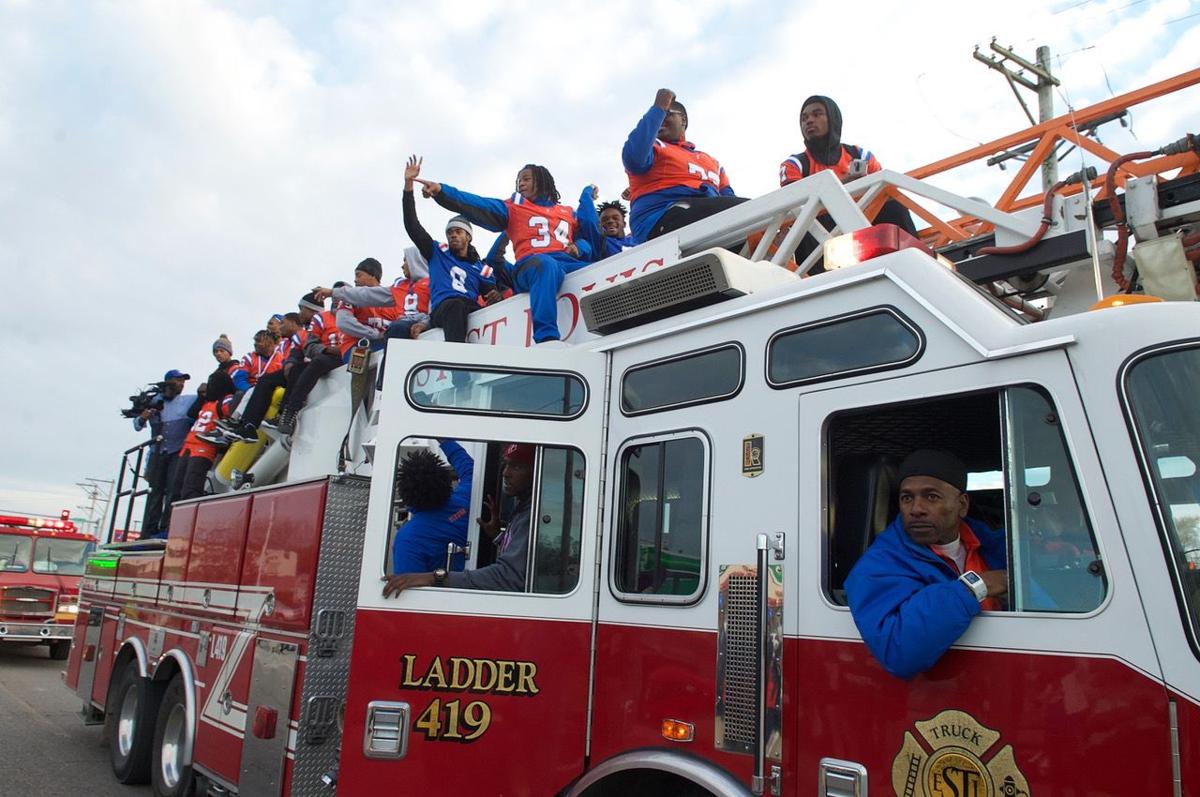 The East St. Louis Flyers’ season came to an end Saturday, November 26 in victorious fashion. The Flyers posted a 26-13 victory over Plainfield North in the Illinois Class 7A state championship game at Memorial Stadium in Champaign, Illinois.

It was the eighth state championship in the rich history of East St. Louis football. In addition, the state’s most successful program finished ranked #20 in the USA Today Poll.

An estimated 1,000 fans made the 2 hour 45-minute trip to Champaign, Illinois, and the Flyers football team didn’t disappoint them as the put up another dominating performance.

East St. Louis (14-0) got its “All Gas, No Brakes” slogan going in the first quarter with four big plays on the night that sealed the deal for their eighth state title.

“We had our chances,” said Plainfield North head coach Tim Kane, who is 0-6 against East St. Louis. Kane was 0-5 while at Collinsville High school. “We didn’t take advantage of our opportunities, and we gave up the big play.”

With 2:55 remaining in the opening quarter, Flyers’ quarterback Reyoundus Estes capped an 11-play, 56-yard drive with a 7-yard strike to James Knight to put East St. Louis up 6-0.

With 2:23 remaining in the third quarter, Plainfield North put its best drive together. From the Plainfield 29-yard line, Plainfield went 53 yards on 8 plays to the East St. Louis 26 yard line. But it was the ninth play of the drive that brought the Flyers’ fans to their feet for the rest of the night, celebrating when linebacker Eric Owens stepped in front of a pass from Plainfield North quarterback Brady Miller to race 82 yards down the sideline to extend the Flyers’ lead to 26-0. That was the backbreaker.

Plainfield North added two touchdowns in the fourth quarter, but it was too little, too late as Flyers coach Darren Sunkett got his second state title at East St. Louis.

“These kids did a great job. They are the ones who worked in the weight room during the summer and bought into what the coaching staff was saying,” Sunkett said during an emotional press conference after the game.

“The opportunity to even get to a state championship game is something a lot of people never get to experience. To be able to win with this group of kids means a lot. I’m so proud of this football team.”

And the people of East St. Louis are as well. Over 300 people were present for the champs at 1:30 a.m. when the team’s charter bus arrived at the high school. In addition, the pep rally on Monday and the parade on Tuesday put a bow on the Flyers’ perfect season.

This team went through a lot during the season, especially after last season’s well-documented teachers’ strike. Make no mistake, nothing brings the East St. Louis community together like our athletic teams, especially the football team. The all-time winningest program in Illinois history and one of the top programs in the country has made the City of Champions East St. Louis proud once again.

And I’m a proud alumnus as well. No more Darren “Quarterfinals” Sunkett references in my column anymore. Darren Sunkett for “Coach of the Year.”

In Loving Memory of Lloyd Logan