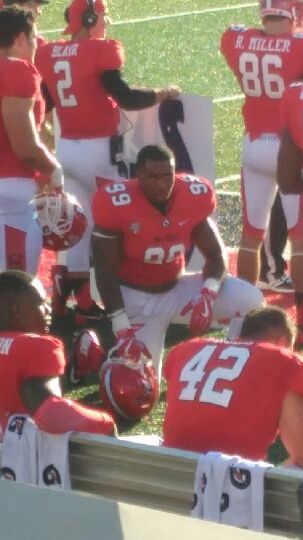 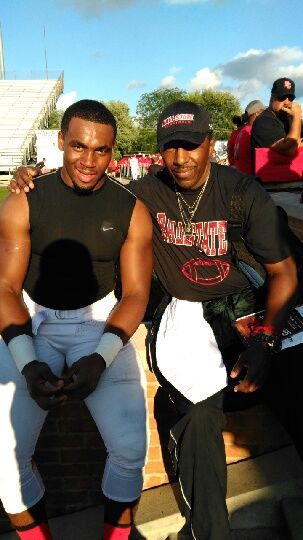 Kenny Knight Jr., who is playing with 4-4 Ball State, with Uncle Eric Ingram

Kenny Knight Jr., who is playing with 4-4 Ball State, with Uncle Eric Ingram

The parents of Kenny Knight Jr. and James Knight could not be more proud of their sons becoming top student-athletes.

Kenny Knight Jr. is a former East St. Louis standout who is currently a redshirt freshman at Ball State University. James Knight is currently a senior for the Flyers, who are the top-ranked Class 7A team in the state of Illinois.

Kenny Knight Jr. was on the dais with All-American Terry Beckner Jr. two years ago when they both signed their National letters-of-intent on ESPN. Although Beckner was the featured attraction of the day when he signed with Missouri, Knight went to Ball State with his 3.7 grade point average.

Since stepping on the Ball State campus, Knight has not let up in the classroom. He is currently on the Dean’s List with a 3.5 GPA while majoring in economics.

“It was a huge difference academically coming to Muncie from East Side,” Knight said. “But I have been prepared for some time now from my parents. Not getting your schoolwork wasn’t an option in our household. You either got your schoolwork or you didn’t play. It was as simple as that.”

James Knight is currently the team captain for the 9-0 Flyers, who will host New Lenox Lincoln-Way West in the opening round of the Class 7A playoffs at Jordan Stadium in East St. Louis. Kickoff is set for Saturday at 2 p.m.

The 5’11” 200-pound Knight is one of the leading tacklers in the Metro East area with 98 stops. He was recently named to the Illinois All-State Team.

In East Side’s victory over O’Fallon last week, Knight recorded a game-high 17 tackles. In their victory over Edwardsville in Week 6, it was Knight who sealed the Flyers’ victory with an impressive interception late in the fourth quarter. The Flyers won 20-10 to end Edwardsville’s 30-game Southwestern Conference winning streak.

Kenny and James’ parents, Kenny Sr. and Rachelle Knight, rarely miss their sons’ games. If they can’t make it to Muncie for a Ball State game, there’s Uncle Eric Ingram always there to pick up the slack. Eric was a former All-State kicker at East St. Louis Assumption in 1981.

“Having a solid family support system has been very important for the boys,” Ingram said. “They had grandparents who supported them; aunts, uncles and educators in their family tree. They all have encouraged them since they were little boys.”

The boys’ grandparents were very successful in the game of life as well. Their grandmother, Jackie Ingram, worked for the U.S. government for more than 35 years. Their grandfather, Luther Ingram, was one of the great singers for Stax Records in Memphis.

Both Rachelle and Kenny Sr. are both proud of the way their sons have matured.

“We have been watching them grow and become young men since they were playing little league football for the Centreville Tigers,” Rachelle said.

“I remember you would have them and their teammates play at halftime of the Rams’ game when they barely knew how to put their pads on,” said Kenny Knight Sr. “My wife and I couldn’t be more proud of both of them in the way they have excelled academically and on the football field.”

Young Kenny Jr. said he is having a blast at Ball State, which is currently 4-4. Meanwhile, James Knight has plans of helping lead the Flyers to a state championship in late November.