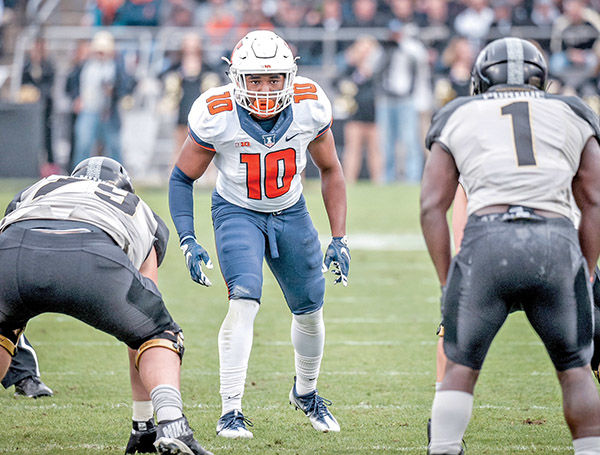 Former East St. Louis standout James Knight heads into his sophomore year at the University of Illinois as one of the top young linebackers in the Big Ten Conference.

During the first two weeks of August, I have been taking a look at some of the top players from the metro east who that have been excelling at the collegiate level around the country.

From The East Side

Here are three more players from the “618” area code who will have major impacts with their respective teams this season.

The 5’10” 215-pound linebacker from East St. Louis got his first start last season as a true freshman against Big Ten power Wisconsin. In addition, Knight played in 12 games with a breakout performance against Big Ten champion Ohio State.

Knight is also a B+ student in the classroom and he has the desire and determination to be one of the top linebackers in the conference during the 2018 season.

“I learned an awful lot about the quickness and strength at this level last season,” Knight said. “I feel as though I had a great spring camp and I’m ready to be a part of this winning process that’s about to happen here under Coach Lovie Smith here at Illinois.”

The 6’5,” 340-pound lineman started 13 games for the Tigers’ very potent offensive attack. He quickly emerged as one of the top offensive linemen in the Southeastern Conference.

“Tre’Vour, if he stays healthy has an opportunity to be one of the best linemen to play at Missouri,” said former Mizzou standout lineman Howard Richards, who played for the Dallas Cowboys.

Wallace-Simms earned the prestigious Iron Man Award last season by the Tigers’ coaching staff, playing the most snaps and never leaving the field for Mizzou’s offense.

Tre’Vour is an excellent student and he has the work ethic needed on and off the field to reach his potential. In addition, he has excellent genes as his mother is Toni Wallace, a former star athlete in basketball and track at East St. Louis Lincoln in the early 1980s.

Look out this season for the Missouri Tigers’ Tre’Vour Wallace-Simms. The coaches of the SEC are already taking notice of this potential superstar.

His parents grew up in the tough south end of East St. Louis. His father, Charles Coldon was a standout athlete at East Side as well. Young C.J. chose Belleville Althoff as his high school choice and he didn’t miss a beat as a standout athlete in football and basketball.

Coldon was one of the most heralded Crusaders ever. Now, a redshirt freshman at Wyoming, Coldon looks to make an impact in the Cowboys’ secondary this season as he earned a starting position.

Coldon was part of one of the most successful runs in Belleville Althoff athletics during his career. His high school teammate was Saint Louis U. guard Jordan Goodwin. They played together on a state-championship team in basketball and a football team that advanced to the state championship game.

At 6’1,” Coldon has already been tabbed by National Football League scouts as a top young defensive back because of his athletic ability, where he might not have to play four years of college football. Stay tuned.

Scott’s Notes: A group of the Washington Park, Illinoid action team that consists of citizens and former East St. Louis athletes cleaned a huge part of the city last Saturday. Led by precinct No. 5 committeeman Ferris Williams, the group of former Flyer athletes refurbished an area that many of the elderly had complained about recently. Hats off to the action team, but more importantly, our youth who provided manpower when often they are criticized for doing bad things in the Washington Park area.