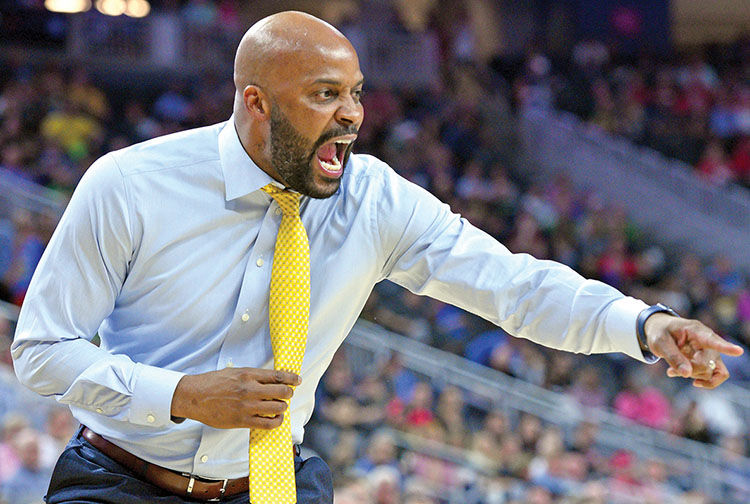 For the first time, Counzo Martin brings his Missouri Tigers to St. Louis, right across the mighty Mississippi River from East St. Louis, Illinois where he once grew up.

East St Louis will be well-represented Saturday night when the Bragging Rights college basketball game between Missouri and Illinois game returns to the Scott Trade Center.

For the first time, Counzo Martin brings his Missouri Tigers to St. Louis, right across the mighty Mississippi River from East St. Louis, Illinois where he once grew up. The former Lincoln High School and Purdue star will have plenty of people from the “618” rooting for a win over Illinois.

In addition, there will be plenty of people from East St Louis too root not only for Martin, but for Director of Player Development coach Marco Harris, a former standout in his own right at Lincoln, and collegiately at Southwestern Oklahoma State University.

However, the biggest name that people will be rooting for might be 6'10 forward Jeremiah Tilmon, the Mizzou freshman. The 2016 graduate from East St Louis had originally signed with the University of Illinois during his senior year.

However, after former Illinois coach John Groce was fired, Illinois named Brad Underwood as their new head coach and Illini nation seemed to feel lost and left out with Tilmon.

Underwood and Jamal "The Elf" Walker, who he retained from Groce’s staff, paid a visit to East Boogie to visit Jeremiah Tilmon and his family to seal the deal and keep Tilmon in Champaign. However, Tilmon opened up his recruitment again and landed in Columbia as a Tiger to the dismay to many within Illini nation.

Illinois fans ripped into Tilmon via social media as though he had committed a crime.

However, that didn't keep Tilmon from doing what he felt was best for him and he ended up signing with Counzo Martin and the Tigers anyway. Many with a clear vision as to what Martin and his staff had to offer Tilmon from a life skills standpoint knew that the Tilmon decision was a no brainer.

Jeremiah is flourishing for the Tigers, averaging 9.8 points and a respectable five-rebounds per game that has many in the national media speaking of Tilmon as one of college basketball’s top true freshman.

"I've been looking forward to coming back home playing right across the river from East St Louis as a college player representing the Missouri Tigers," said Tilmon. "It's one of many on the schedule that we play this year, it just happens to be Illinois up next."

As for coach Martin, he has brought a team across the river from East St Louis before as the head coach at Missouri State.

So Saturday night won't be a audition for him in front of hometown family and friends. But it will be a important game to say the least for a number of reasons.

I'm sure Illinois fans will let Tilmon know how disenfranchised they are about him not staying in Champaign every time he touches the ball or his name is called. But make no mistake, Tilmon will have plenty of people in his corner including his teammates at Mizzou.

Illinois fans locally will have a lot to cheer about as well. Former Mr. Basketball and Edwardsville High School standout Mark Smith returns home as a member of the Fighting Illini. Smith will have plenty of people rooting for him as well as Smith is one of the many classy young men in America representing the metro-east in collegiate sports.

Give Jamal "The Elf" Walker credit for getting Smith to commit with the Illini.

Northwestern, Kansas State, Michigan State among others were all knocking on Smith’s door and calling at a frantic pace close to National Signing Day last year.

But Jamal "The Elf" Walker burned some bridges with some people in East Boogie.

And it's going to difficult for him to return to recruit there in my opinion in the future.