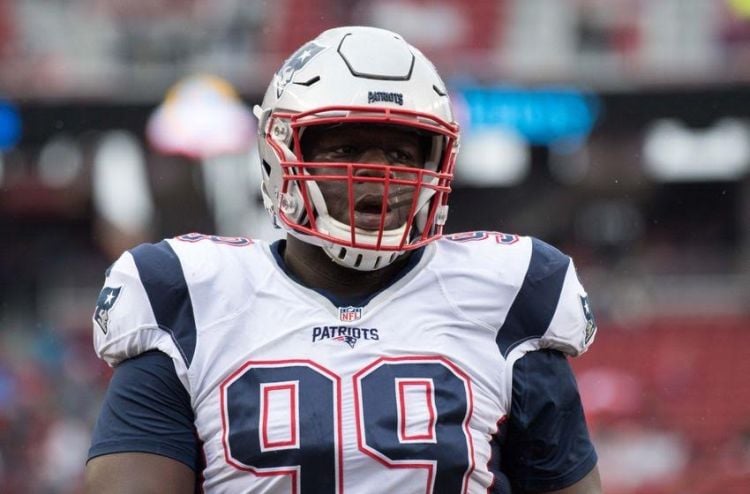 His work in the classroom and on the field earned him a scholarship at the University of Nebraska, where he graduated with a degree in Journalism. In addition, Valentine was named to the Scholar – Athlete Honor Roll in the spring of 2013.

Due in part to the success of Valentine at Edwardsville High, Valentine has formed a relationship back home as Madison High School who now offers football as a Co-op program with Metro-East Lutheran High School in Edwardsville, Illinois.

The third-round pick and 96th overall selections in last spring’s National Football League draft has been a pleasant surprise for the AFC champion New England Patriots.

During the regular season, the 6’3” 320-pound Valentine had 19 tackles and one sack. That came in his NFL debut in Week No. 1 against the Arizona Cardinals and Carson Palmer.

“Vincent has worked hard and has earned the trust and respect of his teammates,” said Belichick.

Vincent seems to think he has earned the respect of his coaching staff and teammates as well.

“I felt like I was playing pretty well early on, and I got hurt. So I had to bounce back and get use to the speed of the game and get my technique back,” said Valentine in a recent interview in the Telegram.com.

“It’s been a up and down year, but overall I’ve stayed level headed and stayed resilient and tried to work through everything that I’ve had to do.”

Vincent Valentine’s character seems to be a strong point with the mammoth defensive rookie lineman as well. While at Nebraska, he participated in Uplifting Athletes, making hospital visits with Cornhusker teammates.

Edwardsville head football coach Matt Martin and his coaching staff, his former Tiger teammates, former Superintendent of Schools Dr. Ed Hightower, the faculty and staff at Edwardsville High School will certainly be rooting for the big lineman to win a Super Bowl.

But family and friends back home in Madison, Venice, Eagle Park, Newport and Brooklyn Illinois will be waiting for the big fellow to return back to his roots win or lose for another parade through Madison like the one that was held when he was drafted last year.

However, this time he hopes to be experiencing a feat like no other from this area but one person that wore a New England Patriots uniform from the 618 area code, having just won a Super Bowl Championship.

Madison, Illinois and “The Bottom” will be waiting for you, Big Fellow!

Also, at Cahokia on Friday night: Belleville Althoff will travel to play the Cahokia Comanches with the winner taking control of the South Seven Conference.

Althoff will rely on C.J. Coldon, Edwyn Brown, and Marvin Bateman. While the Comanches will look to Thomas ‘Taco’ Bell, Richard Robinson, and Damond Harrison to beat the Crusaders. Tip-Off for both games is scheduled for 7:45 p.m.