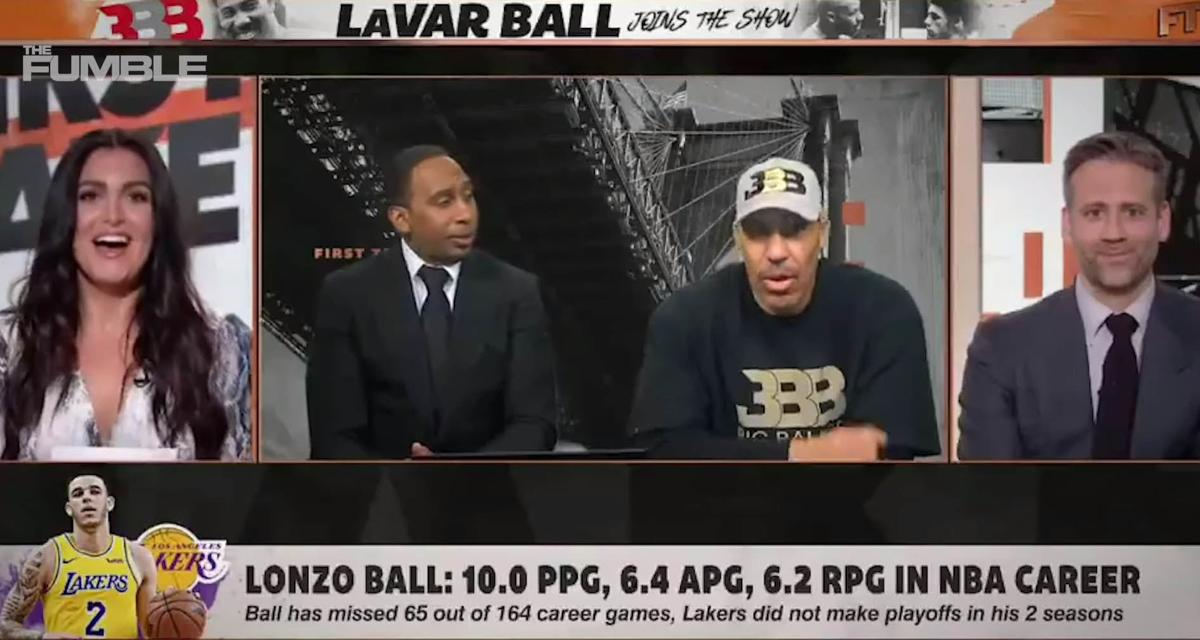 ESPN said it will no longer feature LaVar Ball on any of its platforms after he was accused of making inappropriate comments to ‘First Take’ co-host Molly Qerim. Ball has denied there was anything sexual in nature about the comments. 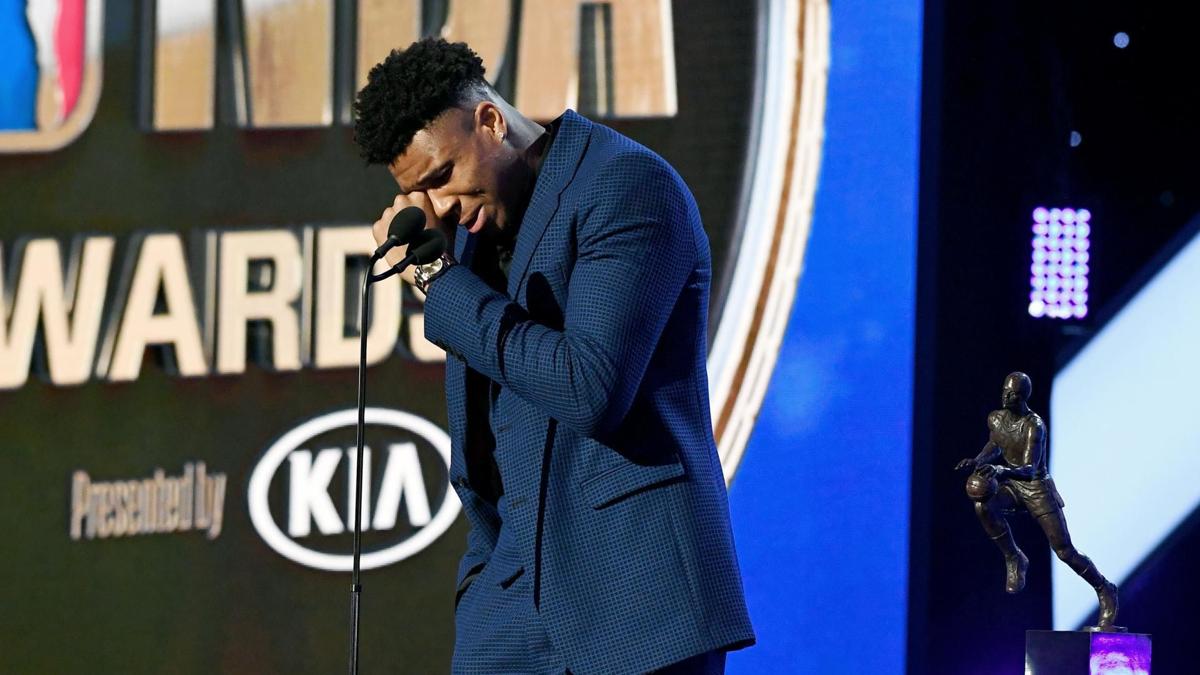 Giannis Antetokounmpo won the 2019 NBA MVP Award. The Greek Freak gave a tearful and heartfelt speech at the awards ceremony.

ESPN said it will no longer feature LaVar Ball on any of its platforms after he was accused of making inappropriate comments to ‘First Take’ co-host Molly Qerim. Ball has denied there was anything sexual in nature about the comments.

Giannis Antetokounmpo won the 2019 NBA MVP Award. The Greek Freak gave a tearful and heartfelt speech at the awards ceremony.

LaVar Ball is no stranger to making waves in the media. The most well-known NBA dad shot onto the scene by saying outlandish things in front of every camera and microphone in his vicinity. No matter the time or day, Ball always has something slick to say.

To some, the father of New Orleans Pelicans point guard Lonzo Ball is an annoying loudmouth who will say anything to stay in the spotlight. To others, he is a savvy marketing genius who is committed to fighting for his sons.

Historically, I have fallen into the former group. I’ve criticized the elder Ball for plenty of offenses – such as when he pulled his youngest son, LaMelo Ball, out of high school to play professionally in Lithuania. I also strongly believe that LaVar Ball’s over-the-top antics put far too much pressure on his sons. Furthermore, Big Baller Brand was trash even before Lonzo Ball was allegedly scammed out of $2 million by co-founder Alan Foster.

However, sports media outlets continued to thrust LaVar Ball into the spotlight. His propensity for hyperbole and exaggerations served as ratings gold for ESPN and other networks. Now ESPN has decided to draw the line and keep LaVar Ball off the airwaves. However, its reasoning might just be all wrong.

Monday, LaVar Ball appeared on “First Take,” with Stephen A. Smith, Max Kellerman and Molly Qerim to discuss Lonzo Ball’s trade to the Pelicans. Qerim interrupted the typical clash of hubris between Smith and LaVar Ball.

“LaVar, can I switch gears with you…’cause I have a question here?” Querim asked, intending to redirect the discussion.

“You can switch gears with me anytime,” LaVar Ball immediately responded. “Go ahead.”

The camera was focused solely on Qerim during his LaVar Ball’s response. She clearly interpreted the reply as sexual innuendo. Her reaction was one of discomfort. She took a moment to ensure that she kept her composure before saying, “Let’s stay focused here.”

When the camera cut back to LaVar Ball, Smith and Kellerman, Mr. BBB sat straight-faced in between the two clearly confused commentators.

Upon my initial review of the incident, I felt that LaVar Ball’s comment was inappropriate. In the moment, especially with the visual reactions from everybody on set, it appeared that he was being flirtatious.

ESPN later demanded an apology. When LaVar Ball refused, the network announced that he would no longer appear on its platforms. In my mind, it was LaVar being LaVar and long overdue for him to be taken out of the spotlight.

Later, a woman – a black woman – asked me what I thought of the incident. When I happily threw LaVar Ball under the bus, she asked me what exactly he said or did that should have been interpreted as inappropriate. She challenged me to go back and watch the video again.

Upon further review, there’s a great case that LaVar Ball’s comment was completely innocent and misinterpreted. The man who is known for shucking and jiving for the cameras was undoubtedly straight-faced and attentive during the interaction.

There was no mack daddy smile; no LL Cool J licking of the lips; No “wink, wink.” While the three ESPN commentators shared flabbergasted expressions, LaVar looked, well, normal.

Furthermore, he used Qerim’s own words in his response.

“Can I switch gears with you?”

“You can switch gears with me anytime.”

Women should always be free of harassment and sexual advances, especially in the workplace. I stopped listening to R. Kelly long before the docuseries aired. I advocated for locking Bill Cosby up as others defended him with ridiculous conspiracy theories. I support women. I believe women.

However, it’s hard to wonder if this whole incident is a simple misunderstanding – a misunderstanding that reinforces the idea that black men are dangerous predators. As annoying as LaVar Ball has been, he hasn’t shown a history of being a creep. An egomaniac? Absolutely. A chauvinist? Probably.

For the record though, LaVar Ball denied the accusations of inappropriateness.

“I don’t even have to respond to that on the fact that I meant no sexual intent,” LaVar Ball told BallisLife.com. “‘Switch gears’ means change topics to me. Her mind in the gutter if she’s thinking something else.”

Yet to have ESPN effectively ban Ball from the airwaves makes you wonder. The network has no qualms about interviewing Ben Roethlisberger, despite numerous sexual assault allegations over his career. ESPN also did not take issue with Rob Gronkowski twerking on former ESPN personality Jemele Hill.

I believe the real reason ESPN is no longer in the LaVar Ball business is simple. Lonzo Ball is now in small market New Orleans, where Zion Williamson will eat up all the airwaves. LeBron James and Anthony Davis are more than enough star power to keep the headlines pumping in Los Angeles. ESPN simply no longer needs LaVar Ball.

The NBA award show has come and gone. The big news is that Giannis Antetokounmpo earned his first NBA MVP Award. While James Harden had a tremendous season, the voters made the right pick by choosing the Greek Freak as the top player in the league. Antetokounmpo gave a tearful and heartfelt acceptance speech.

It was somewhat of a surprise to see the international players dominate the awards. In addition to Antetokounmpo (who hails from Greece), four of the five top players awards went to international players. Dallas’ Luka Dončić (Slovenia)was named Rookie of the Year. Utah’s Rudy Gobert (France) was named Defensive Player of the Year. Meanwhile Toronto’s Pascal Siakam (Cameroon) earned Most Improved Player. The only player award earned by an American was Sixth Man of the Year, which went to the Clippers’ Lou Williams.

There can be no debate as to whether basketball has truly become a global sport. Congratulations to all the winners.