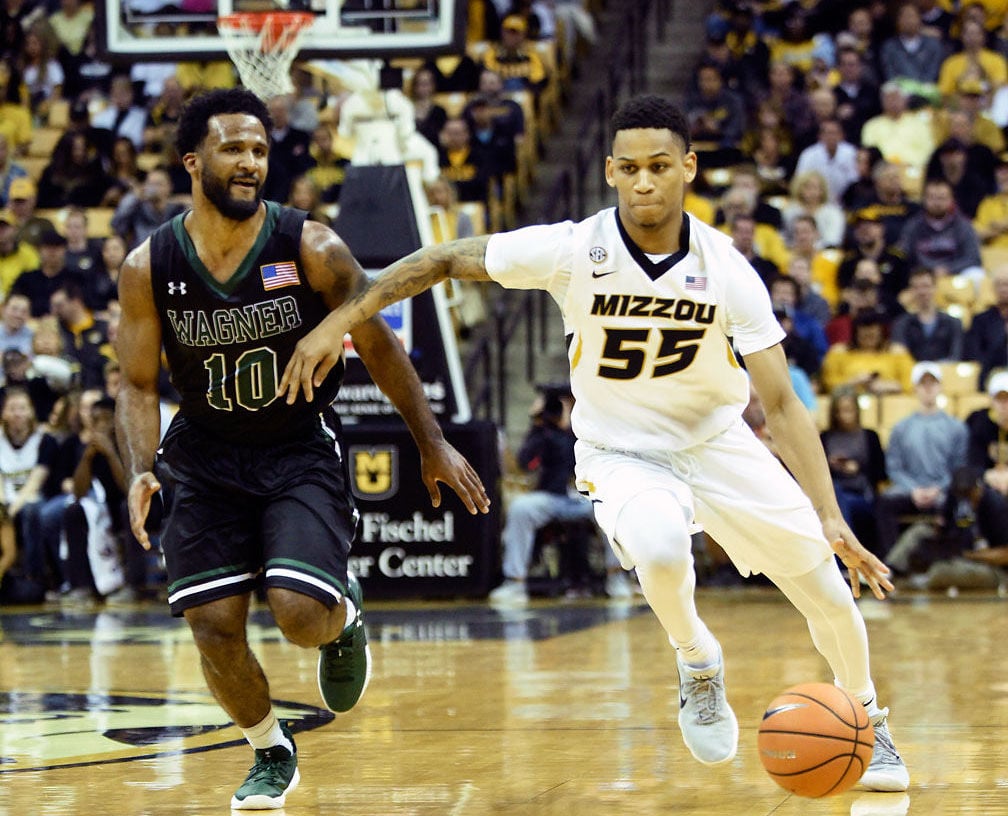 Highly-touted freshman point guard Blake Harris has transferred from Mizzou to N.C. State. Harris and Michael Porter Jr. helped Missouri secure a top-5 ranking for the Tigers’ 2017 class. Now Porter is out indefinitely after back surgery and Harris is gone from the program. 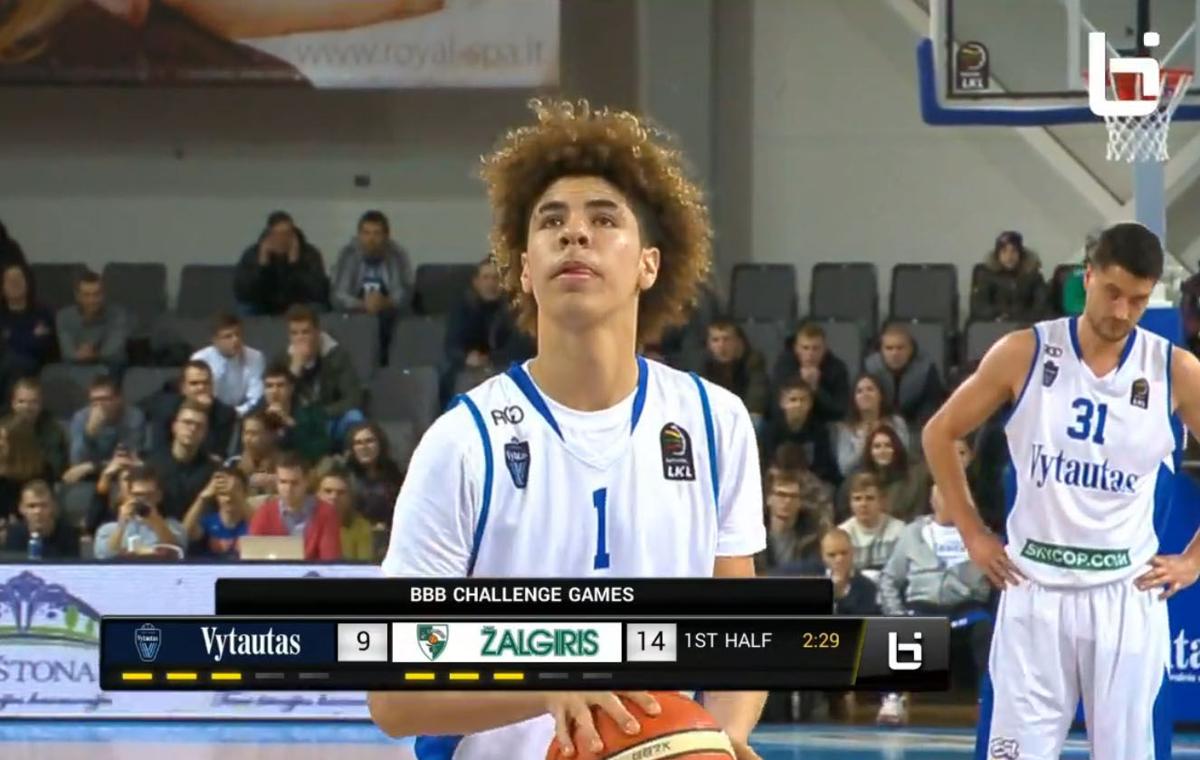 LaMelo Ball shoots a free throw during a matchup between his Prienu Vytautas team and Kauno Žalgiris-2. Ball scored 10 points and nine assists in his European debut.

Somebody, somewhere must have put roots on Mizzou’s athletic program. How else is it possible to explain the infamous Fifth Down Game, Tyus Edney’s shot, Kelly Thames’ injury, Ricky Clemons’ and Dorial Green-Beckham’s legal woes or Michael Porter Jr.’s hernia? It seems that whenever the prospect of Mizzou sports is looking bright, it always finds a way to come crashing down.

Halfway through the season, Michael Porter Jr. is out after back surgery, Harris has transferred to N.C. State, Roberts is gone to Texas Tech and the talented Tilmon has racked up nearly as many fouls (52) as field goals (59).

The loss of Harris is a tough pill to swallow. His numbers weren’t eye-popping at just 3.8 points, 3.1 assists and 2.4 rebounds per game. However, with his extraordinary speed, athleticism and aggression, Harris could have developed into the perfect complement to Missouri’s impressive three-point shooting attack.

At his best, Harris showed the unique ability to turn the corner and break down defenses. His own three-point shooting was non-existent (0-7 on the season), but by getting to the basket, he could create layups for himself or wide open shots for Mizzou’s cache of shooters.

Harris’ minutes were never consistent though. While he started nine games, he was forced to share the point guard duties with Jordan Geist, Terrance Phillips and, at times, Kassius Robertson. For a player who listed as a top 100 recruit by several publications, it’s not surprising that he was unhappy logging just 13.9 minutes per game.

If it weren’t for Michael Porter Jr.’s back surgery, maybe things would’ve worked out different for Harris at Mizzou. With MPJ as the focal point of the offense, maybe Martin would’ve been less concerned about Harris. Even during his starts, it was apparent that Martin had trust issues with his young PG. The Tigers often played Geist or Phillips during crunch time.

The transfers of Harris and Roberts show that luring top recruits isn’t enough. A challenge for Martin will be to manage the egos, confidence and playing time for highly-touted recruits.

At 11-4, Mizzou is still light years ahead of where the program was a year ago. The team still appears on track to make a return to the NCAA Tournament. If Martin can somehow pull off some more recruiting magic and convince Webster Groves’ standout Courtney Ramey to join his AAU teammate Torrence Watson in Columbia next year, the Tigers’ backcourt should prove formidable.

While he’s on the recruiting trail, maybe Martin and his staff can find someone to remove the Mizzou curse once and for all.

A day after Golden State Warriors coach Steve Kerr called LaVar Ball the “Kardashian of the NBA,” Ball proved him right – sort of. Whether you love him or hate him, when it comes to drawing interest and publicity, nobody does it better than LaVar Ball.

Tuesday, LiAngelo and LaMelo Ball’s first game for Prienu Vytautas in Lithuania drew 1.6 million viewers on Facebook Live. The game was part of the Big Baller Challenge, a series of five exhibition games against other Lithuanian clubs.

Prienu Vytautas rearranged its schedule, bypassing the Baltic Basketball League in lieu of the Big Baller Challenge after Big Baller Brand was able to secure a deal with Facebook to live stream the games. According to ESPN, “Prienu Vytautas expects the Ball brothers to generate about 100,000 euros ($120,000) in revenue for the team.”

With the Big Baller Brand logo emblazoned all over the court, the referees uniforms, the company can expect to see a huge come up in terms of brand awareness and potential sales.

Enough about the business aspect, how did the Balls fare in their first taste of international competition?

First, I must point out that the team’s opponent, Kauno Žalgiris-2, was comprised of mostly 16-to-19-year-olds. With that disclaimer, I’d say the Ball brothers displayed a mixed bag of results in their team’s 90-80 victory.

Former UCLA Bruins guard LiAngelo Ball scored 19 points on 8-for-19 shooting. At times, ‘Gelo looked too strong for his opponents in the paint. At other times, he looked downright terrible. He missed a wide open layup and shot an embarrassing air ball.

Lorrrrdd, LiAngelo hoops like a retired fire fighter at the Y.

He wasn’t hating either. There were times when LiAngelo looked like a rec league reserve. Considering that it was his first actual game since Nov., when UCLA played an exhibition game versus Cal State, I’ll give him a pass on his rusty moments.

Still, his play in the post is promising considering that play will become much more physical once Vytautas enters the Lithuanian league.

For 16-year-old LaMelo Ball, his showing was more impressive. ‘Melo dropped 10 points and nine assists in the game, include a few eye-popping finishes at the rim. He also made some impressive assists that garnered “oohs” and “aahs” from the sold out crowd.

LaMelo Ball seems to have a similar and stellar court vision as his oldest brother, Lakers point guard Lonzo Ball. What he lacks though are discipline and defense. If he develops in those areas as a professional in Europe, the sky his dad’s mouth may be the only limit to how far he goes.