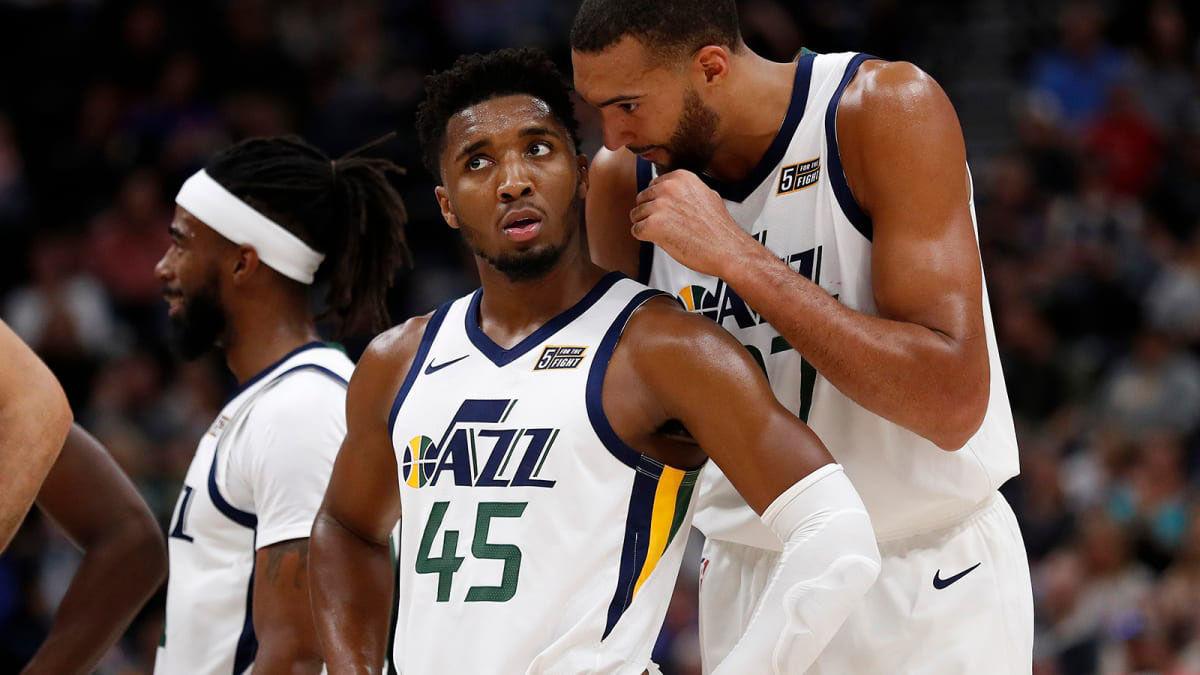 Both Donovan Mitchell and Rudy Gobert of the Utah Jazz have tested positive for COVID-19. Gobert’s positive test prompted the NBA to suspend the season indefinitely. Other sports leagues followed suit, leading to a standstill in the sports world. 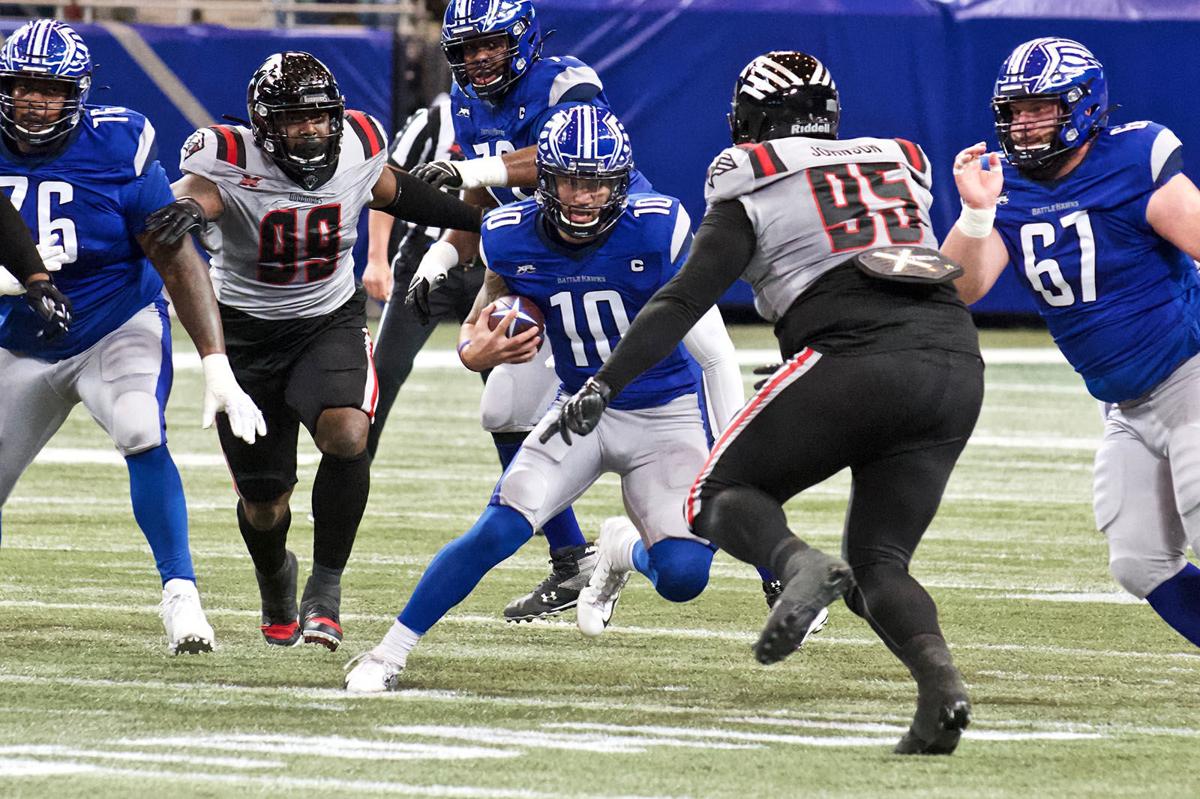 St. Louis Battlehawks QB Jordan Ta'amu tries to escape the New York Guardians defense in the team’s XFL home debut on Feb. 23. Before the season cancelation, the Battlehawks drew more than 57,000 fans in two games and led the league in home attendance.

In last week’s column about the novel coronavirus’ impact on sports, I wrote that the global pandemic was “traveling across the globe at light speed.” At the time, the NCAA had announced that the NCAA Tournament would be held in nearly empty arenas. The NBA had announced it was considering playing games in the same manner. By the time The American hit newsstands on Thursday morning, the conversation had changed dramatically.

Wednesday night, Utah Jazz doctors learned that center Rudy Gobert was infected with COVID-19. The test results arrived just before the Jazz were set to face off against the Oklahoma City Thunder. That set off a dramatic, movie-like scene that involved the officials being rushed off the court for a meeting right before tip-off. The players were sent back into the locker room. Fans were filled with confusion and disappointment. The game was postponed.

Later that night the NBA announced it would suspend the season indefinitely. It was the right move too. Since the league announced the suspension, several players have tested positive for the virus including, Kevin Durant (Nets), Donovan Mitchell (Jazz), Christian Wood (Pistons) and other unnamed players. That toll will likely rise and many teams have yet to test their players, but will likely do so in the coming days and weeks.

“We wish them a speedy recovery. But, with all due respect, an entire NBA team should NOT get tested for COVID-19 while there are critically ill patients waiting to be tested. Tests should not be for the wealthy, but for the sick,” de Blasio tweeted.

While I agree with de Blasio that testing should be available for critically ill patients, he is absolutely wrong that NBA players should not be tested. Due to the immense amount of travel of professional athletes endure and the amount of interactions with other players and the general public, it is essential that they be tested.

Some conspiracy theorists have asked why there are so many athletes and celebrities testing positive for COVID-19 and it’s simply because they have the means and connections to be tested. No, it’s not fair, but it is life in our capitalist society.

What if NBA teams did not test their players and continued to practice and scrimmage? How many more people would be potentially exposed to the virus? Once Gobert became the NBA’s patient zero, it became very important for all teams to test their players, when possible.

A better idea for de Blasio would have been to encourage the NBA to use its wealth and means to help ensure that people in their communities could have access to coronavirus tests once they are available in greater supply.

Nearly every other major sports league has followed suit and postponed or canceled their seasons. Local prep sports are likely shut down for the rest of the school year. The sporting world has come to a standstill.

If you’re looking for a sports fix today, your best bet is to either tune into ESPN Classic or fire up your gaming system and load up Madden, 2K, FIFA, etc.

Just because there are no games happening on the court/field, doesn’t mean that there is nothing to talk about in sports. The NFL offseason is in full swing. The first big bombshell dropped when Tom Brady announced that he will not re-sign with the New England Patriots.

"Although my football journey will take place elsewhere, I appreciate everything that we have achieved and am grateful for our incredible TEAM accomplishments," Brady wrote in an Instagram post.

Love him or hate him, Brady is the most-decorated NFL quarterback in history. As a Patriot, Brady has won six Super Bowl championships, three league MVP awards, 14 Pro Bowl selections and 30 playoff games (an NFL record).

The 42-year-old Brady has consistently stated that his goal is to play until he is 45. It seems that the Patriots may have had reservations committing to the graybeard for three more years.

According to ESPN, Brady is expected to sign with the Tampa Bay Buccaneers. If that happens, Brady should instantly turn the 7-9 Buccaneers into a playoff contender. The Bucs already boast two 1000-yard receivers in Mike Evans and Chris Godwin.

On the flip side, Brady has never thrown for more than 14 interceptions in his career and averages less than 10 per season. It’s true that Brady in a Buccaneers jersey will look just as odd as Joe Montana in a Chiefs jersey during the 1993 and 1994 seasons. If you recall, Montana led the Chiefs to the playoffs in both of those seasons.

XFL season down for the count

St. Louis football fans can’t seem to catch a break. Just as Battlehawks mania was sweeping through the 314, the XFL was forced to end its inaugural season due to the coronavirus.

Before the XFL season was canceled, the Battlehawks announced the team would open up the upper deck of The Dome to accommodate more fans. In the team’s first two home games, St. Louis drew 29,554 and 27,527 excited fans. After four weeks, the team led the league in home attendance, outpacing the Seattle Dragons by nearly 6,000 fans.

Now that the season has been canceled, St. Louis fans will have to wait until 2021 for live, professional football. Luckily for football fans, the XFL announced that it would pay players for the full season and is committed to returning for a second season.

After a successful four weeks for the league, it’s quite possible that several XFL players may end up on NFL rosters.

Follow Ishmael and In the Clutch online at stlamerican.com and on Twitter @ishcreates. Let me know how you are dealing with the sports outage during these tumultuous times.