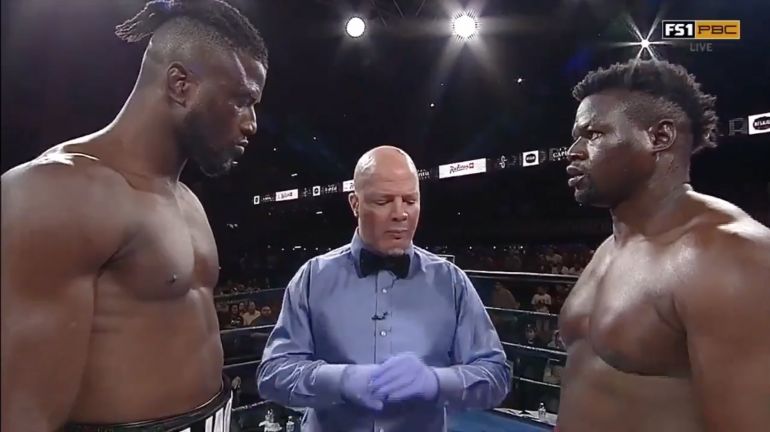 After touching gloves with Efe Ajagba (left) at the center of the ring, Curtis Harper (right) walked out of the ring and headed back to the locker room. The heavyweight fighter was upset over his pay and circumstances surrounding the fight contract. 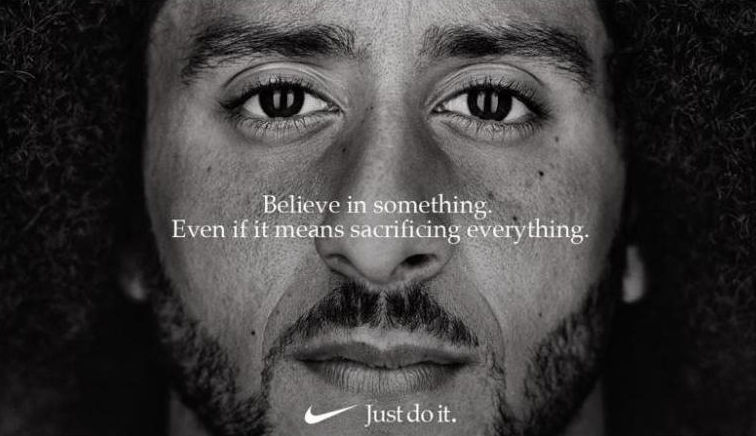 Colin Kaepernick is one of the athletes featured in the 30h anniversary of Nike’s ‘Just Do It’ ad campaign.

Boxing fans are accustomed to weird occurrences. In fact, every Ripley’s Believe It or Not museum should have a wing set aside for the sweet science. What other sport can you find personalities as big and brash as Muhammad Ali, Mike Tyson, Floyd Mayweather Jr. and Don King?

Boxing’s history is littered with zany moments. Ask a fight fan about the Fan Man (a man who parachuted into the ring during a fight), the Bite Fight (Tyson snacked on Evander Holyfield’s ear) or “No Mas” (Roberto Duran quit during a big fight with “Sugar” Ray Leonard) and their eyes will immediately light up as they recall the insane tales of unexpected occurrences.

Not all the sport’s strange moments happened inside the ring. Riddick Bowe infamously threw his WBC heavyweight belt in a trash can rather than face off against Lennox Lewis. Tyson and Mitch “Blood” Green once banged it out in the streets of Harlem. Bernard Hopkins was literally chased out of town by a mob of angry fans after he slammed the Puerto Rican flag to the ground in San Juan.

Needless to say, when it comes to boxing, bizarre is considered par for the course.

The latest entry into boxing’s encyclopedia of ridiculousness occurred on Aug. 24, when Curtis Harper (13-6-0, 9 KO) was set to face off against highly-touted prospect Efe Ajagba (6-0-0, 5 KO) in a televised Premier Boxing Champions fight on FS1.

In most cases, nobody is showing up to the restaurant for the bread rolls. However, since you’re already there, you hope they are fairly decent.

Everything seemed normal when the fighters stepped into the ring. They were introduced to the fans. Cornermen gave last-minute commands to their charges. The combatants received the instructions from the referee at the center of the ring. Harper and Ajagba touched gloves.

The fighters returned to their respective corners to await the bell, seemingly ready to rumble. Once the bell was tolled, the almost-unthinkable happened. Harper calmly stepped back through the ropes, walked down the stairs, to the catwalk and disappeared back into the dressing room.

Onlookers were stunned, as was the FS1 broadcasting crew.

“Wait! What?” Jermall Charlo asked. The former IBF super welterweight titlist was serving as a commentator for the fight.

Angry fans in attendance yelled at Harper on his way back to the locker room. He was called a coward on social media.

Ajagba’s promoter, Richard Shaefer attempted to seize the moment to pump up his prodigy.

"This was legendary, Schaefer told ESPN. “We waited a long time to have another heavyweight who instills fear in his opponents by just being in the ring and looking at them.”

According to Harper though, it wasn’t fear that drove him to ease on down the road. Harper said he chucked the deuces to Ajagba due to a lack of money and respect by the fight’s promoters.

"I signed the contract, but they never gave me a signed contract back,” Harper told Sporting News. “They told me that there was no TV, and then it was a TV fight. I kept asking for the signed contract, and they wouldn't give it to me."

ESPN reported that Harper was set to earn just $6,000 for the fight, despite the fact that it was televised.

It’s likely that the Minnesota boxing commission will withhold Harper’s pay and hit him with a suspension for walking out of the ring. The fight was declared a disqualification. Harper was accessed with a loss on his record. He has already petitioned to have the DQ changed to a No-Contest.

While his protest is likely to get him blacklisted by plenty of promoters and matchmakers, PBC should give him a big, fat bonus. The YouTube clip of Harper’s walkout has amassed more than 800K views. Who knows how many additional times the footage has been shared on Twitter and Facebook. Harper has been meme-ified.

Had he actually gone through with the fight against Ajagba, it’s unlikely the bout would have gotten more than 10,000 views. Maybe he’ll even land a Pizza Hut commercial like former Tyson knockout victim Peter McNeeley back in the 90s.

Nike claps back with Kap snapbacks?

Shout out to Nike to making Colin Kaepernick a central figure in its 30th anniversary “Just Do It” campaign. The first ad was revealed this week. It featured a close-up of Kaepernick’s face with text that reads, “Believe in something. Even if it means sacrificing everything.”

It was later revealed that although Kaepernick hasn’t suited up in the NFL since 2016, Nike has still honored the endorsement contract it had with the former San Francisco 49ers QB. He is also expected to be featured in upcoming Nike apparel.

MAGA Americans were predictably incensed by the news. Some went so far as to burn, cut and/or destroy Nike branded footwear and apparel and post the footage onto social media.

The POTUS called the upcoming Kaepernick-featured marketing campaign, “a terrible message and a message that shouldn’t be sent.”

Ironically, that sentiment applies to every tweet sent by the current commander-in-chief.

Kudos to Nike for taking the risk to publicly support Kaepernick. Many brands are currently scrambling to avoid angering anybody in this highly-polarized political climate. However, Nike has shown that it isn’t afraid to pick sides when it comes to the fight for civil rights and social justice. The brand has also always supported LeBron James’ activism efforts.

Many believe that it’s just a money grab for Nike.  While Nike will be glad to capitalize on the “woke” dollar, my hunch is that the move was done moreso as a chess move in the battle for high-profile athlete endorsers.

The athletic footwear and apparel landscape has changed significantly over the past few years. The Swoosh is now fielding challenges from Adidas, Under Armour, Puma, Anta, Li Ning and others when it comes to signing the biggest stars in sports.

By showing it will go to bat for Kaepernick, Nike is letting other athletes know it will have their backs as well.