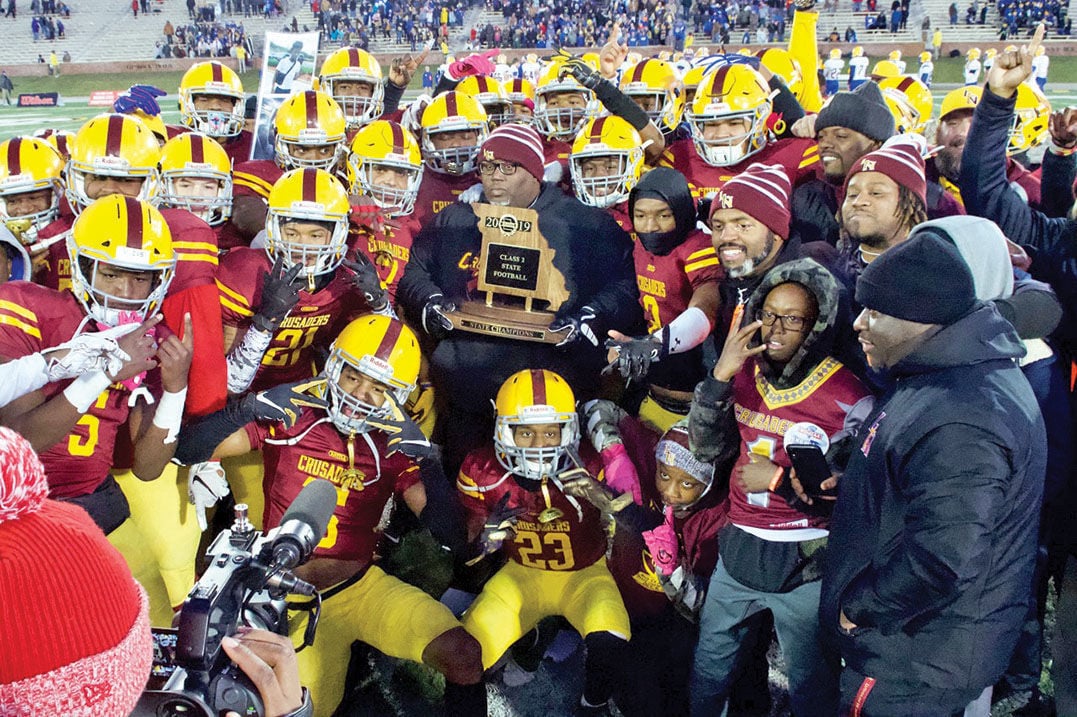 Lutheran North (14-0) won its sixth state championship and its first since 1999. It was the first time in school history that the Lutheran North Crusaders finished undefeated. After the season, John Burroughs School, a nine-time state champion, announced it would become the third school in the Metro League to remove the Crusaders from their schedule. 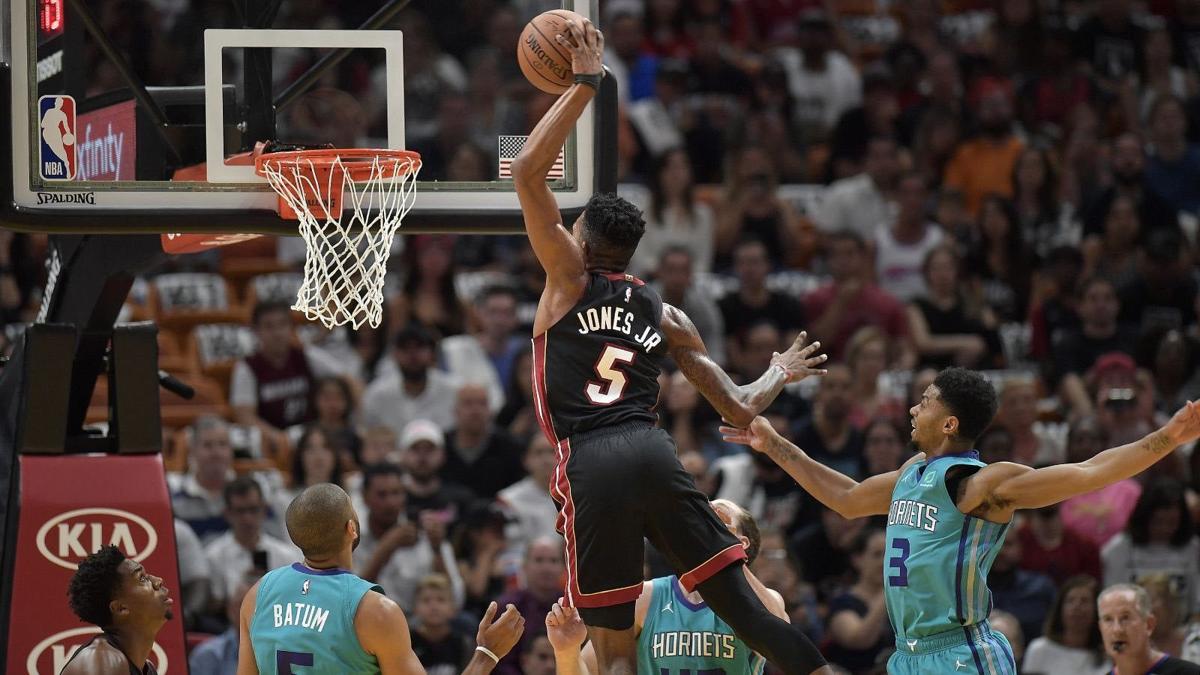 Though he faces stiff competition in the NBA Dunk Contest, Derrick Jones Jr. is the clear favorite for the title.

Disbelief is an understatement. My jaw dropped wide open, like a cartoon character, when I learned that John Burroughs decided to remove Lutheran North from its football schedule. As a graduate of Lutheran North, the decision just didn’t make sense.

Though I graduated from North many moons ago, I have vivid memories of circling John Burroughs and MICDS our schedule as the toughest teams that the Crusaders would face in any given season. Those teams were hard-nosed, well-coached and talented. You knew there would be big hits and bruises after facing off against the Bombers.

Yet, Ben Fredrickson of the Post-Dispatch reported that despite an even 5-5 head-to-head record over the past decade, Burroughs made the decision to drop Lutheran North from its schedule.

Many have suggested that race has something to do with why so many teams are refusing to add the Crusaders to their schedules. It is important to note that North (Carl Reed) and Burroughs (John Merritt) have black head coaches.

While I won’t speculate on what is going on in the minds of the decision-makers at Burroughs, I did notice an interesting fact.

Over the past decade, Burroughs also has a 5-5 record against MICDS. However, in the last three meetings, Burroughs has lost 43-22, 43-0 and 53-0. Those are hardly nail-biters. Yet, to my knowledge, there has been zero talk about Burroughs removing MICDS from its schedule.

It’s fair to ask, what’s the difference? If the Crusaders are too big and bad for Burroughs, why isn’t the same true for MICDS?

Beyond the politics of the move, Burroughs’ decision to duck to Crusaders sends a terrible message to its students. The old adage favored by cynics used to be, “If you can’t beat them, join them.”

All athletic teams have ups and downs. Look no further than the Golden State Warriors. The Warriors went 40 years without winning an NBA championship. Then the team appeared in five-straight NBA Finals – earning three championships.

This season, with Steph Curry and Klay Thompson on the sidelines, the Warriors have the worst record in the NBA. Should the Warriors simply remove the Lakers and Clippers from their schedule because they can no longer compete?

Mizzou football has lost six straight games against Georgia. Should the Tigers petition to remove the big, bad Bulldogs from the schedule? No. Those suggestions are laughable. So too is the decision by Burroughs to bypass the Crusaders.

If Burroughs can’t compete with Lutheran North, the coaches should be working harder on developing better schemes and plays. The players should be putting more time in the weight room and the video room.

After all, this week we saw the 30th anniversary of the greatest upset in boxing history. It was February 11, 1990 when James “Buster” Douglas, a 42-to-1 underdog, shocked the world by knocking out Mike Tyson in Tokyo. Nobody believed that Douglas deserved to be in the same stratosphere as Tyson, much less in the same ring. Yet Douglas put in the work. Tyson underestimated his opponent. The rest is history.

What would sports be without stunning upsets? What if the St. Louis Blues gave up when the team sat in last place at the halfway point a season ago? What if the 25-10 NC State Wolfpack decided not to show up to play the 31-2 Houston Cougars in the 1983 NCAA Tournament Championship Game?

Instead of preparing to pull off an improbable victory – instead of working to make history - a Hall of Fame football team decided to take its ball and go home. That decision is a bigger L than it could have ever suffered on the field.

The NBA’s All-Star Weekend is upon us. That means a host of exciting contests and activities lie ahead.

Here are my picks for the winners of the most-exciting events.

Skills Challenge: I’d love to see STL’s Jayson Tatum defend his Skills Challenge crown from a year ago. Unfortunately, I think he may have used up all his luck with that half-court heave in the 2019 contest. I’m taking one of the OG’s in the competition – Khris Middleton defeats Jayson Tatum.

3-Point Contest: Trae Young has a chip on his shoulder after being bypassed for the 2020 Team USA Olympic basketball team. I think he’ll use the 3-Point contest and the All-Star Game to put Team USA on notice that it made a big mistake. Trae Young defeats Buddy Hield.

Slam Dunk Contest:The dunk contest welcomes back former winner Dwight Howard and a guy who should be a former winner in Aaron Gordon. But the bigs don’t stand much of a chance against the small guys with big hops. Derrick Jones Jr. defeats Pat Connaughton in a tremendous battle of high  flyers. Both can fly but Jones is just different.

All-Star Game: Giannis Antetokounmpo is an outstanding basketball player but is not the real MVP when it comes to being an All-Star captain. He likes to select hungry players. Sometimes, talent just wins out. Team LeBron defeats Team Giannis for the second straight season.

Let me share some ADDITIONAL information to this poorly conceived accusation of racism.

The Zeke Elliott - Foye Oluokun effect. These two beat LN 4 years straight. Not Burroughs. Takeout the years that one of the top footballs players IN THE WORLD was on the team and the record looks mighty different. In the 10 years (not including the Zeke / Oluokum years) the record is JBS 2 / LN 8

As for MICDS vs JBS, These schools don’t run a football recruiting powerhouse. They play with their student body. Their prowess will ebb and flow with attendance. It is no longer a level playing field.

And I say, great work by Coach Reed! He's done a masterful job creating an amazing football program. He's helping kids better their lives, improve the chances of future success and teaching wonderful life lessons. And thats not going to change in the next many years. They will continue to be a powerhouse in St. Louis football.

Here's the right question to be asking: Why would LN want to continue playing teams that they beat by 50+ points? And, why would a coach ALLOW their team to run up the score to that point?

So, where’s the racism in not wanting your kids to play against people so much bigger and stronger?

Is Wash U racist for not playing Mizzou in football? Or basketball?

Thanks for your comment. But your Mizzou/Wash U. example is a bit of a reach. JBS has over 600 students. LN has less than 300. Mizzou has over 22K undergrads vs Wash U's 7K. Plus Mizzou is a Division 1 school while Wash U is D3.

Meanwhile, JBS and LN are literally in the same conference. They have been playing each other for decades. Burroughs has often gotten the better of North. The Bombers destroyed the Crusaders 53-12 in 2015. Guess what? In 2016, North picked themselves up and won 34-14.

Also, LN boys have not beaten JBS in soccer since 2009. Girls haven't scored a goal since 2012! Yet the Crusaders still show up every year to compete.

I'm with you on most of what you wrote in response. But it dosent change two important things. 1- Reed has created a recruiting powerhouse. An that's not going away any time soon. 2- The difference in size and athleticism is substantial. And that too is likely to go unchanged.

Reed has done an amazing job developing his football program. I don't fault him at all. It great that he has created opportunities for so many young men. Its just not a level playing field anymore and it's time to part ways. And as a stakeholder in this situation, I'm happy for the change.

As for soccer, maybe its time for a change there too.

The inference that this is race-based is ridiculous too.

I'll add, a positive story about Reed, his players and their incredible success through hard work and dedication would have been an alternative angle. How they improved so much that they have outgrown the conference. Now, that's a great story! Or, the racist white rich kids run away from the scary black guy. That was your choice.