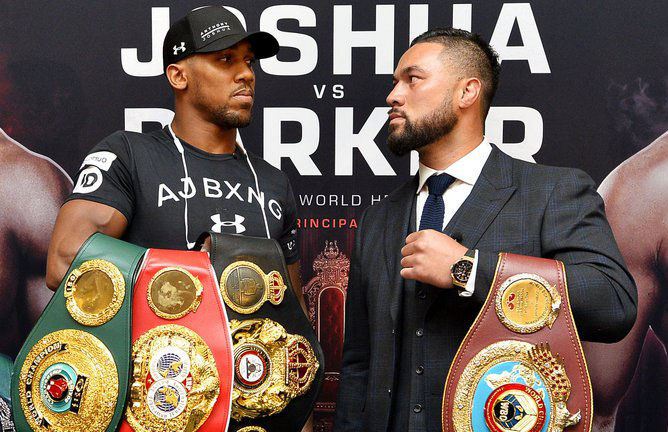 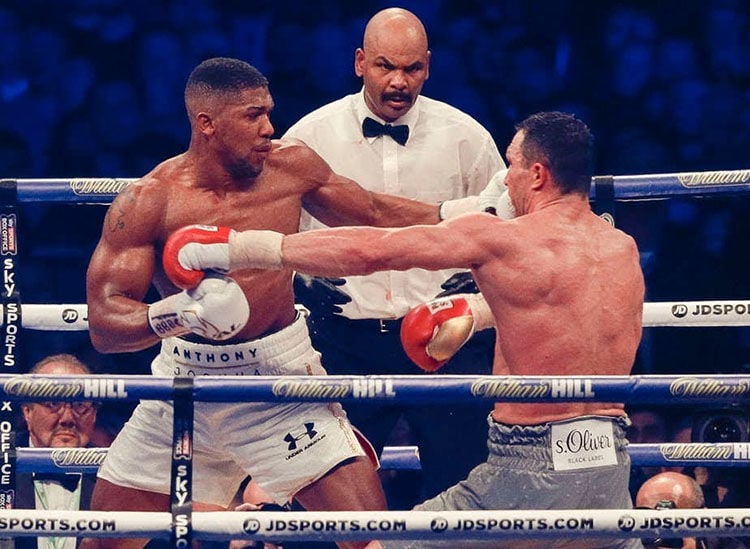 Anthony Joshua lands a powerful left hand to the face of former heavyweight champion Wladimir Klitschko. Joshua knocked out Klitschko in the 11th round of their fight to earn the title as the man to beat in the division.

The term March Madness is normally reserved for the wild and wacky ride that occurs during the NCAA Tournament. When it comes to NCAA basketball, this year’s tournament has been as wild a ride as we’ve had. However, for boxing fans, the madness of March has less to do with the journey to crown a national champion. It has everything to do with coronating a true heavyweight champion.

On March 3, WBC champion Deontay Wilder, the towering, trash-talking, free-swinging tussler from Tuscaloosa made his claim as the man in the heavyweight division by knocking out Luis Ortiz in a scintillating title defense.

Saturday, March 31, England’s Anthony Joshua will put his WBA and IBF titles on the line against New Zealand’s Joseph Parker, the WBO champion. The victor will nudge us one step closer to witnessing the first undisputed heavyweight champion since Lennox Lewis earned the distinction in 1999.

Joshua, boxing’s biggest star now that Floyd Mayweather Jr. is retired, is a 6-to-1 favorite in the fight and with good reason. The 28-year-old Joshua (20-0-0, 20 KO) defeated longtime heavyweight champion Wladimir Klitschko last April. Though Klitschko was never technically the undisputed heavyweight champion, he was universally recognized as the ruler of the division for more than a decade.

In his first fight with an elite opponent, Joshua not only stopped Dr. Steelhammer, he did it in front of 90,000 screaming fans. He was immediately deemed the man to beat in the newly energized heavyweight division.

While Joshua has become accustomed to fighting in front of more than 70,000 people in recent years, this will be Parker’s first time in front of a massive crowd. He’ll be in hostile territory at the Principality Stadium in Cardiff, Wales. However, as the lesser-known and underdog fighter, Parker should enter the bout with none of the pressure and all of the motivation.

Parker is the faster, more fluid fighter. If he expects to pull off an upset, he’ll need to fight at a fast pace for 12 full rounds. Parker may boast an undefeated record and a 75% knockout ratio, but make no mistake about it; Parker can give you a headache. Joshua will give you a concussion.

The Kiwi is expected to enter the ring around 238 pounds this weekend. In the past few bouts, Parker has weighed closer to 250 pounds. As a result, he saw a dip in hand speed and has been forced to rely more on his power than setting up the swift and deft combinations that helped him ascend the heavyweight ladder.

If Parker tries to go blow-for-blow with “AJ,” he’ll be asleep by the fourth round. He must rely on crisp body-to-head combinations, movement, stamina and timing. If Parker can take Joshua into deep waters, he can tire out his more muscular opponent, force his hands to drop and land a jab/straight right combo that could change the fight (and his future).

Joshua’s chin and stamina are somewhat questionable. So Parker needs to test them both to emerge victorious.

Though Joshua’s promoter Eddie Hearn has claimed his fighter would be “leaner and lighter” for his fight with Parker, it’s likely that Joshua will tip the scales around 250. His best bet in the fight is to be the bully. He’s the bigger star, the bigger puncher and will receive the bigger paycheck. Joshua has a Mike Tyson-like aura surrounding him, where fans expect to see him destroy opponents as quickly and violently as possible.

Though I pointed out that Joshua is known to drop his hands as a fight progresses, the same is true for Parker. Joshua should attempt an all-out assault for the first three or four rounds. He must immediately pounce on his opponent to sap any confidence Parker brings to the ring.

Tyson once said, “Everyone has a plan until they get punched in the mouth.”

Joshua’s mindset should be to make Parker go from plan A to plan Z all within the first few stanzas. If Joshua can take his opponent’s fighting spirit in the early rounds, he can transform a dangerous opponent into a deer in the headlights.

The idea that the once-docile heavyweight division is creating excitement and enthusiasm is remarkable. We are in an era where top-ranked fighters often make business decisions to maximize pay and minimize risk. However, we are watching the #1 (Joshua) and #3 (Parker) heavyweight fighters face off the same month that the #2 (Wilder) and #4 (Ortiz) rated did battle.

Like in the previous bout, I think the bigger star and more powerful puncher will emerge victorious. Joshua is simply too strong for Parker to keep at bay for 12 rounds. It should be an exciting clash while it lasts, but expect Joshua hit Parker’s snooze button in the fourth round.

More importantly, after the fight I expect Joshua to announce his intention to fight Wilder in his next bout for the chance to become the undefeated, undisputed heavyweight champion of the world. That’s the fight the world is waiting to see.