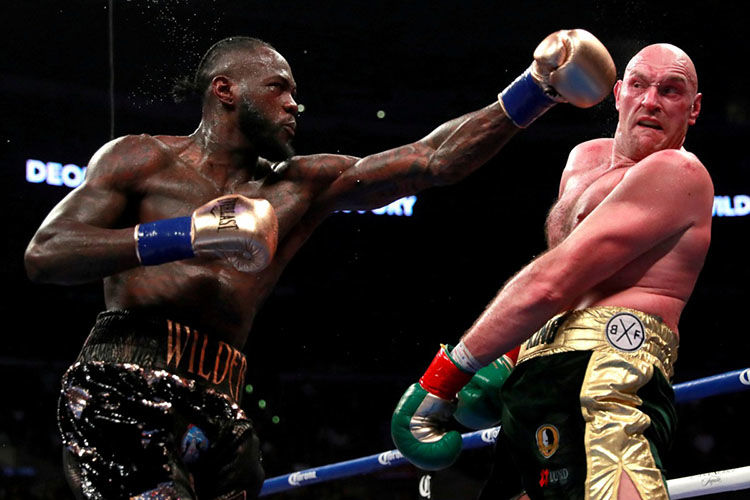 Tyson Fury (right) dodges a jab attempt from Deontay Wilder during their first fight in December 2018. Wilder and Fury fought to a draw in a fight that featured masterful boxing by Fury and vicious knockdowns by Wilder. 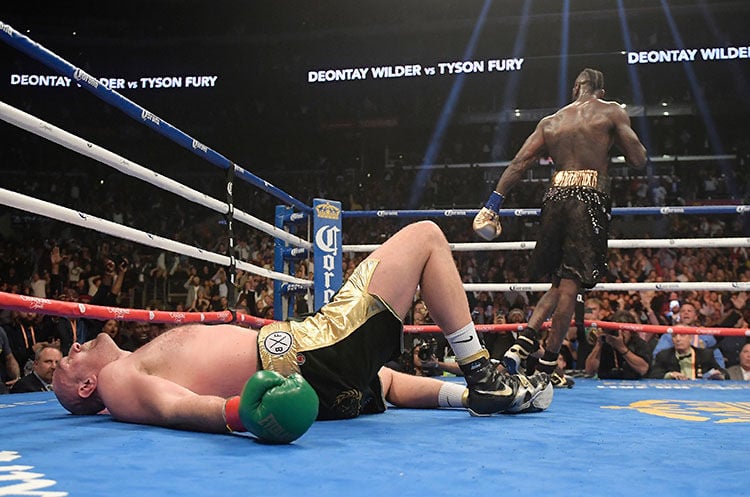 Tyson Fury lay flat on his back, seemingly unconscious, after eating a two-punch combo from Deontay Wilder. To the shock of everyone watching, Fury beat the count and continued to fight.

To call Tyson Fury a confounding individual would be a bit of an understatement. At 6-foot-9 and north of 250 pounds, Fury is one of the biggest heavyweight champions in history. His name – Tyson Fury – is the perfect name for a heavyweight fighter. It’s a name I might have chosen for the create-a-boxer mode while playing Fight Night video games. It evokes images of carnage, viciousness and knockouts.

In reality though, despite his massive frame, Fury is more Pernell Whitaker or Floyd Mayweather Jr. than Mike Tyson or George Foreman. The giant “Gypsy King” is extremely agile and fluid in the ring. The lineal heavyweight champion is a pure boxer who utilizes a stiff jab, excellent head movement and fantastic footwork to often leave his opponents confused and befuddled.

WBC heavyweight champion Deontay Wilder is no small man either. At 6-foot-7, Wilder fits in just fine in the era of supersized heavyweights. Sitting south of 220 pounds, Wilder may not carry the weight of Fury. However, his vaunted right hand carries a ton of power.

Count Wilder as one who was left befuddled by Fury’s technical wizardry. Over the first eight rounds of their December 2018 fight, Wilder landed just 43 of 289 punches (14.9 percent). Meanwhile, Fury landed 58 of 226 punches (25.7 percent). It seemed that Fury might be able to jab, feint and dance his way around the most feared puncher since “Iron” Mike Tyson. Fury put on a mini boxing clinic.

However, in the ninth round, Wilder’s power caught up to Fury and sent him to the canvas. Then, in Round 12, Wilder landed a straight right hand followed by a left hook that left Fury flat on his back. Fury lay motionless on the mat, seemingly knocked out cold for five full seconds. Then, in a moment that will remain etched in the memories of boxing fans forever, Fury simply popped up as if nothing had ever happened.

He beat the count. He finished the fight on his feet, even fought a competitive final round. The judges ruled the fight a majority draw and the fight became an instant classic.

Fourteen months and four fights (two apiece) later, Wilder and Fury are finally set to meet again for a highly-anticipated rematch. Many believe that the fighters should, and will, stick to their bread and butter. Wilder will be seeking to knock Fury unconscious. Fury will be seeking to outbox his opponent – or will he?

During the press run until this weekend’s fight, Fury has been telling everyone who will listen that he intends to give Wilder a dose of his own medicine. Instead of trying to beat Wilder on points, he’s planning to knock out “The Bronze Bomber.”

“I'm not going to get a decision. I'm going to knock him out because I need to,” Fury told ESPN. “There ain't no Tyson Fury points victory in America over the longest-reigning heavyweight champion. I'd rather die than do that. I'm going to drag Wilder to somewhere he's never been before."

Fury and his team have been screaming to the high heavens about a second-round knockout. Can that possibly be his fight strategy or is he simply selling wolf tickets to help sell the PPV?

Fury might be crazy, but he’s not that crazy.

After all, though Fury has 20 KOs in 30 fights, his stoppages have come against badly overmatched opponents. Derek Chisora may be his most accomplished knockout victim and he’s been stopped more times than a young, black man driving through North County.

Wilder is one of the hardest-punching heavyweights in history. The only man to last 12 rounds with Wilder, besides Fury, was Bermane Stiverne – who lost a unanimous decision to Wilder in 2015. In the rematch, nearly three years later, Stiverne went to sleep in Round 1.

A then-undefeated Luis Ortiz lasted 10 rounds before getting stopped by Wilder during their first matchup in 2018. Ortiz, whose only two losses have come at the hands of Wilder, was stopped in the seventh round of the rematch.

"His right hand is more powerful than one could imagine," Ortiz told Business Insider.

Ortiz said that before his rematch against Wilder. Despite knowing the danger of Wilder’s right hand and despite being one of the top heavyweight tacticians around, Ortiz was still knocked out again.

Like Fury, Ortiz out-boxed Wilder for long stretches. Ortiz swept the first five rounds on the judges’ scorecards in November. In the seventh round Wilder landed a flush right hand and “King Kong” came crashing to the canvas.

Wilder can be out-boxed, but for how long? That is a question that Fury will answer Saturday night.

Wilder knows that he can hurt Fury. Fury knows it deep down too. Furthermore, Fury recently switched trainers. He ditched Ben Davison and hired Sugar Hill Steward, the nephew of Hall of Fame trainer (the late) Emanuel Steward.

Changing trainers months before a major fight is rarely a great idea. While Fury is experienced enough that a change in trainers should not hurt him terribly, it’s unlikely to help him. If anything, Steward is more likely to stop the fight should Fury find himself in trouble. Davison didn’t throw in the towel during the first fight when Fury appeared unconscious. Without spending a lot of time together to understand his resolve, Steward may have made a different call.

Though Wilder is still an imperfect fighter, he has better boxing instincts than he is often given credit for. He also possesses the ultimate equalizer – that right hand. It’s made a believer out of me.

Wilder put it perfectly before his second fight against Ortiz.