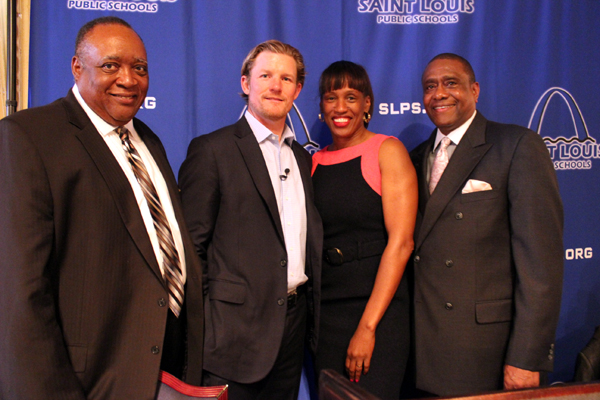 Last week was very eventful for me as I had the opportunity to participate in two special events that recognized our young people for outstanding achievement.

On May 1, I attended the second annual St. Louis Public Schools Scholar-Athlete Luncheon, which was held at the Missouri Athletic Club. I attended the inaugural event last year, but this year’s luncheon was bigger and even better.

The purpose of the Scholar-Athlete Luncheon was to recognize those young athletes at SLPS high schools who have achieved a grade point average of 3.25 and higher. There were 311 athletes honored at the first event. At the second one, there were 412 scholar-athletes honored, which was an increase of 101. Tremendous.

“The major goal of the luncheon was to promote the understanding that interscholastic athletics and activities are an important part of a comprehensive education,” said Travis Brown, SLPS Director of Athletics. “The Scholar-Athlete Luncheon also focused on the academic success of all student athletes and their commitment, self-discipline, honesty, dedication, teamwork and cooperation. These attributes are all valuable lessons they can impart not only in the classroom but also on the field, court, track and in life.”

I had the opportunity to serve as one of the 47 table role models for the event. Each of us role models had our own table with a group of student athletes to break bread and fellowship.

East St. Louis native and Olympic hero Jackie Joyner-Kersee provided a wonderful and inspirational keynote address to the student-athletes. She was followed by another great speech delivered by St. Louis Rams General Manager Les Snead. It was a good time had by all.

First, I would like to congratulate all of the kids for their outstanding achievement in the classroom and on the athletic field. Also, I would like to thank Travis Brown for allowing me to be a part of this special event once again.

On Sunday, I served as the Master of Ceremonies at the Larry Hughes High School Athletic Awards Banquet, which was held at the Hilton at the Ballpark. The event was presented by the St. Louis Gateway Classic Sports Foundation. It was a wonderful banquet and always one of the highlights of my sports season.

More than 60 athletes from all over the St. Louis metro area, representing 10 different sports, were honored. Jackie Joyner-Kersee was in attendance and gave some very inspiring words as did Hughes, the former CBC and Saint Louis U. star who played 13 seasons in the National Basketball Association.

The best part of the event was that the athletes had the opportunity to walk the red carpet before the event like superstars in the entertainment industry.