MICDS Rams Steven Hall (9) picking up yards on Luthran North with blocking from MICDS' Davis Schukar (55) on Friday October 01, 2021 at Lutheran North High School. The Rams would defeat the Crusaders 56-37. 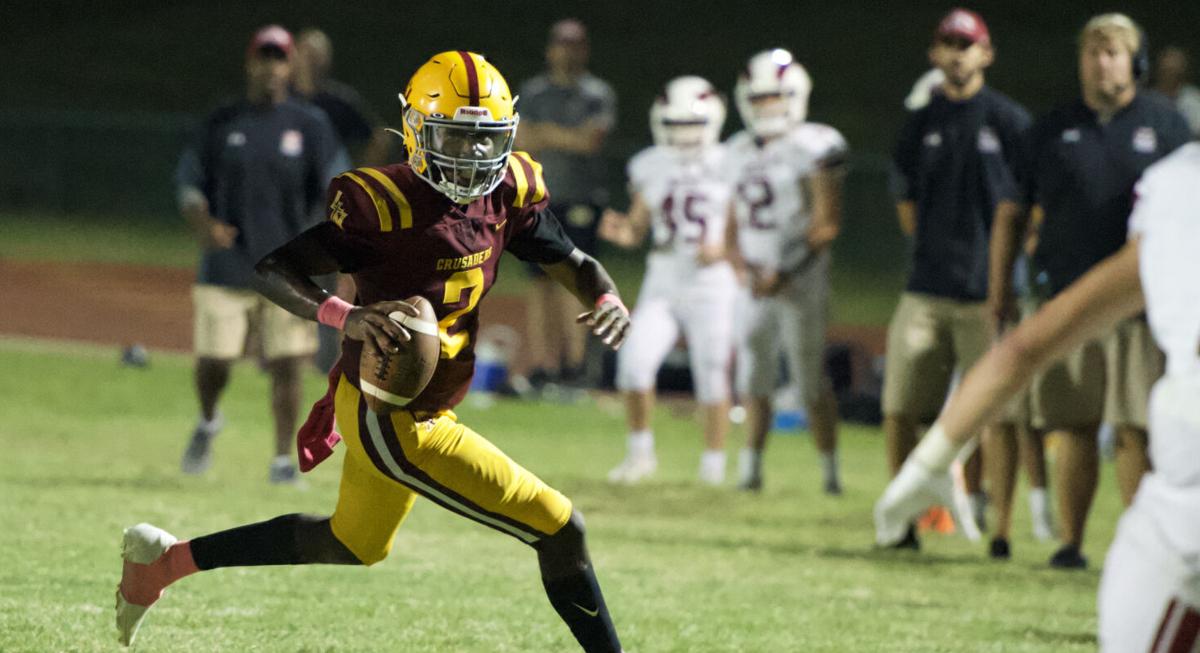 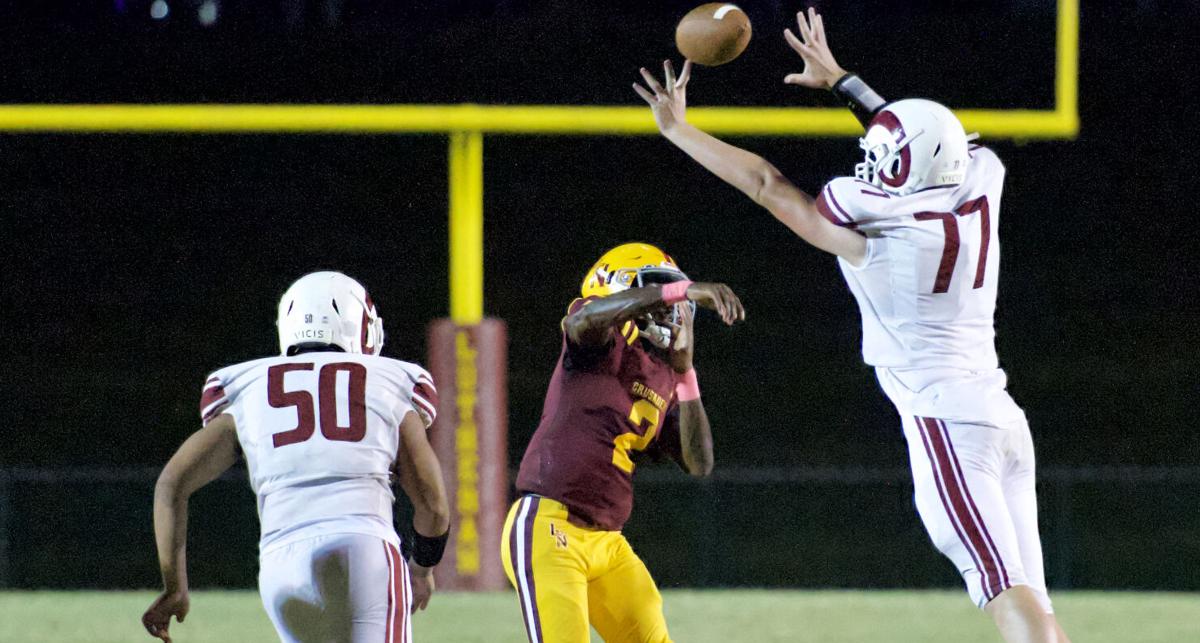 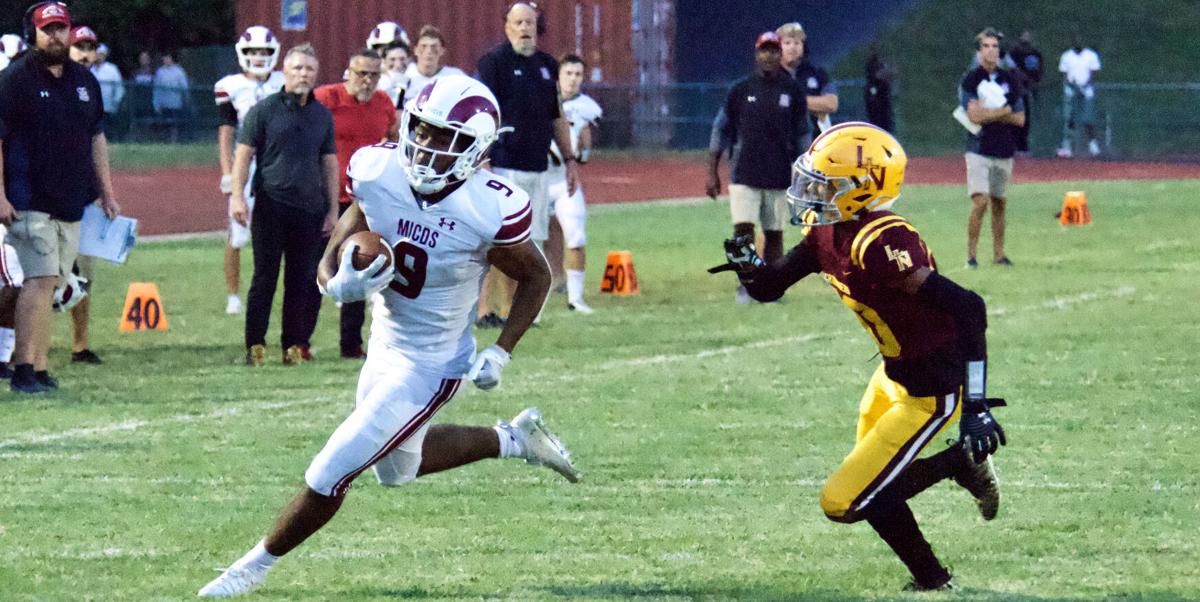 Winning football games and competing for championships has been a way of life at MICDS for decades.

This season is no different, as the Rams have raced to 6-0 record a year reaching the Class 4 state championship game. MICDS put itself in the driver’s seat for the Metro League championship with back-to-back victories over rivals John Burroughs and Lutheran North.

The Oct. 1 victory at Lutheran North saw the Rams break open a close game and win 56-37. Senior quarterback Reagan Andrew, a four-year starter, has passed for 1,201 yards and 14 touchdowns while rushing for 530 yards and nine more scores.

MICDS will host Lutheran South in a Metro League game at 1 p.m. Saturday.

-Senior Jared Rhodes of Ladue rushed for 223 yards on 24 carries and three touchdowns in a victory over Seckman.

-Running back John Clay of Brentwood rushed for 195 yards on 12 carries and five touchdowns in a victory over Principia.

-Quarterback Hasaan Cody of Jennings rushed for 187 yards on 12 carries and four touchdowns in a victory over Normandy.

-Receiver Kameron Gillespie of McCluer had three receptions for 138 yards and three touchdowns in a victory over Gateway STEM.

-Receiver ClayShaun Davis of Hazelwood Central had three receptions for 100 yards and two touchdowns in a victory over Hazelwood West.

-Quarterback Booker Simmons of Francis Howell completed 10 of 19 passes for 228 yards and two touchdowns in a loss to Wentzville Holt.

*On Tap This Weekend

Webster Groves girls’ basketball standout Eliza Maupin has given a commitment to Kansas State University this week. The 6’2” senior forward, a top prospect in the state of Missouri, is ranked No. 21 in the Class of 2022 by the recruiting website Prep Girls Hoops Missouri.

As a junior, Maupin averaged 12.3 points, 5.3 rebounds and 1.2 blocks while shooting 53 percent from the field. The Stateswomen gained a berth in the Class 6 state championship game. Maupin had 11 points and 12 rebounds in Webster’s upset victory over Springfield Kickapoo in the Class 6 state semifinals.

A multi-sport athlete, Maupin also excels in volleyball and track and field. She is a two-time state champion in the high jump and the school’s record holder in the long jump.

A pair of the area’s top fall basketball leagues will conclude Oct. 8-10 with playoff competition at Cardinal Ritter College Prep. The Rameybasketball Fall League playoffs will begin on Saturday with first round games in the morning and quarterfinal games in the evening. The semifinals are at noon and 1 p.m. Sunday with the championship game at 4 p.m.

The Sweet Hoops Girls Fall League will be holding their playoffs at 11 a.m. and noon Sunday and the championship game follows at 3 p.m. The league will hold its All-Star Game at 2 p.m. Saturday. All the games are at Lift for Life Academy.

Featured players in the All-Star game include sophomore standouts JaNyla Bush of Whitfield and Chantrel Clayton of Cardinal Ritter and seniors Zaire Harrell of MICDS and Taylor Brown of Lift for Life.