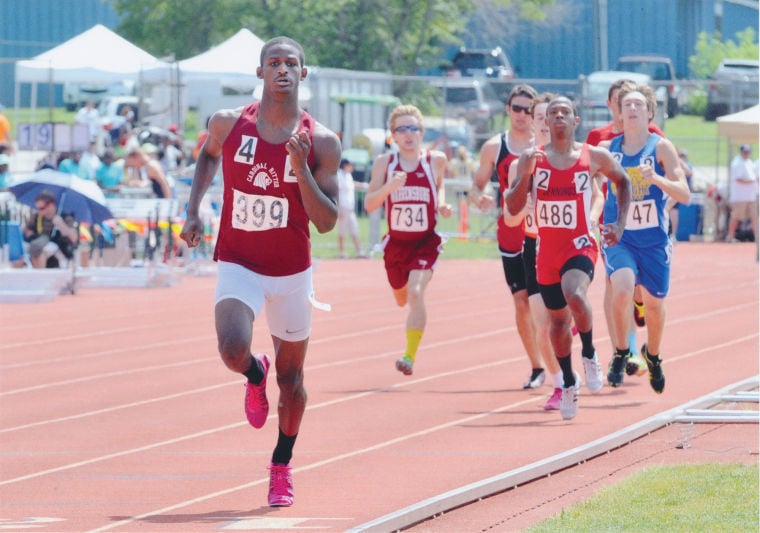 The temperatures were hot at last weekend’s Missouri Class 3-4 State Track and Field Championships in Jefferson City, but the action was even hotter.

State records and many top performances were the order of the weekend as the best in the Show-Me State put on a great show to close out the track and field season. Here are some of the highlights:

Cardinal Ritter’s Charles Jones closed out a spectacular career by winning the Class 3 400-meter dash and 800-meter run. He also anchored the Lions’ 4x400-meter relay to victory. Jones turned in times of 47.01 seconds in the 400, 1 minute 50.98 seconds in the 800 and a 46.8 second anchor leg to lead the Lions to victory in the 4x400. The multi-talented Jones will be headed to Texas Tech in the fall.

McCluer North’s girls won the school’s first ever state title when the Stars won the Class 4 state championship. The Stars scored 65 points to outdistance the competition. Junior Jasmine Barge was tremendous in winning four gold medals. Barge won the 100-meter high hurdles and the 300-meter low hurdles in a state record time of 41.79. Barge was also part of the state-champion 4x200 and 4x400-meter relay teams. The team of Barge, Miche-Ala Woods, Sydney Rogers and Rachel Culberson won the 4x200 in 1:40.2 and the 4x400 in a blistering 3:48.82 Culberson finished second in the 400 while Woods was seventh. Demetria Anderson was seventh in the 100-meter hurdles while the 4x100 team finished seventh.

Hazelwood Central’s Ashley Henderson was a repeat state champion in the 100- and 200-meter dash. Henderson turned in winning times of 11.86 in the 100 and 24.12 in the 200. She also anchored the Hawks to a state title in the 4x100. The Hawks finished third in the team standings.

CBC’s 4x400-meter relay team of Dominic Vaiana, Stephen Hickman, Jerrick Powell and Jarrod Pasley won the state title with a tremendous time of 3:14.98, which was just shy of the state record of 3:14.04, set by Hazelwood East in 1986.

Hazelwood Central’s 4x800 crew of Marcus Davis, Thedrick Daniels, Myles Cameron and Brandon Chunn finished first in 7:47.55, edging out Lafayette for the title. Chunn held off Lafayette’s Dylan Quisenberry, the open 800-meter state champion, at the end for the victory. Davis also won the 400 with a sparkling time of 47.07.

Best and next at shot put

Junior Jordan McClendon of John Burroughs won the Class 3 girls shot put with a throw of 43-8 ¾. She was also second in the shot put.