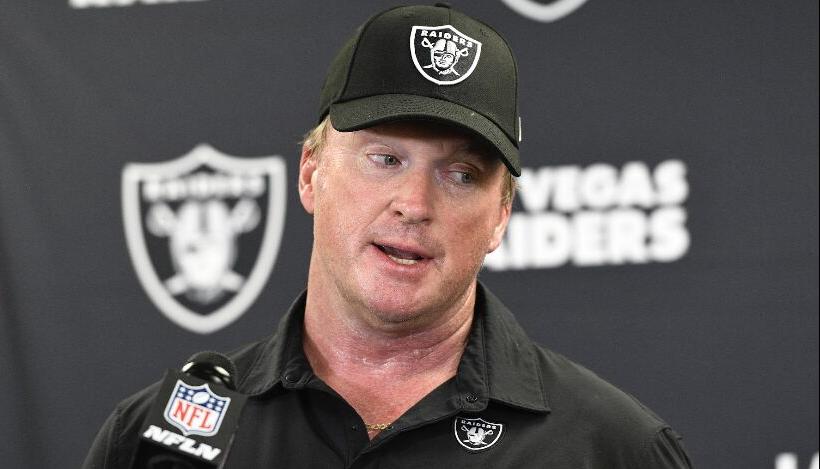 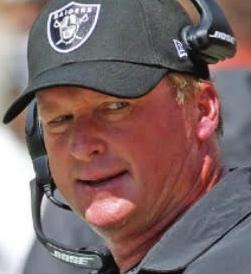 He repeatedly apologized for an email he shared with then-Washington Redskins executive Bruce Allen in 2011, in which he wrote of NFLPA Executive DeMaurice Smith, “Dumboriss Smith has lips the size of michelin tires.”  Gruden said he refers to people who don’t tell the truth as having rubber lips.

The emails have it all: the white male privilege, the homophobia; the misogynism; the disdain for people of color and women in high-level positions; the failure to realize a man can take a knee during a song and not be fired from his job.

The Wall Street Journal broke the racist email story earlier on Friday. Gruden had faced no action from the Raiders or the NFL by noon Sunday, Oct. 10. He coached his team’s lackluster 20-9 loss to the Chicago Bears.

“Is this racist, pompous jerk going to really slide? many of us were thinking.

Then, The New York Times reported late Monday afternoon, “Gruden had casually and frequently unleashed misogynistic and homophobic language over several years to denigrate people around the game and historic changes” in emails obtained by the newspaper.

Gruden and Raiders owner Mark Davis were aware of the emails and that they were going to be published. The NFL had provided them to the organization and both men.

I think the NFL wanted Gruden gone. I think it leaked the first email to the Journal. After Davis did nothing, Gruden told lie-after-lie, and coached on Sunday, a batch of emails went to the Times on Monday.

Less than five hours later, Gruden turned in his resignation and Davis accepted it.

The emails have it all: the white male privilege, the homophobia; the misogynism; the disdain for people of color and women in high-level positions; the failure to realize a man can take a knee during a song and not be fired from his job.

The saddest part of this entire saga is that Gruden will not be unemployed for long.

My guess is that FOX News has already contacted him about joining its team in 2022.

The NFL has more than 650,000 emails gleaned during its investigation into the then-Redskins’ office culture. The written conclusions of investigation and all pertinent emails should be released to the media…It’s clear how Gruden views the world of politics. The New York Times reported that he attacked former President Barack Obama and then-Vice-President Joe Biden. It printed the slur he used against Biden, but did not release specifics on Obama, other than he criticized Obama’s 2012 re-election campaign.…“He’s a BAD PERSON. I tried to tell people this when I played for this man!” retired former Tampa Bay receiver Keyshawn Johnson wrote on the website Mediaite. “But I was in the wrong. ‘Keyshawn’s just a spoiled brat.’ But here we are now, and stuff is coming to the surface…Dallas Cowboys owner Jerry Jones couldn’t bring himself to say Gruden should have been fired. “From the standpoint of contribution, I know we all are accountable to even a, if you will, fleeting or minor part of our actions. We all are accountable to those. That’s about all I want to comment on that.” Jerry, that is pitiful…Gruden insulted gay former Missouri Tigers star linebacker Michael Sam after he was drafted by the St. Louis Rams in 2014. Sam would ultimately fail to make the roster of none other than Jones’ Cowboys…The Raiders have the first openly gay player on a team regular season roster, defensive lineman Carl Nassib. Nassib said on Twitter the scandal “isn't surprising. If we dug through other (coaches') trash, it'd be interesting to see what we'd find."… Let’s talk irony. Gruden resigned and the story of his departure was reported during the ESPN Monday Night Football game on Oct. 11. Gruden served as color analyst on the broadcast from 2009-2017. Oct. 11 is National Coming Out Day…ESPN reported that following Gruden’s apology to the team there was “one Black player who gave him a hug and asked how he could help. I wonder how he feels today…Here’s what some columnists are writing: L.A. Times Sam Farmer “(the emails are) career-destroying bad, but how many more are beneath the surface? Which other NFL careers are on the line?” Nancy Armour, USA TODAY, “If this was bigotry bingo, Gruden would have had almost every square covered. His attitudes are disgusting, reprehensible and, considering Carl Nassib plays for the Raiders, terrifying.”…Tim Dahlberg, Associated Press, mocking Grudens’ ‘there isn’t an ounce of racism in me.’ “The targets were many. The shots were crude. The emails were exposed, and so was Gruden's real character. An ounce of racism? How about a cup of misogyny? Maybe a full pint of homophobia?”