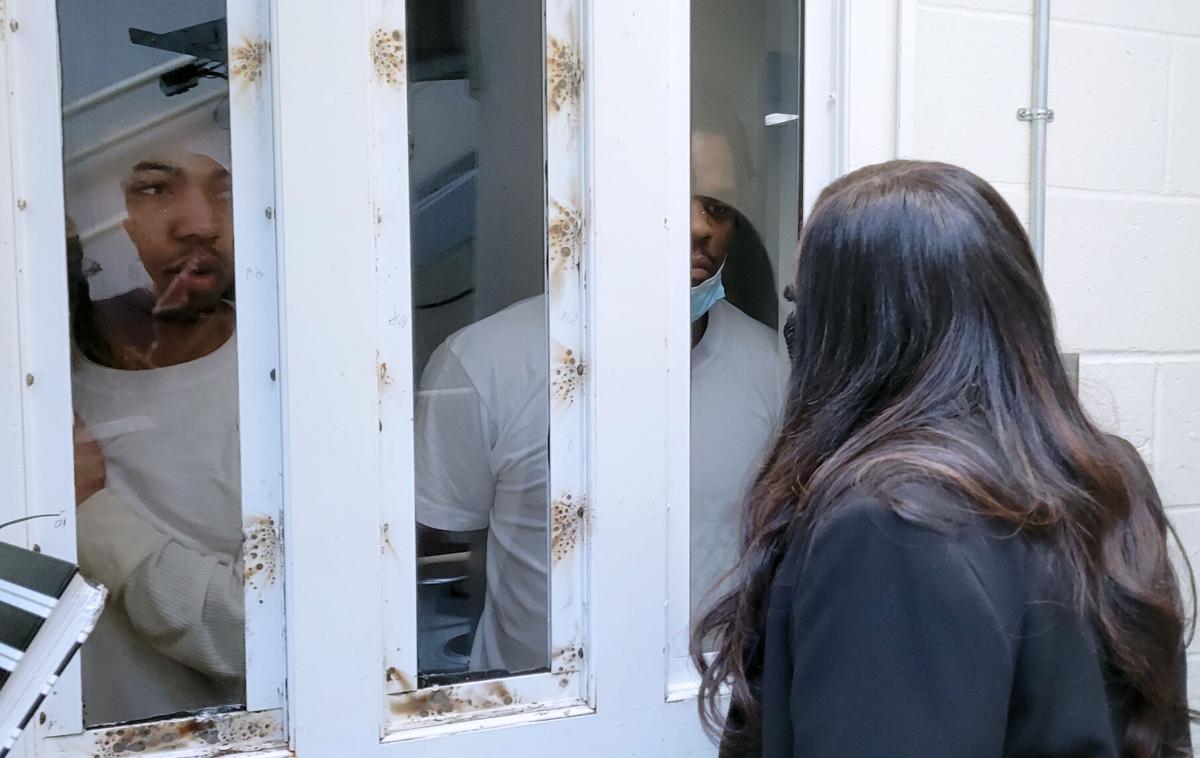 Congresswoman Cori Bush speaks with two inmates, one without a mask, during the April 24th tour of the Medium Security Institution. Inmates said they are given just two masks a week, there is an appalling disregard for COVID-19 safety protocols and there are many other inhumane conditions. 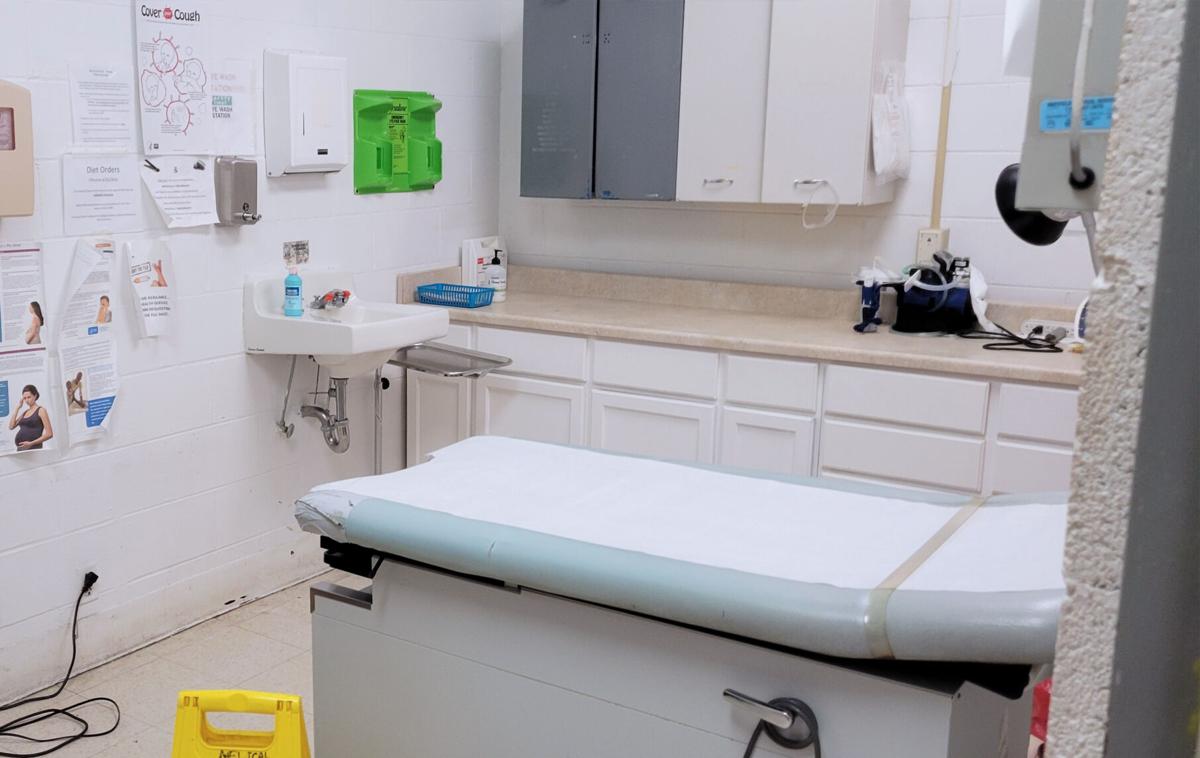 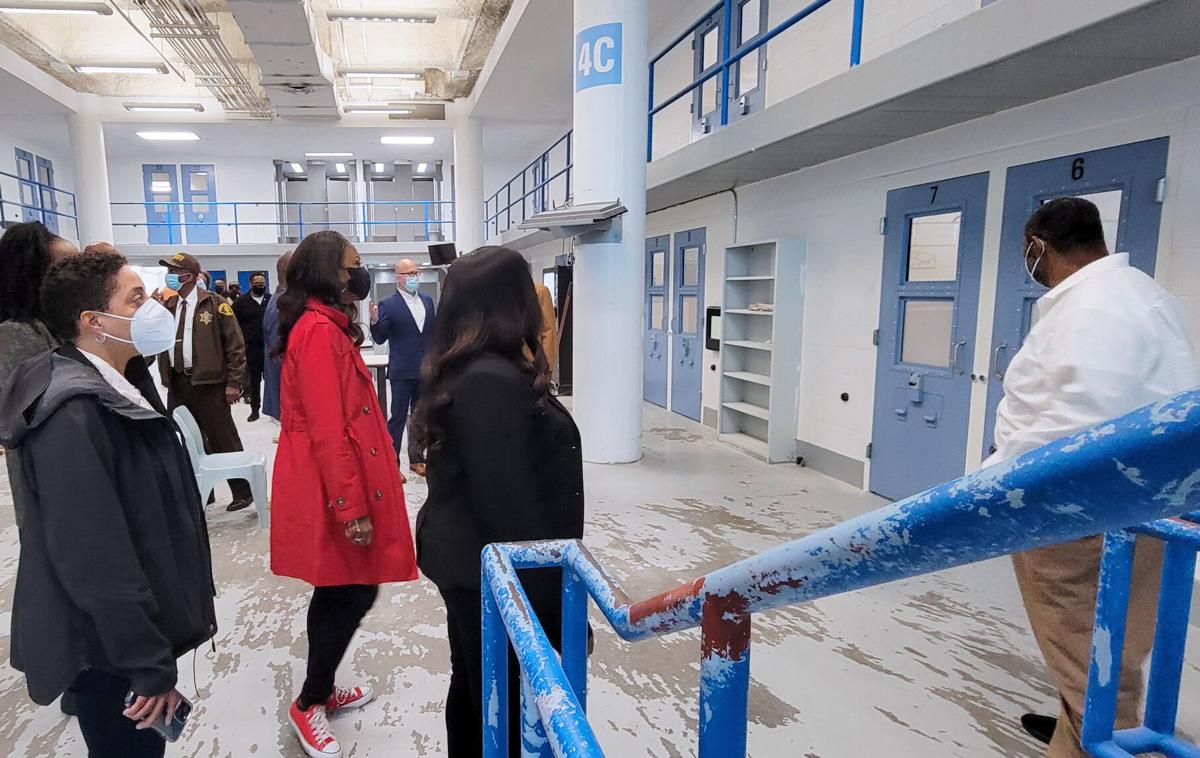 (L. to r.). St. Louis Circuit Attorney Kim Gardner, St. Louis Mayor Tishaura O. Jones and U.S. Rep Cori Bush (D-MO) joined forces with Kayla Reed, Executive Director of Action St. Louis and more community leaders to investigate the conditions for detainees in the Workhouse and City Justice Center.  Uprisings have erupted at the City Justice Center in response to delayed trials and inhumane living conditions according to many detainees and their families. 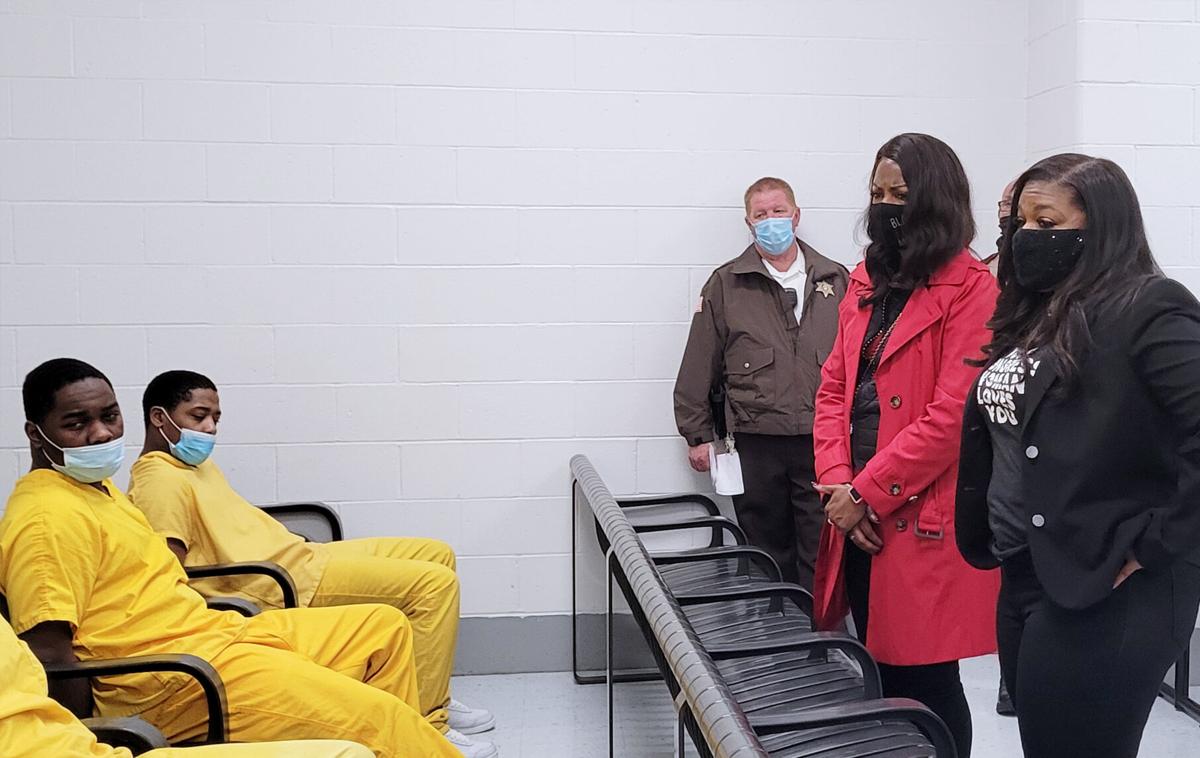 Mayor Tishaura O. Jones made this gripping statement after a visit to the city’s Workhouse and Justice Center last month. Uprisings have erupted there in response to delayed trials and inhumane living conditions, according to many detainees and their families. Detainees are also concerned about inadequate coronavirus precautions and protections.

Erika Wurst, a lawyer with the St. Louis Public Defender’s office, told the Washington Post in February that inmates have been “left in de facto solitary confinement and minded by jail staffers who do not maintain proper safety protocols.”

“Mayor Jones is committed to enforcing higher standards to keep the detainees in our care safe.” - Nick Dunne, public information officer for the Mayor’s office.

For the past year, ArchCity Defenders (ACD), a St Louis legal advocacy organization, has gathered testimonials from detainees, family members and prison workers. The agency created a hotline that the public can access through YouTube and other social media outlets.

Lack of COVID-19 care is a consistent complaint among many incarcerated individuals who shared their stories. A case manager in both the city jail and the workhouse, who resigned in July 2020, said facility administrators and employees are not taking appropriate actions to deal with the pandemic:

“They put me at risk when I was teaching a class. They have taken no steps,” the case manager said.

“I have never in my life seen such inhumane treatment.”

According to ACD, inmates fear having COVID-19 patients mixed in with the general population and a serious lack of personal protective equipment (PPE). A detainee who was in the city jail and the minimum-security workhouse, called conditions where inmates are housed “poor and unfair.”

“The jail and city officials..."

“The jail and city officials, city administrators have completely failed in their duty to protect people’s health and keep them safe.” Blake Strode, executive director of ArchCity Defenders

“They just throw people (with COVID-19) in the pod with us, and those who haven’t even been tested. I’ve never had symptoms and asked them to get me away from that pod,” the detainee said.

“They threaten us just for giving our opinion and it does nothing but frustrate the inmates.”

Marc Taylor, the father of Marc Taylor II, a City Justice Center detainee until he was relocated to the workhouse in January, told St. Louis American reporter Sophie Hurwitz his son is a father of three and a disabled veteran who is serving time for his first offense.

Taylor and his wife, Neva, said they are worried about their son’s physical and mental well-being because he had not received his needed medication, nor been able to speak with a mental health counselor since being moved to the workhouse.

At the time, documents uncovered by Al Jazeera showed that a COVID-positive detainee in St. Louis was held for two weeks before appropriate measures were taken to isolate him from the general population.

“The substandard care around COVID protocols was shocking and disappointing to the Mayor.” Nick Dunne, public information officer for the mayor’s office.

“We wanted access to see what’s actually happening so that we could actually make change for real people,” Rep. Bush said during a press event in front of the workhouse.

A week after the visit, Mayor Jones signed an executive order aimed at closing informational loopholes that kept operations at the facilities from the public eye.

Among other mandates, the order compels the Department of Corrections to submit all COVID-19 tests and cases in the jails.

“As you can imagine, the substandard care around COVID protocols was shocking and disappointing to the Mayor,” said Nick Dunne, Mayor Jones’ public information officer. “The detainees are only getting two masks per week, COVID testing is inconsistent, and detainees who tested negative were exposed to others who tested positive.”

Mayor Jones, Dunne said, is committed to enforcing “higher standards to keep the detainees in our care safe.” The information required by the executive order must be submitted by May 10 and will be reviewed by Jones' public safety director, Dan Isom, the Civilian Oversight Board and the city counselor's office.

On her first day in office, the mayor directed staff to cut all funding in the next city budget for the Medium Security Institution and reiterated her plan to remove all detainees from the jail within her first 100 days in office.

Describing the city’s penal institutions as built “for abuse, not accountability," Jones said she’s committed to rebuilding trust between communities, the police department and criminal justice institutions. City officials need to “lead with prevention and not with arrest and incarceration,” she added.

Jones, who made a campaign promise to close the workhouse, is following through on that pledge. The visit to the jails and her executive order mandating COVID care information is, as Mayor Jones phrased it; “the first step” in addressing healthcare conditions at the penal facilities and the detainee’s concerns.

why not use ivermectin and fluvoxamine? see: https://covid19criticalcare.com/wp-content/uploads/2020/11/FLCCC-Alliance-I-MASKplus-Protocol-ENGLISH.pdf