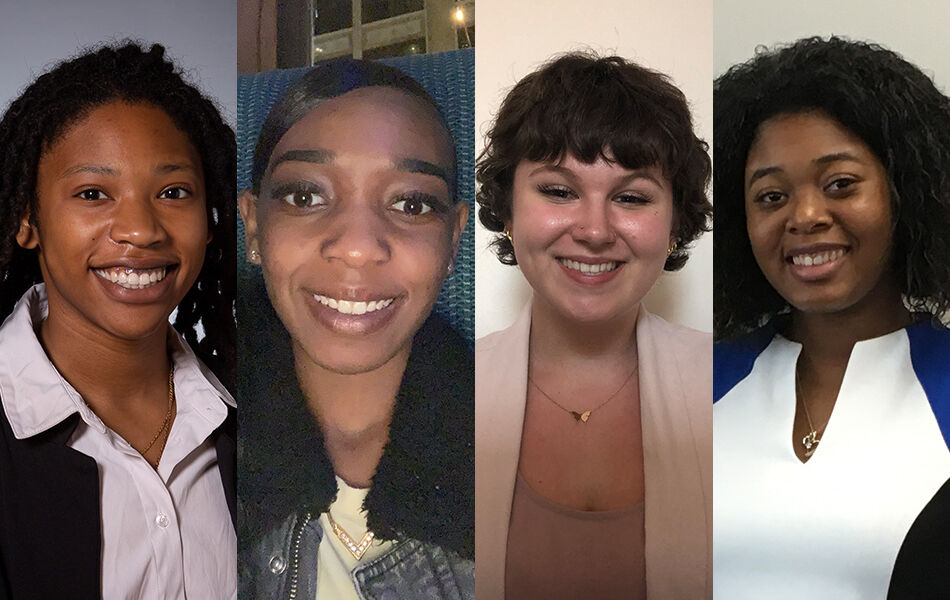 The coronavirus changed the world as we knew it.

Safety protocols, health policies, everyday practices and personal priorities shifted as the deadly pandemic seized the lives of thousands each day around the globe. Institutions including colleges and universities had to quickly adapt in an environment of ever-shifting unknowns.

In a combined essay titled, “The Realities of COVID-College,” four 22-year-old college students serving as Campus Policy Fellows with The Scholarship Foundation of St. Louis, wrote candidly about how the coronavirus exposed shortcomings on their respective campuses.

“I was sort of in an oasis. I was happy, at peace and didn’t have to worry about violence,” said Kennedi Harmon, a St. Louisan who just graduated from Hampton University.  She was eager to escape the chaos of her hometown and attend college in Virginia. Everything changed once the university sent students home.

“I was angry the second I got back to St. Louis. In one year, I lost so many people to either COVID or gun violence.”

Anne Marie Crane, a senior at Truman State University, had her life upended when her school shifted from in-person to virtual classes - then back to a hybrid of both. Early in the pandemic, students were ordered out of their dorms and sent home.

The decision created bedlam for international and low-income students, like Crane.

“They kept saying ‘we’ll keep you posted on when you can come back,’ but it was just so uncoordinated,” she said.

“It’s a 3-and-a-half-hour drive from Kirksville (Truman’s location) to St. Louis. It was a hassle trying to get back. I’m a low-income student. It was hard balancing my mental health, work and all the commitments I had at school. I was running on fumes and didn’t feel like I got recharged in the spring.”

The essay describes the “emotional and financial devastation” for college students who lost on-campus jobs. They addressed what they defined as “inconsistent and inadequate financial support.”

Colleges differed, they wrote, in how students were informed about the $2.2 trillion allocated by congress for the CARES Act Higher Education Emergency Relief Funding.

Institutions were “inconsistent” in how the funding was dispersed, the young writers claim. While some students easily qualified for funding, others had to jump through hoops to prove their level of financial hardship. Some were still denied.

The writers stressed how the inability to access or receive stimulus checks left some students, mostly low-income, without the ability to meet their “most basic needs.”

“They sent out emails saying funds were available, but you had to show proof in some type of way that you were struggling,” said Sabreyna Reese, a recent graduate from the University of Central Missouri.

“It’s sort of sad but this pandemic inspired a lot of us to get involved with these issues and use our voices.” - Anne Marie Crane, 22, a senior at Truman State University

“I wasn’t not sure how I was supposed to do that when I was struggling.”

Another point of contention is that some schools were ill-prepared “to provide meaningful education” during the pandemic.

“Instructors, professors, aides and staff who were not tech-savvy struggled to meet the demands of the new online learning experience,” they wrote.

“We encountered professors who treated students as if the world had not changed; piling on assignments, and enforcing strict attendance, grading, and other policies for online classes.”

“A lot of them didn’t even know how to use Zoom,” Jessika Cole, a senior at University of Missouri-St. Louis added. “It was difficult not being able to go to their offices and say ‘hey, I’m having this issue, can you help me?’ Everybody was put in the middle, and no one knew what to do.”

Contact tracing, safety measures and mental health services to alleviate the effects of the pandemic and existing widespread racism were severely lacking:

“Those who do not have health insurance, including low-income and first-generation college students, face a greater risk of not getting proper care with the detrimental effects of COVID,” the students wrote.

Faith Sandler, Scholarship Foundation executive director, said the treatise will be published through the agency’s media channels. They’re considering submitting it to other campus newspapers for maximum impact.

Since no one was prepared for a worldwide pandemic, the students were asked if it’s fair to publicly criticize the institutions they attend.

Poor management of the public health crisis increased student involvement in public affairs, they answered, adding that they’re grateful for the opportunity to speak out.

“We’re paying these institutions a lot of money,” Cole answered.

“A lot of things they think they knew, they didn’t, and this pandemic really woke students up to send a message.”

“It’s sort of sad but this pandemic inspired a lot of us to get involved with these issues and use our voices. That’s been an inspiration for me,” she said.

“I feel it’s my responsibility to advocate for those who can’t.”- Sabreyna Reese, 22, a recent graduate of the University of Central Missouri

The most important thing for Harmon was the opportunity to get institutions to really listen to student’s concerns and issues:

“A lot of issues we raise can be easily dismissed. Using social media and things like that has really helped us get this message out and hold our institutions accountable.”

Reese said she chose to speak up for future college students and those who didn’t or couldn’t return to school:

“I feel it’s my responsibility to advocate for those who can’t,” she said in hope of preparing schools for another health crisis.