On Friday, April 27, Heat-Up St. Louis will receive the 2018 Health Advocacy Organization of the Year award at the 18th Annual Salute to Excellence in Health Care Awards Luncheon at the Frontenac Hilton. Pictured: Heat-Up St. Louis volunteers at its Hardee's Rise 'N Shine for Heat fundraiser in February. 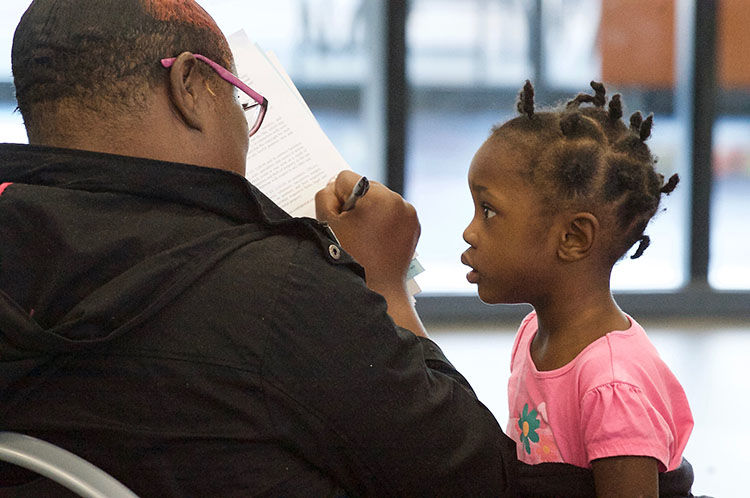 Martha, an 85-year-old North St. Louis County resident, relies on respiratory equipment to help her breathe at night. One winter her heating bill became unmanageable, and she faced disconnection.

After a nudge from her pastor, she reluctantly sought out help from Heat-Up St. Louis, a 100-percent volunteer non-profit corporation that helps seniors, disabled and low-income families with small children in 15 counties in Missouri and Illinois with their energy bills throughout the year.

Heat-Up St. Louis placed Martha on the senior registry with her utility company Spire, signed her up for budget billing, and stopped her disconnection by paying a $560 heating bill, working closely with the Community Action Agency of St. Louis County. Now her bills are manageable.

“Winter time can be worse for seniors,” said Dr. James Knight, a vascular surgeon and co-chair of the Public Health and Safety Committee for Heat-Up St. Louis and its summer program Cool Down St. Louis. “They can lose an extremity from being very cold. A lot of them have high blood pressure and diabetes. They shouldn’t be exposed to cold temperatures.”

Knight, who also is vice chairman of the charity’s Board of Directors, has led its health education and outreach efforts for 15 years.

“This is one board I belong on that we do things,” Knight said. “We really help people. We don’t just talk about it.”

On Friday, April 27, Heat-Up St. Louis will receive the 2018 Health Advocacy Organization of the Year award at the 18th Annual Salute to Excellence in Health Care Awards Luncheon at the Frontenac Hilton. Net proceeds from the event support the St. Louis American Foundation, which fostered more than $750,000 in community grants and scholarships for area youth in 2017.

Heat-Up St. Louis was founded in June 2000 by public relations strategist and Emmy Award-winning producer and director Gentry W. Trotter. At the time, Trotter was responsible for community outreach and fundraising for a utility-sponsored energy-assistance program, working with a natural gas company that he had served as a consultant for public relations for 24 years. He and several other community-minded volunteers decided to create a regional approach.

“We were looking for something more massive that could speak to the needs of the public’s interest,” Trotter said.

Since its inception, the effort has impacted more than 380,000 lives, he said. Aside from assisting residents with their utility bills, the effort also educates the community on the importance of keeping their heat and air conditioning for health reasons. It also makes sure that the community is aware of safety concerns.

“The tireless efforts of this organization are saving lives,” said St. Louis Fire Chief Dennis M. Jenkerson, co-chair of Public Safety and Health Committee. “Over the past 10 years, I have witnessed the number of fire deaths during the cold winter months decline every year as a result of the efforts of Heat-Up St. Louis.”

The Fire Department also help to install new and slightly used air conditioners in area homes, working with the charity.

Its 62-member board includes members of utility companies, partnering community and civic organizations, and almost every CEO of local media outlets. Ameren is the largest donor to Heat Up. This consortium working together is what drives the organization’s success, Trotter said. The charity also acts as a regional safety net when funding from the government and utility-charity programs falls short.

“There are times during the year when it’s just Heat-Up St. Louis funds,” Trotter said. “That’s it.”

Getting the public involved is an important piece, which has hosted fundraisers like the Hardee’s Rise ‘N Shine For Heat and Rams Gift of Warmth, he said.

Heat-Up St. Louis partners throughout the year with Ameren and Ameren Missouri. The utilities also cosponsor the annual Winterizing Utility Forum, which provides financial literacy counseling, safety tips, budget billing and utility assistance, so hundreds of needy households can face lower or no heating bills each winter. Cool Down St. Louis, along with Vatterott College and Ameren, also operates the largest distributions of new energy efficient A/Cs, than any other charity in its Missouri and Illinois service areas.

Michael P. McMillan, president and CEO of the Urban League of Metropolitan St. Louis, is a member of the charity’s executive board.

“There’s no doubt that Heat-Up St. Louis and its summer efforts are at the forefront of saving lives, by helping area needy residents with new A/Cs, utility assistance, and education,” said McMillan. “If not for Heat-Up or Cool Down St. Louis, our Urban League operations in St. Louis and St. Clair counties wouldn’t have that much-needed safety net. That’s where primary resources like Heat-Up and Cool Down have become lifesavers.”

Tickets for the 18th Annual Salute to Excellence in Health Care Awards Luncheon on Friday, April 27 at the Frontenac Hilton are $750 per table for VIP/Corporate seating and $50 each/$500 table for Individual seating. To order tickets, call 314-533-8000 or visit www.stlamerican.com.