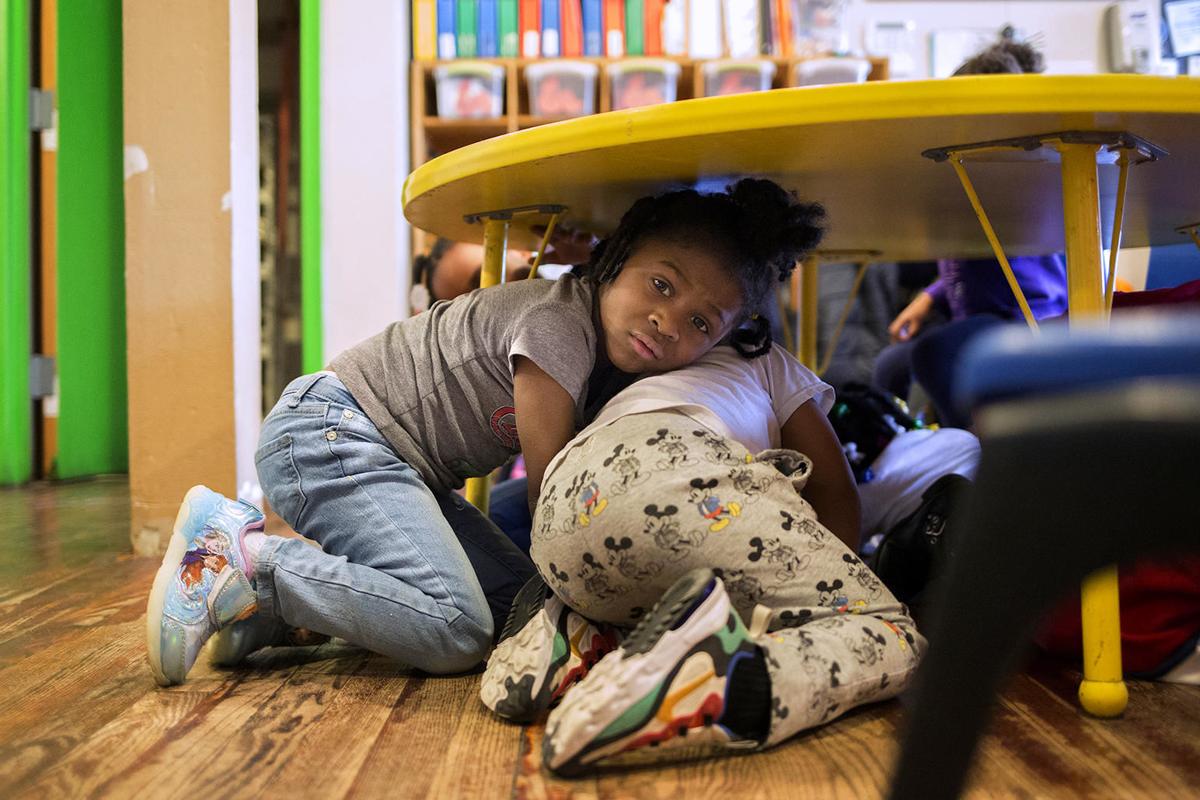 Justice Buress, 4, demonstrates how she hides under a table during a drill at Little Explorers Learning Center in St. Louis. Day care director Tess Trice carries out monthly drills to train the children to get on the floor when they hear gunfire. 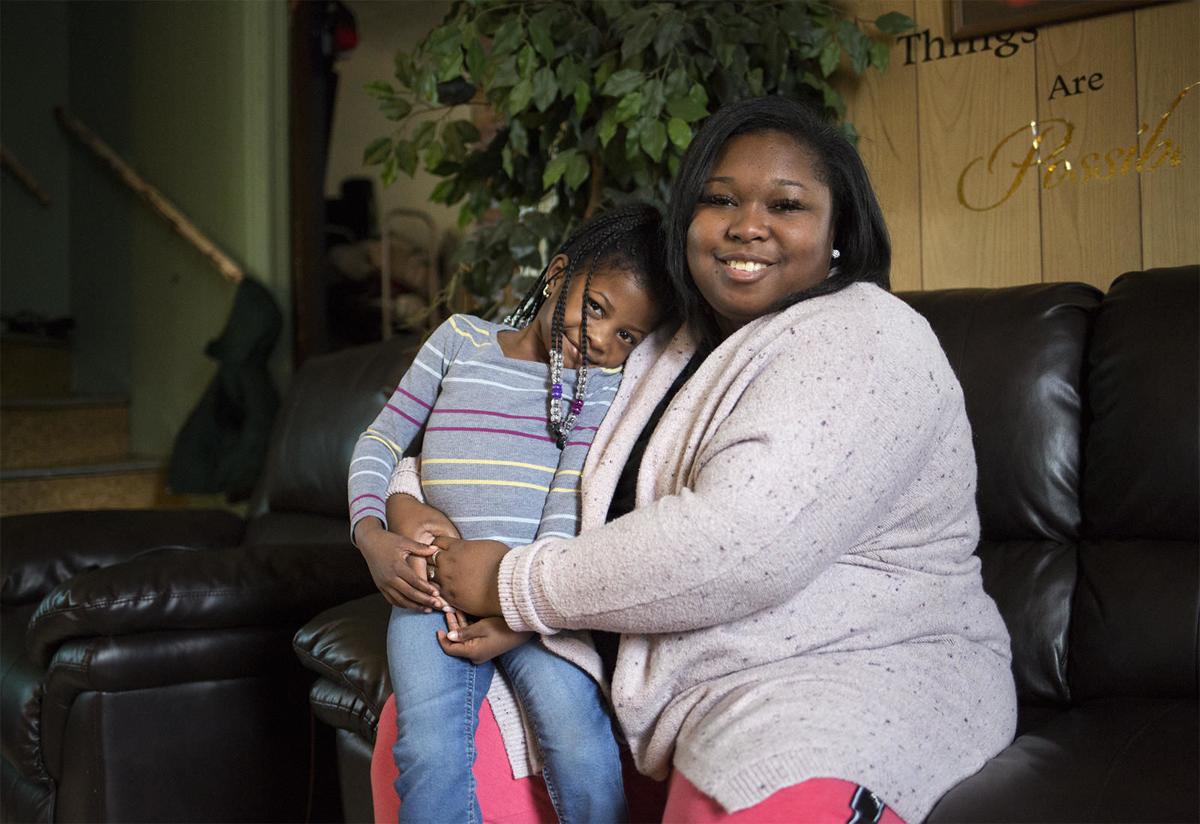 Satin White poses for a portrait with her 5-year-old daughter, Amor Robinson on Feb. 15, 2020. The girl already knows about gunfire. 'I don't like the pop, pop noises,' she says.

Justice Buress, 4, demonstrates how she hides under a table during a drill at Little Explorers Learning Center in St. Louis. Day care director Tess Trice carries out monthly drills to train the children to get on the floor when they hear gunfire.

Satin White poses for a portrait with her 5-year-old daughter, Amor Robinson on Feb. 15, 2020. The girl already knows about gunfire. 'I don't like the pop, pop noises,' she says.

Champale Greene-Anderson keeps the volume up on her television whenever her 5-year-old granddaughter Amor Robinson comes over after school.

“So we won’t hear the gunshots,” Greene-Anderson said. “I have little bitty grandbabies, and I don’t want them to be afraid to be here.”

As a preschooler, Amor already knows and fears the sounds that occur with regularity in their neighborhood.

“I don’t like the pop, pop noises,” Amor said, swinging the beads in her hair. “I can’t hear my tablet when I watch something.”

And when the television or her hot-pink headphones and matching tablet can’t mask the noise of a shooting? “She usually stops everything,” said her mother, Satin White. “Sometimes she cries, sometimes she covers her ears.”

Her grandmother has even watched Amor hide inside a narrow gap between the couch and recliner.

In communities across the country dealing with ever-present violence, children like Amor continually search for safety, peace and a quiet place. More than two dozen parents and caregivers who spoke with Kaiser Health News attested that the kids hide underneath beds, in basements and dry bathtubs, waiting for gunfire to stop while their parents pray that a bullet never finds them.

In St. Louis, which has the nation’s highest murder rate among cities with at least 100,000 people, the reasons are especially stark. More than 20 children in the St. Louis area were killed by gunfire last year, and in the first two months of this year, more than a dozen children were shot. At least four of them died.

Now every time police tape goes up in a neighborhood, it’s a hurtful reminder that adults have to find ways to keep children safe. And while parents hope their kids grow into healthy adults, evidence shows that children who grow up around violence or witness it frequently are more likely to have health problems later in life.

St. Louis mental health expert Lekesha Davis said children and their parents can become desensitized to the violence around them — where even one’s home doesn’t feel safe. And, research shows, black parents and children in this country, especially, often cannot get the mental health treatment they may need.

“Can you imagine as a child, you are sleeping, you know, no care in the world as you sleep, and being jarred out of your sleep to get under the bed and hide?” Davis said.

“We have to look at this, not just, you know, emotionally, but what does that do to our body? Our brain is impacted by this fight-or-flight response. That's supposed to happen in rare instances, but when you're having them happen every single day, you're having these chemicals released in the brain on a daily basis. How does that affect you as you get older?”

Brand nods, giving her approval. After they sing a song, it’s time for a different kind of drill. Brand tells the children to get ready. Then, she shouts: “Dora the Explorer.”

“Dora” is a code word, Brand explained, signaling the kids to drop to the floor — the safest place — in case gunfire erupts nearby.

During the drill that morning, most of the children get down. Others walk around, sending Brand on a chase as she tries to corral the group of 3- to 5-year-olds.

The drill may sound playful, but sometimes the danger is real.

The Little Explorers protocol isn’t like the “active shooter” drills taking place in schools around the country on the rare chance someone comes inside to shoot like in Columbine, Parkland or Sandy Hook. The day care performs these drills because nearby shootings are an ongoing threat.

Day care director Tess Trice said a bullet pierced the window in November while the children were inside. Then, the very next day, bullets flew again.

“We heard gunshots, we got on the floor,” Trice said. “Eventually, when we got up and looked out the window, we saw a body out there.”

Trice called parents that day to see if they wanted to pick up their children early. Nicollette Mayo was one of the parents who received a call from the teachers. She knows the neighborhood faces challenges but can’t see her 4-year-old daughter, Justice, and infant son, Marquis, going anywhere else.

“I trust them,” Mayo said. “And I know that, God forbid, if there is an incident that I'm going to be contacted immediately. They're gonna do what they need to do to keep my children safe.”

Trice considered bulletproof glass for the day care but could not afford it. A local company estimated it would cost $8,000 to $10,000 per window. So she relies on the “Dora” drills and newly installed cameras.

But in a city with such an alarming homicide rate, such drills aren’t happening only at day cares and schools. They also happen at home.

‘You live better if you sit on the floor’

At a home across the river in East St. Louis, the Hicks family hides in the dark and in silence. The goal is to keep the family out of sight, because bearing witness to a shooting could put them at a different kind of risk, mom Kianna Hicks said.

So when trouble erupts, they do their best to remain unseen and unheard.

“We turn the TV down,” said 13-year-old Anajah Hicks, the oldest of four. “We turn the lights off, and we hurry up and get down on the ground.”

A few times each month, the family practices what to do when they hear gunshots. Hicks tells the kids to get ready. Then, their grandmother Gloria Hicks claps her hands to simulate the sound of gunfire.

“I need them to know exactly what to do, because in too many instances, where we've been sitting around, and gunshots, you know, people start shooting, and they'll just be up walking around or trying to run,” Kianna Hicks said.

“I'll tell ’em, ‘Naw, that's not what you do. You hear gunshots, you hear gunshots. No matter where you at, you stop, you get on the ground, and you wait until it's over with and then you move around.’”

At least twice a week when the weather is warm, the family gets on the floor in response to real gunfire. Other families in tough neighborhoods sit on the floor more often, even amid moments of relative quiet.

The first time Gloria Hicks saw a family sitting on the floor, she was visiting her godson in Chicago decades ago. It was hot that summer, Hicks recalled, so families kept their apartment doors open to stay cool.

“They were sitting on the floor watching TV, and I wondered, 'Why is it like that?'” Hicks recalled. “Then I learned that you live better if you sit on the floor than on the couch, because you don’t know when the bullets gon’ fly.”

Although 16-year-old Mariah knows what to do when bullets fly, she said, she still has a difficult time processing the sound of violence. The honor student was babysitting her little cousins at her St. Louis home last winter when she heard gunshots.

“It couldn't have been no further than, like, my doorstep,” recalled Mariah, whose mother asked the teen’s last name not be printed so the discussion of the trauma doesn’t follow her into adulthood. “I immediately dropped to the floor, and then in a split second the second thing that ran through my head is like, ‘Oh, my God, the kids.’”

When she walked into the next room, she saw her two younger cousins on the floor doing exactly what their mother taught them to do when gunfire erupts: Get down and don’t move.

The three kids walked away physically OK that day. But later that night, Mariah said she pulled out strands of her hair, a behavior associated with stress.

“Pulling my hair got really bad,” she said. “I had to oil my hair again because when I oil it, it makes it hard to pull out.”

Davis, the mental health counselor who has worked for 20 years with children experiencing trauma, encourages parents to comfort their kids after a traumatic event and for the kids to fully explore and discuss their emotions even if it’s months after the fact.

She said getting on the floor explains only how families are maintaining their physical safety.

“But no one's addressing the emotional and the mental toll that this takes on individuals,” said Davis, vice president of the Hopewell Center, one of the few mental health agencies for kids in the city of St. Louis.

“We get children that were playing in their backyard and they witnessed someone being shot right in front of them,” Davis said. “These are the daily experiences of our children. And that's not normal.”

Kaiser Health News is a nonprofit news service covering health issues. It is an editorially independent program of the Kaiser Family Foundation that is not affiliated with Kaiser Permanente.