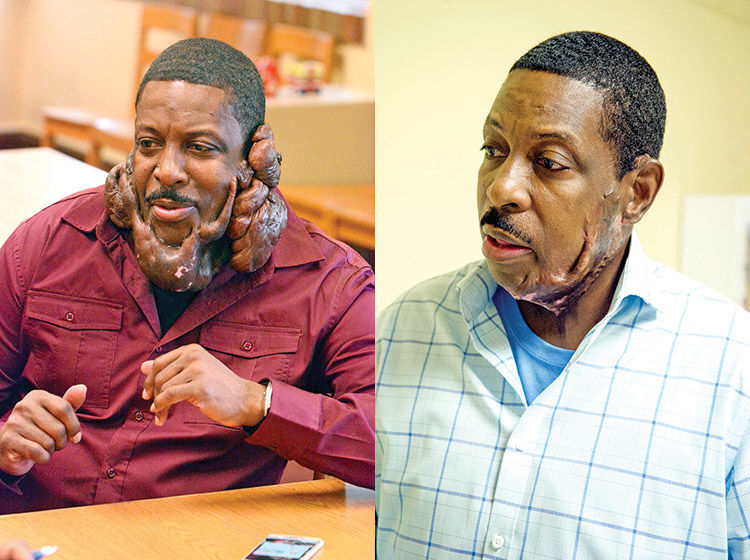 Although there is still work to do, two surgeries to remove keloids by a noted New York surgeon produced encouraging results for Roosevelt High School teacher Tony Perkins of St. Louis. 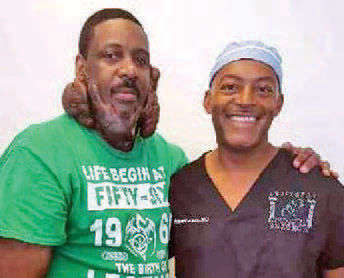 “I don’t know how much is going to be done at what particular time,” he said. “I am very satisfied with how the surgeries are going. It seems to be going pretty well.”

It was almost a year ago when The American first spoke with Perkins about his painful and disfiguring condition. Keloids are an overgrowth of scar tissue, which can be lumpy, raised and discolored, that are larger than the originally wound. They are usually the result of a skin-penetrating injury, such as cuts, surgical incisions, burns, piercings or even tattoos. They can take weeks or months to appear and can grow larger over time. They occur in about 10 percent of people, according to the American Osteopathic College of Dermatology. The American Academy of Dermatology says persons of African, Asian or Hispanic descent are more prone to keloids.

After a number of unsuccessful surgeries over the years, Perkins found a surgeon, an African-American physician, who he felt could remove the keloids permanently and return his face, upper body, torso and back to normal. Perkins’ first surgery with this physician – Dr. Michael Jones, a cosmetic and reconstructive surgeon who has offices in Atlanta and in New York – was in March 2017, followed by a second surgery in October 2017.

“I believe it is taken care of this time,” Perkins said. “In recent years, I could tell maybe within a few months that it was coming back and, right now, I see no signs of it.”

He launched a GoFundMe campaign last year prior to his first surgery for the keloid removal, which was not covered by his health insurance. Although the fundraiser has a way to go before meeting its $40,000 goal, Perkins and the surgeries are moving forward.

What few photos Perkins would post or was tagged in on social media have shown improvement, though the lower part of his face and chin typically were bandaged, which is part of the process.

“When they treat it with the radiation, it’s killing the cells in the keloid,” Perkins said. The bandages kept the area clean and drained as it healed.

Last spring, while on a follow-up visit, Perkins said his doctor invited him to an event for his reality TV series “We Are the Joneses” on the BET network.

Back in St. Louis, the surgeries reveal an outer appearance that matches the inner man that those who know Perkins have always seen.

“Now when I look in the mirror, I see – basically, the old me,” Perkins said.

After shying away from cameras and photos for so long, Perkins is taking more pictures.

“As far as my confidence level, it really wasn’t bad,” he said, “but it’s a little better than what it was.”

Perkins’ battle with keloids helped the popular Roosevelt High School teacher show students that they too can excel despite obstacles to overcome.

His students share his excitement. One of them, Tayla Mosley, said, “I think it was good. He looks better now and I think he is fine with his surgery.”

This is very good news. [smile][beam]