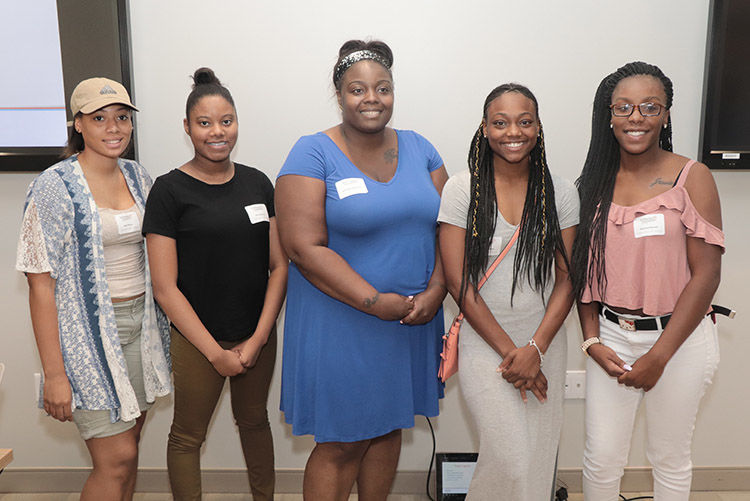 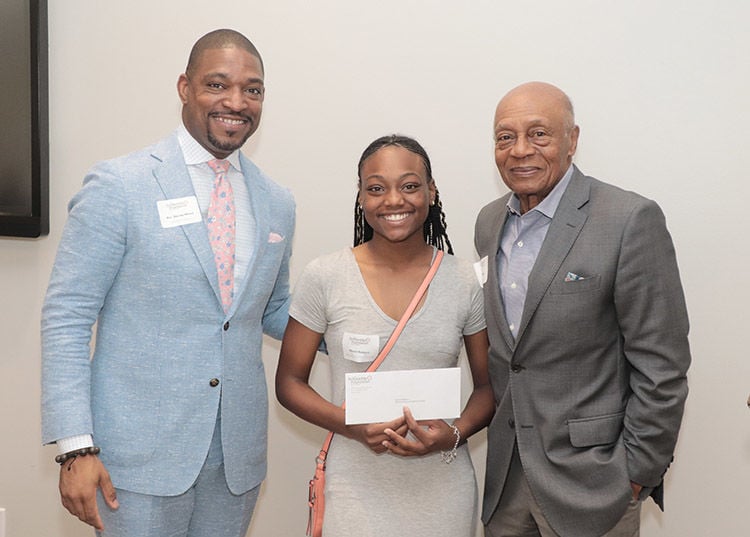 The annual ceremony awarding Deaconess Nursing Scholarships was reformatted this year, with great relevance. You could say it allowed new nursing students to stay woke to what lies ahead during their studies.

The message, in short, was: Nursing studies not easy, regardless of where you attend school; peers may downplay your knowledge and abilities or act as though you do not exist; the support you need from some teachers may not manifest; and yet you must stay focused, stay encouraged, and stay in St. Louis.

Abbigail Franken, who did not attend the ceremony, also received a scholarship.

During the welcome ceremony, Karissa Anderson, Advocacy manager at Deaconess, gave the students a brief overview of the history of the three entities in the partnership, starting with the Deaconess sisters’ nursing work in St. Louis that began in the 1800s, to address disparities in who received care. That work led to the forming of Deaconess Hospital and then, after it closed, the Deaconess Foundation. The Scholarship Foundation of St. Louis was founded in 1920 to address the disparity in access to higher education. The St. Louis American was first published in 1928 to give a voice to blacks in the St. Louis area and has been continuously published ever since. The St. Louis American Foundation was founded in 1994 to enable the African-American community to increase its access to careers in business, science and the humanities.

Of the partnership, Anderson said, “It’s really a tribute to the legacy of nurses, nursing and healing in the St. Louis region, because, as we know, health and healing is important to thriving communities.”

Since the start of this educational opportunity, 45 nursing scholars have received just over $1 million in scholarship grants and interest-free loans. Additionally, a five-year commitment by the Deaconess Foundation will also allow The Scholarship Foundation to offer paid advocacy internships for Deaconess nursing scholars.

The new student nurses found out what nursing school was really like from two previous scholars and one graduating scholar: Sharniqua Holland, Shelby Marshall and Brittany Ferrell.

Ferrell works as a high-risk obstetrics nurse at an SSM hospital. She graduated a few years ago from the College of Nursing at the University of Missouri-St. Louis. She said her biggest challenge was being a nontraditional student.

“When I started nursing school, I had a 2-year-old at the time and the program is just not built for nontraditional students,” Ferrell said. “I was a single mother, and I worked two or three part-time jobs, and it made it quite challenging because the program is hard, and their grading scale is not like the grading scale for the rest of the university.”

Marshall graduates next month and already has a job lined up as a cardiac stepdown nurse at Vanderbilt Medical Center in Nashville. She said being the first in her family to attend college presented its own unique challenges – like trying to make friends, getting involved and developing a support system.

“I didn’t have older siblings, parents or anyone to guide me through the college experience,” Marshall said.

“I had a period of time when I did not pass a class, and I thought it would be the end of the world and honestly you just have to be able to reach out and ask for help when you need it. That was something I struggled with, because I would do assignments and any and everything by myself growing up. But there is tutoring, mentors, all kinds of people in the school of nursing wherever you go.”

Holland graduated from Goldfarb School of Nursing and works at Mercy Hospital in the cardiovascular ICU. She talked about isolation, lack of support from teachers, and dismissive attitudes and behaviors from white nursing students at the school she attended. Fortunately, her husband, who was also a nursing student, provided support, along with friends, family and the Scholarship Foundation.

“The hardest thing was not having anyone that looked like me – other than my husband,” Holland said. “I don’t think a lot of people realize or acknowledge that struggle – but it is one. As an African American and, then, as a female, I kind of felt like a minority of minorities. In a lot of ways, I felt like the only one of ‘me.’”

Donald M. Suggs, president of the St. Louis American Foundation and a retired oral surgeon, understood the sentiment. Suggs told the scholars he was one of two black students in his dental school in Indiana, when educational opportunities were limited for black students.

“My own experience is very much like what you describe,” Suggs said. He encouraged the students to stick with nursing and to stay in St. Louis.

“We are honored and humbled to be a part of this effort to assist people who are interested in embarking on what is one of the really noble professions,” Suggs said. “It comes out of a tradition of service to the community. I hope you will continue to maintain the kind of commitment, the kind of dedication, and the kind of empathy that I sense coming from you today. I just want you to know how much I respect what you are doing, and just keep up the good work.”

Despite the rigors of nursing school, there is fulfillment after graduation. Ferrell and Holland both love their jobs – and what they are able to do to help others heal.

“I think the most rewarding thing for me is just hearing how much our care means to my patients,” Holland said.

“Whether it’s me using my best nursing judgement or whether this needs to be a culturally safe connection to be able to speak to some of the experiences that might exist outside of them being in the hospital,” Ferrell said. “I’m in this space, I’m in these spaces for a reason, and I am committed to being in these spaces because there is just not enough of us there.”