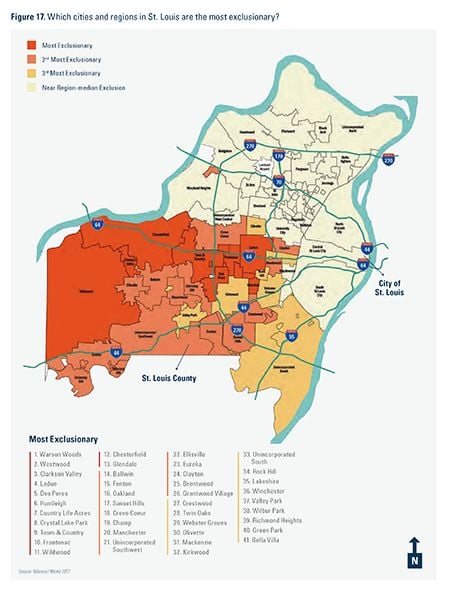 The community report “Segregation in St. Louis: Dismantling the Divide” presented an Index of Exclusivity ranking the 41 cities and areas in our region where it is most difficult for African Americans and/or low-income people to find housing. According to the report, many of these 41 exclusive areas rank high on school performance and access to employment, retail, healthy foods, and primary physician care. Historically, these mostly white neighborhoods were created through systemic governmental policies designed to keep low-income people and African Americans from buying or renting homes in them. 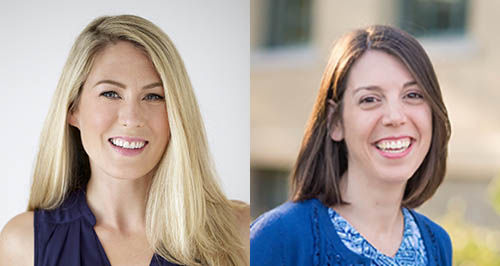 St. Louis is truly a tale of two cities. Neighborhoods of high crime and high poverty eerily exist in a region that also contains communities with family-friendly attractions, beautiful housing, and good schools. This divide is well-known and historically accepted in our region.

It is this contrast that we tend to focus on most when we talk about segregation. And we should. It’s real. It’s startling. It’s damaging to our region and the people who live here.

This reality alone should be enough to muster the political will to change it. But it's not. And that has everything to do with the shadow of racial bias in the city of abundance. This shadow blinds people from seeing a national and local history of policy advantages that got them inside this bubble. It makes them complicit in policies and ways of life that put this region among the 10 most segregated in the country.

We are writing from this bubble to let you know this complicity can no longer stand. It’s costing us. It’s isolating us. And it’s eating away at us from inside the bubble.

Part of the work we do as a We Stories community is to recognize all the ways systemic racism has shaped the history and landscape of our region. In less than three years we’ve engaged more than 700 families across 74 ZIP codes. We study together the formation of our tale of two cities. We also explore and attempt to take responsibility for how readily and predictably we, as white families, repeat this pattern – even among those of us that reportedly value racial diversity.

When we asked some of our white families what it feels like to live in St. Louis, they replied with responses that in no way reflected the often repeated phrase, “It’s a great place to raise a family.” Instead, they said things like: isolating, embarrassing, depressing, overwhelming. I feel guilty. I’ve become numb. This level of segregation has begun to seem normal.

This is the deeply emotional shadow of living inside the bubble.

The recent report “Segregation in St. Louis: Dismantling the Divide” revealed the full scope of our history of intentional segregation through federal, state, and local policy. Through personal interviews, the report also revealed a level of frustration and shame among whites living in this bubble. They find themselves grappling with their family’s own complicated history of white flight. They are expected to not even speak about race and privilege inside the bubble.

Whites are truly dealing with the cost of walling themselves off into isolated communities unwilling to make room for difference. This disconnection stems from not knowing and sharing life with a significant portion of our region. Indeed, the extra effort that must be invested to experience any level of diversity is actually measurable by mile markers.

Make no mistake, life within the bubble has benefits: appreciating home values; schools labeled “good;” and municipalities sustained by property tax values instead of court fees and traffic fines. We carry the social clout of our geography.

But it’s a mistake to overlook the deficits of living in exclusivity. If we don’t talk about this shadow, it allows a damaging myth to flourish: that segregation is working for us white folks.

We can trick ourselves into thinking that inequity and pain and destruction is actually in our own self-interest. It is not. And, if we as a region are to dismantle the divide, we must collectively challenge this myth and the patterns that maintain it.

The “Dismantling the Divide” report contained a compelling Index of Exclusivity, a regional map that used data points to quantify its 41 most exclusionary cities and areas. It is very difficult for African American and/or low-income families to find housing in these places.

The report shares the tragic history of the creation of these exclusionary suburbs. But that history alone doesn’t explain why the bubbles remain. Do people of means choose to live in them because they are exclusionary? Sometimes. But our families tell us their housing choices were driven by perceived convenience rather than a desire to live apart from black and brown people. We often hear about selection criteria including “good schools” (even when it’s understood how poorly that is measured), closet space, yard sizes and garages.

The families we work with report wanting diversity while house hunting. But it loses out to other concerns. It is not until they experience the whiteness of their schools and community spaces that the cost of this trade-off becomes real … and begins to hurt.

It takes work to pierce these bubbles. But in our experience, each time we have, we have found people eager to join us. Together we are committed to dismantling the divide. One of the report’s authors, For the Sake of All Director Jason Purnell suggests “redrawing the boundaries of opportunity.”  We must. Our collective future depends on it.

We are now hundreds, if not thousands, strong. But it will take even more of us to make real change, and we invite you to join us.

Adelaide Lancaster and Laura Horwitz are co-founders of We Stories, an organization that helps white families start and strengthen conversations about racism and organize in support of racial justice efforts.

It’s time to dismantle TIFs as tool of segregation

In the words of my Washington University colleague Jason Purnell, Saint Louis has been a true “innovator” when it comes to segregation. Purnel…

So, do the authors live in integrated neighborhoods? Do they send their kids to integrated schools?

The Gift of Glasses