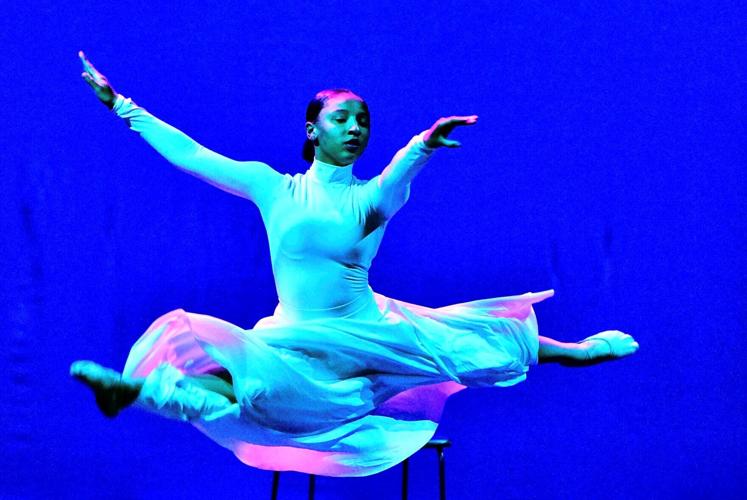 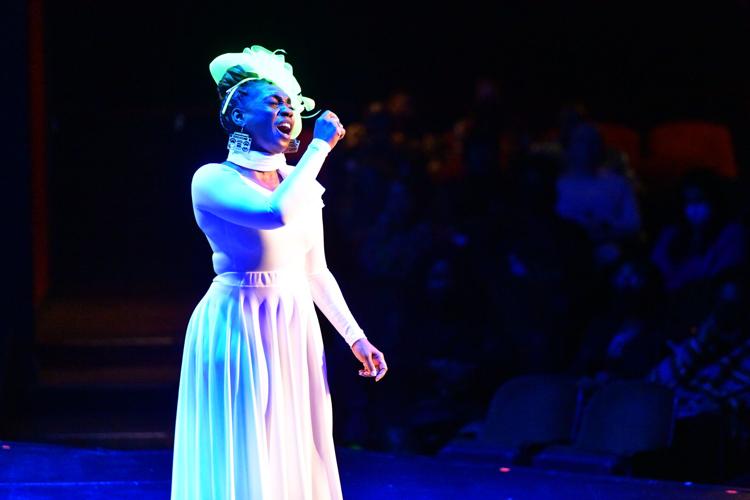 Leah Stewart performs the works of St. Louis poet Shirley Bradley Price LeFlore. during the Rivers of Women production at the Grandel Square Theatre Fri. May 6, 2022. 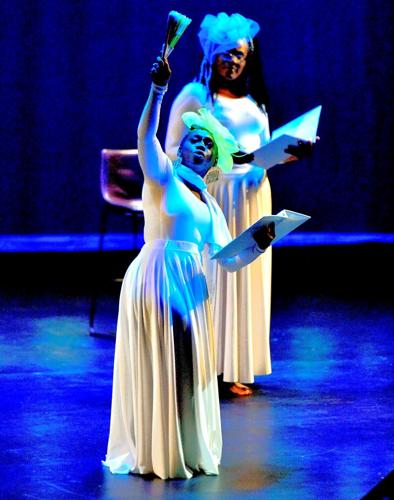 Pacia Anderson and Leah Stewart perform the works of St. Louis poet Shirley Bradley Price LeFlore. during the Rivers of Women production at the Grandel Square Theatre Fri. May 6, 2022. 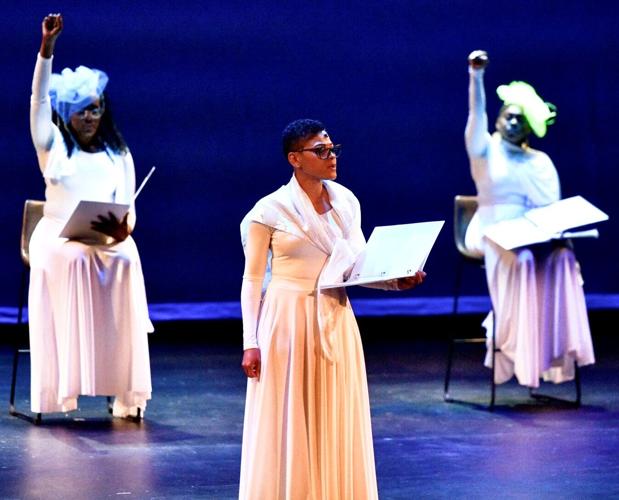 Cheeraz Gorman reciting a poem with Pacia Anderson and Leah Stewart in the back ground during the performance of works by St. Louis poet Shirley Bradley Price LeFlore.

The evening featured a performance of Rivers of Women, a compilation of poetry and songs LeFlore Ituen wove together from her mother’s words.

In her opening remarks before the show, Lyah Beth LeFlore-Ituen declared that the spirit of Shirley Bradley Price LeFlore was in the building at the Grandel Theatre for the Rivers of Women Fundraising Gala.

As the ensemble of women performed the production for which the gala was named, it sincerely felt like it. Two days before Mother’s Day, LeFlore-Ituen and her sisters Hope Lynne Price-Lindsay and Jacie Wynn Price called the region together to gather in their mother’s name for the inaugural gala for the Shirley Bradley LeFlore Foundation.

The evening featured a performance of Rivers of Women, a compilation of poetry and songs LeFlore-Ituen wove together from her mother’s words. She was assisted by Alerica Anderson, who provided musical direction and composed the show’s original score. Nicole “Pinky” Thomas choreographed the production.

Friday night’s staging was the first time the acclaimed show had been performed since LeFlore, a renowned educator, writer, performer and poet – and the city’s first Black woman Poet Laureate – became an ancestor. She passed away on Mother’s Day in 2019. LeFlore-Ituen confessed that the experience was bittersweet, but the sorrow gave way to celebration as LeFlore’s energy permeated the venue.

When Leah Stewart sang “Two Wings” from Suite 4 – The Healing portion of the production, to the right of the stage a woman a was compelled from her seat. She was so overwhelmed that her long hair swayed as she clapped and sang along for the entire selection. Eying the woman from her reserved booth to the right of the stage caused many including this reporter – to do a double take. Her silhouette was the spitting image of LeFlore.

It was her daughter Jacie Price. Their resemblance is uncanny. Earlier in the show LeFlore Ituen, who directed and produced Rivers of Women, made her way to the stage to perform.

“Put Cha Haints On Me.” She embodied her mother with the performance as she twirled her white broom skirt across the stage and delivered the rhymes with precision – and a delightful overload of sass.

“Sorcercize me if you must... work yo’ roots sho-nuf. ‘Cause I like the way you do my stuff.”

In addition to LeFlore Ituen’s featured appearance, the ensemble for the 2022 production included Leah Stewart, Amber Alexandria Rose, Cheeraz Gormon, Pacia Elaine Anderson, Essence Cunningham-Peoples. The latest staging of Rivers of Women also included guest vocalists Adrianne Felton King and Angel Riley. Each woman handled their respective roles in Rivers of Women with the utmost care and conviction – understanding the assignment of being a conduit for LeFlore generational-ode to the Black experience through the eyes and heart of women.

The evening began with a commitment to ensure LeFlore’s cultural contributions and efforts to cultivate the next generation of artists. “She impacted so many lives beyond those who arehere tonight,” said Dr. Beth Stroble, Chancellor of Webster University.

LeFlore was the first African American Assistant Dean of Students at Webster University, and the university is home to the Shirley Bradley Price LeFlore Scholarship. It was established for undergraduate students studying English

Literature, Creative Writing or African American Studies. Some of those students went on to grace the very stage where Rivers of Women was performed – including the late Jennifer Beavers-Wright. She was a core company member and later a member of the administrative staff for The St. Louis Black Repertory Company. The Black Rep called the Grandel Theatre home for many years.

Acclaimed stage, film and television star Jenifer Lewis has credited LeFlore with “saving her life” during her Webster days. “She said yes to students over and over again – and helped them see Webster not only as a place of access, but a place of success,” Stroble said.

“We are counting on people to say yes to students in the spirit of Shirley Bradley Price LeFlore.”

Based on the lengthy standing ovation, the people who experienced Rivers of Women, they don’t have any intention of saying no. The reception of the production’s latest iteration had “Shirley’s girls” filled with emotion. As all three took the stage to say farewell They delivered a heartfelt “thank you” to the audience for their attendance. Proceeds for the show benefited the foundation they helm in honor of their mother, a 5013c organization established to foster an interest in literature, music, theater and the fine arts by way of original programming through its Creative Arts and Expressions Lab.

“I hope you felt her soul,” LeFlore-Ituen said. “That was our intention – and through the foundation we are going to work to make sure that her words, work, life and legacy continue to inspire others.”

Details on the Shirley Bradley Price LeFlore Scholarship Fund can be found at https://webster.quadweb.site/

In Loving Memory of Geraldine Tapp