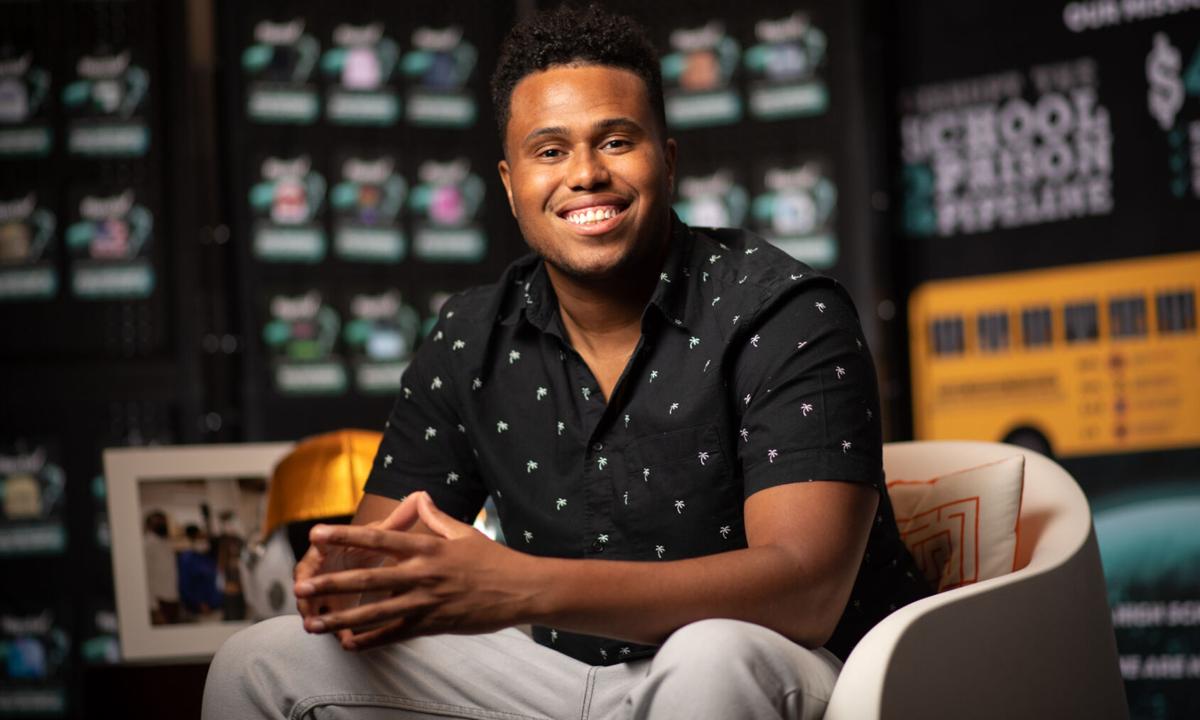 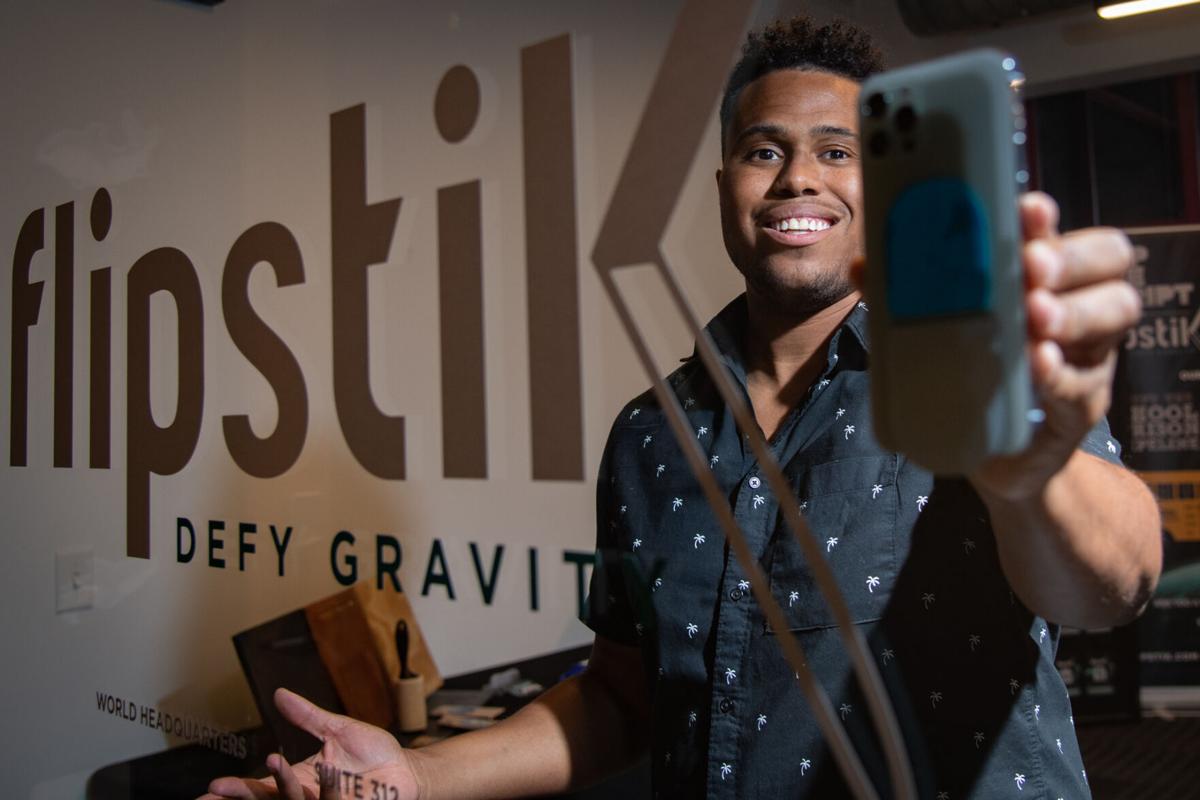 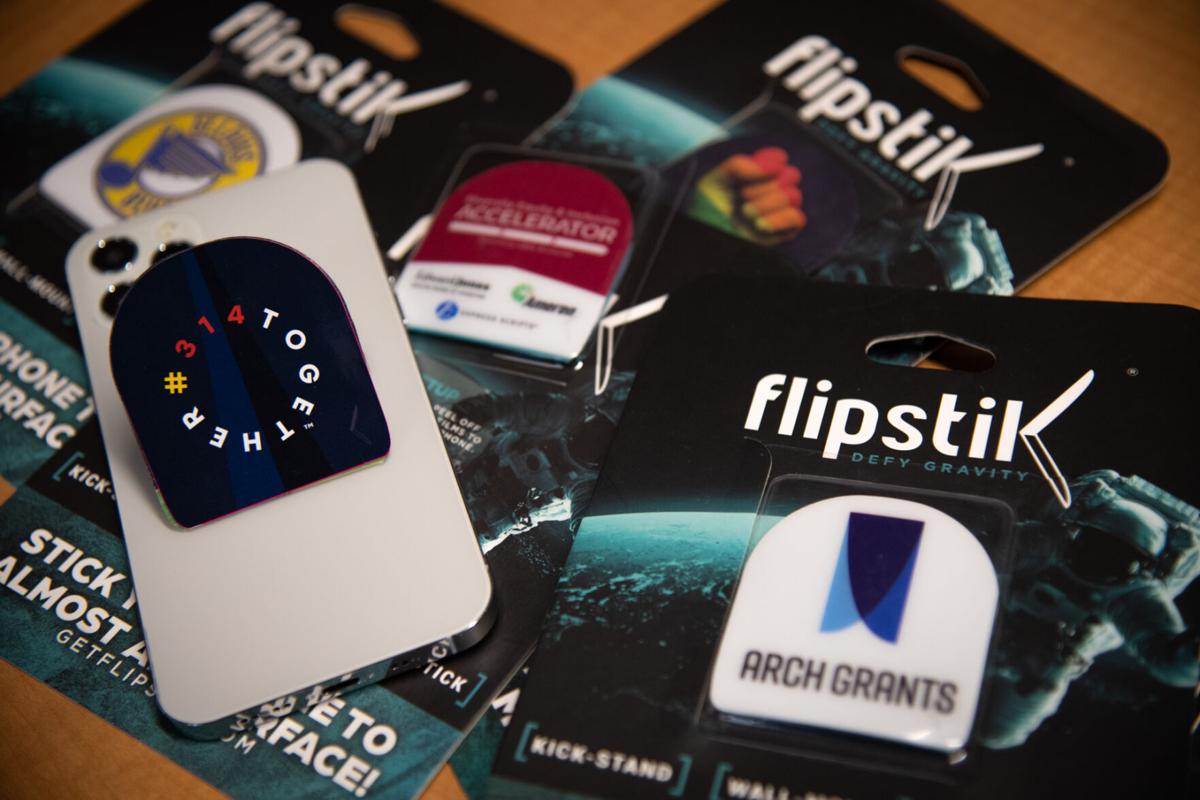 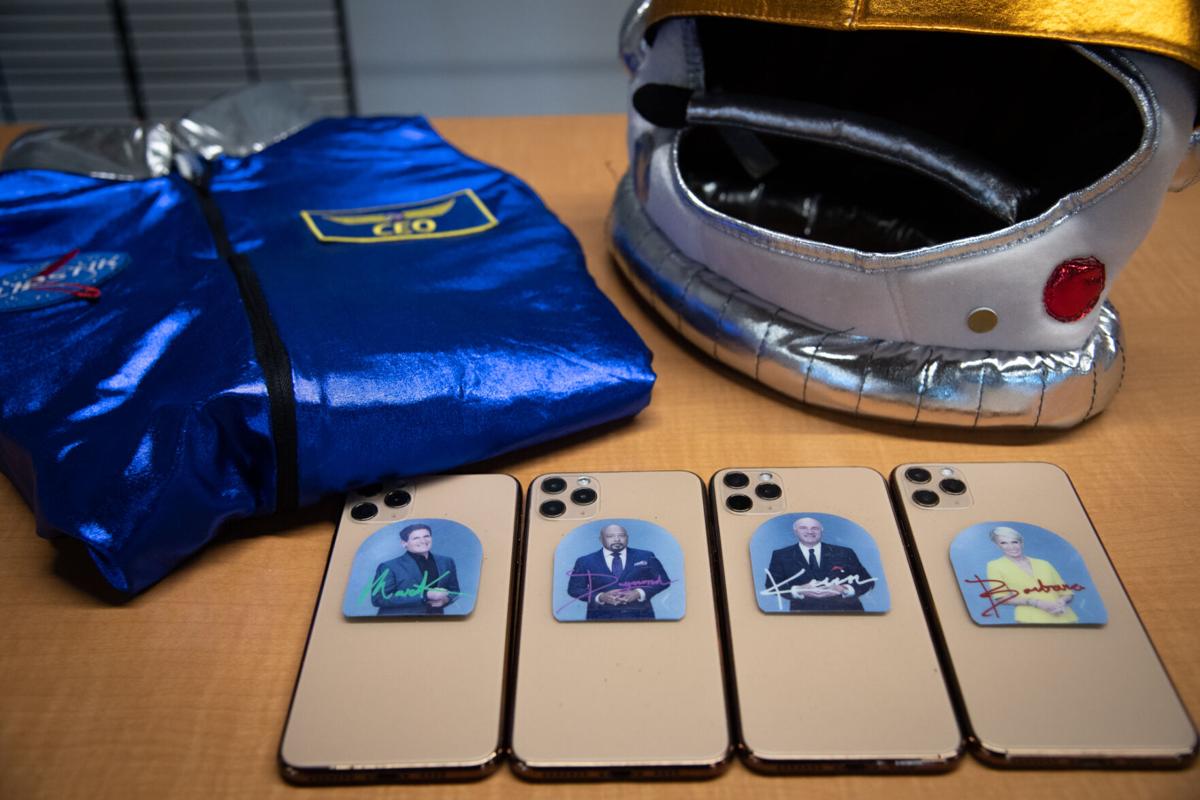 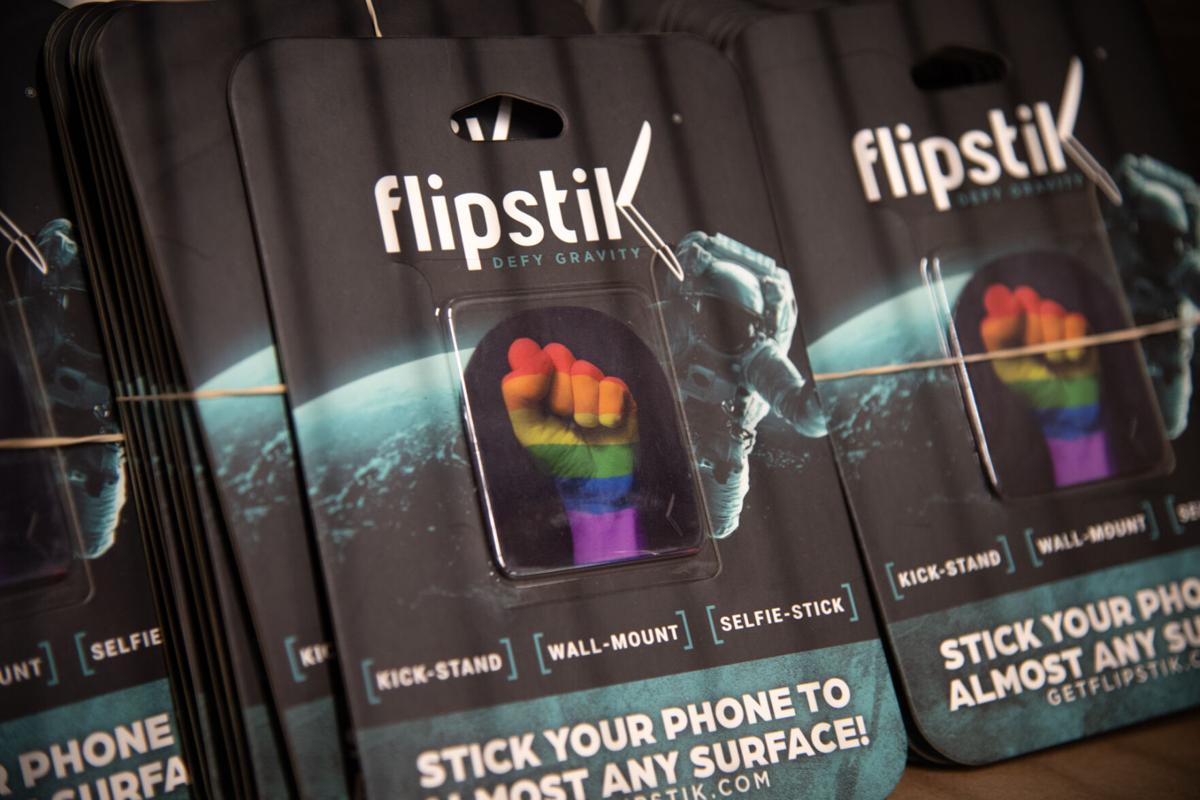 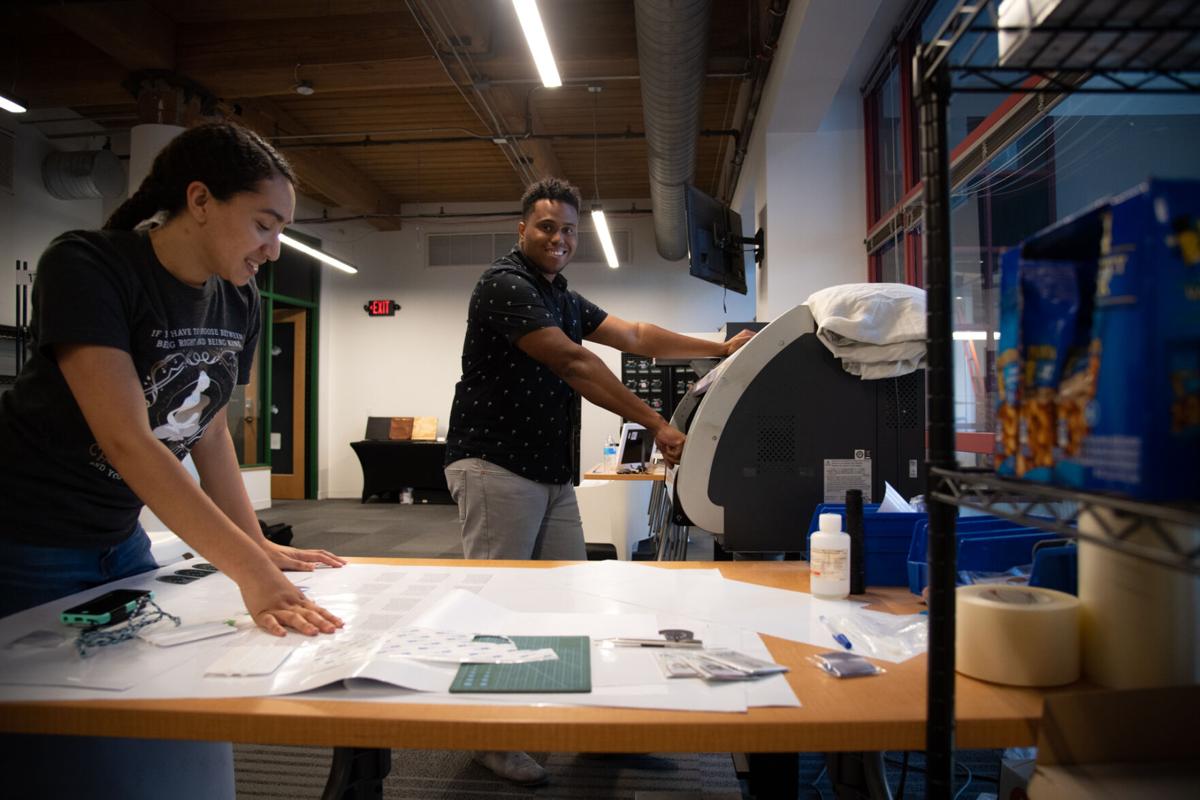 Akeem Shannon will tell you his product creates a moment of magic, particularly for skeptics, when he demonstrates what the Flipstik can do — whether on the side of the iconic Arch or on a glass wall in his office — as he pulls his hands away and the phone stays mounted on the surface, defying gravity.

The cell phone accessory is made of a NASA-researched double-sided and reusable adhesive material that is placed on the back of a mobile device and allows the user to mount it to a variety of surfaces over and over again.

It would seem that Shannon himself has also found a way to defy gravity with the rate and success of his entrepreneurial rise.

The St. Louis native was a part of the inaugural spring 2021 cohort of University of Missouri – St. Louis Accelerate’s newest program, the Diversity, Equity, and Inclusion Accelerator. Made possible by the support of anonymous donors and public commitment from Ameren Corporation, Edward Jones and Express Scripts, the accelerator’s aim is to provide underrepresented entrepreneurs with a non-dilutive $50,000 grant, along with an UMSL student as a paid intern, an experienced business mentor and eight weeks of development classes.

“That was an incredible program to be a part of,” says Shannon. “We had an entrepreneur come in and he had built up his business to a multi-million dollar business, and he was super engaging. He felt like someone I was actually learning something from, and over the course of the next eight weeks, there were way more speakers like that.”

Because of this, Flipstik sales grew substantially while he was in the accelerator.

“What was the most valuable thing for me personally beyond the course of the classes was the networking,” Shannon said. “You know, when we said we needed something, every member of the cohort, if they knew someone and they could get us to what we needed, they made it happen.”

He graduated the program with connections to big box retail stores and a local 3D printer to make his prototypes. He also established an in-kind legal partnership with Thompson Coburn and is still under the mentorship of Dan Lauer, founding director of UMSL Accelerate.

The DEI Accelerator hosts one cohort of six entrepreneurs each year. Bynum advises those who are unsure about applying for the program to go for it.

While the cohort is the most recent accolade for the St. Louis entrepreneur, Shannon is more widely known for his November 2020 appearance on ABC’s show “Shark Tank.” The show features a panel of potential investors who listen to entrepreneurs pitch their ideas and then decide whether to finance them or not.

But Shannon’s journey to getting on the show wasn’t a straight shot — the first time he applied to appear on Shark Tank in 2019, he made it pretty far in the process but was ultimately turned down by producers.

The entrepreneur then took his product to events like the Super Bowl and the BET awards, giving away Flipstiks to promote the product.

During this time, Shannon came across the REVOLT Summit in Atlanta, a hip hop event which also hosted a pitch competition.

Sean Combs (Diddy), rap mogul and entrepreneur, heard Shannon’s Flipstik rap.  He purchased a large quantity of Flipstiks while in Atlanta and Shannon was flown out to L.A. where he also met Snoop Dogg.

Little did Shannon know that in addition to catching celebrities’ attention with his rap, a Shark Tank producer also saw him perform and so Shannon received a call from the show’s casting department in February 2020. From there, Shannon made it on the show where he performed his Flipstik rap for a national audience and accepted Lori Greiner’s offer to invest $100,000 for 25% equity.

Before the success of Flipstik, Shannon was working a corporate job he disliked.

About two months into that position, his uncle, an engineer at NASA, told him about a special adhesive that was strong but also reusable by emulating the setae found on geckos.

Shannon kept thinking about it, and eventually realized it would be perfect for smaller electronics — like phones and tablets.

In late 2017 and early 2018 Shannon began researching manufacturers while applying for trademarks and patents.

The material itself cannot be patented, but he did patent his product — a double-sided adhesive with a flip cover.

“In the first hour, we passed the goal and we ended up doing around $15,000 in sales over our Kickstarter campaign, which was just a few weeks,” he said. “And these are all preorders before I had actually produced the final product.”

After shipping out those orders in August, Shannon began selling Flipstiks at festivals and other public events. And with a background in retail, Shannon felt he could successfully sell Flipstiks in a kiosk in the Saint Louis Galleria mall during the holiday shopping season.

And over the course of that two-month period, Flipstik did $30,000 in sales at just the one kiosk.

“And it just was a huge success, and so that was really the first real moment where we’re like, wow, this can really go places,” Shannon said. “Here we made all this money over the holidays at just one kiosk. And they were long hours, but it was definitely exciting.”

Currently, Shannon runs the business out of the T-REX building in downtown St. Louis but is looking for a more permanent home. And more growth is on the horizon —Shannon is in talks to get Flipstiks into larger retail stores soon and is also working on a contract with a local promotional company.

“We have just had so many awesome opportunities that have just really sprung up,” Shannon said. “Not things we were really looking for, but just where people find us. And I think that’s been the most rewarding part.”