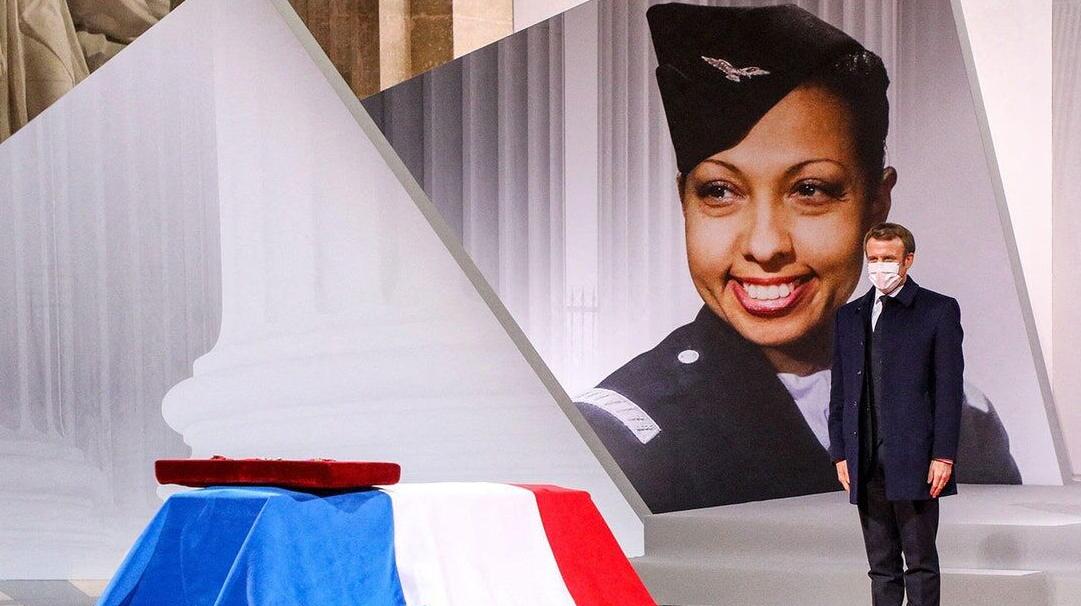 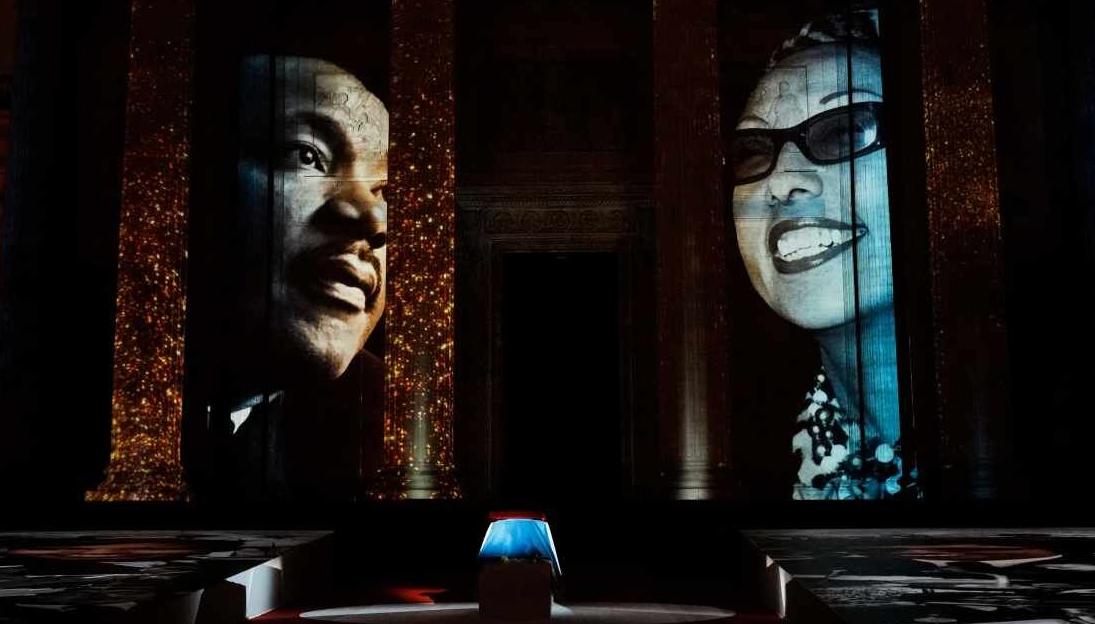 Images of Josephine Baker and Martin Luther King are displayed during a ceremony dedicated to Josephine Baker, the American-born French dancer and singer who fought in the French Resistance and later battled racism, at the French Pantheon in Paris on November 30, 2021. The icon of the Roaring Twenties, born in 1906 in the United States before adopting French nationality, is only the sixth woman out of 80 illustrious figures to receive the honor of being welcomed into the Pantheon, a grandiose neoclassical building in the heart of Paris, whose pediment proclaims "To the great men, the grateful fatherland. 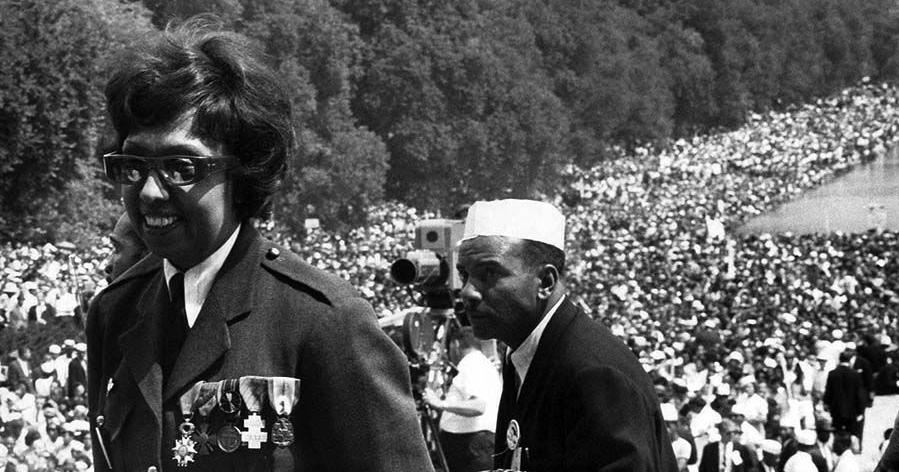 Josephine Baker at the March on Washington 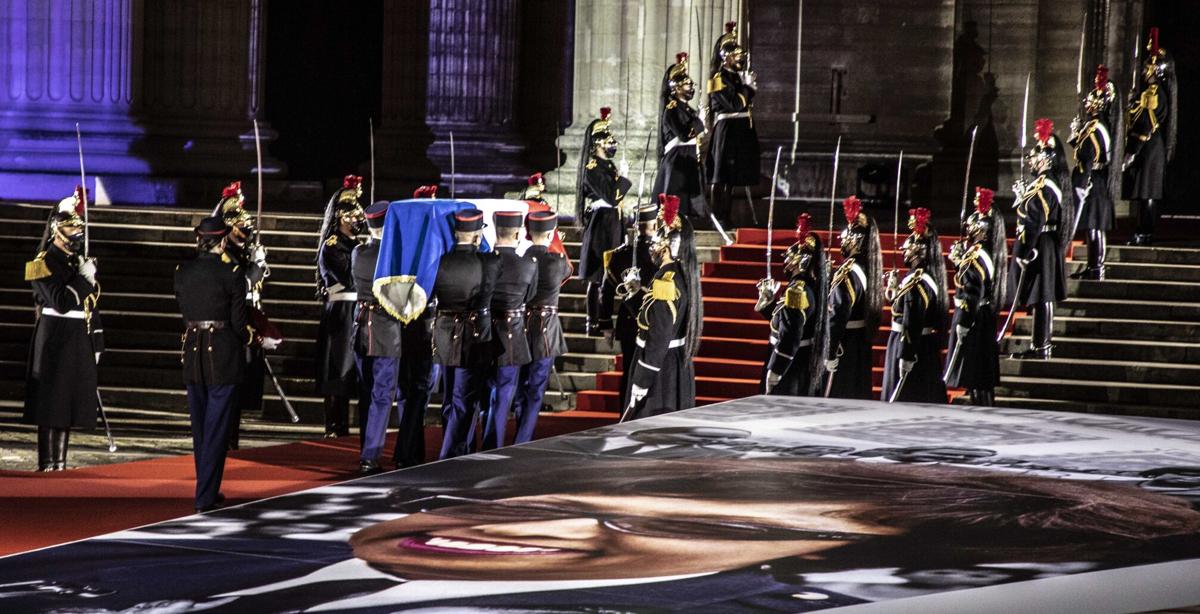 A coffin containing soil from Missouri, France and Monaco where Josephine Baker made her mark, sits at the front of  the domed Madeleine Church in Paris on Tuesday, Nov. 30, 2021. A photo montage tribute of Martin Luther King, Jr's 1963 March on Washington drew applause because Baker spoke at the march. Thousands of French citizens along with visitors from around the world came to Paris, lining the streets for the solemn service at the Pantheon, the final resting place for French luminaries. Baker is the first Black woman to receive the country's highest honor. Her body remained in Monaco at the request of her family.
The coffin is carried into the church. 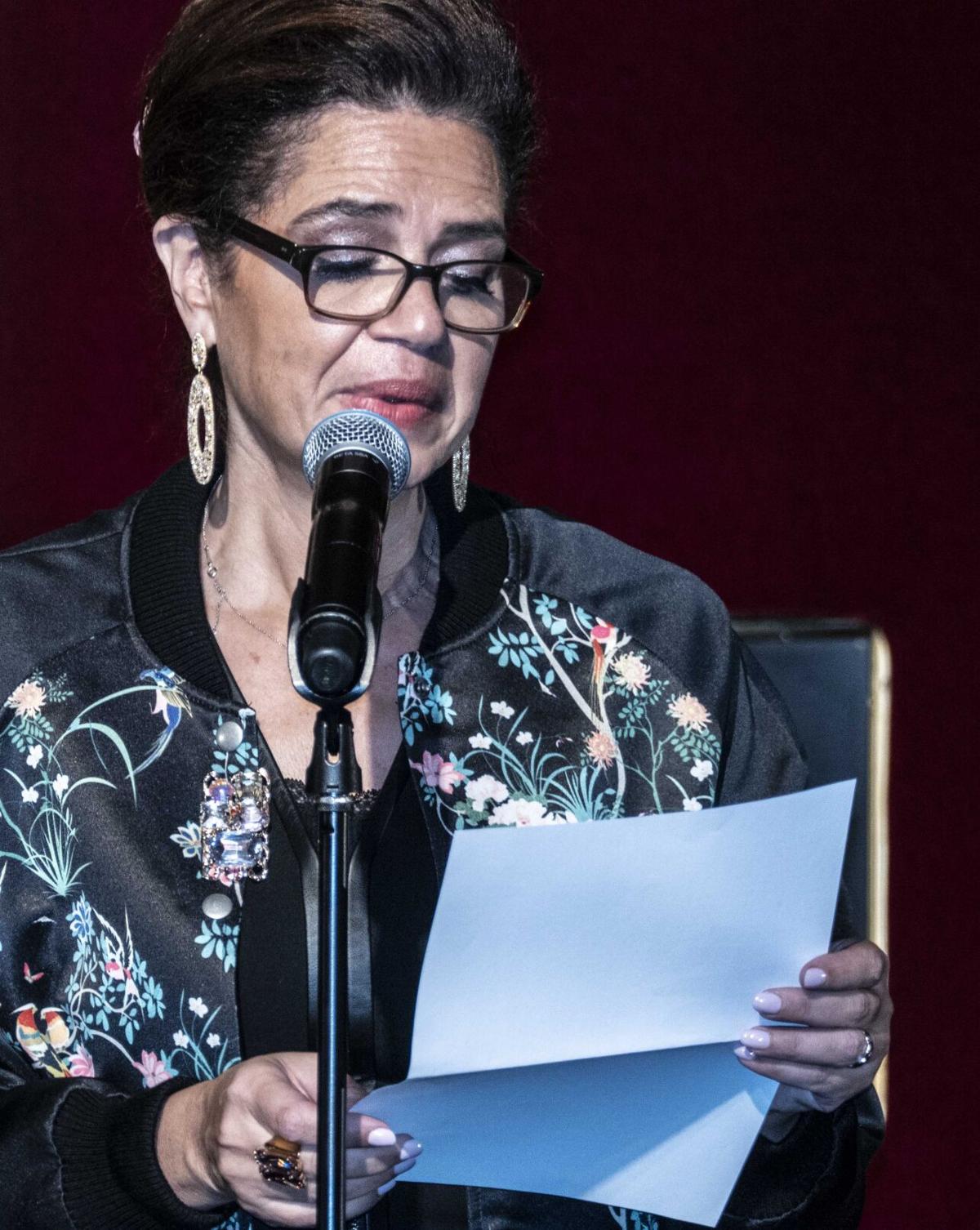 Ellen Wright-Herve', Richard Wright's granddaughter reads a reflection on Wright's Paris legacy at an event in honor of Baker's Pantheon Induction that followed the service. Wright, the noted writer, essayist, poet and novelist, moved to Paris in 1946. He knew Josephine Baker. Wright died in Paris in 1960.

Ricki Ricki Stevenson (far right) with members of the black Paris community and guests from the U.S. at the Pantheon event for Josephine Baker. Stevenson is CEO and Founder of Black Paris Tours, a company she started in 1997.

PARIS - Journalists hailed Josephine Baker’s April 16, 1975, funeral cortege as a final curtain call when thousands lined the streets of Paris to catch a glimpse of the hearse carrying her body to L'église de la Madeleine (the Church of Madeleine). Throngs stretched their arms toward her casket outside the church, rubber-necking to see her hearse and a motorcade draped in floral arrangements meandering through the theatre district where she performed in Paris during the early 20th century.

Now, present-day, like many, I traveled to Paris for Baker’s encore performance. I simply had to attend, and not even the latest strain of COVID-19, Omicron, spiking the pandemic’s stats around the globe, could keep me from Baker’s final bow at the grand Panthéon monument atop Montagne Sainte-Geneviève in the Latin Quarter. This is France’s most hallowed resting place for French luminaries. Black expatriates who live in the City of Light were joined by many from the U.S., like me, who boarded Thanksgiving weekend flights and braved the chilly weather for the solemn event.

French President Emmanuel Macron remarked of the St. Louis native, “There is no greater French woman than you.”

I was not yet born in 1952 when Baker gave a homecoming concert at St. Louis’ Kiel Auditorium Convention Hall for any patron who could buy a ticket. She refused to perform inside segregated venues. As a youth, I reveled, reading about Baker in Jet and Ebony magazines in the 1960s. Following her death, I combed the archives of the Chicago Defender, Pittsburgh Courier,the Amsterdam News, and the NAACP’s Crisis magazine, reading accounts on Baker chronicled by Black press correspondents stationed in Paris during World War II.

I was only a few years out of high school when Baker died of a stroke 46 years ago. She was 68. No longer living in St. Louis, I nonetheless, remember clamoring for prose and tributes of Baker’s death in Black media. Now, armed with my St. Louis American press credential, I carefully composed photographs that I had taken and felt would resonate with a Black long-time publisher/editor of the St. Louis American, who gave me a Normandy High School sophomore who could only afford a second-hand pawnshop camera, a press credential, and the opportunity to work for their family enterprise.

My fascination with Baker, the beloved Black Venus, stretches beyond her illustrious 50-year career as a cabaret singer and sometimes scantily clad performer. My obsession centered on reading about a woman from the Mill Creek Valley neighborhood of St. Louis.

Historian Tyler Stovall, writing in African Americans in the City of Light, said, “Freda J. McDonald, who everyone called Josephine, grew up in conditions of the most terrible poverty. Her family lived in a one-room shack infested with bugs and rats, and the young girl soon learned to look for food in trash cans.”

I was haunted by the fact that I’d once read about Baker’s poverty and was now watching thousands of diverse Parisians line four blocks of cobblestoned streets that had been red-carpeted for her memorial. The crowds stretched from Luxembourg Gardens on the city’s West Bank to the Pantheon. Her coffin, carried by Air Force personnel, made frequent stops where recordings of her voice punctuated the air with excerpts from her speeches and beloved songs. I got choked up hearing her “J’ai deux amours” (Two Loves).

On the eve of Baker’s pantheonization, a metro station near Bobino Cabaret, where she last performed, was renamed in her honor. In fact, Baker, who came to Paris in 1925 as a singer and dancer, would used her fame to bring voice to a plethora of human and civil rights causes throughout her life. She adopted 12 children she fondly called her Rainbow Tribe, and 11 of whom attended the service.

I’ve been coming to Paris for more than four decades and never tire of learning about the cohort of Black men and women artists, writers, photographers, singers, and musicians from the U.S., who found refuge and acceptance in Paris that seemed in stark contrast to America’s brand of racism.

I was not alone at this week’s event, in fact, Devon Moody-Graham from East St. Louis remembers herself, an eight-year-old student at AM Jackson Math and Science Academy, writing a book report on Josephine Baker. Inspired by Baker, Moody-Graham took French classes in high school, but her classmates could never raise enough money for French immersion trips. However, that did not stop her as she said, “I love all things Josephine Baker and Paris.” Moody-Graham said she has traveled to Paris for four consecutive years now. In March, she plans a trip to Paris for her son Gregory, 17. She will lead a women’s empowerment trip next June, and it will connect Black women entrepreneurs with Black Parisian businesswomen.

Kathleen Dameron was born in St. Louis and raised in East St. Louis. She is a multicultural training facilitator who has been living in Paris since 1976. She commented on the importance of France honoring Josephine Baker. “Black women tend to get written out of history. They disappear. They don’t exist,” she said. “It’s important right now to do this honor. Josephine Baker was [much more] than an entertainer in a banana skirt. One of the things that moved me so much this evening was hearing her say, ‘France gave me everything. I will give my life for France.’”

And indeed, she did.