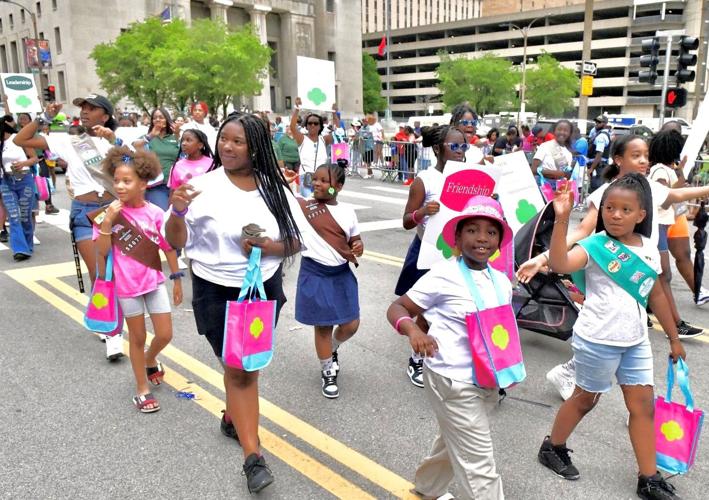 The Girls Scouts of Greater St. Louis participated in the Annie Malone May Day Parade Sunday, May 15, after a two-year absence. The second-largest, African-American parade in the country was sponsored by NIKE for the first time this year. 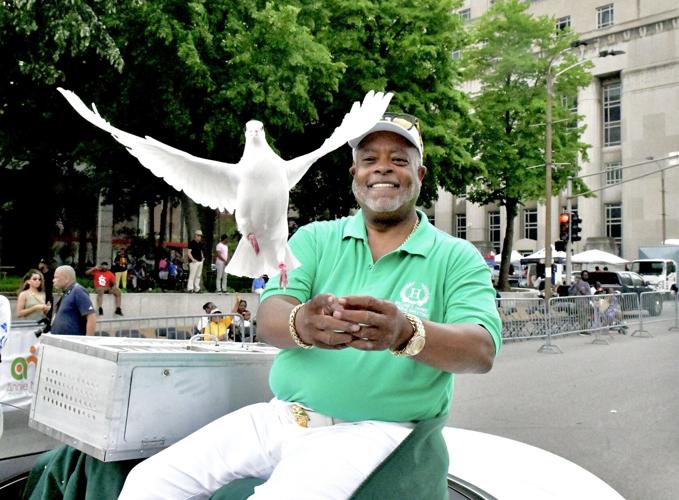 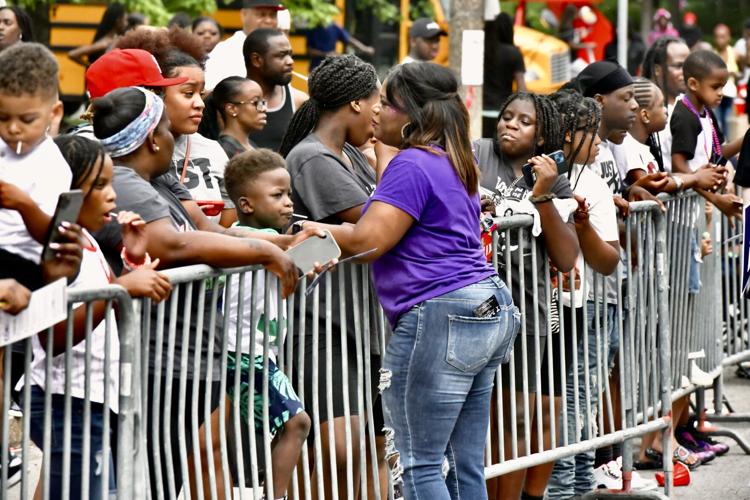 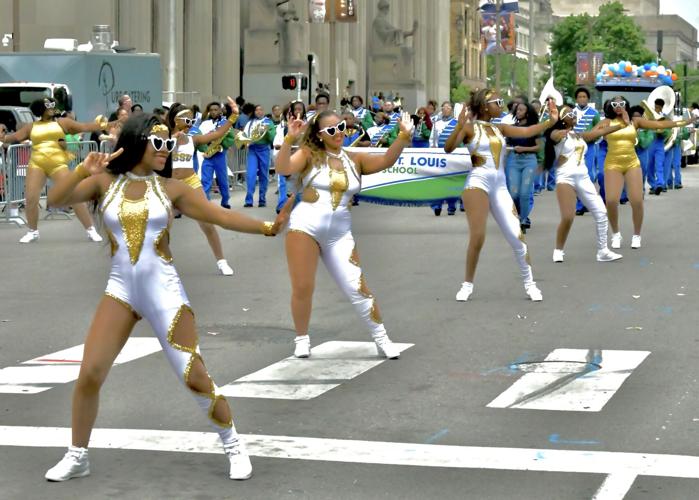 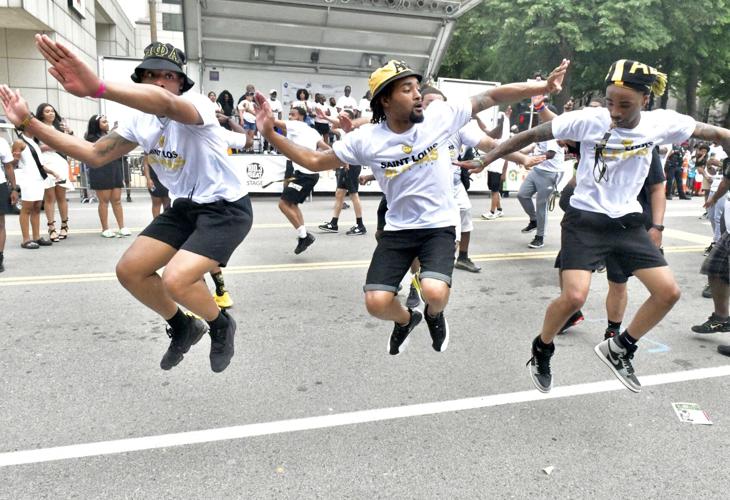 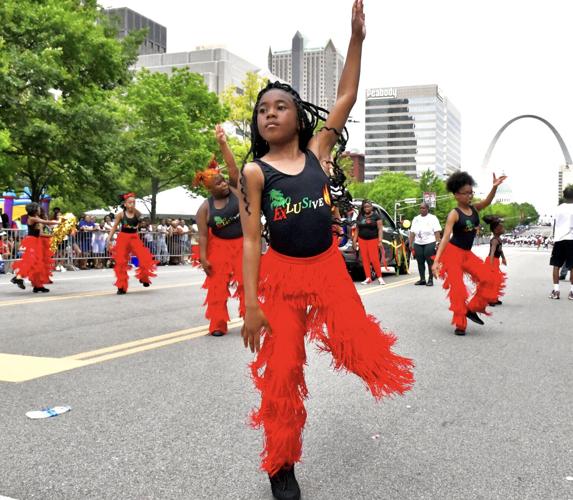 As Black St. Louis lined both sides of Market Street for more than a dozen city blocks, there was a special feeling permeating downtown. May 15th marked the first in-person Annie Malone Children and Family Services Center Annual May Day Parade since the COVID-19 pandemic began in 2020.

“It felt amazing. I have no words to describe it,” Congresswoman Cori Bush said.

The parade was held virtually for two years – a valiant effort to keep the century-plus tradition going, and to keep resources coming in from the organization’s biggest fundraising initiative.

Sunday afternoon served as a reminder of the one-of-a-kind experience the second largest annual African American parade in the nation provides for culture and the community. As the 112th parade kicked off, 2022 Grand Marshal BJ The DJ of iHeart Radio was eager to get the thousands in attendance hyped up.

He broke into an old-school dance as Bobby Brown’s “Don’t Be Cruel” blasted through the speakers. “Go BJ,” the crowd responded. “Go BJ!” The tone was set by the time he danced his way to the announcer’s stage, where he also served as co-host with Jess Live of Hot 104.1 FM.

What went on for the next few hours was an interactive exchange of fellowship that highlighted how the May Day Parade captures the soul of the city while keeping the spirit of Annie Malone’s philanthropy alive.

“I am here to stand to say that I’m so glad that we are back out in the street again,” said Congresswoman Cori Bush. “Because this parade, supporting Annie Malone, supporting our children, those who need us the most, is the first thing we should be looking out to do.”

Bush was fighting back emotion as she addressed the crowd as the first African American woman to represent Missouri’s First Congressional District.

“It felt amazing. I have no words to describe it,” Bush later said of her first appearance at the parade as a member of Congress.

She was often seen breaking the parade line to personally greet constituents. Sometimes the conversations went on to the point she had to be pulled in so she wouldn’t fall too far behind and impede on the flow of the parade. “Seeing all of the organizations, and the people and the groups – that’s St. Louis strong,” Bush said. “And your congresswoman loves you.”

Bush was only one example of the Black girl magic that was illustrated at this year’s parade. The pioneering parade namesake would have been especially proud.

Recently appointed CEO Keisha Lee received A-list celebrity treatment upon her arrival to the announcing stage. She emerged from a convertible with her fitted skirt, pink stiletto heels with a huge bow at the ankles that matched the personalized Annie Malone t-shirt with “SHE-EO” custom wording printed on the back.

As she stood up front, she, and Mayor Tishaura Jones – the first Black woman mayor of St. Louis – shared one of those, “I see you, girl” greetings as Jones made her way on the parade route.

“We are back!” Parade chair and Annie Malone Children and Family Services Center board member John Bowman declared as he introduced Lee.

“We are back and under new leadership – and we are in good hands.”

Lee professed her love for the parade and the energy it provides.

“This is our parade – not my parade, not just us – this is all of ours,” Lee said. She was instantly ready to get the party started. “Where the music?” Lee asked. “DJ, give us just a little something to get us together.”

DJ Stew cued up Too Short’s, “Blow The Whistle.”

As the song played, Harris Stowe-State University President Dr. Latonia Collins Smith proceeded to shimmy to the beat as the Harris-Stowe royal court made their way down Market.

Only at the May Day parade can you see a college president unapologetically grooving to the beat.

“I see you soror,” said Jess Live, who is a member of Alpha Kappa Alpha Sorority Incorporated. “Skee wee, soror!

The event was “so St. Louis” from start to finish – both from the presenters and parade attendees. True to form for the May Day parade, observers had no issue with offering feedback with the expectation of full response and attention.

“Come on Kappas. Y’all better show me something,” a young woman yelled out as members of Kappa Alpha Psi rode by on a flatbed and took a pause for the cause near 15th Street.

More than likely they needed to take a breather after strolling from the beginning of the parade route near Market and Jefferson. A few stood up and jumped right into a party step that was heavy on the shoulder action. “There we go. That’s what I’m talking about,” she responded.

The energy expectation went both ways.

“Just throw ya’ hands in the air, and wave ‘em like you just don’t care,” BJ The DJ said to the crowd. “If you believe in Annie Malone, somebody say ‘oh yeah.’”

He pointed the microphone back and forth in the direction of both sides of the street, and parade goers were all too eager to oblige.

“Oh yeah,” the crowd yelled in unison as their arms went up.

They shouted as if they had been waiting on the moment for the entire two years that the parade was on in-person hiatus.

To fulfill God’s plan, plan ahead 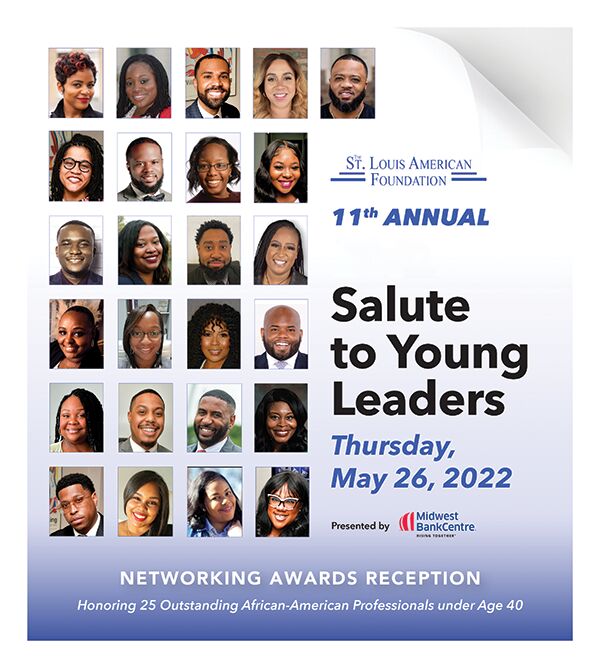