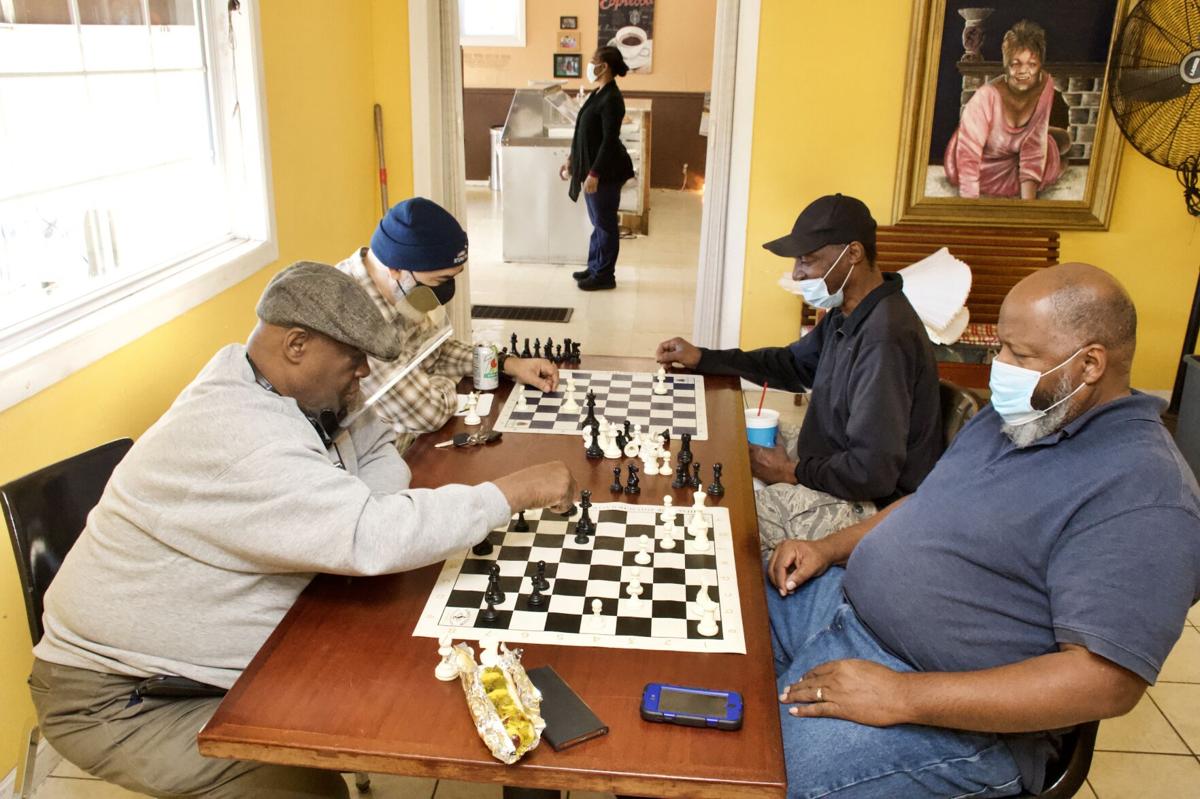 Billie's Coffee shop in East St. Louis, Illinois, is where chess enthusiasts Richard C. Bolden, Brian Clay, Harvey Jackson and Montez Bailey come together for friendly competition and bragging rights. In the background is shop owner Gina Jackson.  The shop is located in the 7300 block of State Street. 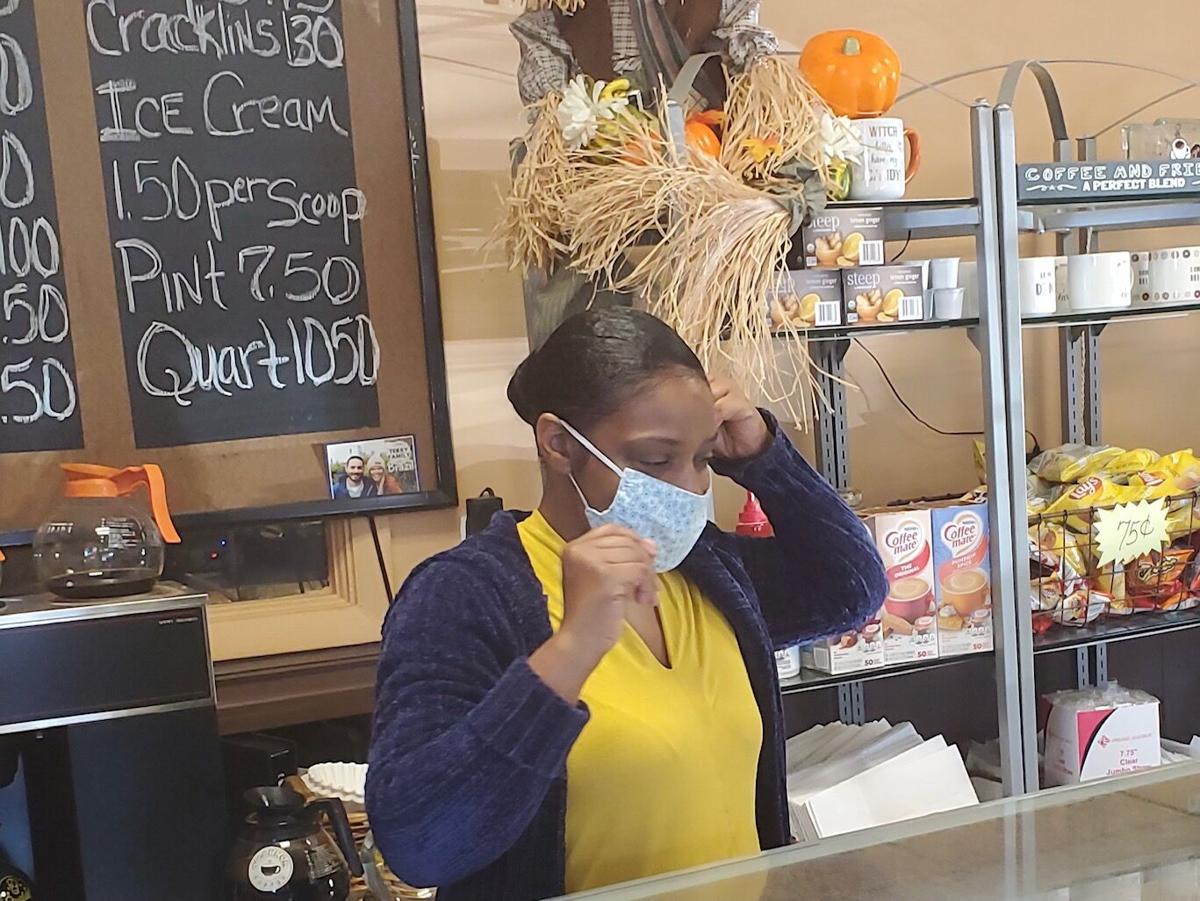 Gina Jackson gets ready to welcome the regulars at Billie's Pastries.  The East St. Louis coffee shop was established by Jackson's mother Billie Jean Miller, in 1980.

The square, beige-colored, brick building seems to be the only operating business on the block. Next door, a yellow-brick, abandoned building advertises long-gone services: “Beauty Shop;” “UNLIMITED Talk, Text & Data: $24.99,” and a hand-painted sign above a broken garage door that reads: “Car Wash.”

The building at 7301 State Street in East St. Louis is among the many boarded up businesses and homes along the State Street strip. Billie’s Pastries, however, is one of the survivors. Above the door, a dark brown banner reads: “Billie’s est. in 1980.” Below it, a sunflower, yellow placard proudly proclaims: “Celebrating 40 years of Business in East St. Louis.”

It’s almost 8 am. According to the Internet listing, the store should have been opened an hour ago. A car pulls up and a woman approaches it. “The owner will be here in a few minutes,” the woman with a glittery gold and black face mask explains.

“Sometimes they deliver the donuts and sometimes she has to go pick them up,” the faithful customer explained to a reporter.

Within minutes, Gina Jackson, 53, arrived, exiting her SUV with about six boxes from Pharaohs Donuts in downtown St. Louis. Jackson is the youngest of Billie Jean and Henry Miller’s nine kids. Her mother, Billie, the founder of the shop, is 84 years old. She doesn’t work at the shop like she used to.

“She can’t stand all day like I can,” Gina said.

Inside, Jackson methodically goes about her daily routine. In moments, four steaming decanters of coffee sit on her Bunn commercial coffee maker. The boxes of glazed donuts, apple fritters and twisty creations have all been placed under the glass counter. One by one, customers stream in.

Jackson seems to know how each customer takes their coffee. Without asking, she presses the pump of oversized Coffee Mate containers, knowing who wants French vanilla, salted caramel, pumpkin spice, or any other flavor.

“When you come here, you’re home,” said Geneva Stokes, 77, the customer from the parking lot. “It’s like that TV show, ‘Cheers,’ where everybody knows your name.”

Stokes has known Billie since childhood. “Our families go way back. We’re from the south end of East St. Louis, “like everybody else,” she added.

“They were in all walks of life,” Stokes explains. “Preachers, teachers, social workers, you name it,”

Jackson said her mother opened the shop with the specific purpose of providing a place where locals could gather and talk:

“Mom was involved in the community. So, she built this business on the concept of ‘coffee and conversations.’ It’s where local people can come and actually discuss things. It’s good to have a place where we could come and just conversate.”

The conversations stopped for a while when the coronavirus started to spread and businesses had to abide by strict safety mandates. The shop closed for two months and Jackson said it took a bit longer for her customers to realize they had reopened. But, she added, “our customers are loyal. They came back.”

Forest Gerald “F.G.” McGraw, 77, is one of those come-back customers. The retired construction worker sat at a table marking, then clipping sections from newspapers.

“These are football stats. It’s a hobby of mine,” McGraw confessed. “I’m getting ready to make a bet on the Super Bowl.”

McGraw pulls back four knobby fingers to detail the benefits of Billie’s: “First, it’s the atmosphere. Second, it’s the girl who runs this place, Gina’s personality,” he said, referring to Jackson. “Third, it’s a place where people can play chess. Fourth, it’s the gossip. Anyone who hangs around here knows what’s going on and what’s happening.”

McGraw introduces James Reeves, also in his late 70s. Reeves said he comes to the pastry because he enjoys “the discussions.” According to McGraw and other customers, Reeve is the unofficial chair of what they call the “philosophy table.”

“It’s where we sit back and solve all the world’s problems,” Reeves jokes.

“We discuss everything from A-to-Z, taxes, politics, you name it, and we can handle it,” Reeves interjects.

That’s what’s so special about this place, Dancy adds: “This is one of the few places in the world where you can disagree but not be disagreeable. All of us are friends, we have differences of opinion, but we don’t allow that to affect our personal relationships.”

There’s no disagreement among the men about their fear of the coronavirus.

“COVID got me scared, got me staying in. This is the only place I go. Only time I get nervous is when people come in that I don’t know, like you,” Riley said to a reporter, pulling his face mask up to cover his nose.

Dancy expressed a similar sentiment: “I come in the morning but when they get a few people in here, I leave. I don’t want to catch it. If I don’t know ‘em, I don’t talk to ‘em.”

When asked about new restrictions due to a rise in COVID-19 infections, Riley was skeptical:

“It’s too late. It’s out already out there,” he said. “Only thing that’s gonna help us is that vaccine they talking about.”

Barring another government shutdown, Jackson said she’s prepared: “I’ve adjusted. People must wear their masks. We have these big bottles of hand sanitizers all over the place. I have plenty of professional strength disinfectant that I use to wipe everything down.

“If they shut us down again, we’ll just have to allow people to come and go. That’s a shame, though, because my base is people who come in, sit down and just talk.”