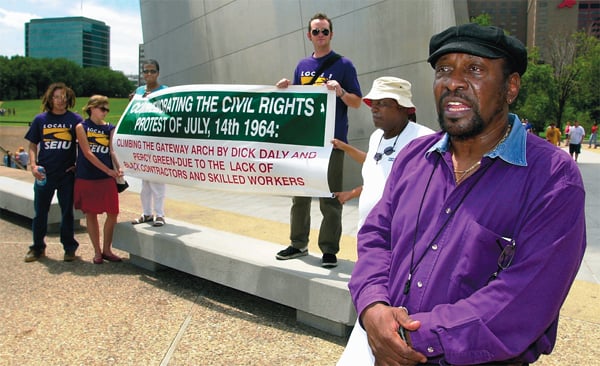 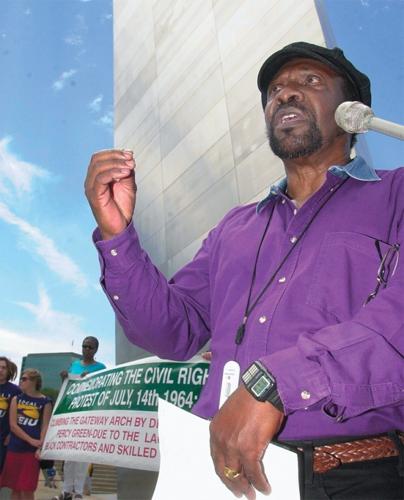 On July 14, 1964, Percy Green II did what most St. Louis residents have pondered at least once. He climbed up the side of the St. Louis Gateway Arch.

He did not put suction cups on his hands or scale the side from a dangling rope, as some might have imagined.

The Arch was still under construction in 1964, so Green and a white college student, Richard Daly, climbed up the ladder that was meant for the workers. They climbed to about 125 feet high and then stayed up there for five hours as an act of civil disobedience.

Their goal was to make the community aware that no African-American workers or contractors were hired for the Arch project. They succeeded. Within minutes, the media swarmed the Arch grounds.

Green's photo hangs inside the Arch with other historic moments in the Arch's making. On Oct. 30, 2010 the Jefferson National Parks Association celebrated the 45th anniversary of the completion of the Gateway Arch. Those who helped build the Arch were asked to come and speak with the public about their experience. Green was not invited to share his story.

In a recent interview with The St. Louis American, Green described that historic day.

"We were not concerned or conscious of making history," he said. "We were just trying to be effective in our protest to expose racial discrimination on a federally funded project."

At the time, the 29-year-old Green worked as an aerospace and aircraft manufacturer at McDonnell Douglas (now Boeing). He was also the chairman of the employment committee for the Congress of Racial Equality (CORE), a community action group.

Green had heard from the black community that the contractor for the Arch, MacDonald Construction Company, was not hiring African-American contractors and workers. About two weeks before the Arch protest action, Congress passed the 1964 Civil Rights Act, which forbade discrimination on the basis of race or sex in hiring, promoting or firing, but would not become effective until a year later (1965). And the project - the tallest U.S. monument, costing $13 million - received federal funds. The protesters felt it was a prime project to exercise the law.

Green and other CORE members first met with MacDonald representatives.

"They were saying that the work there was technical," Green said, "and if we could find them some qualified black workers that they would consider hiring them."

That was not a sufficient answer for CORE members. The group demanded that MacDonald bring its African-American workforce up to 10 percent within 10 days.

When the contractors did not meet the demands, Green and others decided to act. Daly and Green went on a "reconnaissance" mission a week before the protest, Green said. The two attempted to walk onto the job site and touch the Arch. They wore regular work jeans, Green said. So Daly and Green were able to get to the Arch without being questioned.

On the day of the action, CORE members staged a "decoy" picket line in front of the Old Courthouse at noon. The picket not only served as a distraction, but it also put the "accomplices" in a strategic position to see Daly and Green in action. At the time, there were telescopes for tourists to look at the Arch construction from the courthouse. So the picketers used the telescopes to watch for Green and Daly.

When Green and Daly walked onto the grounds, it was lunchtime for the workers. Green figured that they would have a better chance of getting to the ladder while the workers were eating. They also used a little psychology to squash suspicions - Daly walked a little ahead of Green.

"If they were to see me, a black man, walking ahead or us walking at equal, then it may have caused suspicions," Green said. "If they saw the white guy walking ahead and me lagging somewhere behind, psychologically it would give them the impression that white guy was in charge and he was bringing me on the job."

When the two finally got to the ladder, the workers were too far away to reach them. They climbed up 125 feet on the 300-feet ladder and then waved to the picketers. When the picketers got the signal, they immediately told the news media.

"That's when pandemonium set in," he said. "The various news agencies were trying to get to the grounds to cover the action."

First, the police attempted to talk to the two protesters by going up an elevator that was next to the ladder. "They demanded that we leave," Green said. "We told them that the only time we were going to leave was when McDonnell Douglas adhered to the demands we made." The police soon found that it was no good talking and decided to "wait them out" on the ground.

At 5:30 p.m., Green and Daly finally climbed down because Green had to to prepare for work that night.

The police immediately told Green that he was under arrest. In the civil disobedience movement, activists were taught to "go limp and sit down" once the police stated that they are going to arrest them. That's what Green did.

"I sat down and eventually laid back, because if they want to arrest you, they would have to pick you up or drag you to the police vehicle," he said.

The whole time, Daly was just standing by watching the police take Green away. Finally, someone said, "What about him?" pointing to Daly. When the police told Daly he was under arrest, that's when he went limp and sat down as well.

A professional bail bonds person was waiting at the jail with bail bond, and Green was released at 10 p.m. He had just enough time to shower, dress and get to work by midnight.

Over a month later, on Green's birthday - Aug. 28 - McDonnell Douglas fired him.

They informed Green that he was just one of several people the company was laying off because of budget cuts. However, Green said, the company continued to advertise for workers in the newspaper.

CORE members decided to protest the company with a stall-in, where they parked trucks along the company's key arteries and paralyzed production.

A year later, Green applied for a job at the company but was rejected. He then sued the company in what became a landmark case in discrimination cases - McDonnell v. Green.

During the Arch and McDonnell protests, CORE as a group was beginning to divide. Some CORE members broke off to start the Action Council to Improve Opportunities for Negroes (ACTION), which Green founded and chaired for many years. It was more of a direct action group, which meant that they would initiate action in a moment's notice. They were effective because they could organize protests quickly and then dramatize why they were protesting, Green said.

Over the years, Green has participated in many acts of civil disobedience and been arrested more than 100 times. Yet, when asked about the acts that stand out as the most significant, Green named the protests at McDonnell Douglas being at the top of a long list because it led to a landmark case that allows for blacks and other minorities to prove unlawful discriminations across this country.