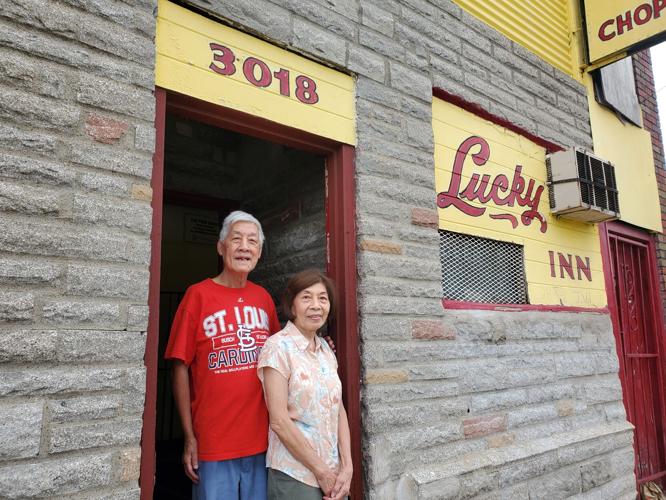 Lucky Inn Chop Suey has served its northside community for 90 years, and its owners, Robert and Wing Yee vow to keep doing business at 3018 Dr. Martin Luther King Drive until “we just close the door."

Lucky Inn Chop Suey at 3018 Dr Martin Luther King Dr. has been in business since 1932. The owner, Robert Yee, 84, inherited the now 90-year-old business from his father, Hing Yee, who came to America from Hong Kong in the early 1900s.

Hing Yee was an entrepreneur’s entrepreneur bouncing from city-to-city. From San Francisco, to Texas, to Mississippi, he took odd jobs that included selling coal and ice from wooden street carts.

Hing Yee followed a tradition that began in the mid-1800s when hundreds of thousands of Chinese immigrants came to the United States. Most were male manual laborers who arrived on the West Coast to do agricultural, mining, railroad construction and other low-skilled labor.

Robert’s father came to St. Louis during the Great Depression, the worst economic downturn in the history of the industrialized world. It was a time when the Ford Model A, Hudson7, Studebaker and Packard Twin 6 Roadsters were on the streets. Electric, caboose-like streetcars still clanged along city tracks before ending in 1966.

After arriving in St. Louis, Hing Yee followed another Chinese tradition institutionalized during the California gold rush in the late 1840s. According to Smithsonian Magazine, that’s when Chinese cuisine “emerged from the woks of early Cantonese American immigrants.” As Chinese immigrants migrated throughout the country, so did their cuisine which became popularly known as “Chop Suey” restaurants.

Hing Yee briefly returned to China In the late 1930s. He got married and fathered his only son, Robert, before returning to St. Louis. Yee brought his wife and son to the city in 1958, when Robert was 19. He spent one year at Central High School before enrolling at Saint Louis University with plans to major in electrical engineering. Then Robert’s dad got sick and he-the only child-dropped out of college to run the business.

Robert Yee recalls a thriving St. Louis neighborhood in the 63106-zip code area. Pointing west on MLK Drive, which was Franklin Avenue at the time, he said: “Back then people don’t have to go no where. In three blocks there were two grocery stores, a movie theater, one hardware store, clothing and furniture stores and a Velvet Freeze right across the street.”

Much has changed in the neighborhood since 1958, Robert said.

The Pruitt-Igoe housing complex was not far from Lucky Inn, and its decline is symbolic of the neighborhood’s economic downfall. It was a time of mass exodus as white residents migrated to new affordable housing in nearby county districts. As the population became Blacker, opportunities and resources became fewer.

When Robert Yee took over operations at the restaurant, it was still a bustling sit-down café with several employees. In the mid-1970s, Robert closed the dining room portion of the restaurant and switched to carryout only.

Inside the petite foyer, sits one booth and a tiny magazine table. Customers place orders through a cubby hole carved into the wall. The waiting area is separated from the back of the store by a wrought iron metal gate secured by a weighty, silver padlock.

Robert’s wife, Wing Yee, takes orders from the small window. They were introduced by family friends when Robert briefly returned to China as a young man in his 20s. The Yees were married in 1964 and have been together for 58 years. Their four children are all grown.

Tall, with a full head of snow-white hair, sporting a red St. Louis Cardinals T-shirt, Yee was prepared for our interview. Sitting at a 6x4 dining room table covered with a plastic floral print, he shared numerous framed photos and awards. One was of Yee and the late Veteran television news anchor, John Auble.The newsman visited Lucky Inn after hearing about his popular, signature dish: a Texas-style Chili.

“Oh, yeah,” Yee bragged. “We have customers from Bellefontaine Neighbors, Spanish Lake, and Wentzville that come all the way just for the chili. We’re the only one (Chinese restaurant) that knows how to do it.”

As if on cue, a customer walked in and ordered chili from Wing Lee. The owner said the woman was a “regular” who drives “all the way” from her job at White Castles on Natural Bridge and Kingshighway for the popular dish.

“Sometimes I ordered things and never get it,” Roberts recalled.

“We just cut back our hours to one or two days. Instead of six days, we worked four days, Robert said, adding: But our customers were very respectful. They ordered from the window. They wore masks, so we weren’t too worried.”

Back at the table, Robert shared more mementos. In one framed picture, he stands next to George Clinton with an inset shot of Bootsy Collins, members of the famed group, Parliament-Funkadelic, who visited the restaurant back in the 1970s.

Then there were two framed awards from the Missouri Court of Appeals honoring Yee and his wife,Wing Yee, for their dedicated years of service. Still another picture was of a gathering of high-ranking St. Louis police officers sitting at the floral print table. In the center of the group was a birthday cake the officers presented to Robert for his 80th birthday.

Robert is a bit of a hoarder. Besides the two, huge freezers and blackened stove burners under silver woks and large pots, the store is a mishmash of unrelated items. Two 70s-era pinball machines (one featuring Charlie’s Angels) sit next to piles of old newspapers and magazines. An old Southwestern Bell helmet sits atop the stack.

“I got all kinds of stuff,” Robert bragged. People have just given him things he explained. Walking to a cluttered shelf, Robert returned with two coffee cups. One had “FBI” stenciled on it and the other had former Police Chief, Joe Mokwa’s name on its front.

Police from the station a few blocks east of the restaurant are regular customers. They don’t usually call their orders in, Robert said, adding: “They just come in, sit down and eat.”

Robert said his customers have always been supportive, respectful, and even… protective. To emphasize this point, he shared a story from June 2020, when the downtown 7-Eleven was burned to the ground during the George Floyd protests.

“The next day I come to work in the morning, and I see two guys with guns in their belts,” Robert recalled. “I say, “hey, what are you guys doing?’ They say, ‘we trying to protect you. We don’t let anything to happen to you.’”

In its 90 years of operations, Lucky Inn has never been robbed or vandalized, Robert said. He and his wife feel lucky to have thrived and survived for so long. The couple attributed six generations of building a loyal customer base as the secret to their success.

A rebirth of sorts is on the horizon for the neighborhood thanks to the construction of the $1.7 billion, 97-acre National Geospatial-Intelligence Agency (NGA) headquarters at the intersection of Jefferson and Cass avenues. The expected staff of more than 3,000 will move into the new facility in 2026. With staff and visitors to the site, there’s no doubt that much-needed development and revenues will flow into the area.

Robert doesn’t expect to be around when the NGA site officially opens.

“I’ll probably be retired by the time they finish it,” he said.

The Yees’ children, who all went to college on scholarships — two to Washington University and two to Saint Louis University -- have no interest in taking over the restaurant.

“They are into technology,” Robert said.

The Yees don’t think they can sell the business.

“Nobody wants it,” Robert said. The neighborhood and the building are just too run down.

In a few years Lucky Inn will be no more and the Yees are OK with that reality.

“When we retire, just close the door,” Robert said, “that’s it.”

Peter paid a price for denial